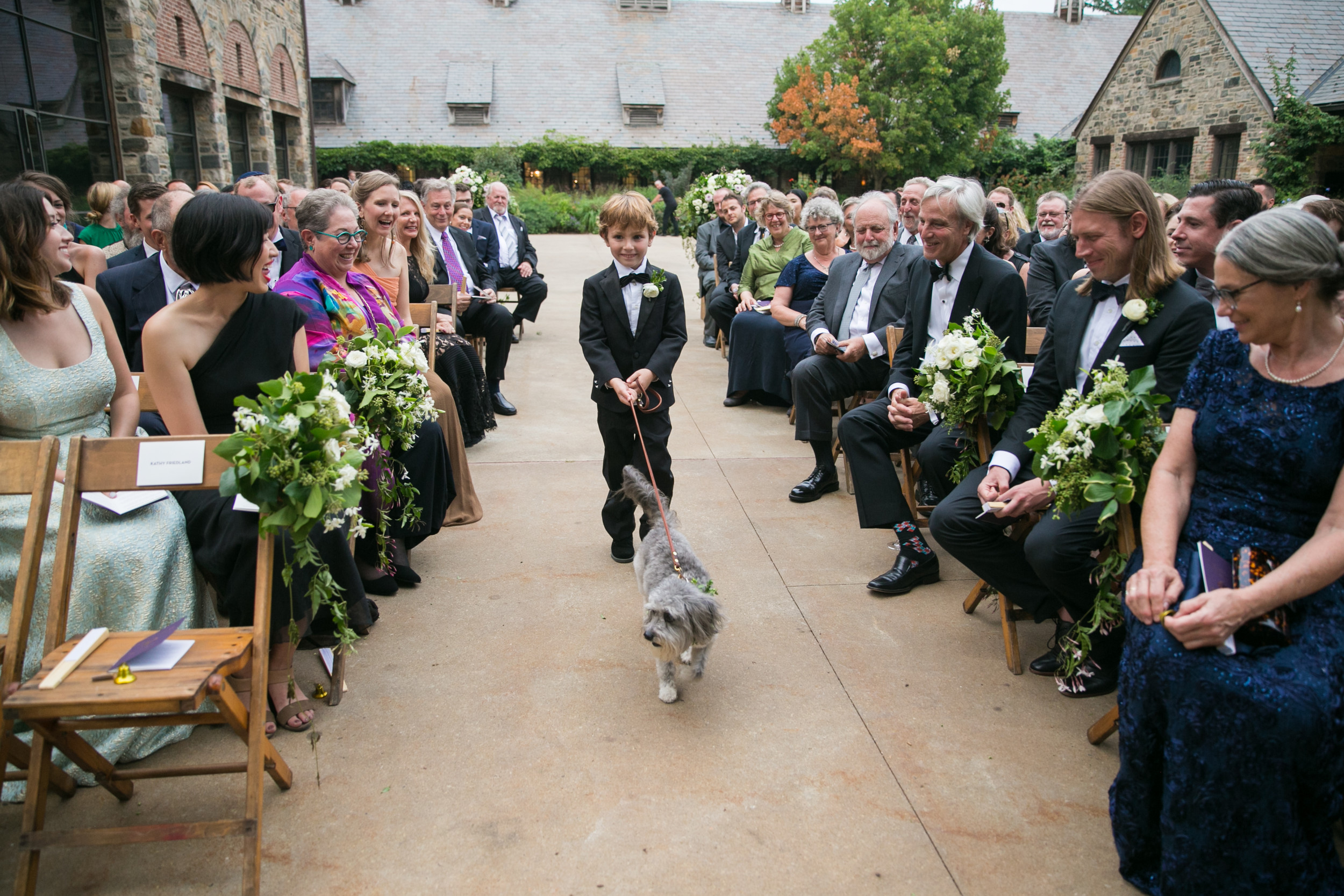 Wyatt Friedland walked Silver down the aisle at a wedding in Tarrytown, thanks to efforts coordinated by Pawfect For You, a dog babysitting business in Malverne.
Courtesy Sara Wight Photography 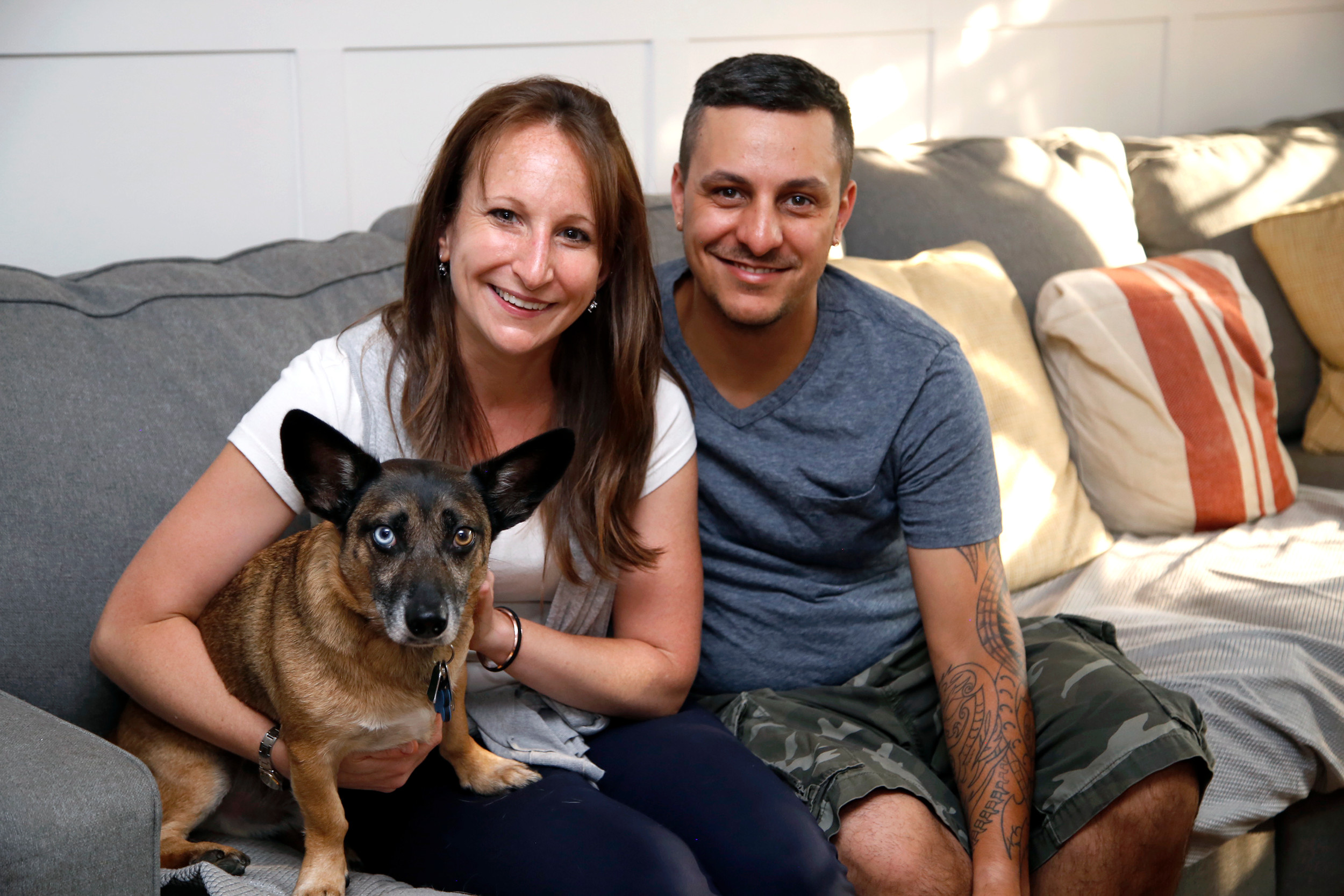 Veronica Silva, founder of Pawfect For You, with her husband Joey and their dog, JakeBear, in their Malverne home last week.
Sue Grieco 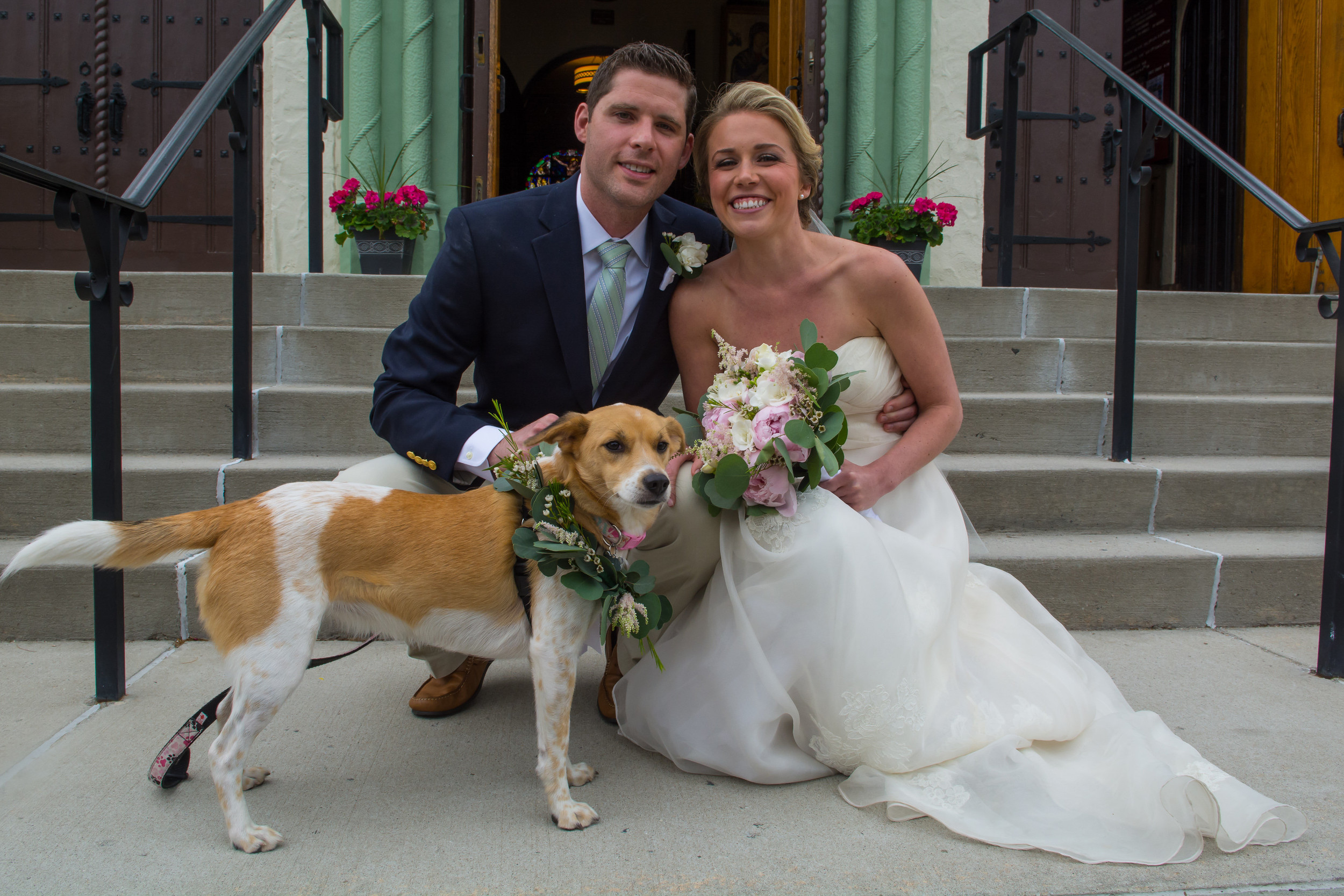 Caroline and Paul Carroll, above, with Lilly outside Our Lady of Lourdes in Malverne on their wedding day.
Courtesy Stephen Dobeck Photography 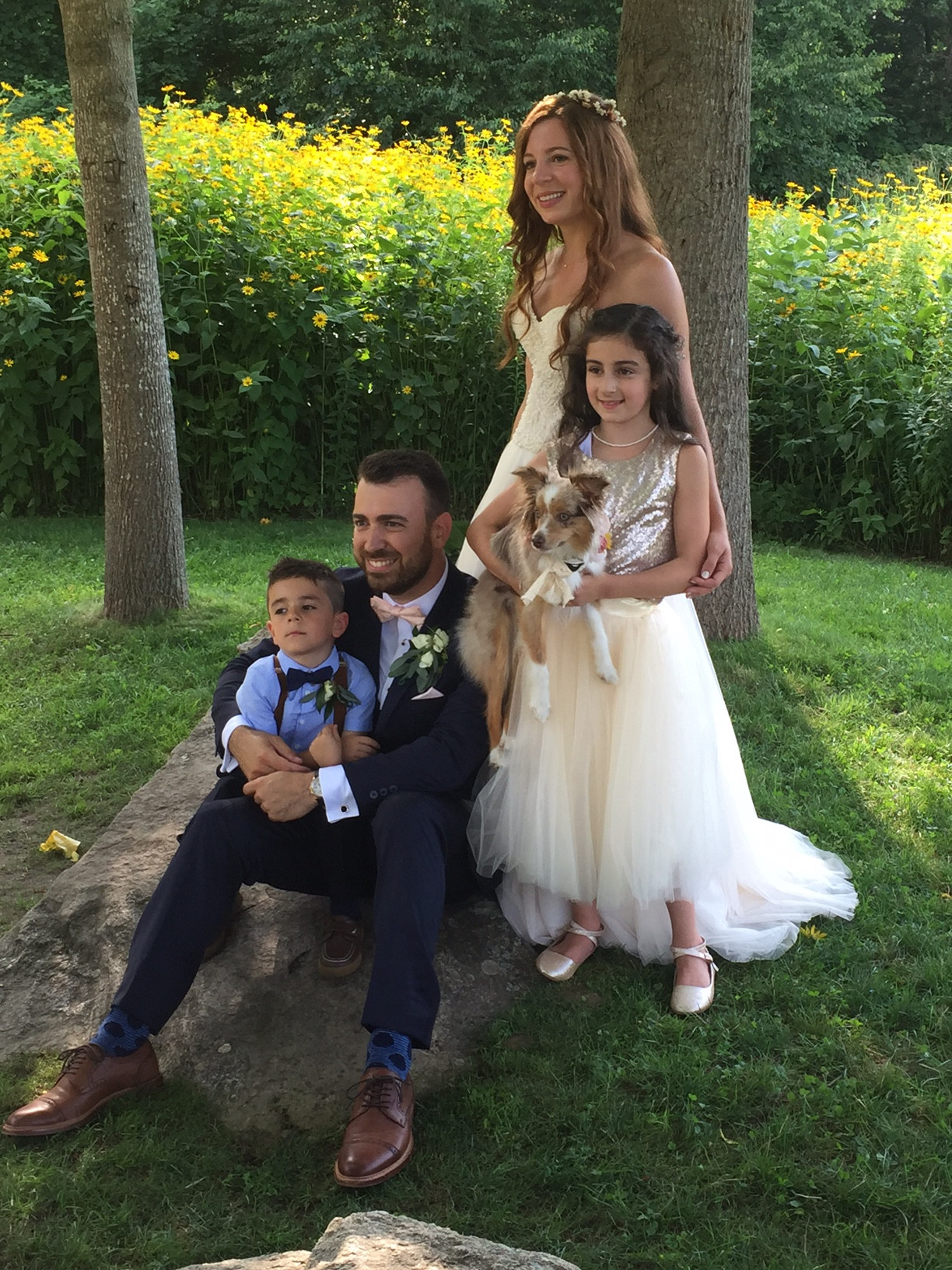 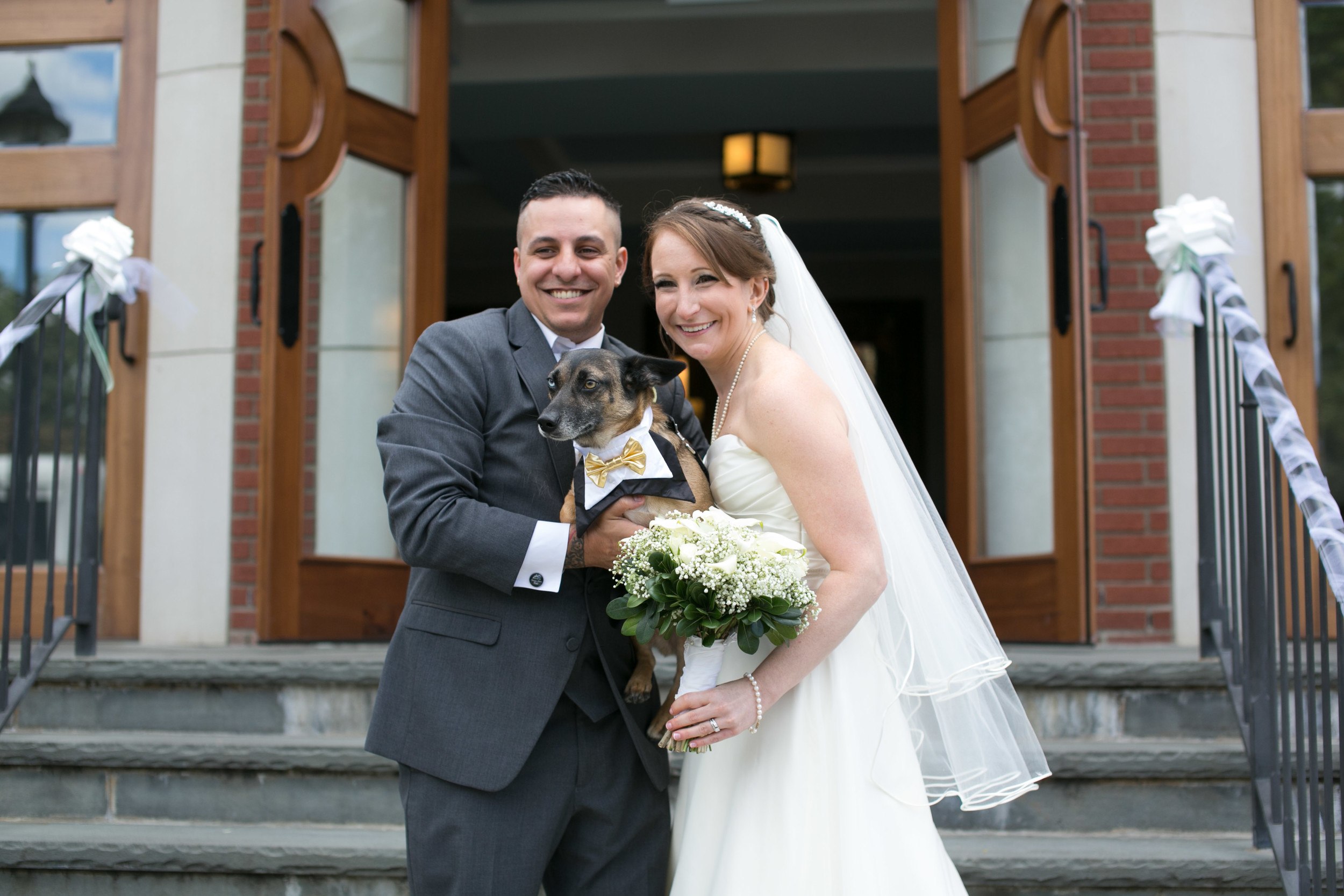 The Silvas on their wedding day with their dog JakeBear. Veronica had the idea to start Pawfect For You after having difficulty managing care for her dog during her own wedding.
Courtesy Veronica Silva
Previous Next
By Rossana Weitekamp

Malvernite Veronica Silva had had her dog, JakeBear, for two years when she got engaged. “Millennials pretty much humanize their dogs,” Silva, 32, said. “So when it comes to their wedding day, the most important day of their life, the dog has to be there.”

This was true for Silva, but when she looked for pet care services for her big day, nothing seemed appropriate. Instead, she relied on her husband’s cousin to transport JakeBear during the festivities. “I felt bad asking her, because she took time out of her day,” Silva said.

Recognizing a need, she started Pawfect for You, a pet care and chauffeur service for weddings, and in 2016, serviced about a dozen celebrations in the tri-state area that year. “We’re full-service,” she said. The company offers everything from pet transportation to and from the ceremony, to overnight accommodations, wedding day baths, walking the dog down the aisle, and even posing the pet for photos. “Everyone’s a little bit different,” she said. “I work with them to figure out all the logistics.”

Last month, the company did a wedding at which one of the bridesmaids was an executive producer for Brides.com. “She called me the following week and said, ‘We’d love to do a feature on you,’” Silva said.

Brides.com sent a producer to follow Silva at the next wedding she did, and then posted a story and video about her business on the national magazine’s website on July 11. “Here we are, eight days later, and that video has over 2.2 million views,” Silva said. “I have 220 requests for services in my inbox.”

Then the story was picked up by the Huffington Post and other media outlets, including WASH-FM, a popular station in Washington, D.C. “I got a lot of calls from D.C. because it was the topic of conversation for their morning show,” Silva said. “A 10-minute discussion.”

She wants to make Pawfect for You a national company that is needed year-round. “The bulk of the wedding season up here is May through September, but you go to Los Angeles, Texas and Florida, it’s a little bit flip- flopped,” she said. “Florida’s wedding season is any time, except for July and August.”

Between August and September, she will be interviewing and establishing contractual agreements with sitters in major cities across the country. She has also gotten into the “not-so-fun” part of her business, which is working with lawyers to determine how to best manage Pawfect for You and seek funding.

Silva might even start providing ancillary services, such as pet attire, which she discusses with the wedding couple but doesn’t do herself. “Some brides like to keep the pet apparel as a memento,” she said, adding that the latest in pet fashion includes flower wreaths for female dogs and tuxedo or little vests for the males.

“I always wanted to be able help people, change things, make a difference and make things better,” said Silva, who holds an MBA from Hofstra University. “I like to give the dogs what I call ‘pawsonal’ attention.”

VSC eyes a couple of rematches