Local Family packs for a purpose 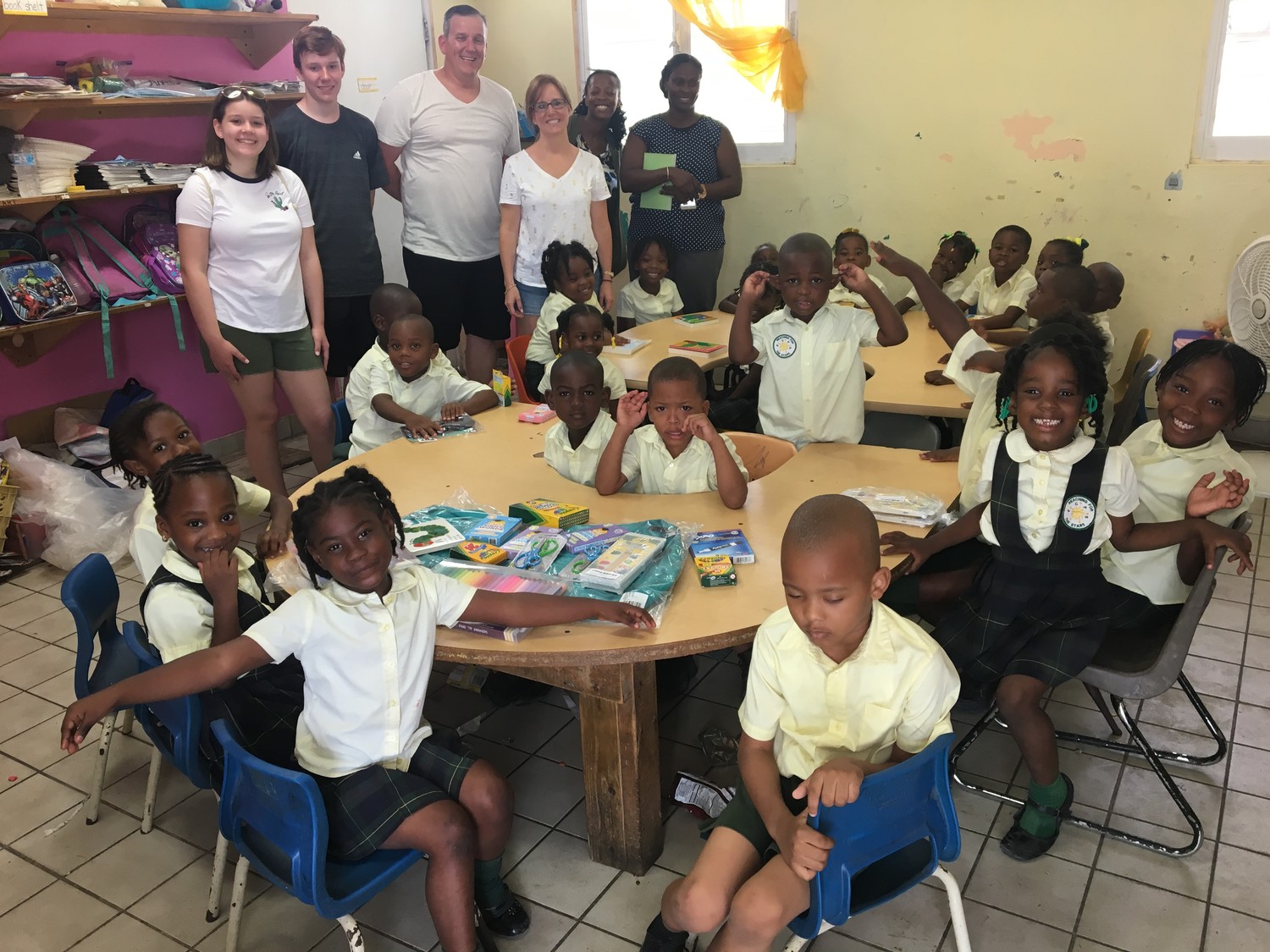 The Urban family, of Seaford, took several pieces of luggage filled with school supplies to Turks and Caicos in June to help local public schools, including the Enid Capron Primary School.
Courtesy the Urban family 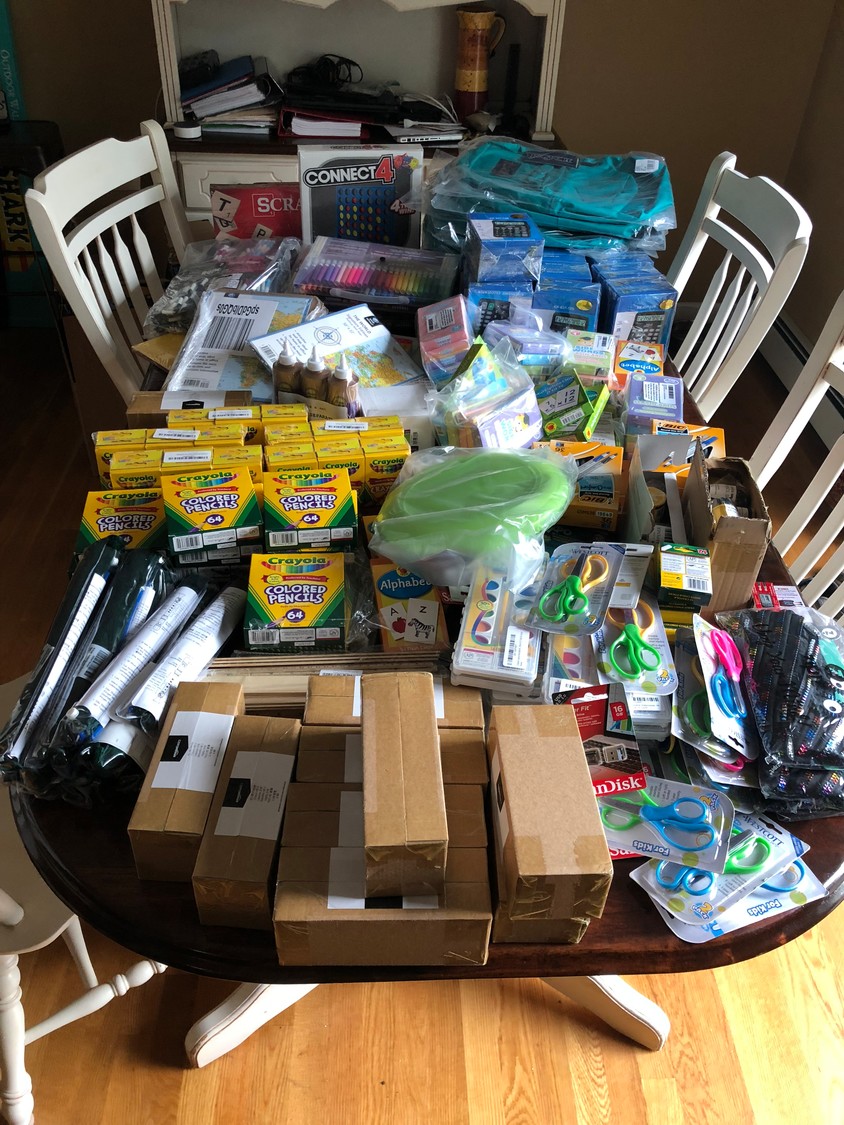 The Urbans’ friends, relatives, neighbors and co-workers helped them Pack for a Purpose, based on an Amazon wish list.
Courtesy the Urban family
Previous Next
By James Mattone

For the past 20 years, Seaford residents Sean and Kristen Urban have saved up for vacations in the Caribbean islands. Although they love these regular escapes from reality, Sean explained, they both realized early on that some Caribbean residents were living not in paradise, but rather in poverty.

“We get so much benefit from going there, and we see the best side of their island,” Sean added. “We get their beaches and all kinds of stuff, so how can we give back so that they get something in return for us enjoying their resources?”

The couple pondered this question until last year, when Kristen found Pack for a Purpose while planning a vacation to Jamaica. The nonprofit organization encourages travelers to pack supplies needed by local schools, libraries and other organizations where they spend their vacations. Inspired by philanthropic efforts by his former employer, Salesforce, a cloud computing company, Sean was ready to make the charity effort a family tradition, going so far as to call JetBlue to get three extra bags on the plane to Jamaica.

Last month, the Urbans decided to Pack for a Purpose once again when they traveled to Turks and Caicos, this time with their children, Sean Jr., 16, and Molly, 14. This project also involved the Sandals Foundation, a charitable organization that assists social development programs across the Caribbean. In Turks and Caicos, the foundation works with several public schools, including the Enid Capron Primary School, which was the focus of the Urbans’ effort.

Months before their trip, the Urbans asked their friends, relatives, neighbors and coworkers to donate school supplies through a wish list on Amazon. Among those who helped was Sohail Sikora, one of Sean’s former colleagues at Salesforce.

Sikora, who emigrated from India to the United States 19 years ago, emphasized that Sean and his family were helping children who deserve a good education but, unfortunately, live in a county without enough facilities or resources. For this year’s drive, Sikora, a resident of Princeton, N.J., gave several backpacks and packages of No. 2 pencils.

“We take these things for granted in this country,” Sikora said. “I know what poverty looks like — I’ve seen it growing up, and I know that sometimes a kid can’t afford these things.”

Once the Urbans got their supplies, they packed several extra pieces of luggage and were off to Turks and Caicos, where they visited the Enid Capron school. There, Sean Jr., a Seaford High School student, and Molly, a Seaford Middle School graduate, saw education in a developing country firsthand, and observed how much these students appreciated any support.

“Kids in our school expect everyone to have air conditioning and luxuries like that,” Molly said, “but in that school, they don’t get it at all . . . They were so excited to get crayons and things as simple as colored pencils.”

Sean said he plans to have his family take on a different service project next year, such as a Christmas toy drive, because they have yet to plan another vacation to the Caribbean. Sean Jr. and Molly said they are both ready to volunteer with their parents once again, especially Sean Jr., who is currently working toward becoming an Eagle Scout in Troop 239, for which his father is an assistant scoutmaster. Once they both complete their education, they plan to follow in their parents’ footsteps by coming up with their own charitable traditions.

“It felt good to give back to the kids,” Sean said, “and I want to have the same feeling again — I want to help more of these children in the future.”