At new Sea Cliff restaurant, ‘everything has purpose’ 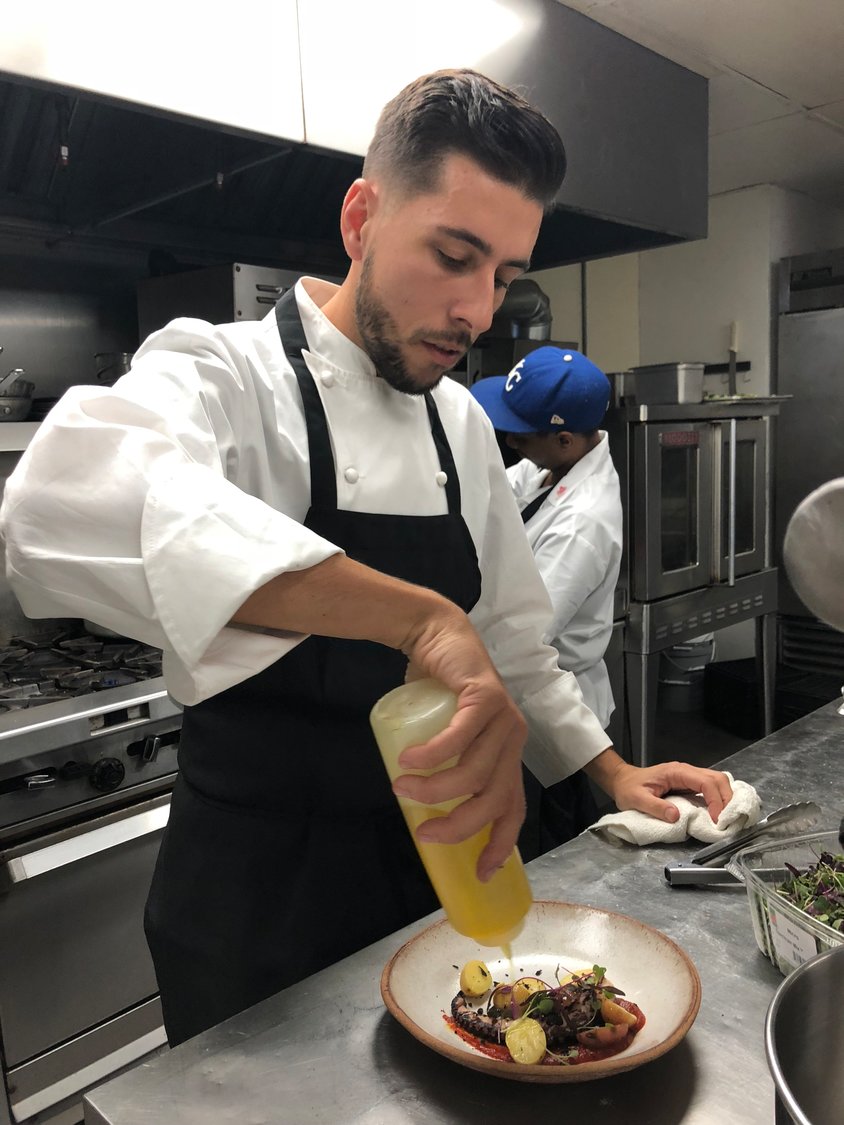 Chef Robert Occhipinti drizzles a stream of olive oil onto a plate of charred octopus, which is served with roasted peppers, confit potatoes and olives.
Alyssa Seidman/Herald Gazette 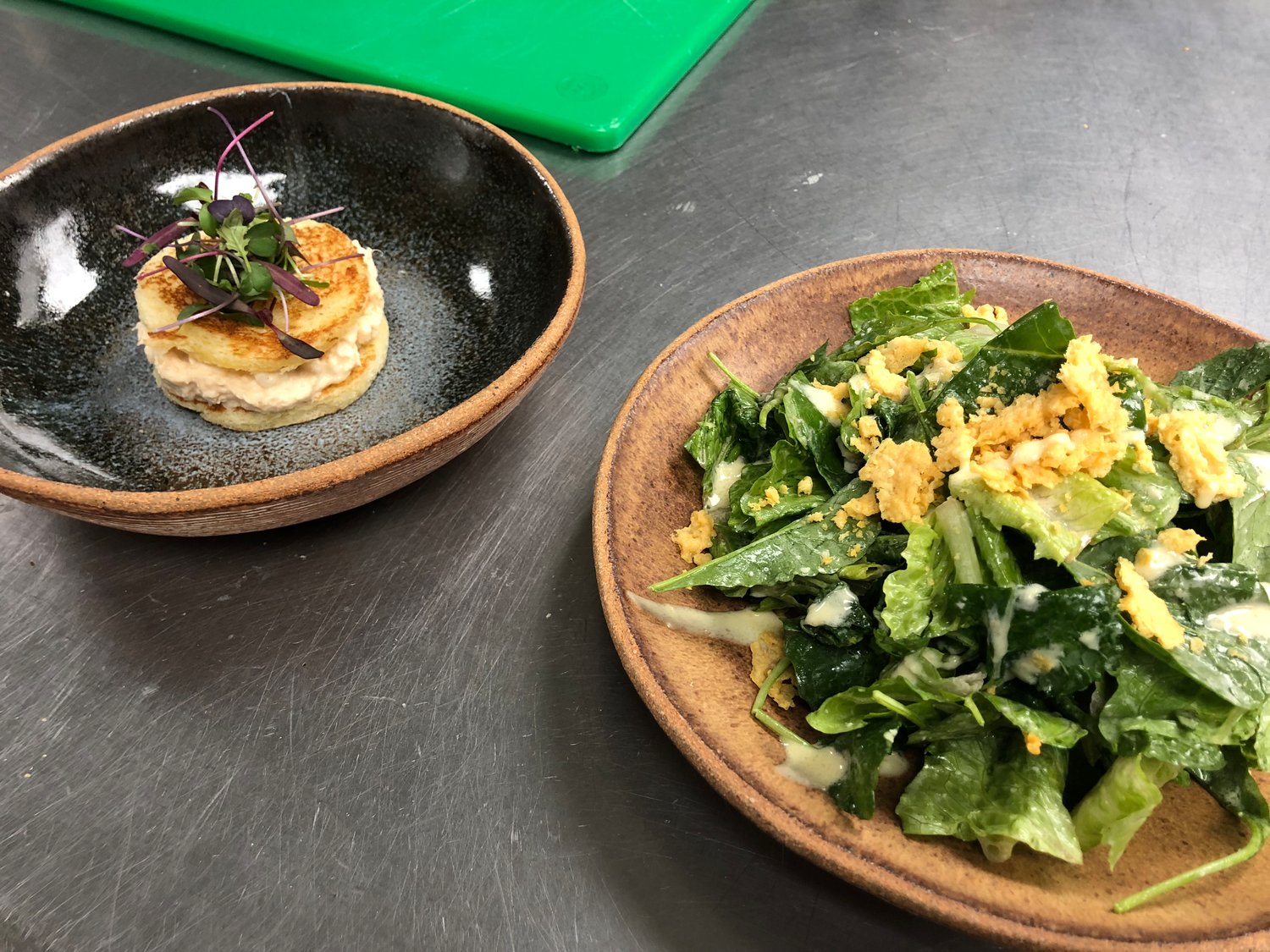 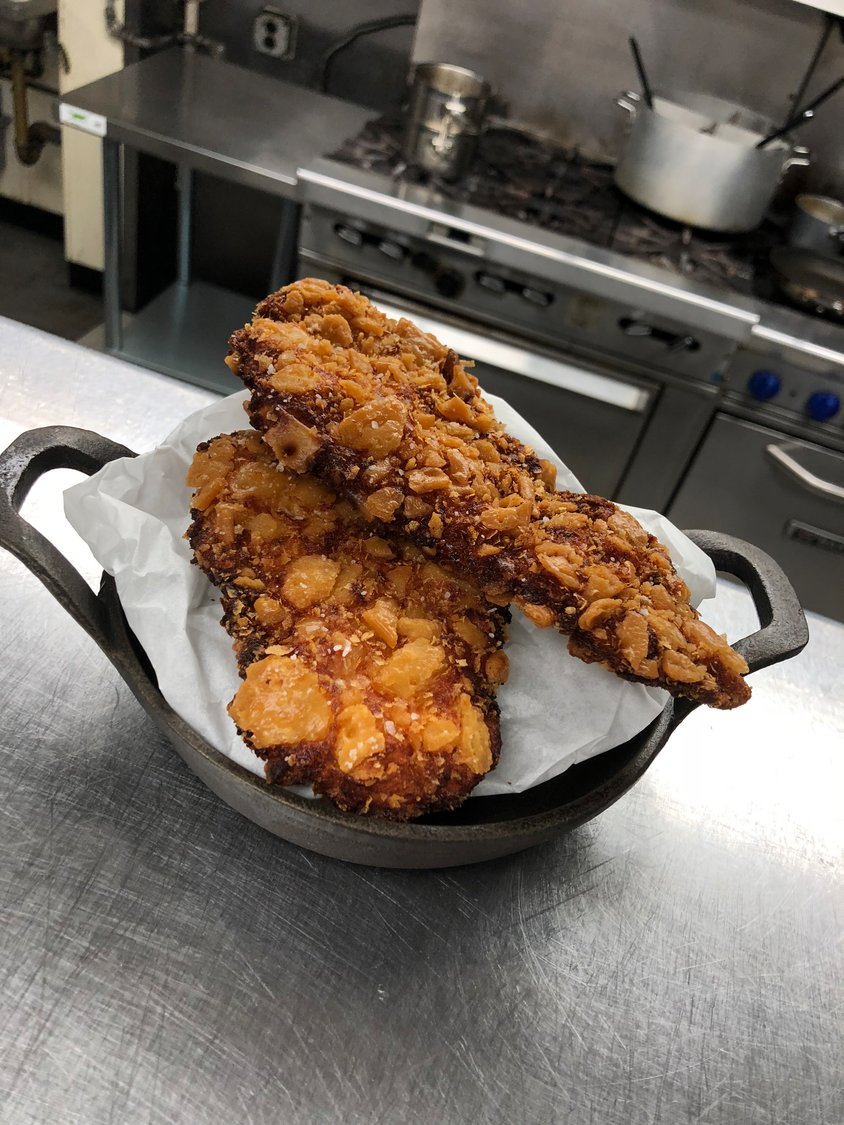 Maldon & Mignonette’s fried chicken is served with a side of sweet honey.
Alyssa Seidman/Herald Gazette
Previous Next
By Alyssa Seidman

Dinner service at Maldon & Mignonette started early Sunday night. The new restaurant, which replaced The Crispy Pig in Sea Cliff, teemed with life 10 minutes before opening. Upstairs in the kitchen, chefs portioned au jus into quart containers, unmolded chocolate tarts from metal frames and shredded Parmesan off the block to bring down into the dining room. There, guests waiting to be seated enjoyed a drink at the bar, satiating their hunger for a taste of Chef Robert Occhipinti’s food.

Occhipinti, of Smithtown, began his career in Manhattan after graduating from the International Culinary Center in SoHo. In his mid-20s he worked under the stewardship of Chef Jean-Georges Vongerichten at Mercer Kitchen; with Fourth Wall, the restaurant group behind Park Avenue Seasons; and at Locanda Verde under Chef Andrew Carmellini. After training with chefs in Italy he returned to Long Island to assume a position as sous chef at Jema, a Michelin star-rated restaurant in Huntington Village. Now, at 29, he has a restaurant of his own.

“There’s nothing like this around,” he said of Maldon & Mignonette, whose name refers to the culinary terms for salt and pepper. Maldon is a special type of flake sea salt and mignonette is a blend of black and white peppercorns. “We opened Friday sort of under the radar and people are obsessed.”

Occhipinti’s menu reflects “simple, clean food at an affordable price.” The limited menu rotates with the seasons, incorporating numerous techniques the chef has learned throughout his career. And while some diners might not be used to a smaller selection of dishes, Occhipinti said it forces him and his team to plate to perfection. “Everything has to be on point because everything has purpose,” he said.

And that includes the space, too. After acquiring the restaurant in August, Occhipinti and some of his colleagues from Jema revamped the dining room. A fresh coat of gray paint adds depth to the interior design; booth seating that lines the back wall has been reupholstered in turquoise-colored vinyl, elevating the space; and the restaurant’s motto, “Season With Authority,” stands out in striking black paint against a weathered brick wall.

Server Caitlin Okula, who lives in Huntington but has family in Sea Cliff, said she was “ecstatic” when she learned Occhipinti was opening a restaurant in the village since they worked together at Jema.

“I always thought he was so talented and that he should have his own place, so this is really exciting for him,” Okula said. “He is the most amazing boss that you could ever hope for. He’s so open to ideas and very willing to communicate with everyone that he works with, and I think he’s going to be really successful.”

In the short two weeks since opening, Maldon & Mignonette has been “fully packed,” said Occhipinti. “Overall people have said it’s been worth the wait.” When he wasn’t busy prepping and plating during service, Occhipinti would make his way down to the dining room — running food as he went — to greet and talk with each table. “I’m still trying to get to know the crowd,” he said.

Melinda Toner, who lives around the corner from Maldon & Mignonette, went there for dinner and drinks. “The bartender was personable, and the crab cake was really good,” she said. “I would return. I want local businesses to succeed.”

But Occhipinti said fulfilling his passion through food is more important than success. “I want people to have a good experience and make this place a go-to spot,” he said. “I’m just here to do what I love, stay in it and give people quality food.”