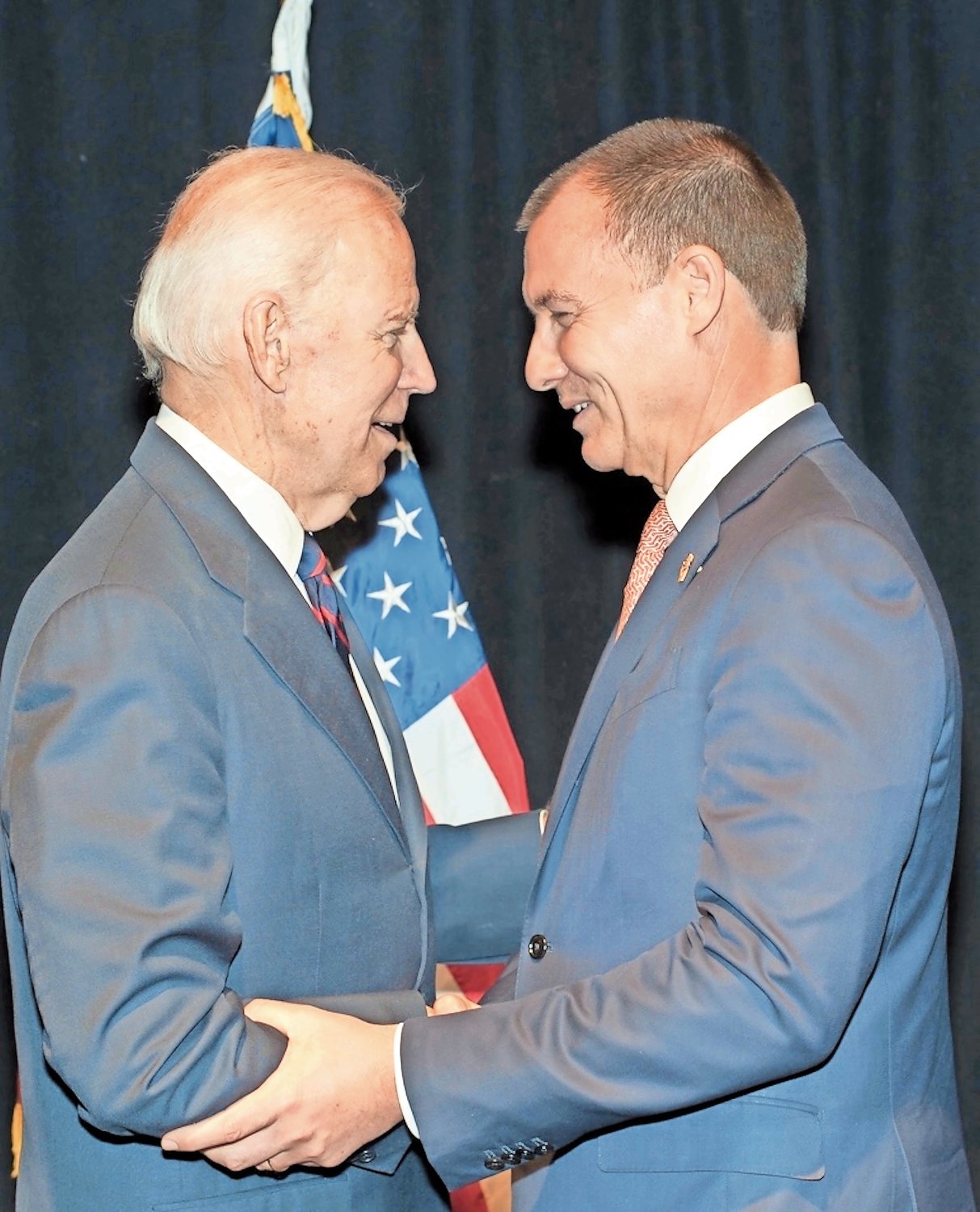 When Vice President Joe Biden Jr. announced his candidacy for president on April 25, U.S. Rep. Tom Suozzi was the first to endorse him.

“Joe Biden has the experience, knowledge, relationship, gravitas and integrity to win,” Suozzi said. “He will put the country on the right track.”

But Suozzi, a Democrat from Glen Cove, did not support Biden when he ran in 2008 against Hillary Clinton. The reason, Suozzi said, is because Clinton is a friend. Also, Biden isn’t the same person he was back then, Suozzi explained. He’s more seasoned now.

Biden, 76, a Democrat, is the longest serving senator, and was the 47th vice president during Barack Obama’s terms. A former attorney, Biden also ran unsuccessfully for president in 1988. If he wins, Biden will become the country’s oldest president.

Suozzi said Biden’s age is a concern, adding that it is something that is in the back of everyone’s mind. But Biden seems to be in better shape than our current president, Suozzi said. And times have changed. People live more active and vibrant lives, he reasoned.

He has met Biden on numerous occasions and found the former vice president to be very warm and genuine, Suozzi said. He admires Biden. “He’s been through the peaks and valleys of life,” said Suozzi, adding that he finds Biden remarkable. “He’s been knocked down as low as you can get and he’s still moving forward and wants to serve.”

Suozzi was referring to Biden’s personal life, where he has experienced much tragedy. In December 1972 his first wife, Neilia, and infant daughter, Naomi, died in a car accident and his sons, Beau and Hunter, were seriously injured. Although the boys survived, Beau, who Biden had a close relationship with, died of brain cancer in 2015 when he was 44-years-old. And Biden has had serious health issues too, surviving two potentially deadly aneurysms in 1988.

Unlike the other candidates running as Democrats for president, Biden, when announcing his candidacy, said he was on a crusade to rid the country of President Trump.

Suozzi said the other Democrats are running against each other to win the primary, when voters are more ideological. In the case of Democrats, a primary brings out voters who are moderates. Biden’s decision to run toward the middle is risky, Suozzi said.

He agrees with Biden’s assertion that the race is “a battle for the soul of the nation.”

“Right now, I’d argue that the country has lost its way with the violence and mean spiritedness,” Suozzi said. “We need someone who will say we are all in this together but not in a wimpy way.”

Then he shared his childhood affection for actor John Wayne, who always played a tough guy but Suozzi said when it came time to doing the right thing always did it.

“That’s what the country needs right now,” Suozzi said. “The president is tough and clever but there is a hard heartedness to Trump’s tactics and the way he characterizes people.”

We need toughness and direction, Suozzi said, but also warm heartedness, all of which Biden has in spades.

Critics of Biden cite missteps —the accusations of a few women who said that Biden touched them in a way that made them feel uncomfortable; the 1994 crime bill, which Biden crafted, that has caused incarceration rates for African Americans that are unduly punitive and discriminatory; and the line of questioning of Anita Hill during the Clarence Thomas Supreme Court confirmation hearings, when Biden was the Senate Judiciary Committee Chairman.

Will voters hold these missteps against Biden? Suozzi said no, referring to Trump’s missteps and how many people ignore them. “I think people are sick of the gotcha stuff,” Suozzi said. “Biden is a warm person and that’s how he conducts himself. We should judge him on who he is as a person now.”

At the end of the day, Suozzi said, the country needs the steady hand of Joe Biden who has a proven progressive record. “He’s a regular Joe, that’s what people like about him,” Suozzi said. “He won’t be pushed around by the story of the day or intimated by Trump during the campaign.”