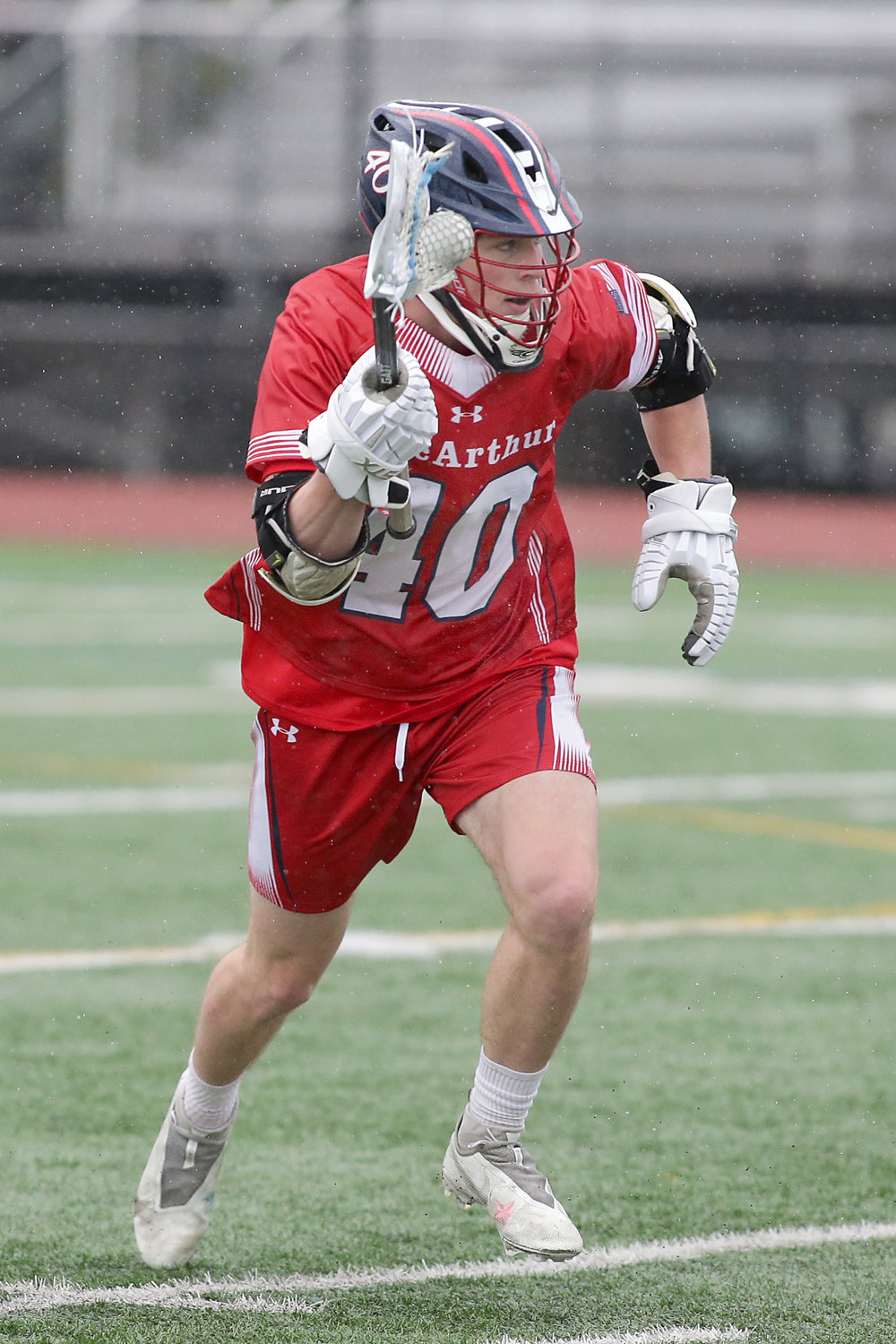 John Napoli scored twice last Friday but the Generals fell short at Garden City, 12-6, and will aim for a rematch in the playoffs.
Brian Ballweg/Herald
By Andrew Coen

Despite ultimately falling to Garden City last Friday, the game provided a confidence boost for the MacArthur boys’ lacrosse team and its quest for a rematch on a bigger stage.

MacArthur (7-4) fell at Garden City 12-6, but hung tough with the unbeaten Trojans in a game it jumped out to a two-goal lead late in the first quarter and surrendered just one goal in the second half. The Generals were competitive for much of the game despite a dominating performance by Garden City’s Jack Cascadden at the faceoff X winning 21 of 22 draws.

“I think the guys realize that when we had the ball we did a pretty good job of scoring,” said MacArthur coach John Nessler. “Although it was a six-goal game, it was a nice wakeup call that we can play with teams like this.”

A James Hegel tally with just over four minutes remaining in the first quarter put MacArthur up 3-1 before Garden City caught fire to score the final four goals of the period as part of a 10-2 run to end the first half. The Trojans dominated possession during this 16-minute stretch aided by dominance on draws, with Jack Cascadden winning 21 of 22 for the game.

Many of the Garden City goals came on fast breaks plays in transition with the Generals’ close defense putting up a strong battle in allowing no goals in the third quarter and just one in the fourth. The unit, led by Michael Cassano. Luca Runyan, Nick DelGrosso and Ryan Larkin along with goalie Steven Weber have been a huge part of MacArthur’s four-game winning streak heading into Friday.

“I think our defense played very well,” Nessler said. “We had a pretty good understanding as to what they were going to do against us.”

Two days before the Garden City game, the Generals won their fourth in a row with a commanding 13-7 win at Roslyn in which Weber registered 17 saves. Matthew Papach had four points on three goals and an assist. Hagel had four assists and a goal and Forchelli scored twice in a game in which MacArthur led 7-2 at halftime.

MacArthur closes the regular season with three straight home games starting Wednesday night against Calhoun for a 7 p.m. faceoff. The Generals then host Carey Saturday at noon and Herricks next Tuesday at 5 p.m.

One more win would clinch the two seed for the upcoming Class B playoffs where MacArthur is looking to reach the county finals for the first time in program history in a game that would likely once again pit it against Garden City.

“The county championship is the ultimate goal for us,” Nessler said. “Last year was the first time we made the Final Four and it would be nice to get back there this year and I think we have the team to do it and even take us further.”