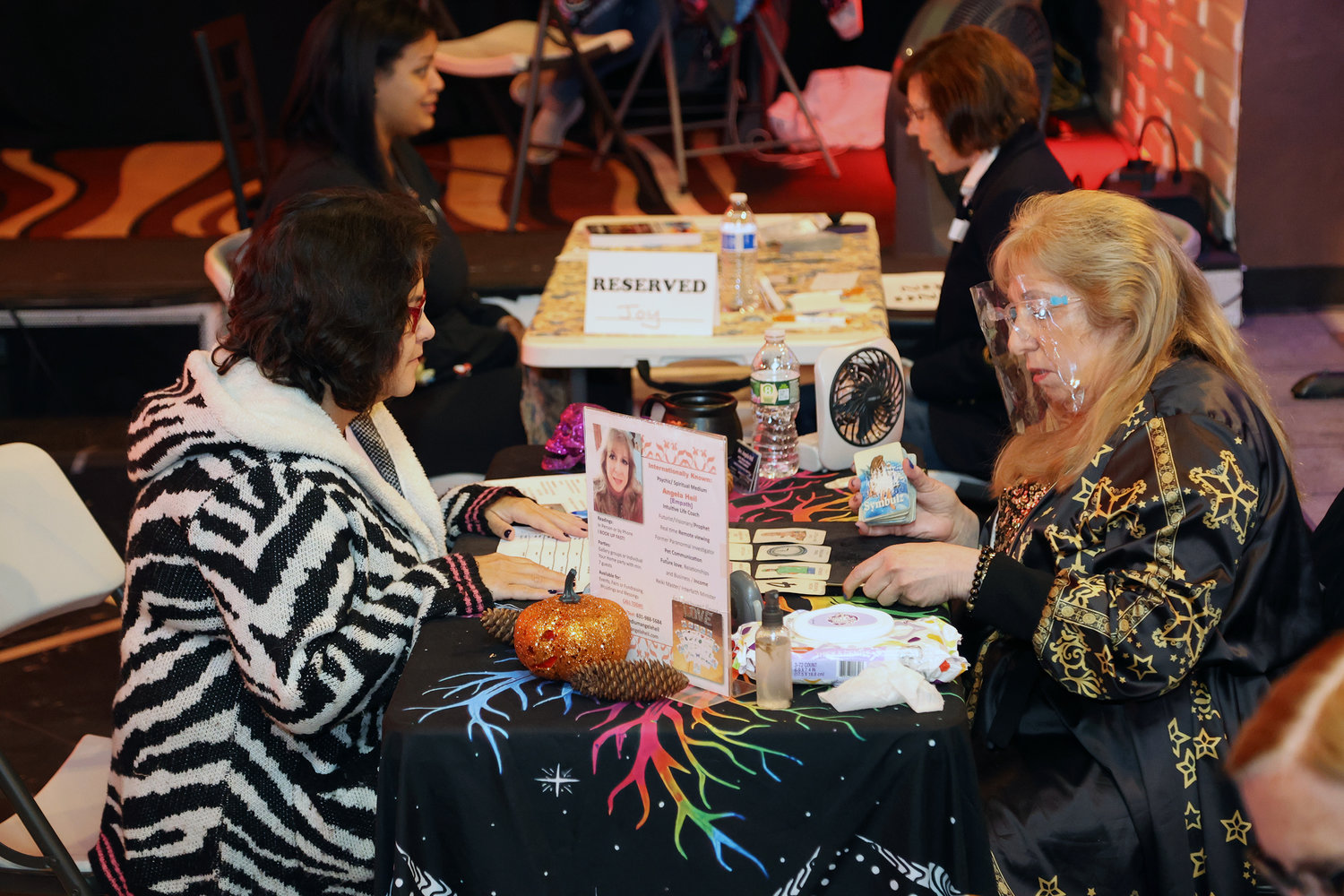 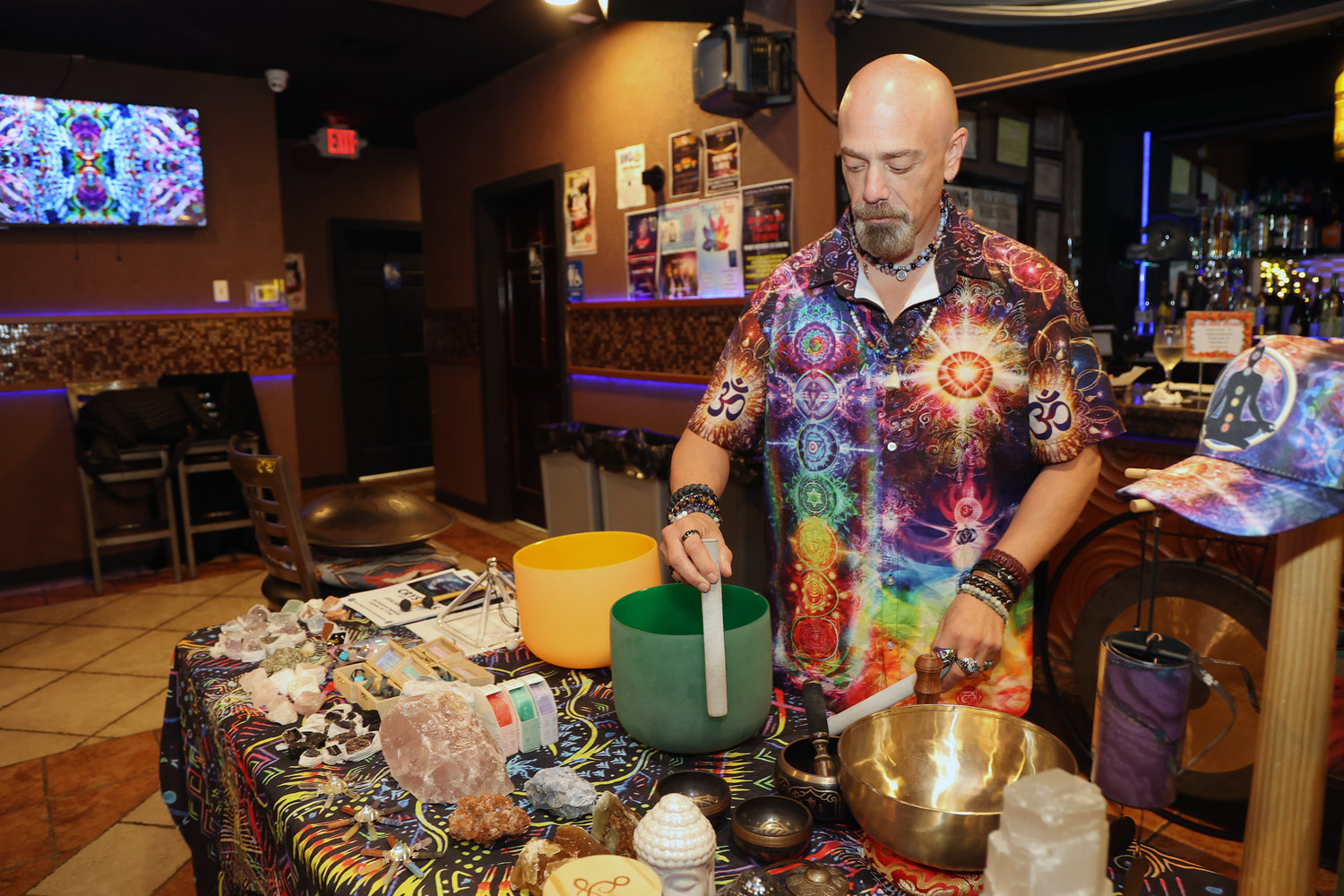 Kenny Cowie played a set of standing bells at G’s nightclub on Saturday. The event space held a psychic fair throughout the day. Cowie’s shirt denoted his belief in chakra meditation.
Sue Grieco/Herald
Previous Next
By Kyle Chin

The tables throughout the club, which normally accommodate drinks and partygoers, were made up into stations for readings. Meanwhile, a number of vendors sold their wares in the central isle of the club, including crystals, candles, charms, and other trinkets.

The gathering brought together a thriving community of people claiming contact with the supernatural throughout the greater New York City area. The experiences recounted by many of the psychics and mediums present shared many of the same general themes. Most asserted that they recognized their own spiritual abilities in early childhood, connecting with some spirit, usually a grandmother.

“I was four years old when I saw my first dead person. It was my grandmother,” claimed Angela Heil, who describes herself as a psychic medium and interfaith minister. Heil asserted that while she had long felt supernatural connections, a purported divine vision led her to her current path.

“One day I had a Christ visitation at the end of my bed. I said to him, ‘Are you in the right place?’ And then he brought in the archangel Michael, with his wings, who was like 25 feet tall,” claimed Heil, while admitting how outlandish the story might sound.

“He put me on the stage of an amphitheater, looked into my eyes, everything went blank, and now I see spirits with my eyes closed the same way I see people with my eyes opened.”

While some of purported psychics acknowledged an understandable skepticism of their claims, the point most drove home was a desire to help and counsel people.

“My job is really to help people live happier lives. I’m a widow twice. I get a lot of people who have lost people. So I do what I can do,” stated Heil.

Lisa Fazio, who described herself as a psychic artist, said that she first sought out the supernatural in her youth when her grandmother passed away, and Fazio wished to know where she went.

“I’ve been an artist for 40 years, and a medium for about 15 years,” she said. “I teach intuitive classes, where I teach other people how to find their purpose.” Fazio said that she wishes to help people to intuitively explore their gifts through their other senses.

Those who sought out readings seemed generally pleased with what they heard. Daniel, a 16-year-old West Hempstead Secondary School student, found his way to the event through his mother’s network of friends. He received a reading from Fazio.

“It felt like I talked to her before, but I didn’t. That was the first time I ever met her,” he said. “Some stuff was new to me, but it kind of made sense.”

11-year-old Anna received a spiritual reading from Dara Miller. “I knew a lot of it, but she was really spot on with everything. She knew about stuff... she said I had an attachment to stuff I’ve never told anyone about.”

The small conference was the brainchild of Stacey Shortell, the manager of G’s, who worked with psychic mediums Ginna Scotti and Kristen Tinsley.

Tinsley recalled that she also felt a communion with spirits in her childhood, but put off acting upon such feelings until later in life. She mentioned that work in standup comedy helped her open up about her beliefs.

“We reach out to the spiritual community on social media, to see if anyone is interested in coming down to do reading, to do vending,” Tinsley said of organizing the event. “You just kind of put it out into the world. You release the energy into the universe, and that’s how it all comes together.”

Shortell explained how she brought the psychic fair together, and that she hopes to have move events like it in the future.

“I went to a psychic fair. I met Gina. I reached out to her and now we’re going to do other business ventures together,” she said. “This is the first one. We’re going to do it twice a year, and we plan to do a seminar event once a year.”