At practices, football players in the district get a new, protective look 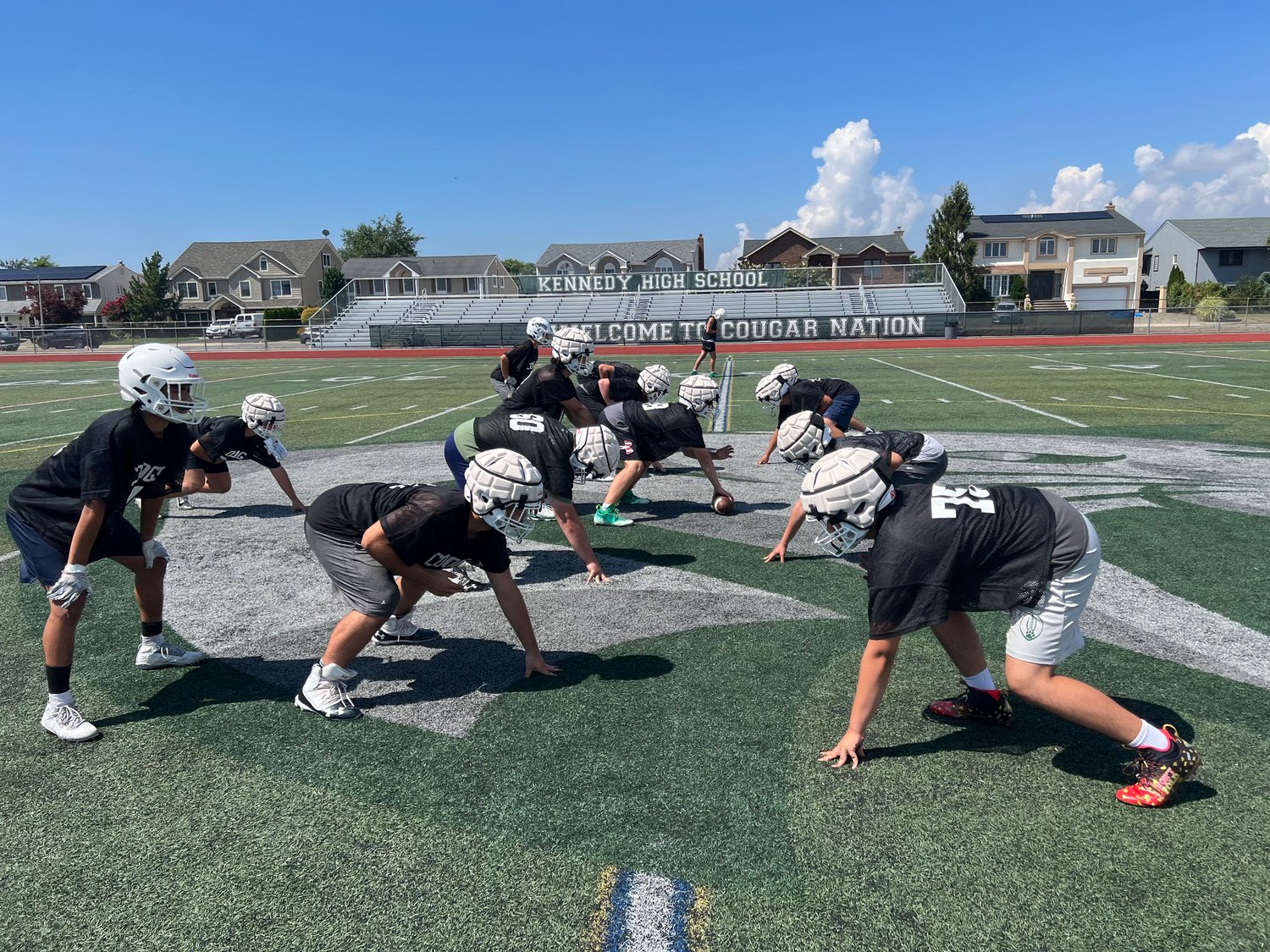 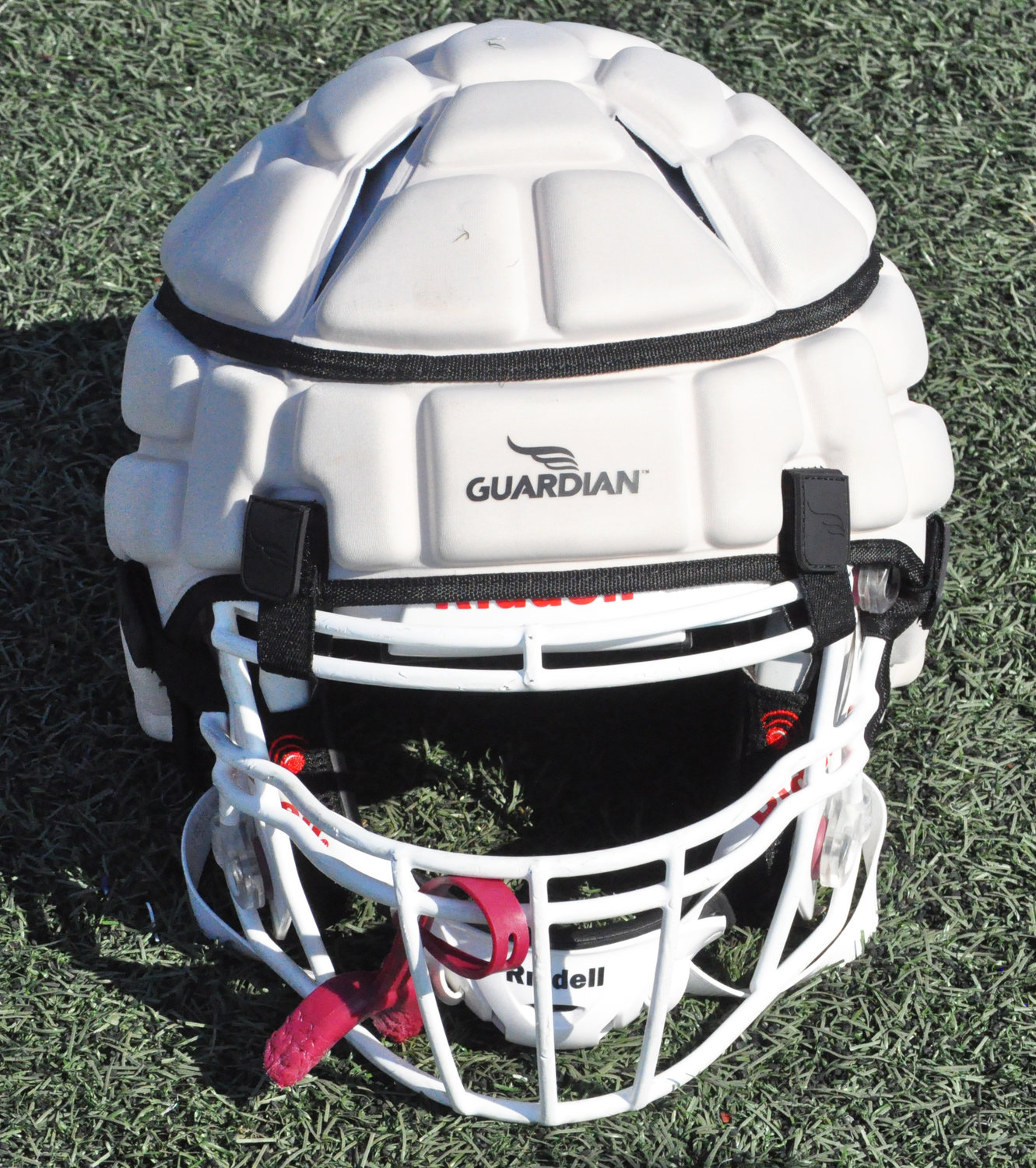 The caps reduce the force of impact a football player endures when they fall to the ground. It fastens onto the outside of the helmet with Velcro straps.
Tony Bellissimo/Herald 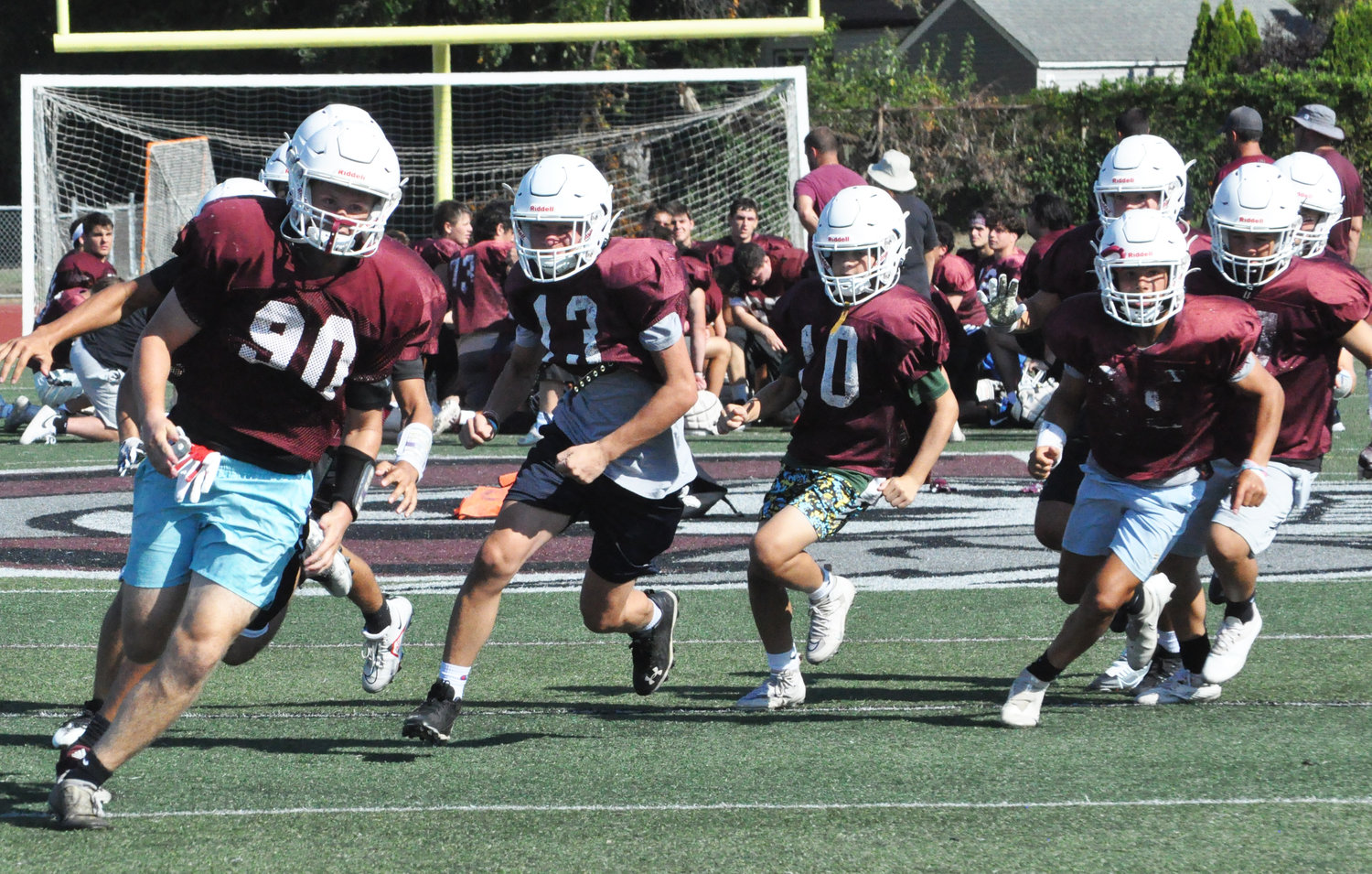 Football practice started on Aug. 22, and 20 players per team at a time are able to wear the caps during practice. The caps are not approved for game play.
Tony Bellissimo/Herald
Previous Next
By Jordan Vallone

If you pass a high school football practice this fall in Bellmore-Merrick, you may notice that not all of the players’ helmets look the same.

Players are now wearing guardian caps, a soft-shell helmet covering that reduces the impact a football player endures when they fall to the ground, and consequently, the risk for a head injury. The Bellmore-Merrick Central High School District is kicking off the season by providing all three varsity football teams guardian caps, making it among the first districts on Long Island to do so.

Eric Caballero, district athletic director, said football lovers may notice these caps being worn by players on television, at various levels of play. “As the NFL training camps began this year, you started to see the implementation of the guardian caps,” he said, “and not only at the NFL level, but the NCAA level as well.”

Caballero said he learned about the caps from one of the district’s football coaches, who had received an email from a sales representative at Guardian Innovations, the company that created the caps. Earlier this month, Caballero decided to research the caps, and calculate costs, as the expense was not in the district budget.

After speaking with Superintendent Mike Harrington, and the district’s Board of Education, it was determined that acquiring the caps — 20 per team — would be possible. The caps were ordered, and within a week, the teams had them, just in time for the start of this season’s football practices on Aug. 22.

The caps are foam-like in appearance, lightweight, and strap onto the helmet with Velcro. They will mainly be used by specific positions groups, Caballero explained, players that face a greater risk for physical contact. This includes linemen, tight ends and linebackers. If a player is recovering from a concussion, however, or is deemed at risk for a head injury, a coach can choose to have that specific player also wear a cap.

“They’re very lightweight,” Caballero said. “The kids are using them, without question, without issue.”

Matt Moody, the head football coach at Mepham High, said he’s seen the caps before, and was always intrigued by their actual use.

“They’re an additional thing to help with player safety,” he said. “Anything to help protect the kids is a great addition to the program.”

Data shows the caps reduce the force of impact, up to 33 percent, according to Guardian Innovations. The caps also insulate, reducing up to 20 degrees of static heat. They are slick to the touch, fit all helmet sizes, and are also machine washable, which is an added bonus, Cabellero said.

Moody has long been a football coach, first at Marist College when he was a student, and later at Deer Park High School. He held various assistant coaching positions at Mepham, and this is his first year as the head coach of the program. He said so far, he’s been implementing the caps as suggested, giving them to mostly high impact position groups, and one to a player who suffered a head injury during the spring.

Moody himself had 10 concussions as a player, and sees why the caps are so important. “Once you have one concussion,” he said, “you’re more susceptible to future concussions.”

Taking the caps on and off is easy, Caballero said. The cap goes on top of the helmet. There is no spreading of bodily fluids from player to player.

“The kids do it on their own,” Caballero said. “(The caps) are not cumbersome.”

The caps, for now, are only being worn at practices, Caballero explained, because they are not approved for game play yet. That’s an issue, he said, that is even above county-sanctioned rules. Something such as approving guardian caps for games would need to be done so at a statewide level.

Even though the caps are only being used by varsity players, if the initiative takes off, the district make look to purchase more.

“We implemented this with the intention of it spreading across the board,” Caballero said. “We are piloting it with varsity players.”

The safety of student athletes, Caballero added, is always a priority. “This is a small price to pay to further improve safety for our student-athletes,” he wrote in an email. “The BMCHSD has always been willing to attempt to stay ahead of the curve and I am proud to say that this initiative will be in place at the start of tryouts at all three of our high schools.”