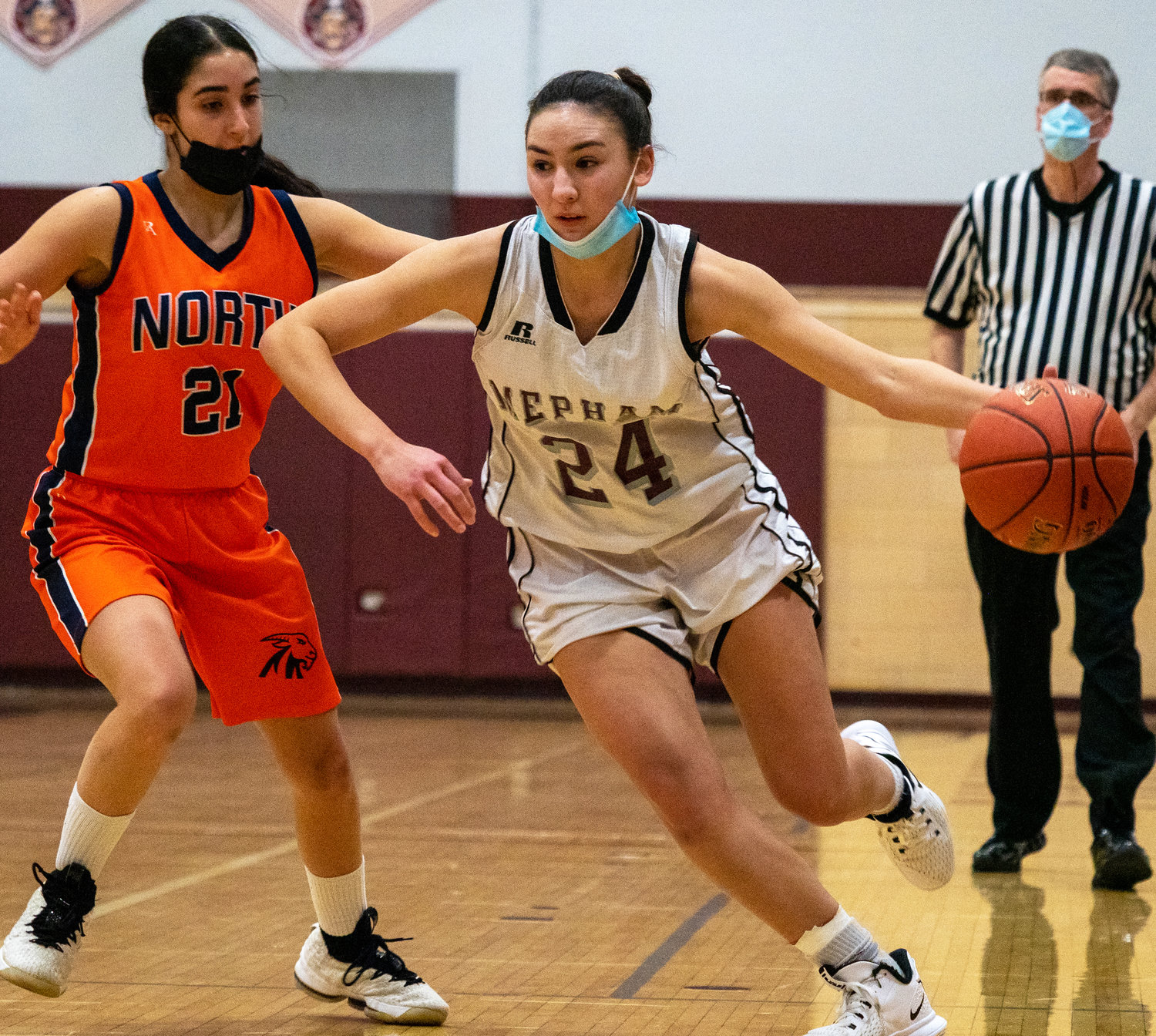 Mepham senior Hailey Guerrero, right, ranks among the Top 10 scorers in Nassau County at nearly 21 points per game and is one of three D1 athletes on the roster.
Eric Dunetz/Herald
By Tony Bellissimo

Behind another stellar offensive performance from senior wing Hailey Guerrero, Mepham opened the second half of its Conference A-1 girls’ basketball schedule last Saturday afternoon by winning for the 11th time in 12 games, defeating Great Neck South 51-30.
Guerrero, one of Nassau County’s Top 10 scorers, poured in 26 points, one shy of her season high, senior Alanna Morse had 12 rebounds and 6 points, and freshman Makayla Daube added 9 boards and 6 points as the Pirates (12-2 overall) improved to 6-1 in conference action and remained one game off the pace of frontrunner MacArthur.
“It’s been tough juggling everything with the [Covid] protocols and practically every game it’s either we’re without kids or the team we’re playing is missing kids,” Mepham head coach Jim Mulvey said. “We finally got our entire team back January 12 and we have the ability to play big and play fast. We’ve played well and I’m excited about what we can do moving forward.”
Though Mulvey said “as Guerrero goes the team goes,” the midseason addition of Morse has bolstered the frontcourt and provided the Pirates with a strong inside presence trio to go along with seniors Luciana Setteducate and Riley Clark.
“It was a wait-and-see with Alanna,” Mulvey said. “She suffered an injury on her non-shooting wrist playing softball in November and we weren’t sure if or when we’d have her. She’s another hard-working kid and a leader and has been a rebounding machine.”


In her first game after reaching the required minimum practices to compete, Morse, who is headed to Hofstra University on a softball scholarship, had 13 points and ripped down 17 rebounds to lead a win over Great Neck North on Jan. 11.
Setteducate, a first-year varsity player and soccer standout bound for Stony Brook University, has posted 20 or more rebounds in three games and chips in 5 points per game. Clark, a returning starter who brings consistency to the paint, averaged 6.8 points and 5 rebounds through the first 14 contests. The ultra-versatile Daube is thriving in her second varsity campaign and in addition to being one of the team’s best on-ball defenders, she’s running the point when energetic sophomore Ashley Felsberg isn’t.
Then there’s Guerrero. Headed to Stony Brook with her softball talents, she’s on the way to becoming a two-time All-County selection for basketball. She’s averaging 21.2 points per game. “Hailey’s basically doubled her production from last season and it’s an unselfish 20 points she’s averaging,” Mulvey said. “She’s getting a ton of baskets in transition. She’s so good in the open court and we’ve been able to find her.”
Mulvey said the Pirates are looking forward to their rematch with MacArthur on the road Feb. 5. The Generals took the first meeting by 10 on Jan. 8. “We have a nice rivalry with MacArthur and it seems like home court doesn’t matter,” Mulvey said. “We’re a better team now than we were a few weeks ago so we’ll see if we can even the score.”