Residents of Merrick and Bellmore have noticed a number of trees being cut down over the last year. The Long Island chapter of the organization, Wild Ones, hopes to work with the Town of Hempstead to establish a stricter tree ordinance, in an effort to protect the trees, and help the environment.
Courtesy Wild Ones 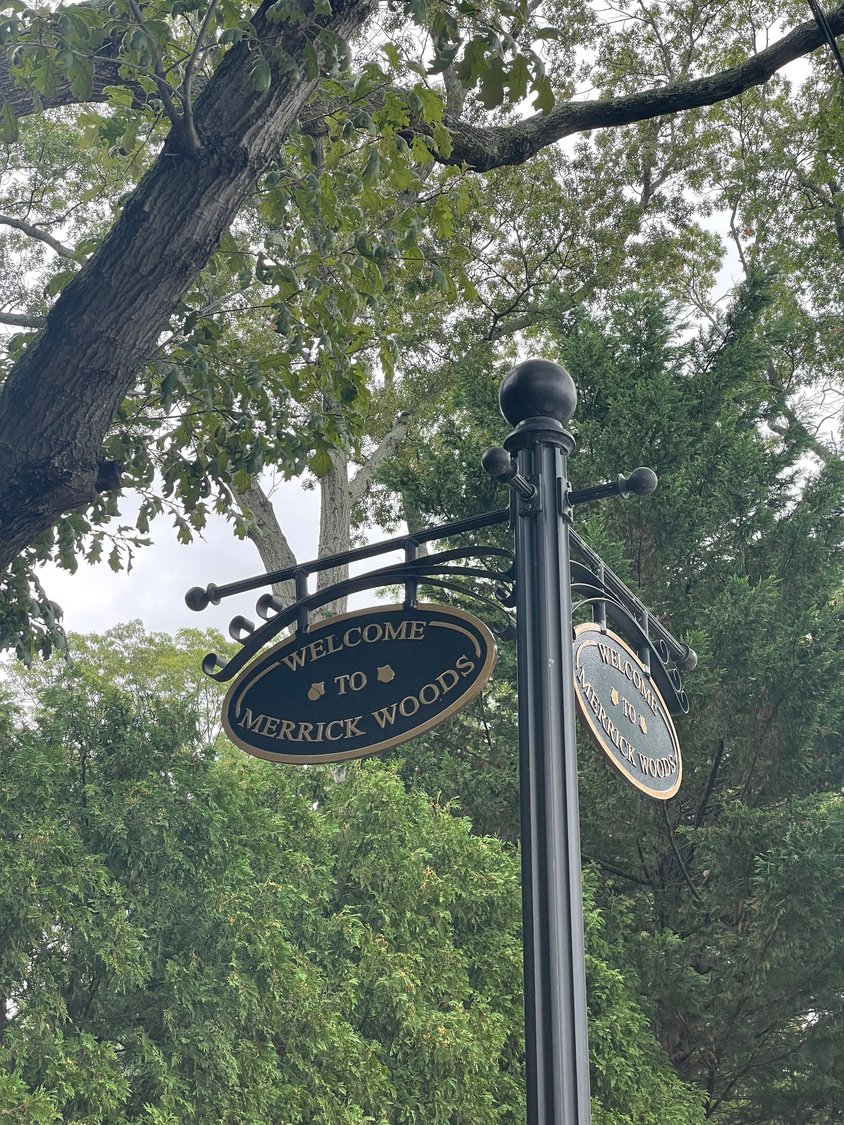 There are a number of neighborhoods of concern, including Merrick Woods, an area known for its abundance of trees.
Jordan Vallone/Herald
Previous Next
By Jordan Vallone

What’s happening to all the trees?

That was the question last week as community members from Merrick, Bellmore and surrounding areas met at the Merrick Golf Course to discuss tree loss in the area, and start planting the seeds to grow solutions.

Over the last few years, residents of Merrick and Bellmore noticed a number of trees being cut down, whether by private property owners or developers building new homes.

There are areas of Bellmore and Merrick, as well as nearby communities, known for an abundance of trees, including the neighborhood of Merrick Woods. Merrick resident Andrea Martone told the Herald earlier this year that she counted 27 trees taken down in just a five- block radius.

“If we continue at this rate,” Martone said, “there will be no trees left very soon.”

Long Island Sound Study, an organization specializing in the restoration and protection of the Sound, also provides some data about tree loss on Long Island. During the earliest stages of its settlement in the 1620s, the Island was 95 percent forest. In 1998, that number was below 60 percent.

The creation of farmland and the development of suburbia are considered major contributors to this decrease.

Wild Ones, a non-governmental, nonprofit organization with a mission to promote environmentally sound landscaping practices and preserve biodiversity, now has a Long Island chapter, created in February by a handful of Merrick residents. The organization doesn’t necessarily want to restore the forests Long Island once had, but rather save what is left.

Municipalities across the Island have tree ordinances, and some are very strict, according to Fred Nass, the group’s president. What the group hopes to eventually accomplish, in working with the Town of Hempstead, is to have the town’s tree removal guidelines changed and encourage residents to learn and care about their trees.

“With our Long Island environment, we know what the problem is — we see the numbers and pictures of where we used to be to where we are now,” McLaughlin said. “You have to make sure, that with what you’re talking about, you’re organized, and it’s a topic that you care about.”

In the Town of Hempstead, according to guidelines under its Highway Department, if a property owner wishes to hire a contractor to remove a tree, or remove a tree themselves, they must apply for a $25 Tree Permit.  Permits are not granted for healthy or growing trees. Permits, if approved, are mailed to the applicant.

According to Wild Ones, a strict tree ordinance in the neighboring Town of North Hempstead passed last year. There are many factors when determining if a tree can be cut down, including its size, the rarity of the species, and the historical value of the tree.

The ordinance states if a tree with a diameter of 6 inches or greater, at 4½ feet, is removed, the property owner is subject to tree replacement guidelines, which means one to three trees must be replanted within 90 days of the previous tree’s removal, between April 1 and Dec. 1.

Wild Ones hopes to see a similar ordinance created in the Town of Hempstead.

Weather-related questions were raised about storms potentially causing a tree to fall on a house as reason homeowners may want trees removed. McLaughlin said trees fall when they are not properly cared for and there are ways to preserve their life, without chopping them down.

“Most of the time, trees that are ripped up, fall, or cause damage, have more to do with being in the wrong place to begin with,” she said.

McLaughlin said, when large species of trees were planted, it was not taken into account the amount of space they’d need to grow. This causes uprooting and soil compaction, which can cause a tree to deteriorate and fall in the case of a storm.

Man-made solutions, such as structural soil, are porous and allow ample room for roots to grow. McLaughlin said the area a tree was planted can also be made larger.

“You can expand it, and dig around the root system, even if the tree has been planted for 20 years,” she explained. “You get a little bit of movement, a little bit of oxygen in there, and that will help cultivate the soil and help the tree reestablish itself in a healthy way, and to stay hardened even in storms.”

Nass said Wild Ones contacted Tricia Moriates, Counsel to the Town’s Comptroller. In an email correspondence from early August, Moriates informed the organization the town was preparing a newly drafted tree preservation code, to be completed likely sometime in September. The town is open to meeting with the group, to hear its recommendations and opinions, before the ordinance moved onto official hearings.

In the interim, the group is working with local school districts to implement workshops and programs that encourage students to learn about trees and tree maintenance.

To learn more about the greater-Wild Ones organization, visit WildOnes.org, and to reach the Long Island chapter, contact wildoneslongisland@gmail.com.