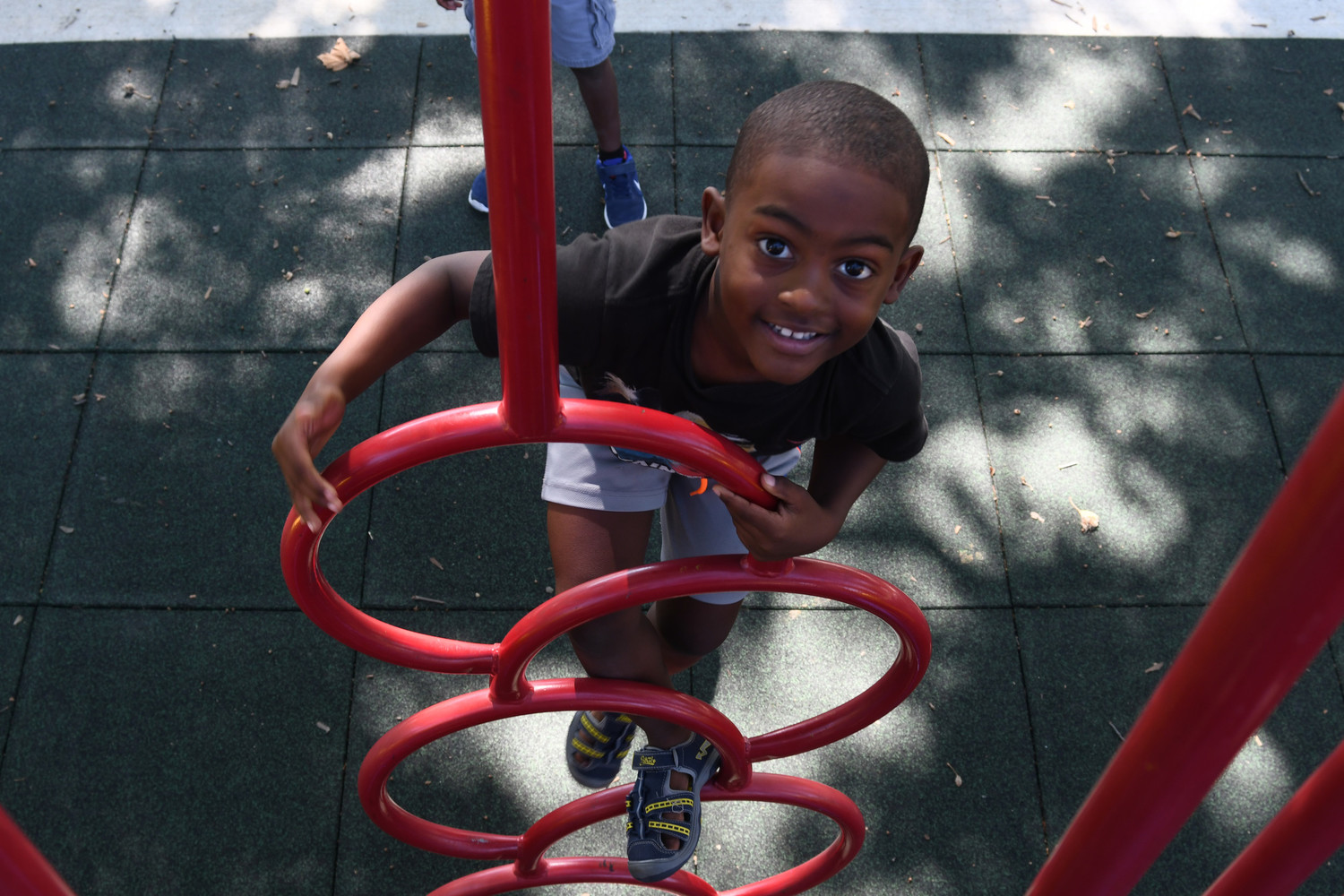 Kaleb Suchit, 5, helped break in a new playground at Greis Park when it opened last summer. Village officials are accepting bids for a master plan to redevelop the park.
Andrew Vardakis/Herald 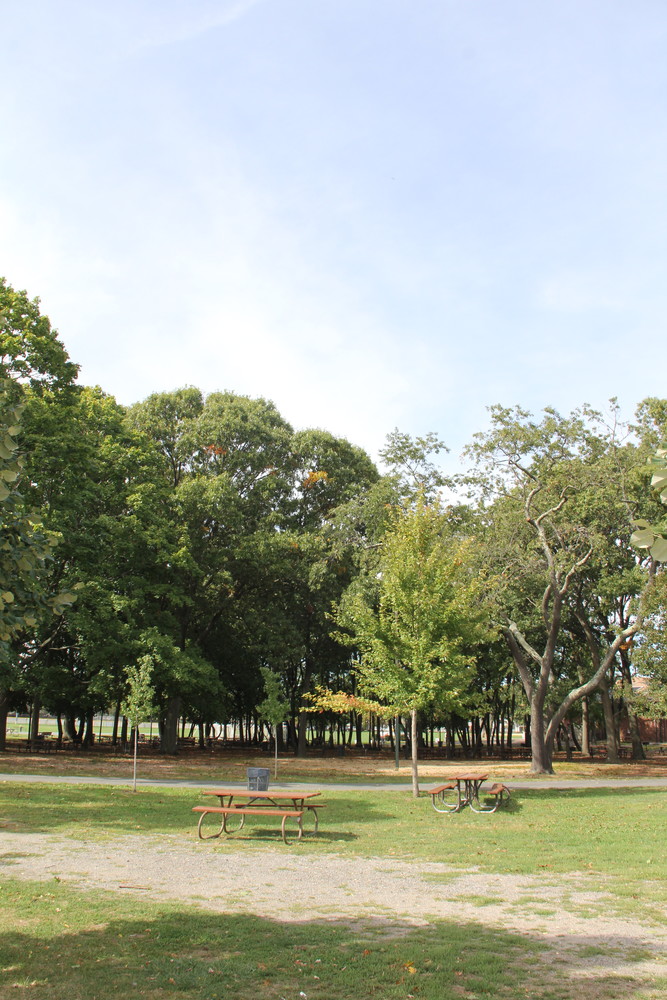 The master plan will involve gathering feedback from residents about what they want to see in the park.
Christina Daly/Herald 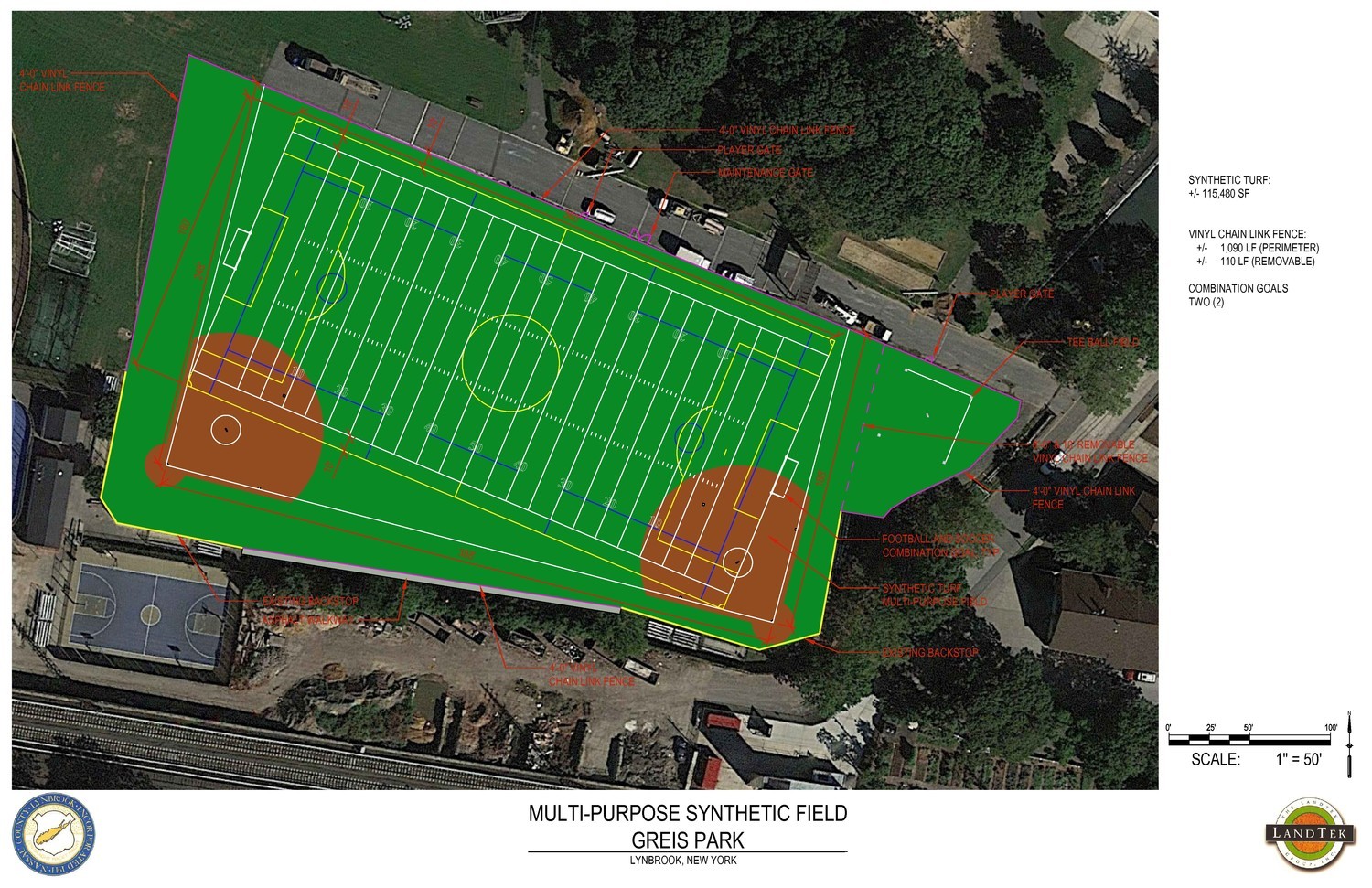 In March, Representatives of the Amityville-based LandTek Group proposed building a $1.4 million artificial-turf field at Greis Park to the Lynbrook board. Village officials have expressed interest, but are still thinking it over.
Courtesy The Landtek Group
Previous Next
Residents react

The Herald asked residents what changes they would like to see at Greis Park:

“Something over the pool so it can be open year-round.”

“A dog park for residents only.”

“Inclusive playground area for all kids, typical and special needs.”

“Make the pool available to residents on a daily basis with an appropriate fee. Better picnic area and something for older kids like rock climbing or a mini-zip line.”

“Would love to see an indoor turf field in an expanded [recreation] center.”

“Wheelchair access and ramps to picnic areas so you don’t have to wheel on the grass.”

“An aerobics studio for fitness classes for adults and kids and a gym.”

“Walking trails and a track for community members to use.”

“A facility that has workout classes, indoor basketball courts and that offers other classes to residents.”

Lynbrook Village officials are considering bids by engineering and architectural firms to develop a master plan to overhaul the 18-acre Greis Park, in the heart of the village.
“The intent of this plan is to gather community input,” Mayor Alan Beach said. “The master plan is intended to give an objective, unbiased opinion to the board based on community input on programs and facilities.”
Greis Park, on Wilbur Street, has athletic fields, trails, picnic areas and playgrounds. Many of the community’s recreation programs, including its youth leagues, play there, and it is the site of several annual events, including Patriots’ Day, on Memorial Day eve. The park also is home to the village pool.
Tyler Silverstro, of Marvel Architects, which has offices in New York City and Puerto Rico, presented ideas to the village board on June 4. Kevin McAndrew, of Woodbury-based Cameron Engineering, also met with officials that night, while Tom Deihl, of GreenPlay, in Louisville, Colo., made his pitch June 18. The three presented preliminary ideas and suggestions, not finished plans.
Silverstro said that Marvel Architects has designed similar projects on Long Island and in Brooklyn, among other places. He spoke of potentially adding walking paths between the playgrounds and installing canopies for shade. He added that the park’s main building could house more events and programs.


“That place has a ton of potential,” Silverstro said of the park. “I think what we bring to the table is restoration and renovation, and a reconditioning and reprogramming of the building.”
McAndrew, who has been with Cameron Engineering for 19 years, said he was familiar with Greis Park because he was involved in master planning for the pool complex. “A typical master plan looks out somewhere within a 20-year period,” he said, “but it’s also possible to have prioritized interim goals.”
McAndrew said he would be involved in the development of the master plan throughout the process, and Cameron Engineering would gather a great deal of community feedback if it were to win the bid. The community’s ideas would be incorporated into plans, he said. Cameron Engineering has designed similar projects in Bay Park, East Rockaway, Rockville Centre, Manhasset, North Hempstead and Floral Park, he added.
Deihl said that GreenPlay has managed $60 million worth of projects. If the company won the bid, he said, representatives would develop a relationship with the project manager and keep in touch with weekly phone calls.
According to Deihl, the master plan would be developed in phases. First, GreenPlay representatives would learn about the community and residents’ needs and desires, host discussions with officials and park staff, conduct a survey, design the park and facility based on feedback, and then recommend updates, changes or additions to the grounds.
“It’s called a road map,” Deihl said. “It should last you for the next 10 years.”
The survey would be mailed to 3,000 randomly selected homes in the village, Deihl said, followed by a larger survey for which all residents could vote on changes at the park. The company would then host public meetings and update plans based on people’s desires before a final plan were drafted. Designers would spend a day in the park, he added.
Beach said the board plans to choose a company by summer’s end. Funds for the design work were included in the 2018-19 village budget, he said, but he did not specify how much money was allocated. He did note, however, that the board would negotiate the price once a bidder was awarded for the project.
Beach also addressed the possibility of adding an artificial-turf field at the park, to be installed before construction work on the master plan begins.
Greis Park has four fields, labeled A through D. The turf field would be installed on fields C and D, in the southern portion of the park, near the basketball court, the Long Island Rail Road tracks and the Lynbrook Fire Department’s training center, where there are now baseball fields. Former Jets star Marty Lyons met with the board on March 5 on behalf of Amityville-based LandTek Group to pitch a proposal to install turf fields. Beach said that village officials are talking to more than one company to gauge a price and would use bonds to pay for it.
Lyons spoke of a plan to install a 121,825-square-foot field for football, lacrosse, soccer, softball and baseball. In addition, two brown turf baseball diamonds would be built on the southeast and southwest sides of the field, and there would be a T-ball field.
Beach said that because so many local residents use Greis Park, the board is determined to give it a makeover. “This is really our jewel,” he said, “the only thing we really have in the village that everyone uses. We’d like to see it taken up a level.”
Report an inappropriate comment