Locals’ lives are dependent on venue’s schedule, one nearby homeowner says 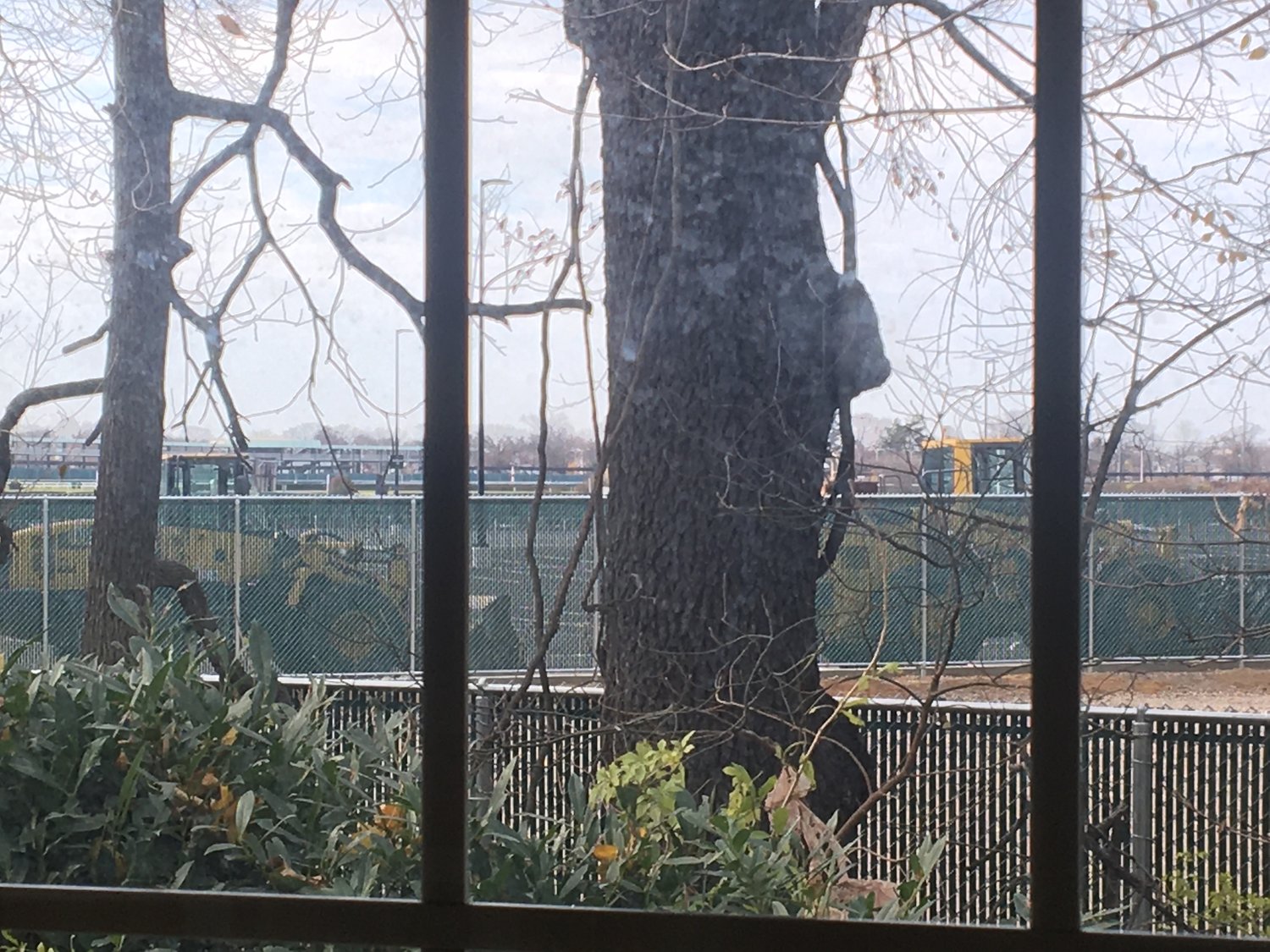 Construction at the UBS Arena, as seen from the window of a house in Floral Park, of which some are 1,200 to 1,500 feet away from the arena.
Courtesy James McGovern 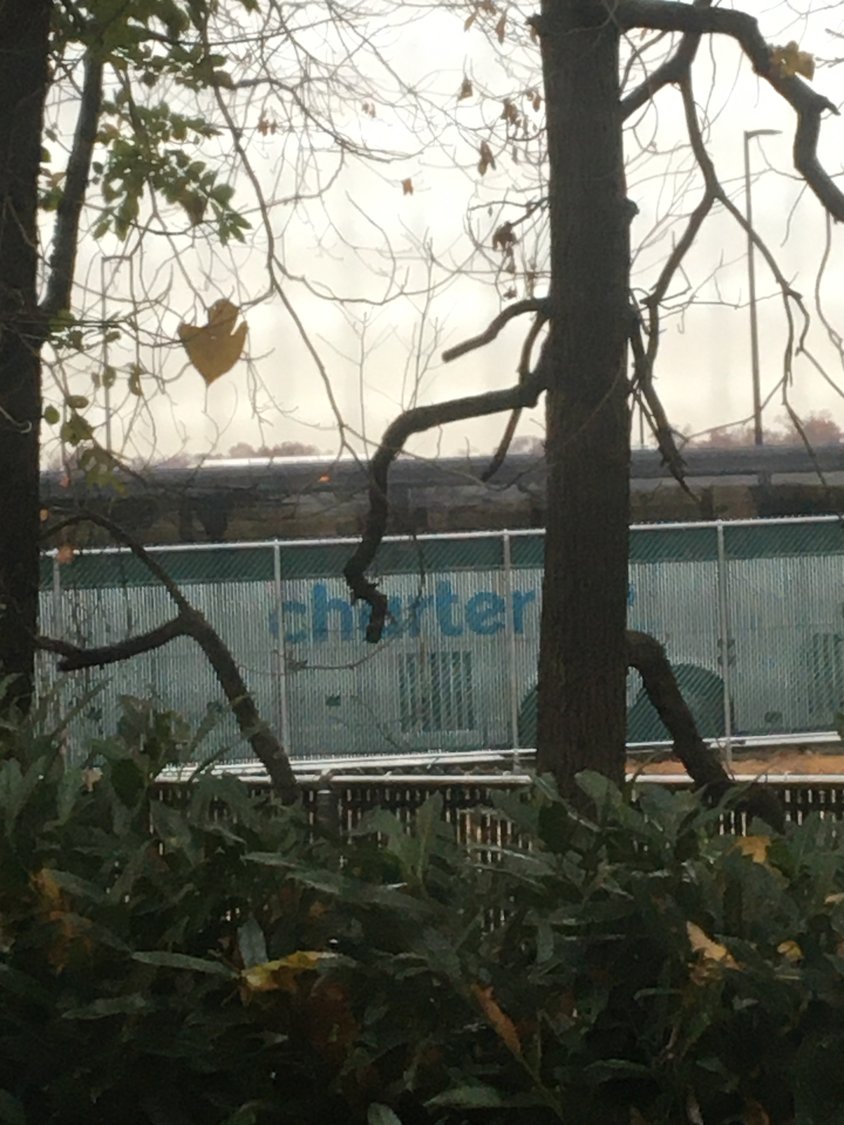 The view of a diesel-powered shuttle bus provided by the arena from the home of James McGovern.
Courtesy James McGovern
Previous Next

Months after expressing concerns about construction at the UBS Arena in Elmont, Floral Park residents who live close to the arena — within 1,500 feet of it — are voicing complaints about horn honking, triggered vehicle alarms, public urination and other disturbances after events at the arena.

Bill Kelleher, of Floral Park, who has accused arena developer Empire State Development of failing to clearly communicate construction plans for the building’s Emerald parking lot, has also expressed concerns about the quality of life for homeowners in the neighbohood.

Kelleher described the Emerald lot, formerly known as the north parking lot, as “the bane of my existence.” Since the arena opened in November, Kelleher said, he and his neighbors have been subjected to late-night horns and other noises from arena-goers. Although New York Arena Partners put up signs prohibiting tailgate partying and honking in the parking lot, Kelleher said that both have become common.

He also said he had seen people hop over fences bordering the arena to avoid paying for parking, as well as public urination in the Emerald lot, which, he added, was “witnessed by many people.” Kelleher’s neighbor James McGovern said he had witnessed public urination in the lot during the New York Islanders’ home opener in November. He saw it, he said, near vegetation placed by NYAP to shield the yard of the Floral Park-Bellerose School.

Kelleher and McGovern have reached out to NYAP about these issues. The last update they received, Kelleher said, was a Dec. 21 email from NYAP stating that Nassau County police officers were patrolling the parking lot and were stationed along the fence separating Floral Park and the Floral Park-Bellerose School from the arena to “make sure [public urination] doesn’t happen.”

Kelleher said that loud noise has become the norm for those living close to the arena after every event. He cited the chorus of remote locking and unlocking signals before and after events by patrons leaving, and then searching for, their vehicles, as well as car alarms that sometimes blare for 45 minutes to an hour before the parking lot empties at around midnight.

State Assemblywoman Michaelle Solages, who has worked with Kelleher and McGovern to try to address their concerns, has said she wants to find a solution that alleviates stress on residents. “I encourage all parties to come to a resolution that works to protect the community and the community’s quality of life,” Solages previously told the Herald.

Kelleher and McGovern both live on one of three dead-end blocks adjacent to the Emerald lot, near a fence that stands eight feet tall and was designed to reduce noise. Kelleher said that he, McGovern and other residents have resorted to “self-policing” the area, notifying NYAP when they see issues. “We’re telling them what their problems are,” Kelleher said.

In addition, due to the slow rollout of electric shuttle buses that will bring patrons to the front of the arena, the facility has instead provided diesel-powered shuttle buses, which, Kelleher said, often idle before and after games, within earshot of Floral Park residents. “The diesel buses are noisy, emit fumes and make a beeping sound when backing up on their route,” McGovern said.

As well, residents who live on the block closest to the arena, 40 to 50 feet away from the fence, are subjected to bright lights from vehicles leaving the arena at night. “Most of the issues around here are at night, from headlights coming into our homes,” McGovern said. “NYAP still have not placed any bushes along the lot by homes, which would help with the headlights.”

Kelleher said that NYAP has told them it is pursuing measures that would mitigate noise, such as additional fences and vegetation. But three months after the opening of the arena, there is no time frame for these measures, Kelleher said.

Residents’ lives are dependent on the arena’s schedule, he explained. “If it’s an Islander game, we’re looking at chanting and horn honking. If a concert ends at 10 o’clock, then between 10 o’clock and 11 o’clock we’ll have horn honking before people get out … Unfortunately it’s a sad way of life.”