Giveaway on August 13 to provide backpacks, supplies to students in need 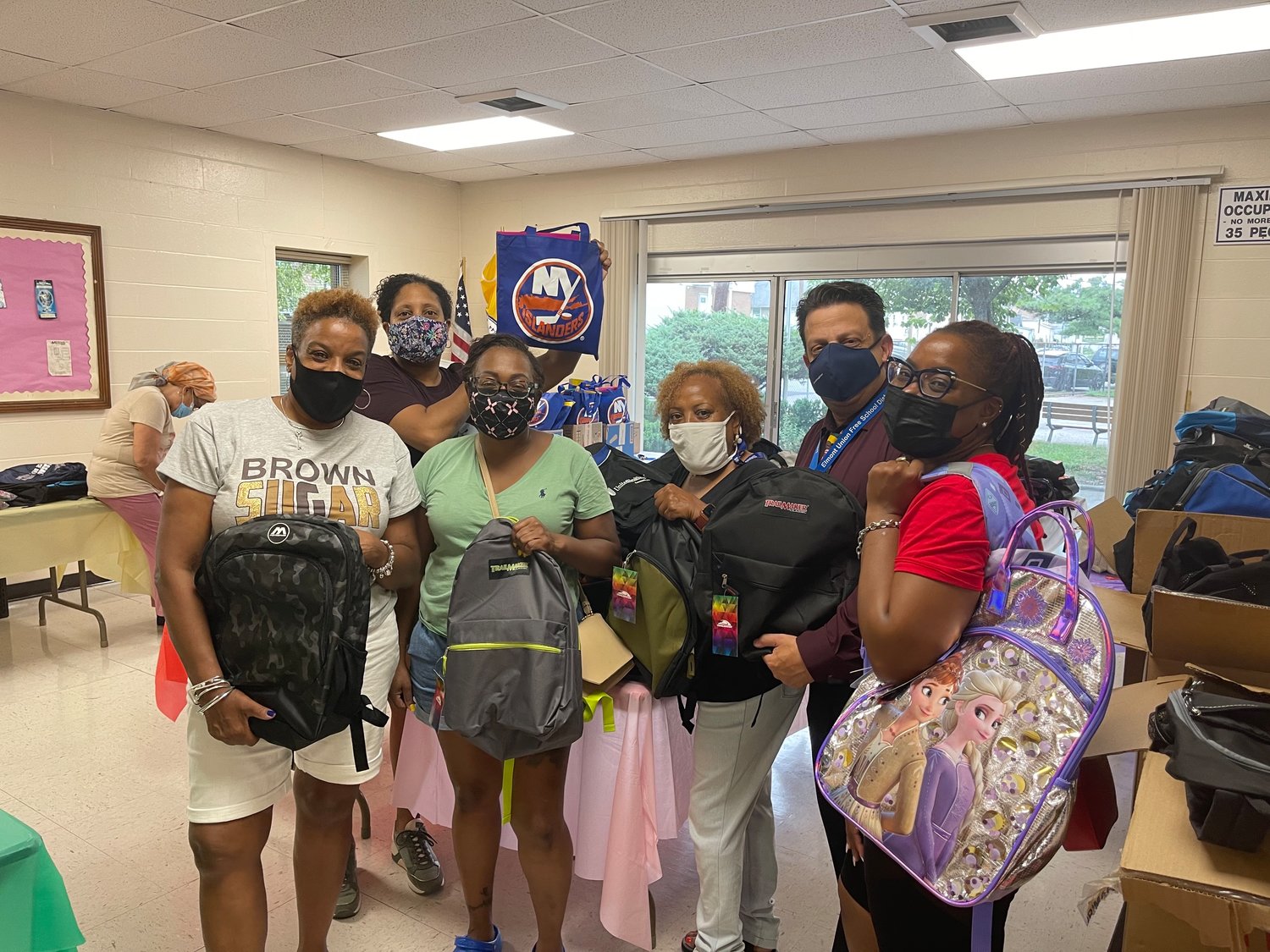 Claudine Hall, pictured third from right preparing for last year’s backpack giveaway, said the goal of the annual program is to serve local students and families from all the schools and areas in Elmont.
Courtesy Claudine Hall
By Robert Traverso

A back-to-school drive providing free backpacks and school supplies for students who attend schools in Elmont will be held on August 13 by the Jamaica Square Improvement League for local students.

“For every child that gets one, that’s one less child who won’t have one,” said Claudine Hall, the president of the civic group, about the second annual giveaway, the goal of which she described as to help Elmont students and families in need.

The civic group, which works to serve all members of the Elmont community, donated over 300 backpacks to Elmont families at its 2021 back-to-school drive at Hendrickson Avenue Park.

Because Target and Staples not providing backpacks for the 2022 back-to-school drive, less backpacks and supplies are expected to be donated this year despite the high demand for help, Hall said.

However, donations are pouring in from a variety of local sources, including various civic groups, Elmont community members, the 5th precinct of the Nassau County Police Department, as well as members of Hall’s sorority, Delta Sigma Theta the community leader said. A neighbor of Hall’s collected 27 backpacks, the New York Islanders donated 100 school supplies and the Town of Hempstead placed boxes in three locations to collect backpack supplies, she added.

Also the vice president of the food pantry at the Emmanuel Baptist Church in Elmont, Hall helped organize donation drives on Saturdays for 18 months amid the height of pandemic, where she learned how much support families in need across Elmont require.

Hall grew alarmed when long lines of local families at the food pantry persisted despite the drop in coronavirus positivity during one of the early spikes of cases. This trend, she said, remains despite the pandemic’s retreat. Just this week, the pantry bought enough meat for 100 families, and all that food was used by families, Hall said, adding that the rise in food and gas prices have added to the previously existing economic distress of local families in need.

Hall said the goal of the back-to-school drive is to support families in need across the whole of Elmont, and not just in Jamaica Square or other subsections of Elmont.

“I live in Jamaica Square, but I also live in Elmont, which is 11003,” Hall said. “I have to try to help every child,” the community leader added, stressing that the giveaway is for all of Elmont’s students.

Hall, who said that she never lacked meals or school supplies despite growing up in a single-family home after her father died when she was 10 years old, said the event is a way for her to give back to the Elmont community.

“This is where I began … I feel that it’s my responsibility, it’s my blessing back to the community because of the way God blessed me,” the community leader, who attended Elmont schools, said.

Hall added that she hopes to one day hold a largescale backpack giveaway coordinated together by all the civic groups in Elmont.