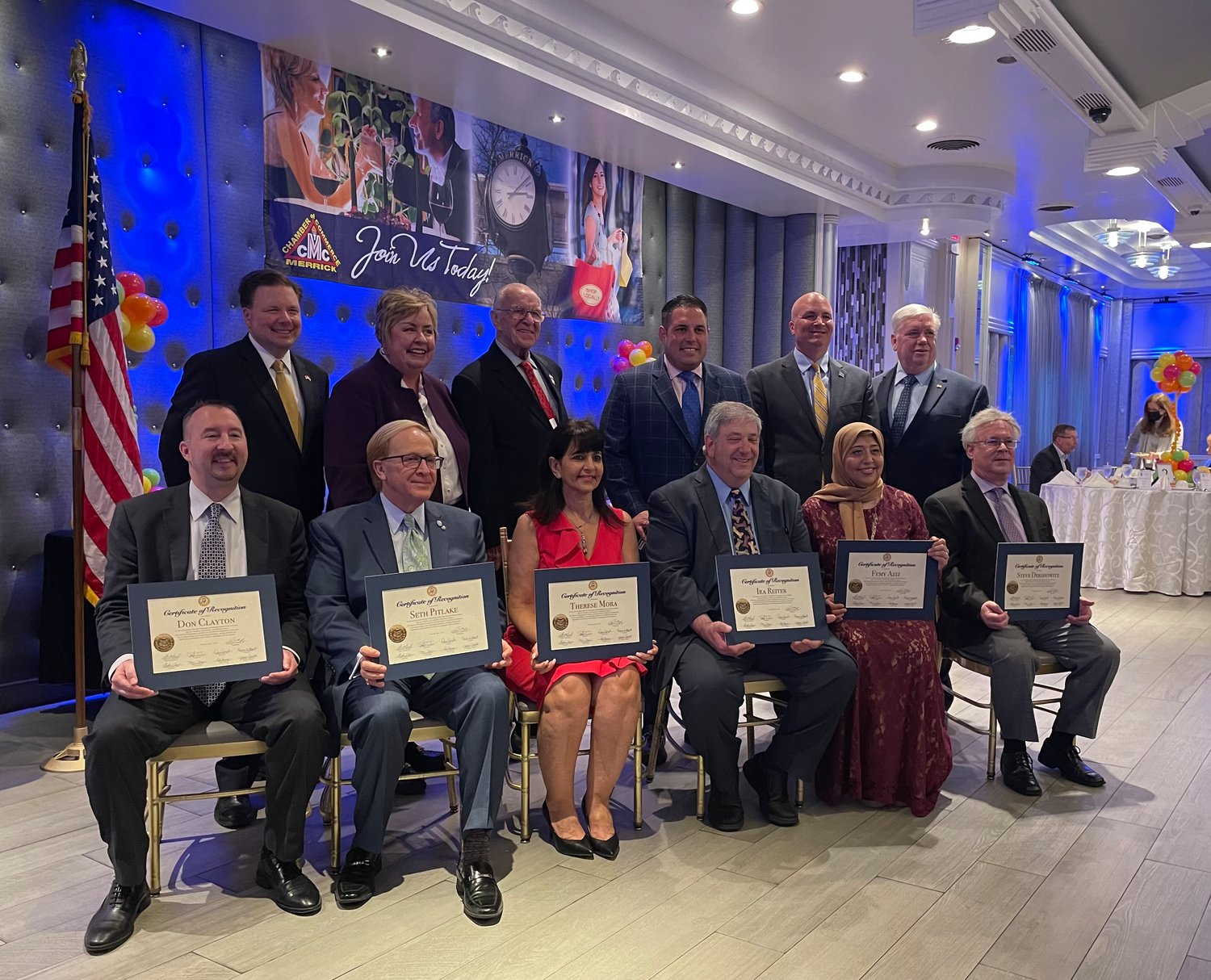 - Man of the Year, Ira Reiter

- Woman of the Year, Femy Aziz

- Merchant of the Year, Steve Dershowitz

- Professional of the Year, Seth Pitlake

Gathering for an in-person dinner for the first time since the start of the coronavirus pandemic, the Merrick Chamber of Commerce installed its leaders last week at the Chateau Briand in Carle Place. At an event attended by chamber members, local politicians and members of American Legion Post 1282, the chamber’s man, woman, merchant and professional of the year were all honored.

The color guard from the American Legion kicked off the evening, followed by the Pledge of Allegiance, led by Sharon Davis, a member of the chamber board of directors. Anne Ruvolo-Guercio, a past winner of the chamber’s Woman of the Year, sang the national anthem. The evening’s activities were coordinated by board member and event chairwoman Julie Marchesella.

“This is where the hometown is,” State Assemblyman Dave McDonough, of Merrick, told the crowd. “What you’re doing is great, and we’re so happy to honor those people who’ve been selected tonight — you’ve received the awards for your outstanding achievements.”

The chamber’s Man of the Year, Ira Reiter, who has also been its president since 2020, has been involved in the organization since 2003. He owns the Barking Biscuit LLC with his wife, Hilary. According to a chamber handout, Reiter is a regular at festivals and weekly markets, and at the beginning of the pandemic, he collected donations and put together 800 gift bags for staff members of area nursing homes.

Femy Aziz, the chamber’s Woman of the Year and its immediate past president, opened her photography studio, Serengeti Design Studios, in 2008. Since then she has also been recognized by the Nassau County Chamber of Commerce and Merrick Kiwanis. As chamber president, she worked with board member Randy Shotland to design and install an LED-lit sign at the corner of Merrick Avenue and Sunrise Highway, a cost-efficient advertisement for the group.

At the ceremony, Reiter thanked essential workers, the local fire departments, the Nassau County Police Department and the American Legion as well as many others who make the chamber’s yearly events possible. He also thanked Aziz. “The transition from Femy to me was very simple,” Reiter said. “It was very easy to communicate. We just went from one board right to the next, without skipping a beat.”

Steve Dershowitz, of the Kumon Math and Reading Center, was honored as the Merchant of the Year, and Seth Pitlake, a real estate agent with Douglas Elliman, was the Professional of the Year. The Community Partnership Award was presented to Therese Mora and Dan Clayton, of Investors Bank.

Throughout the evening, attendees noted that this was the first time in nearly three years that the chamber had celebrated an installation in person. “We are at a very tough time, and I thank everyone that did everything that they did,” Reiter said. “We have moral support from our local officials — they are key in helping us do everything that we do. Anything we ask for, they find a way to come through.”

“When we look at all of our members here tonight, particularly all of our storeowners and our chamber officers — the work that you do — you are the lifeblood of our town,” said Mike Reid, chief of staff for State Sen. John Brooks, who was unable to attend. “It is only right and proper that we are here tonight in honor of all of you.”

“You are the true heroes over the course of the last few years,” County Legislator Steve Rhoads added. “From all of the challenges you’ve faced, with shutdowns and uncertainty about your businesses, you still continue to contribute to making Merrick the very special community that it is.”