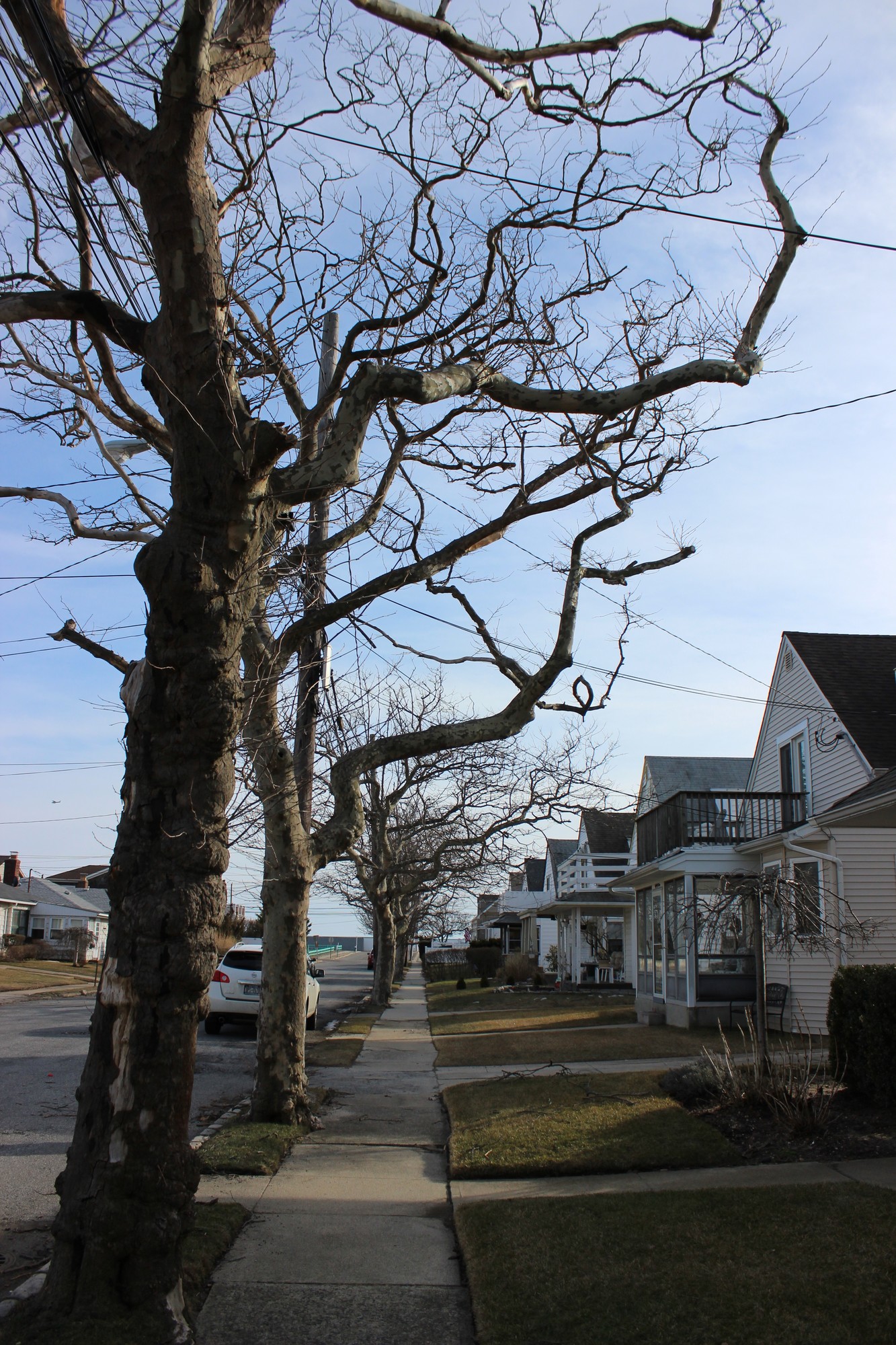 The Village of Atlantic Beach is beginning a tree removal program within the next two weeks. Along Bermuda Street, several trees are due to be cut down.
Vanessa Parker/Herald
By Vanessa Parker

Up to 300 trees that died due to Hurricane Sandy-related damage will be cut down throughout the Village of Atlantic Beach at a cost of $124,025. Removal of the tree is expected to begin in two weeks, village officials said.
Huntington-based Landscapes by Paul Doreste, Inc. won the bid for the work, Atlantic Beach Mayor George Pappas said. The announcement was made at the village’s March 9 meeting. The work will be done in conjunction with PSEG Long Island. “This is FEMA (Federal Emergency Management Agency) reimbursed,” Pappas said. “It is at no cost to our taxpayers.”
The trees died when salt water seeped into the roots. When salt in the soil dissolves, it separates into sodium and chloride ions and their presence damages the tree, according to George Hudler, professor of plant pathology at Cornell University.
“Once there is salt water in the soil, it is taken up by the trees,” he said. “Sodium chloride from the salt water collects at the roots. Sodium ions travel the same ‘chemical route’ as necessary tree nutrients. Those ions tie up the plant’s shuttle system and restrict uptake of magnesium and potassium, two chemicals that are essential for making chlorophyll.” The water carrying nutrients becomes slowed down in movement, and eventually blocked by the chloride ions, causing leaf curling and death.
Hudler explained that potassium deficiencies are common in plants suffering from salt injury and salt in the soil causes drought. “Brine near underground tree roots can be a more concentrated solution than the sap in the roots,” he said. “The roots therefore can’t take in water through osmosis. Water is so unavailable to salt-stressed trees that they are actually dying of thirst. Conifers and spruce trees usually have issues. It’s a physiological drought. With a lot of salt, it breaks down soil and compacts clay. The soil and clay can set up like concrete.”


Pappas said that Department of Public Works Superintendent, Steve Cherson, is researching the different types of trees that could be planted and is coordinating the reimbursement process with FEMA. “We’re looking to replace the dead trees with ones that will survive in our climate,” Pappas said. “What trees do other beach villages plant, and how do they survive?”
Atlantic Beach resident Steve Patterson is relieved that the tree removal process is starting. A 22-year resident of Bermuda Street, he has been concerned about the dead trees falling down. “Somebody’s going to get killed,” he said. “My own trees came down right in front of me. My kids here and those across the street, I worry about the most. Branches are going to come down and could land on someone or the power lines. If you look at the bark closely, you can see holes in the trees, all up and down the tree trunks. No birds or squirrels even go anywhere near these trees anymore. These trees have no life, no leaves.”
Steve Wasmuth, also of Atlantic Beach, believes the tree removal process benefits him and his neighbors. “I’m very lucky, but if you look at the trees across the street or down the block, they’re all dead,” he said. “Power could have been lost if a tree just happens to fall because it’s dead.”