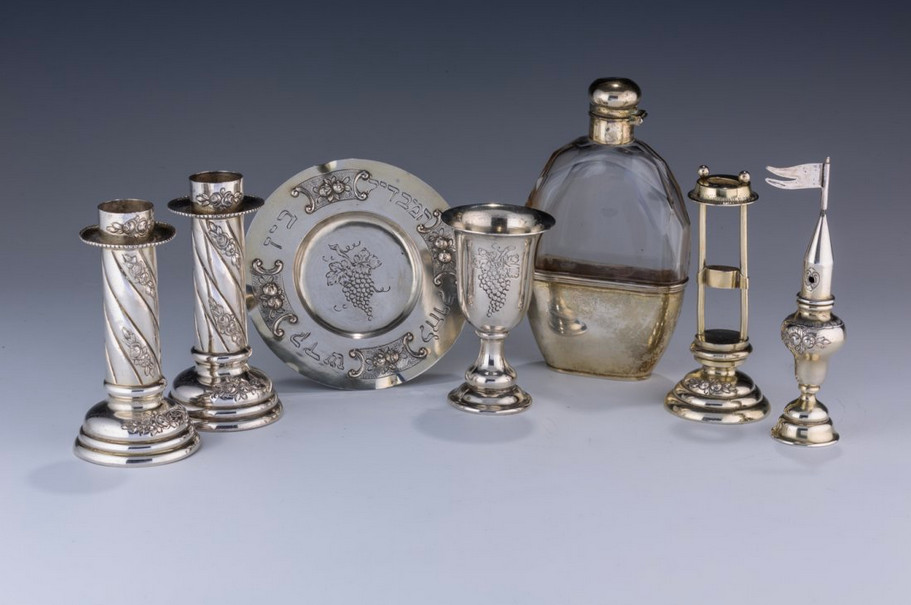 An 1880 traveling Sabbath set with candlesticks and Kiddush cup will be auctioned at J. Greenstein & Co., Inc. It is from the collection of Jakob Michael, a lifelong collector of Jewish ritual art.
Courtesy Jonathan Greenstein
By Vanessa Parker

Cedarhurst-based Judaica retail gallery and auction house J. Greenstein and Co., Inc. held its second large auction of the year on Monday at its storefront at 417 Central Ave. In existence since 2009, it is the only one in the world that is devoted to Jewish religious art. Their focus is on religious art ranging from the 1600s to 1938.

The gallery has six total auctions per year, including two major events, where the auctioned items garner much higher prices than a typical auction, said gallery owner Jonathan Greenstein, who has 29 years of evaluating genuine Judaica pieces.

“Generally throughout the year, our items we auction generate between $50 to the $1,000 range,” he said. “At our major auctions, the items start at $1,000 and range up to $150,000. We don’t have a problem with items being underbid on, and they’re generally within their estimates.”

Greenstein focuses on Judaica items such as menorahs, Kiddush cups, spice boxes and general Jewish artwork such as paintings and drawings. As an expert appraiser, he must determine an item’s authenticity.

“In determining whether something is real or fake, that is my biggest challenge,” he said. “Deciding if something is an antique is sometimes difficult, as there was very little art not destroyed by Hitler. The value of an item is based on its rarity, its aesthetic beauty and how it was appraised in the past.”

People come to Greenstein and his auction house after finding information abut the gallery on the Internet. Collector and artist Thomas Gelb of Staten Island came to America with his parents, both Holocaust survivors.

“I was born with a “meshugaz” (destiny) in me to collect,” Gelb said. “Being Jewish and Czech, I always wanted to own a piece of my history. I was lucky to get my hands on a Prague Besamim — a spice tower— in the shape of a beautiful tower of my hometown. I started adding on to it, and it became a craze and grew into an amazing collection.”