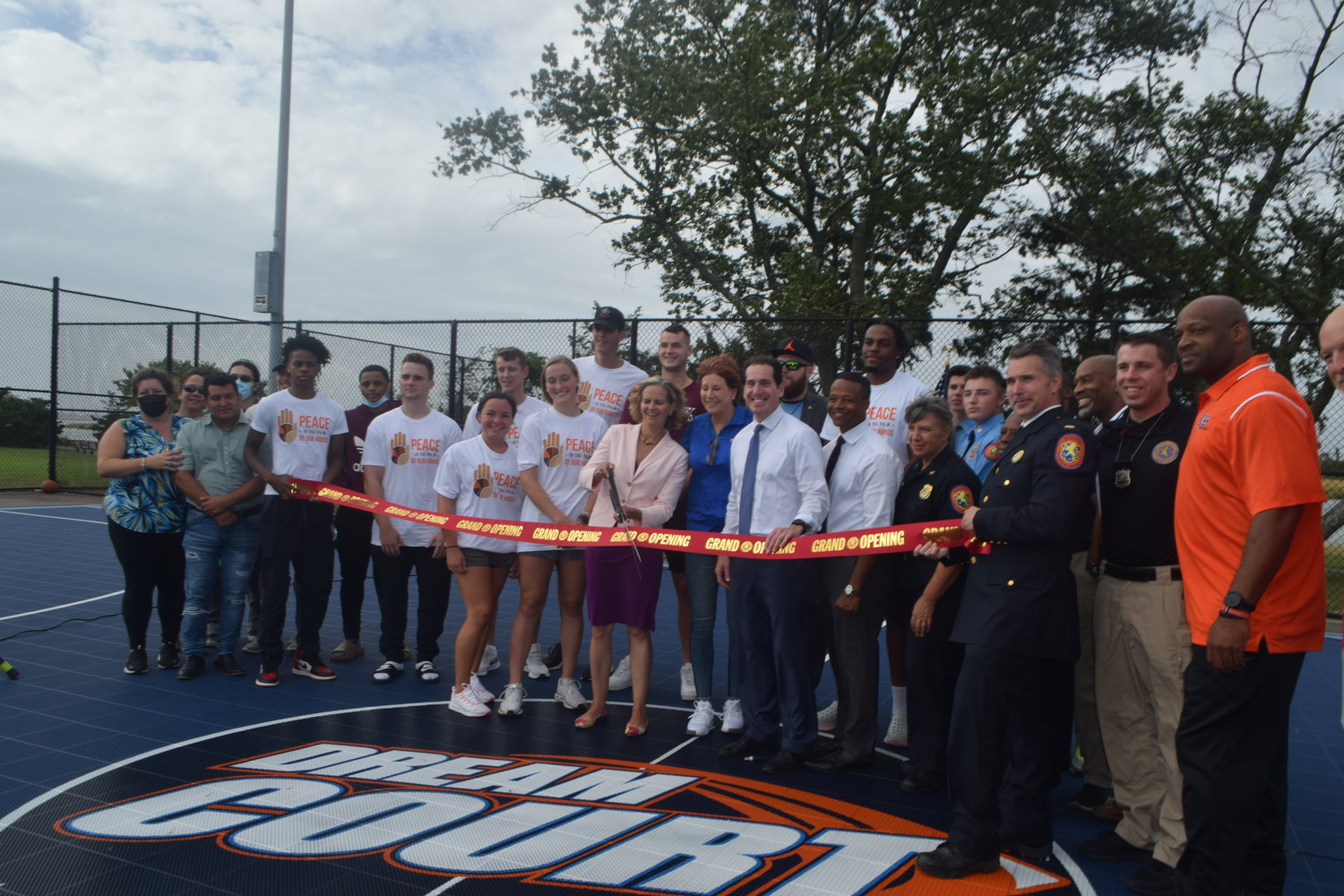 A 'Dream Court' was installed at Inwood Park through a partnership between Nancy Lieberman Charities and Nassau County.
Jeffrey Bessen/Herald
By Jeff Bessen

Far Rockaway, New York is 775 miles from Louisville, Kentucky, however on Sept. 23 in Inwood Park basketball icon Nancy Lieberman made the two places as close as Nassau County and Queens.

“I fell in love with a guy who was the heavyweight champion of the world when I was 10 years old,” Lieberman said as she stood at the lectern that was placed at center court of one the five places that her Nancy Lieberman Charities has placed or will place a “Dream Court” a total donation package of $325,000 from the Dream Court™ program. “His name was Muhammad Ali,” she added. “I listened to everything this man said. He was my eyes, he was my vision, really, he was my path.”

Growing up poor in Far Rockaway, Lieberman said she hid her insecurities by playing basketball. Neighbor, Mark Munchnick, served as a mentor. “When I was growing up and just starting to play ball it was Mark and his brother, but Mark was older, he would drive us to parks all around,” Lieberman said. “He was one of the first people who introduced me to Inwood Park, and to come out here and play and to compete, and get the crap knocked out of me on occasion, but it toughened me up and it made me bigger, better and stronger.”

That helped Lieberman become a high school basketball star and led to her be the youngest hoops Olympian, who helped the United States woman’s team capture silver at the 1976 Montreal Olympics. At Old Dominion University in Virginia, she was part of championship teams and was the national basketball player of the year. But meeting her idol bowled her over.

“I was asked to come back to New York to do an appearance at the New York Stock Exchange,” she said. The other athlete that night was Muhammad Ali. When we walked into this room, I couldn’t breathe. It wasn’t until Muhammad Ali put his arm around me and said ‘they’ll never be a day that I’m not in your life,’” this is a kid from Far Rockaway, a kid that played on this court. To the day we buried Muhammad Ali 5 and a half years ago in Louisville, he was there every day for me. We all need somebody, we all need mentors, we all need people that care about us. I got blessed with Muhammad, and his love and his kindness.”

Nassau County Executive Laura Curran noted the courts have an impact beyond just playing basketball. “This gift will provide our children with a safe place to build friendships, to learn sportsmanship, to create community, to be outside and exercise,” she said.

The connected with the county began with a phone call to State Sen. Todd Kaminsky. “This court says that someone cares about you,” he said, speaking to the Nassau County Explorers, Molloy College basketball players and the young people from the community that attended the event.

Other courts will be installed in North Woodmere and Wantagh parks and possibly Eisenhower Park, Nickerson Beach and the Five Towns Community Center. Officials said that grants might could be obtained to supplement the donation.

“We will keep pushing to improve the quality of life in our communities,” said County Legislator Carrié Solages, who represents Inwood.