Getting an education on the Middle East 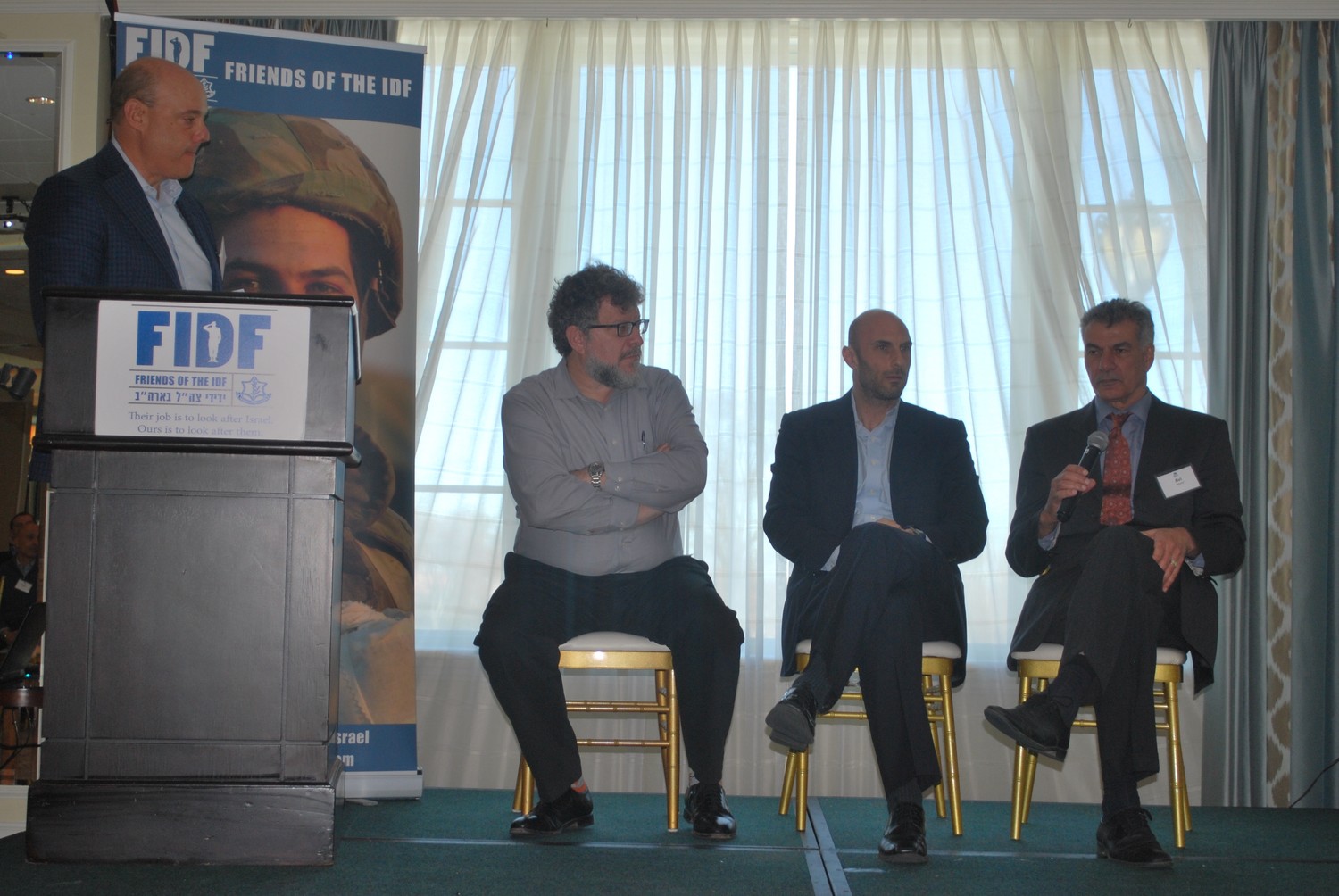 Rocket scientist Ari Sacher took the microphone in the second half of the Friends of Israel Defense Forces “Day of Learning” at the Fresh Meadow Country Club in Lake Success on March 11, as if he was doing a set at Governor’s Comedy Club in Levittown.

Sacher humanized the fact that the Iron Dome protective rocket system invented by him and several others a decade ago, helped by $1.4 billion of U.S. money, has shot down more than 1,700 rockets aimed at the Jewish state in that time period, which is over 90 percent. “Missiles are like gifts,” Sacher said, it’s better to give than receive.” That drew laughter from the roughly 100 people who attended the four-hour event.

Sacher, who has also appeared on many global media outlets, was joined by Avi Jorisch, a senior fellow for counter-terrorism at the American Foreign Policy Council and founder of Red Cell Intelligence. It provides consulting and training services on national security issues relating to counter-terrorism, radical Islamist movements at war with democratic societies, illicit finance and homeland security; and Avi Melamed, a former Israeli intelligence official and senior official on Arab affairs.

FIDF Long Island Chairman Ronny Ben-Josef said this was a “day of giving back to our supporters.” Long Island supporters raised more than $2 million at the 2017 dinner, and in its 13 years the chapter has raised more than $30 million for an organization with 20 chapters across the U.S. and Panama, and more than 150,000 supporters, Ben-Josef said. Founded in 1981 by Holocaust survivors, the FIDF offers cultural, educational, recreational and social programs and facilities to the IDF, especially “Lone Soldiers” those who go to Israel from other countries and Israelis who have no family.

Jorisch and Melamed both spoke to a “sea of lunacy” from their distinct vantage points. Jorisch recounted how being the child of Holocaust survivors has “framed his career.” He highlighted his education, including attending Al-AZhar University, the world’s second oldest surviving degree-granting institute, and noted that many of Al Qaeda’s leadership also went there.

Jorisch who’s most recent book “Thou Shalt Innovate: How Israeli Ingenuity Repairs the World,” addressed how innovation and making the world a better place is a large of Jewish culture. “It’s part of the social contract to take the mundane and make it holy,” he said. “One of the smallest countries in the world is making the biggest contributions.”

Noting that 60 percent of Israel is desert, the Jewish state is no not water dependent on neighboring countries. Through what is called “drip irrigation” water yield has been doubled. There are also six desalination plants that recycle waste water.

From the time of Muhammad to now, Melamed offered a short course on Arab history that included why the Muslim world is split between Sunnis (87 percent) and Shiites — Sunnis believe the best man should lead, Shiites believe in a blood line succession — and said that what was called the “Arab Spring” was the people wanting real answers from their leaders to real problems. “None of any of it has to with the state of Israel, yet it has everything to do with the state of Israel,” he said about the inner Arab/Muslim conflicts.

Sacher’s presentation included a touching photograph of his nephew on his wedding night with his new wife and in the background, there was an enemy warhead being intercepted. “No Iron Dome, no wedding,” Sacher said. So, we can live with some sense of sanity in a sea of lunacy.”