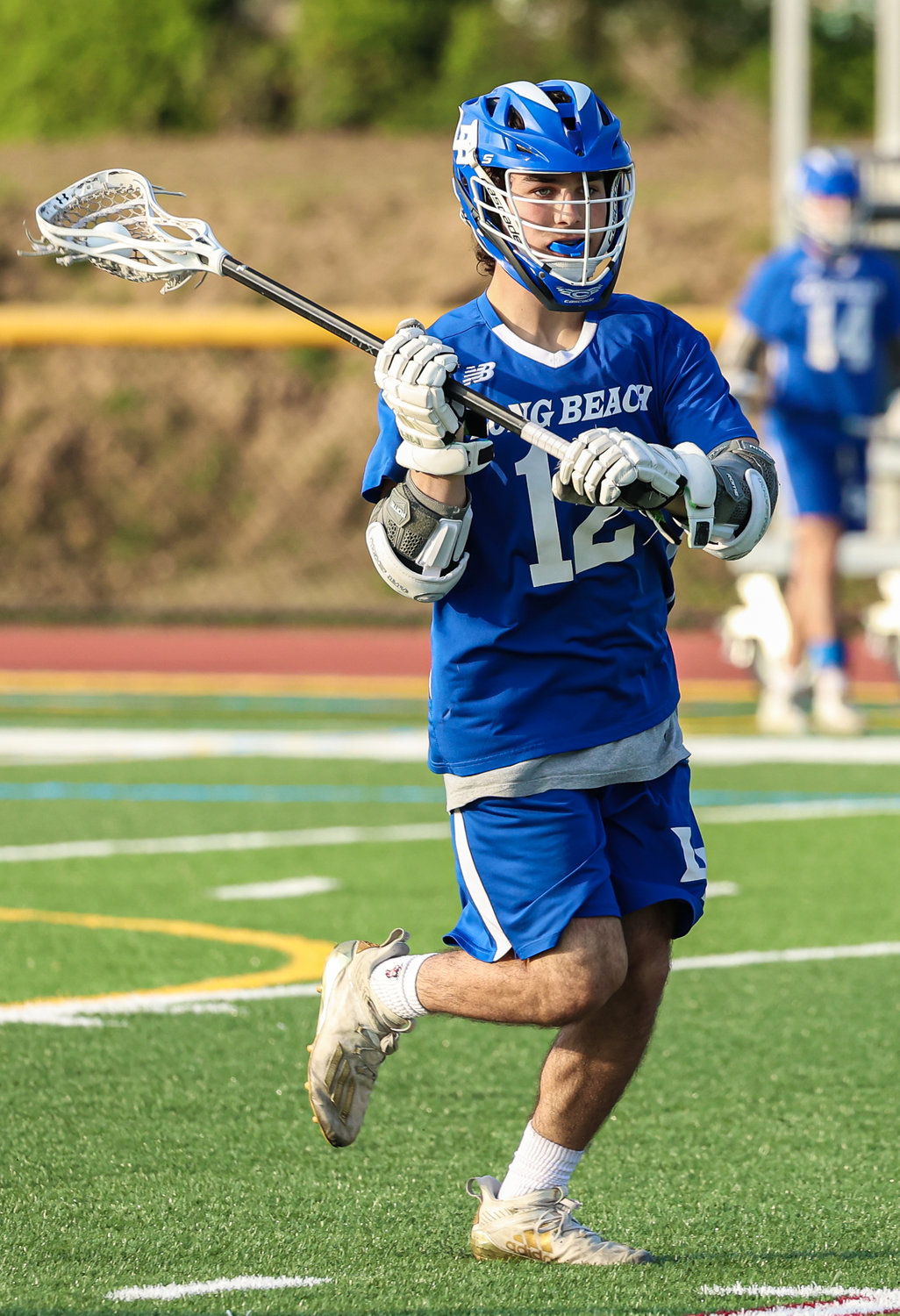 Christian Tarsia was a key helping hand on defense in Long Beach’s 7-2 victory over Roslyn in Monday’s Nassau Class B playoffs.
Karen Millindorf/Herald
By Tony Bellissimo

Long Beach is one of four teams still alive in Nassau Class B boys’ lacrosse.

Behind five points from junior Jack Miller and 11 saves from senior goaltender Wally Carroll, the fourth-seeded Marines advanced to the semifinals with a convincing 7-2 home victory over No. 5 Roslyn on Monday afternoon. It was the second meeting between the teams this month as Long Beach beat the Bulldogs 15-9 in conference play May 6.

“It feels good to be going to Adelphi for the semifinals,” Long Beach coach Jason Pearl said. “We figured this might not be as wide open of a game as the first time we played Roslyn, but we still wanted to come out strong and establish ourselves and push the pace as much as we could.

“The first quarter was a little sloppy, but our defense and goalie were sharp and carried us until the offense started to click,” he added.

Junior Luke Hartman scored a pair of goals. He opened the scoring in each half, giving the Marines a 1-0 lead 1:52 into the game and then made it 5-1 2:40 into the second half. Seniors Joe Cieleski and Owen Stark also scored for Long Beach, which will face top-seed and defending county champion Garden City in the semifinals this Friday at Adelphi at 2 or 4 p.m.

“One of the best things about our team is we have so many different guys who can score,” Pearl said. “We don’t have one major scorer. We have a bunch. The guys have done a nice job all season sharing the ball and making good decisions.”

After Roslyn’s Alex Gatto made it 1-1 at the 7:41 mark, Miller scored his first of three goals as Long Beach regained the lead for good with 86 seconds remaining in the opening quarter. Miller found a loose ball off a scramble and took whacks from the sticks of Roslyn defenders Zach Harris and Charlie Sampter on his way to the front of the cage where he fired a shot over the shoulder of goalie Jacob Goldberg.

Like Carroll, Goldberg made 11 stops. Many of Carroll’s, however, came at key moments. Of Carroll’s seven saves in the first half, three were on the doorstep and protected a 3-1 lead.

“Wally’s been great for us for two years and he’s taken his game up a notch in the past few weeks,” Pearl said. “He’s in a zone. He’s seeing the ball well and making big stop after big stop.”

The defense in front of Carroll was equally up to the task. Jack Skarren, Hayden Sofield and Tom Cieleski were in lockdown mode all afternoon and forced numerous turnovers. On the penalty kill, they got plenty of assistance from Jaden Bloom and Christian Tarsia.

“We’ve been playing together for a long time, probably since we were in first grade, and have great chemistry,” Skarren, a junior, said of the defensive core. “I had confidence we’d play a strong game.”