‘This is the way it’s supposed to be’ 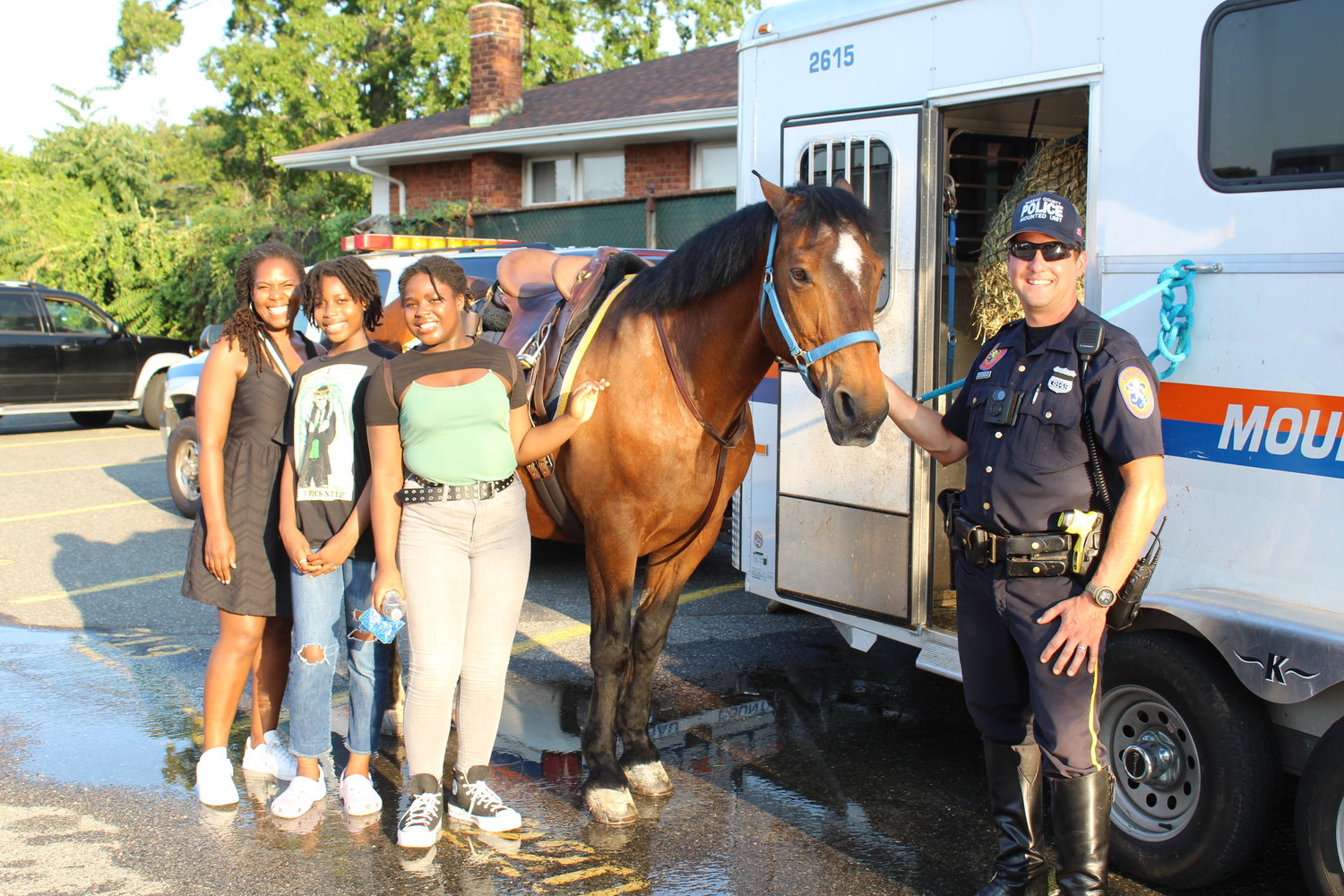 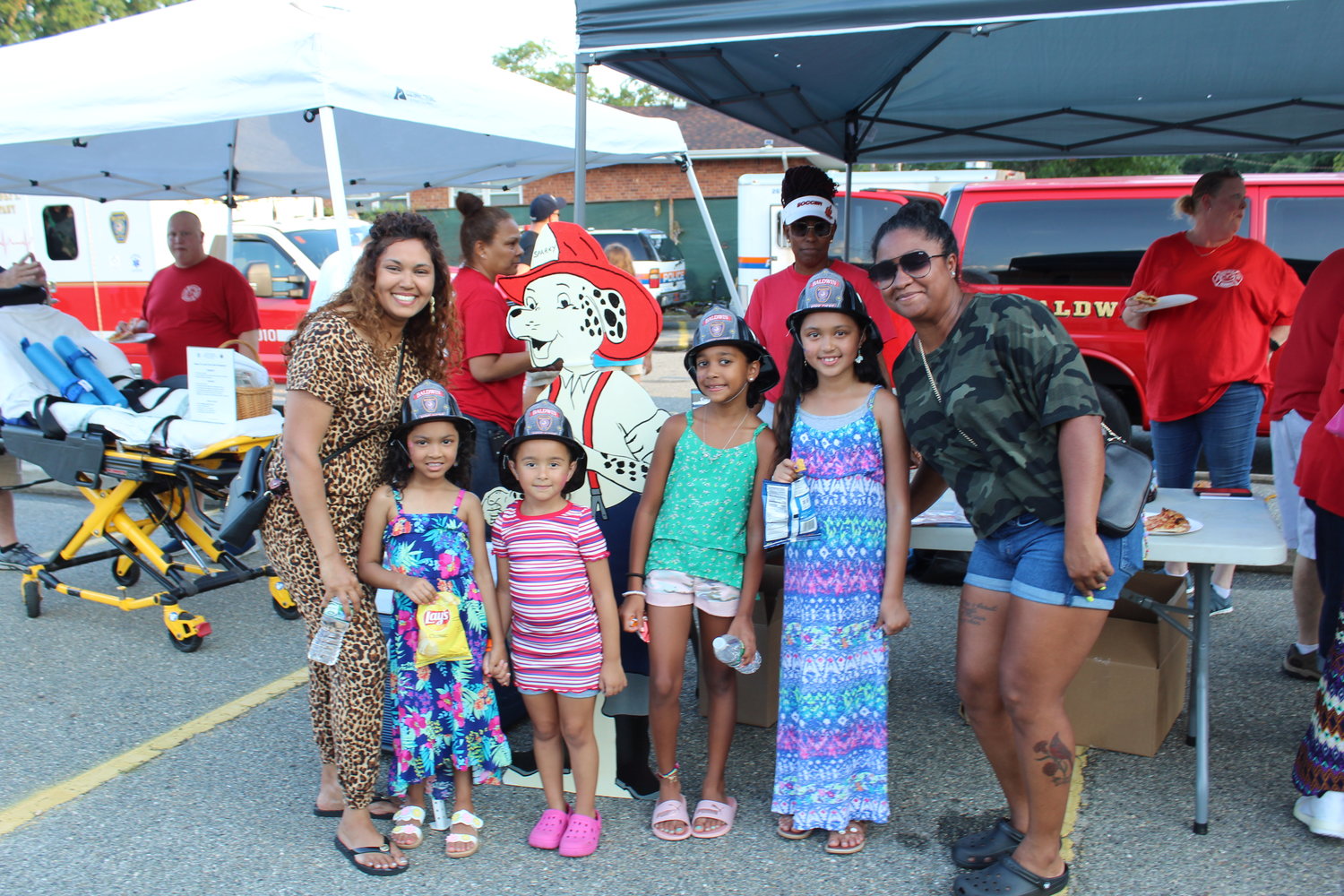 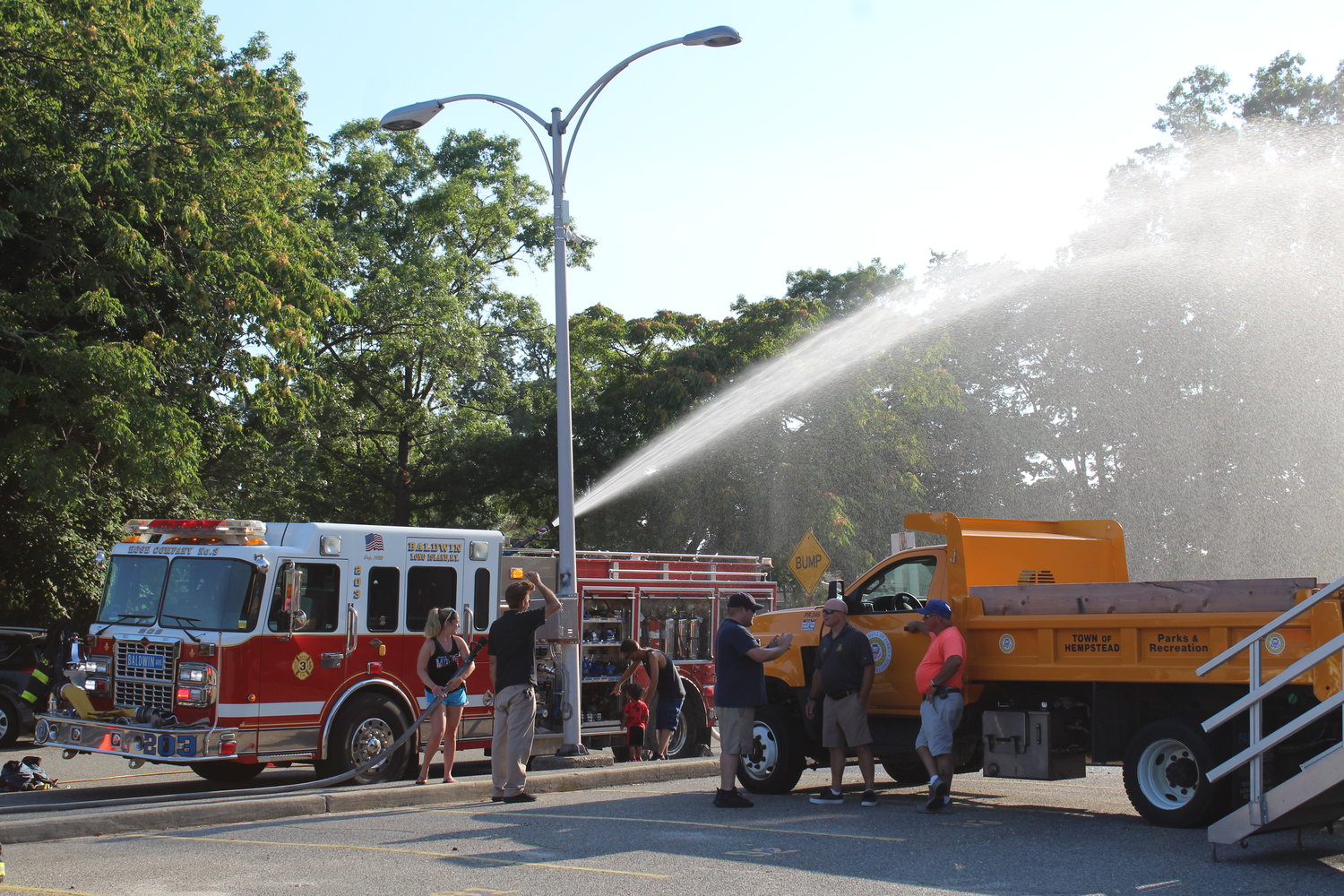 The Baldwin Fire Department cooled down National Night Out-goers while teaching them about the mechanics of operating a fire truck and offering passersby the opportunity to try out the hose.
Karina Kovac/ Herald 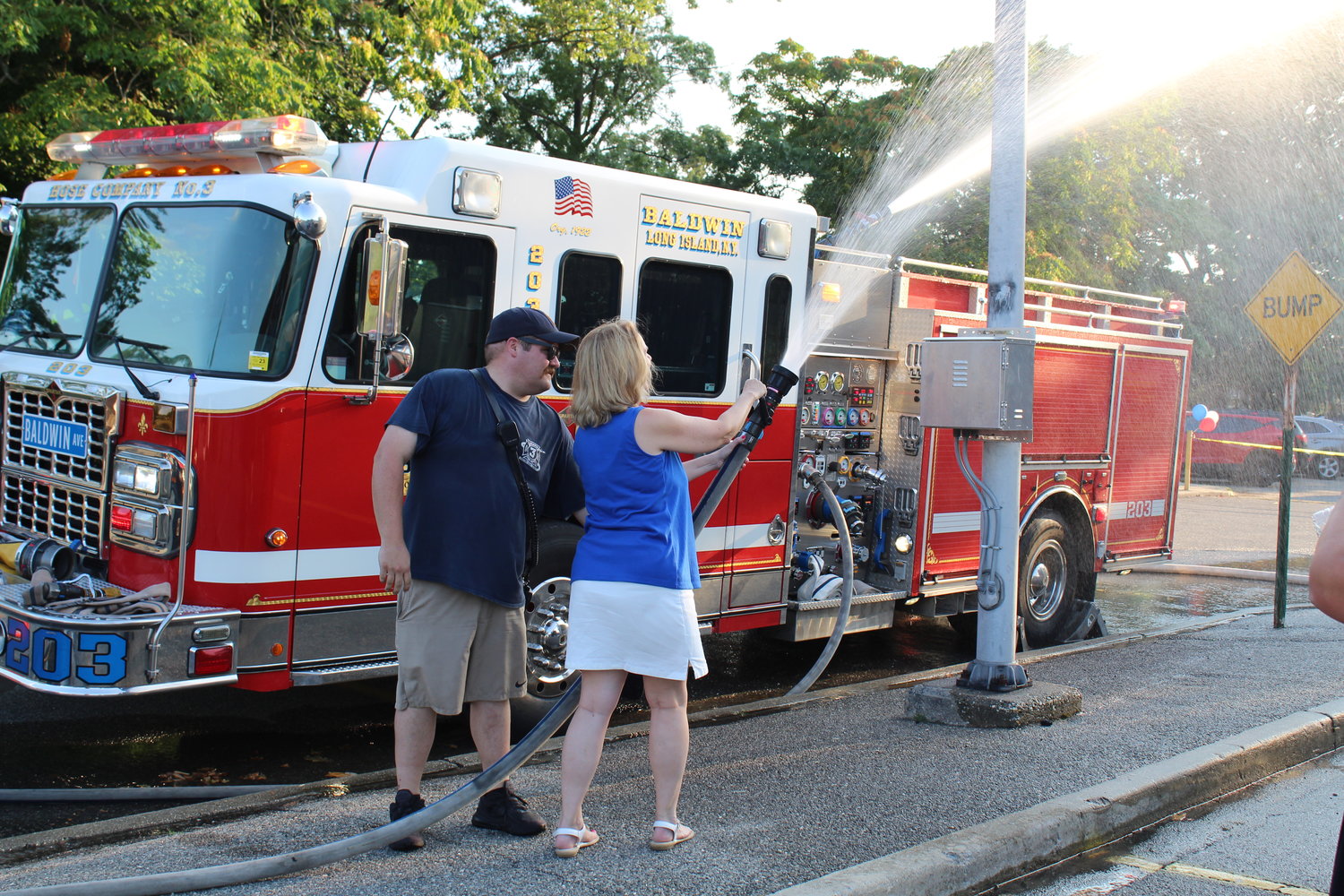 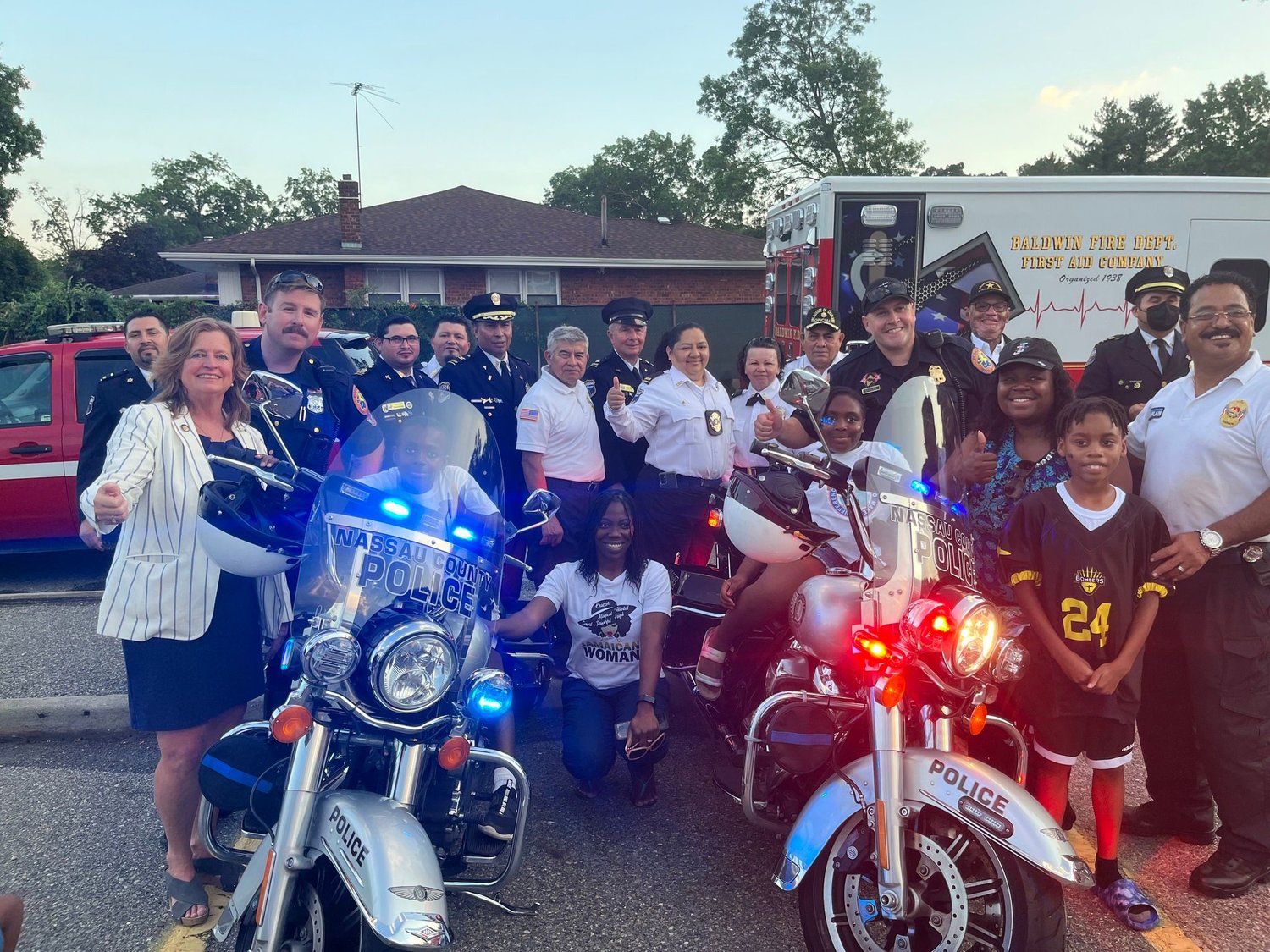 National Night Out, an annual community-building event involving first responders, police officers and the communities they serve, took place at Baldwin High School Aug. 2. It was co-hosted by Assemblywoman Judy Griffin and County Legislator Debra Mulé, and the Baldwin Fire Department and Fire Aid Department, the Nassau County Police Department and other organizations showed people in Baldwin just how many local resources are available to them.

The aim of National Night Out, which is in its 38th year nationally and its second in Baldwin, is to heighten crime and drug prevention awareness, generate support for, and participation in, local anti-crime programs, strengthen neighborhood spirit and police-community partnerships and send a message to criminals that neighborhoods are organized and fighting back.

“We’re here to show the community what the Fire Department does,” said MaryJo Stuparich, 37, lieutenant at Hose Company One, and in the process, she added, hopefully attracting some new members.

Stuparich, who joined the department 18 years ago, said she hoped that 12- to 18-year-olds would try being junior firefighters, and if they took a liking to it, would join full-time after they graduated from high school. Those of all ages were invited to try on firefighting gear, operate a hose and learn about safety. For Stuparich, it all boils down to “being able to help the community.”

Another organization that was happy to take part was the Nassau County Police Benevolent Association, a labor union that supports police officers in everything from contract negotiations to improving their work environment. Trustee Jarred Barretti helped out at the event by handing out pizza and water to hungry and thirsty Baldwinites.

Shamaine Francis, a resident for the past year, came with her two daughters, Tessa and Stella, after seeing a post about the event on Facebook. It was almost like a “welcome to the neighborhood” event,  Francis said, adding that she was excited to find out about the local resources that are available. “It’s awesome to connect with people that work where we live,” she said.

Glad to get off the streets for a while at a friendly event, officers clearly enjoyed seeing the community they protect and serve. “We love doing this,” Barretti said. “We love getting involved. Any community activities, we’re always there. We do plenty of things through the year, whether it be backpack giveaways or picnics. All through the county, we’re always there We’re out here interacting with the community, interacting with kids to build a relationship between the youth of the neighborhood and the Police Department.”

One young person who is bridging law enforcement officers and teenagers is Linda Polizzi, who has been in the Explorers program, for civilian volunteers, for two years, but is still considering what to do when, she said, she grows up. The biggest takeaway so far for Polizzi is simply, “just listen” to those you’re responding to. During the simulated training and scenarios, they take part in at the Nassau County Police Academy, she said, “If you mess up and say something wrong, it can affect pretty much everything.”

While the drills help teach teens the ways of law enforcement, they can also be applied to everyday life, Polizzi said. “Consider this program, because even if you’re not going to pursue law enforcement you learn a lot of stuff that can save your life.”

Carl DeHaney, of Sanitation District No. 2 was giving out miniature recycling-bin piggy banks and coloring books to children. “My dad always said, you can tell how important something is when you take it away,” DeHaney said, illustrating the importance of the Sanitation Department. “If we weren’t collecting, can you even imagine what it would be like?”

Assemblywoman Griffin thanked all the organizations that took part in the event. “National Night Out is a wonderful night across the country,” she said, “where we take time out to recognize all that our law enforcement, first responders, fire departments do for us and how they support the community by doing outreach and bringing communities together to keep us safe and protect us.”

Legislator Mulé also offered her thanks to the organizations, and to staffers in the two offices, who helped organize the event after it was moved from Baldwin Park to the high school. Responding to community suggestions that it be more centrally located, they worked with faculty at the high school to prepare a spot in the parking lot, which attracted hundreds of people throughout the day.

“This is the way it should be,” Inspector Joseph Guerra, of the NCPD’s 1st Precinct, told the crowd. In Nassau County, the safest county in America two years in a row, Guerra said, “we have the right combination, the right tonic, the right something, the right magic,” which wouldn’t be possible without the teamwork of “our legislators, our Police Department, our community, our Fire Department, all of you that are here. This is the way it’s supposed to be — all of us working together.”