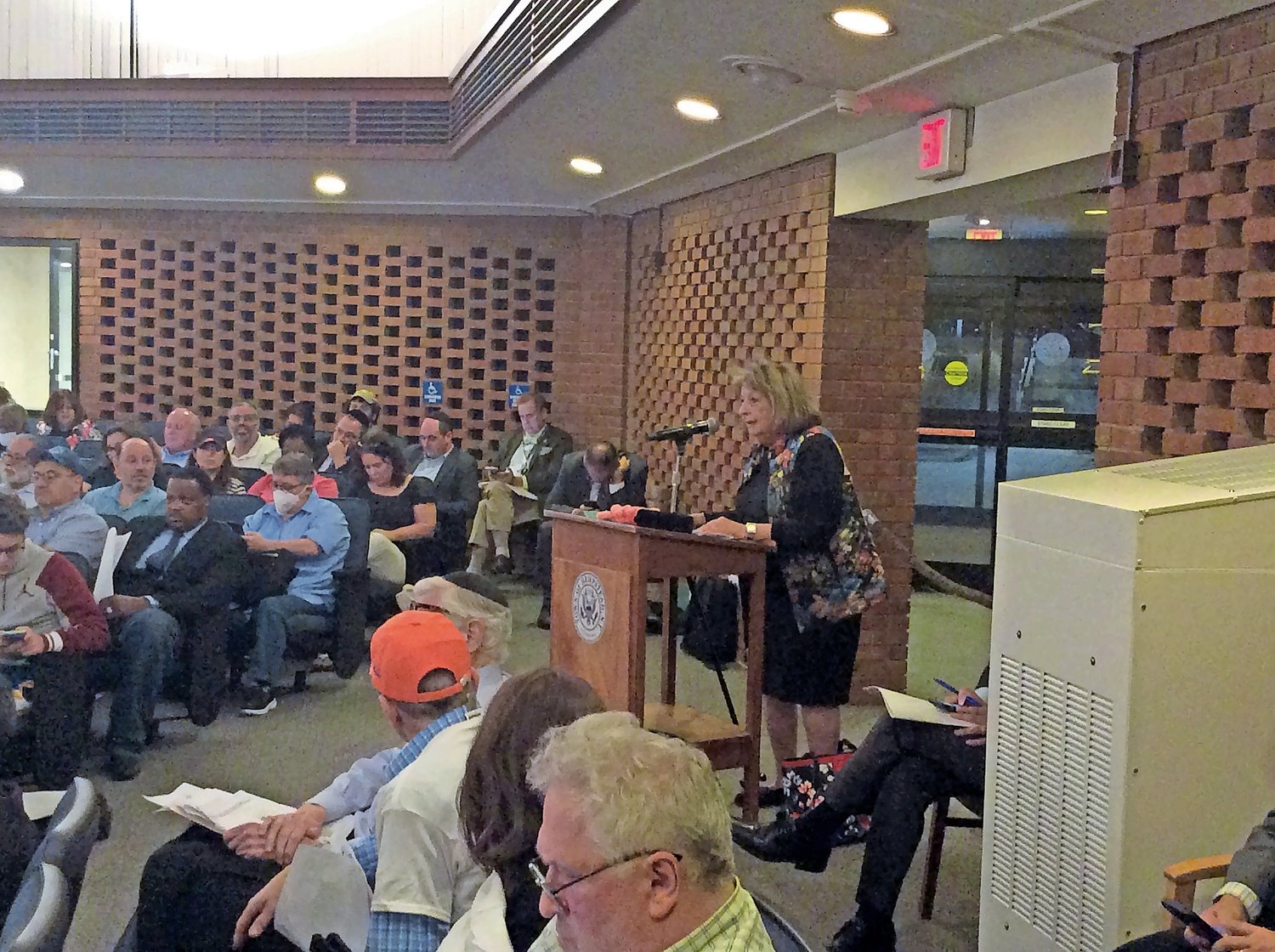 Rochelle Stern Kevelson was among the many Five Towns residents who spoke out in opposition to the potential developments.
Kepherd Daniel/Herald
By Kepherd Daniel

The Hempstead Town Board voted unanimously last week to approve a six-month moratorium to halt building in what is known as the Business Overlay and Transit Oriented Development district in Inwood and North Lawrence.

The Sept. 20 vote was welcomed by more than 100 Five Towns residents who attended the meeting, and called on the town to help remedy a situation in which they said they felt under siege by too many proposed development projects.

A community meeting last month galvanized resident opposition to what they described as overdevelopment in Cedarhurst, Hewlett, Inwood, Lawrence and Woodmere.

“There are obviously many building projects being planned all over the Five Towns,” said Rena Saffra, a member of the Five Towns Civic Association. “Each one, on its own, may not sound so bad, but the totality of them all is something that must be taken into consideration before we get the green light.”

The proposed developments include one at the 110-acre Woodmere Club; a three-story Amazon warehouse on the Nassau-Queens border; 17 approved single-family homes on property formerly owned by the Lawrence Woodmere Academy; 212 rental units and 427 parking spaces planned for 25 Wanser Ave. and 40 Bayview Ave. in Inwood (whose application hearing was the same day as the moratorium vote); nearly 20 acres of transit-oriented development in Inwood and North Lawrence; and the approved Pearsall Project, which will bring three four-story buildings with a total of 112 apartments to Cedarhurst; and Far Rockaway’s Rockaway Village Apartments, which, when finished, will comprise eight buildings and 1,693 residential units.

Many maintain that the current infrastructure is not adequate for all of the proposed projects, and that development should be put on hold until roads, evacuation plans and the area’s capacity for storm water absorption and dispersal have been updated or improved.

Regarding the potential development of the Woodmere Club, Saffra said, “We hear that there’s possible consideration to building 80 homes on the entirety of the property, and this is unacceptable.”

In May 2021, developers proposed a plan to build age-restricted condominiums on 20 percent of the club property and to turn the remaining 80 acres into a nature preserve under the stewardship of the North Shore Land Alliance, which supported the project.

“The message to me is loud and clear,” Jennifer Wallace, of Lawrence, said of the reaction to all the planned development. “Residents and constituents want to put an end to the overdevelopment and to the destruction of our beautiful suburban community. The moratorium is a great idea, but it should be permanent, not temporary. If we can’t have adequate infrastructure for what we have today, how in good conscience can you consider adding any more?”

Lawrence resident Howard Shapiro recalled a 2018 incident involving his son that, he said, showed just how perilous traffic conditions are.

“Four years ago, the traffic going off Rockaway Boulevard was jammed all the way down the roadway,” Shapiro recounted, “and somebody decided he would drive on the sidewalk to get around it, and going onto Broadway, he hit my son. That's what the tragic situation is like in the Five Towns right now.”

Shapiro said that his son is OK now, but he stressed that more development increases traffic volume, and with it potentially more hazardous situations for pedestrians, bicyclists and motorists.

The town issued a statement that the moratorium would be revisited in six months after discussions with the surrounding communities. Officials are considering the possibility of making the moratorium permanent.

Have an opinion on proposed development in the Five Towns and/or the building ban? Send a letter to jbessen@liherald.com.