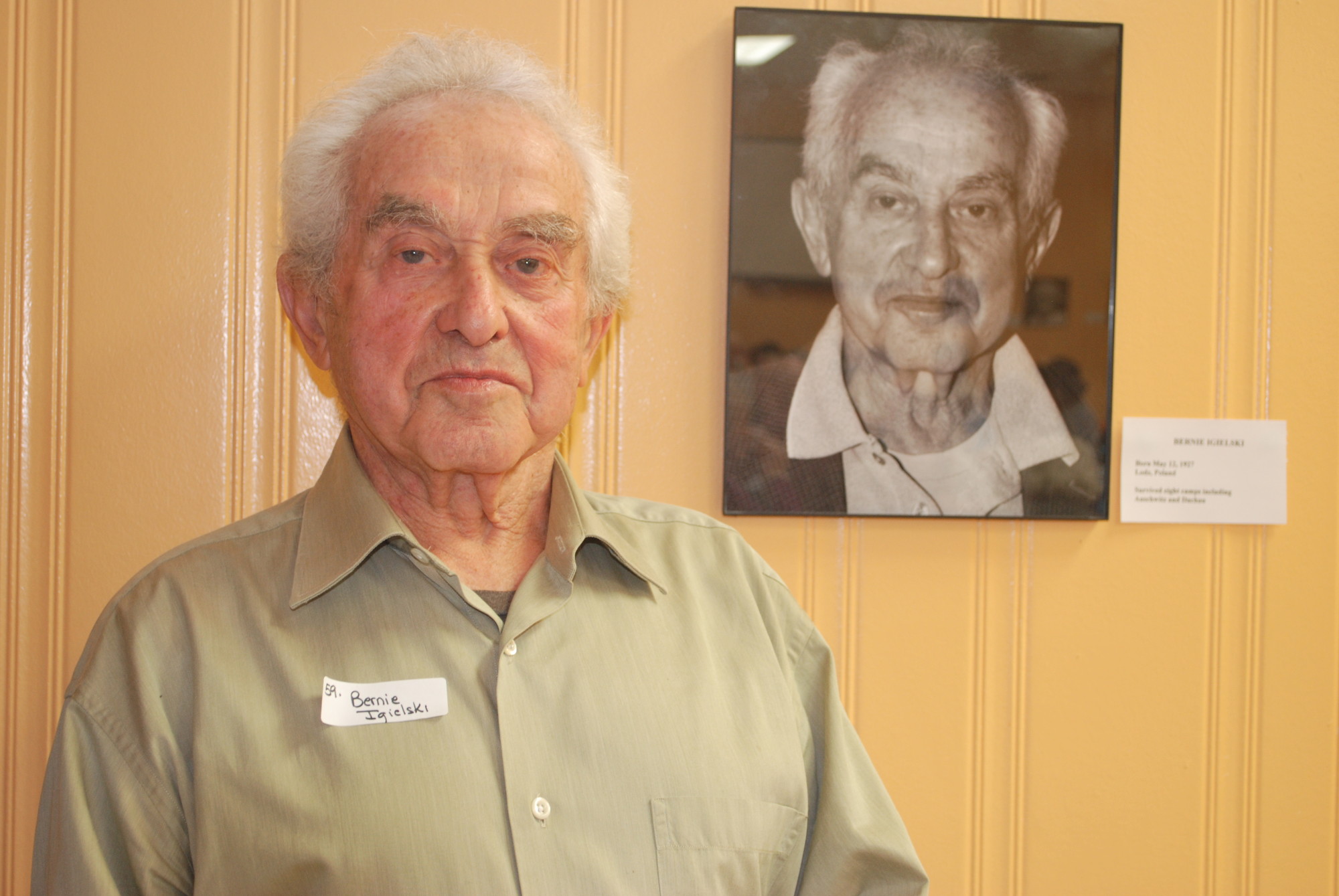 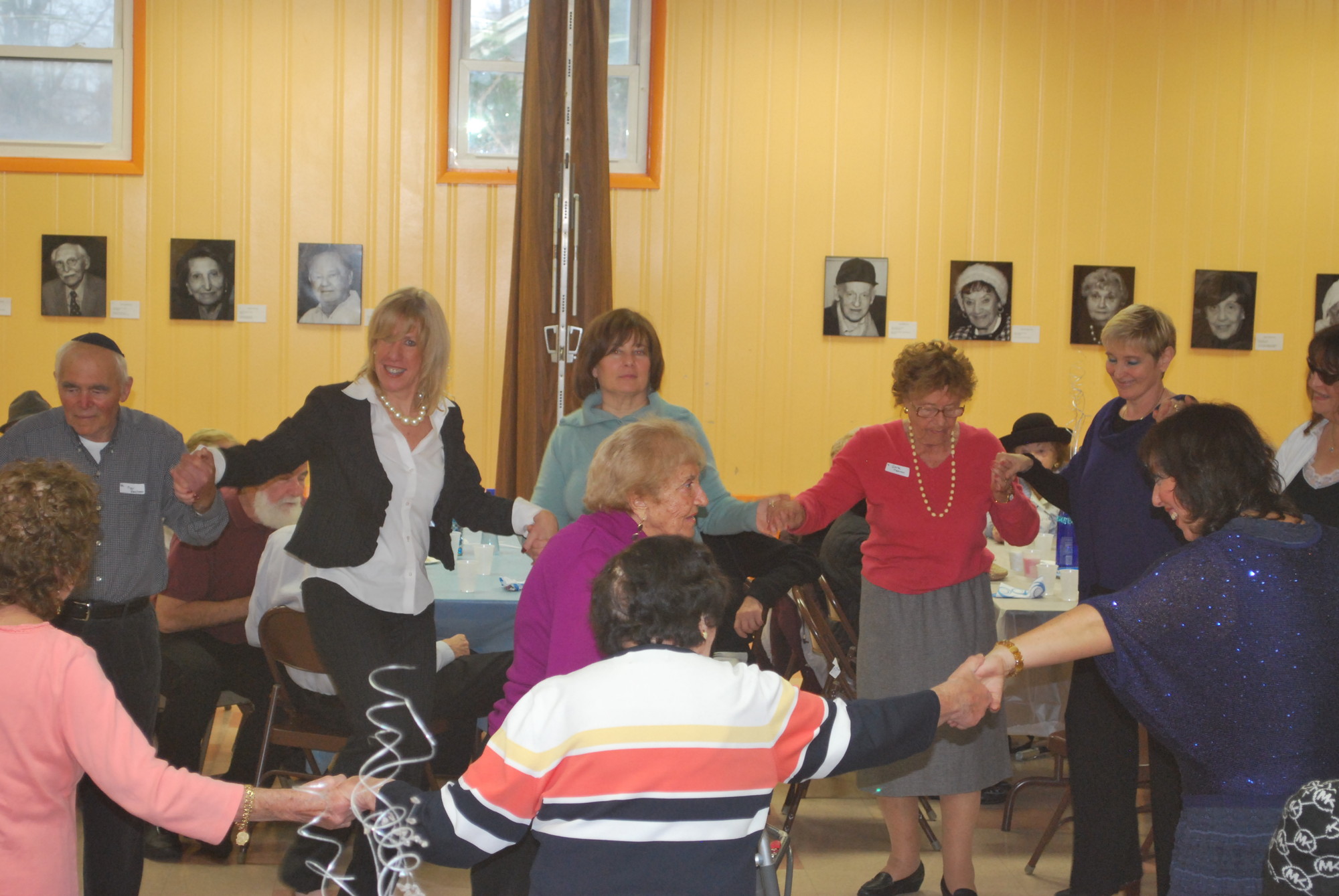 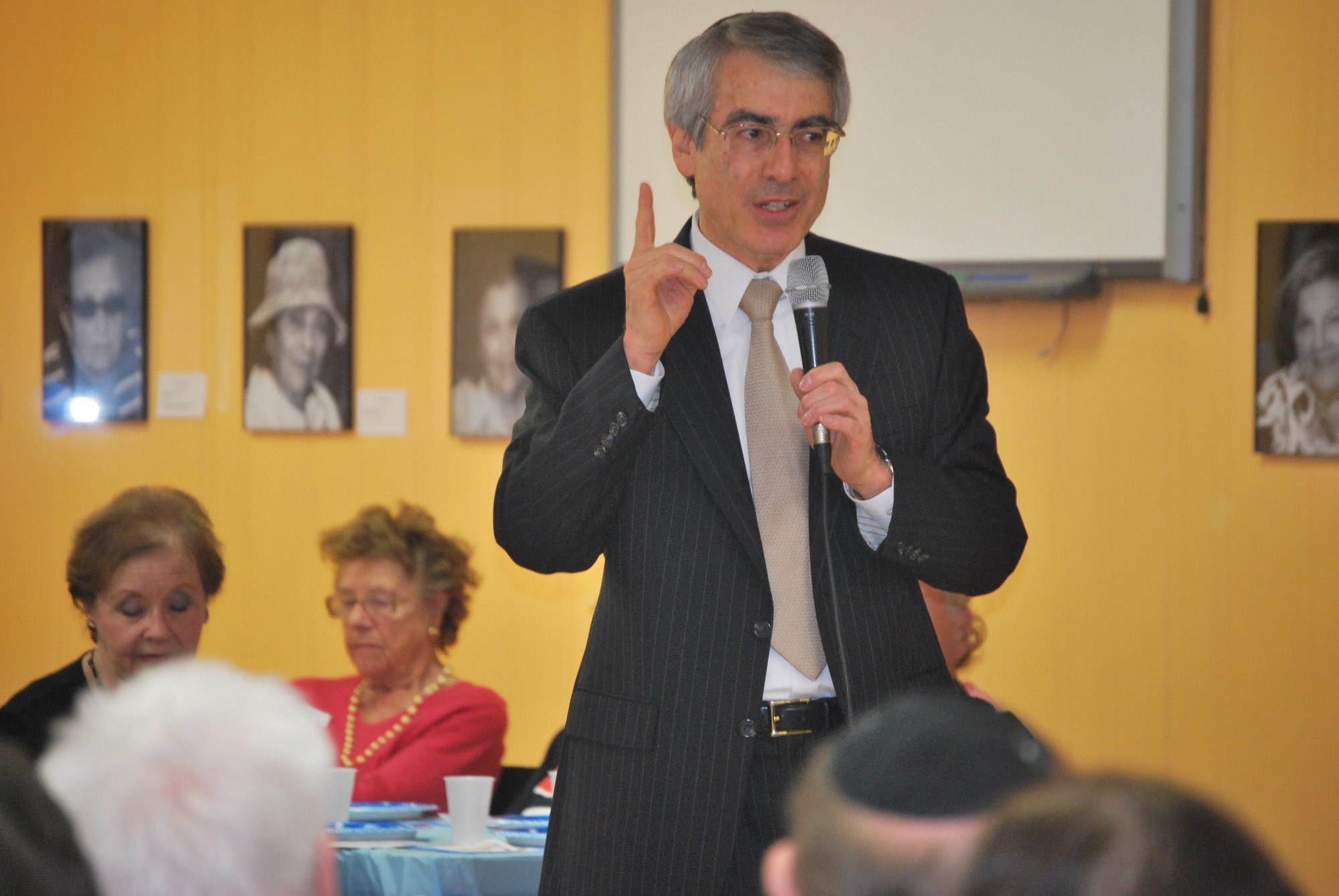 Rabbi Bruce Ginsburg of Congregation Sons of Israel spoke to the Holocaust survivors at the JCC party.
Jeffrey Bessen/Herald
Previous Next
By Jeff Bessen

Having family members murdered in the Holocaust, and his experience with those who lived through it, propelled photographer George Bogart to create an exhibit that honors survivors.

Photographs of men and woman who suffered through multiple concentration camp internments make up Bogart’s “The Miracles of Life” exhibit that made its way to the JCC of the Greater Five Towns last week.

Made over three years during Passover Seders that are held for Holocaust survivors from the Five Towns, Far Rockaway and Long Beach, the images are portraits in black and white that Bogart says convey the essence of who these people are. “I wanted to call it ‘Dreams from Nightmares’ as I feel that although all these people have gone through the most unspeakable horrors, they thrived,” Bogart said. “They raised families and been successful. They are something special and you can see it in their eyes; their love of life. It was my honor to do it.”

Mark Ramer, president of the Jewish Center of Atlantic Beach, organizes the Seders for survivors in honor of his father, Leon Ramer, who posed for one of Bogart’s portraits. With the number of survivors decreasing, Mark Ramer thought the photographs are a great way to document their lives. He invited Bogart to the Seders. “I love the fact they are black and white; there is so much expression,” he said, adding that the exhibit could be brought to schools in the future. “It is a wonderful thing that we have this. It is pretty touching.”

Bernie Igielski, one of the 35 men and women whose photographs were among those on display at the JCC, survived two ghettos and eight concentration camps, but the 86-year-old North Woodmere resident lives his life like he found a four-leaf clover. “I am lucky, every misfortune turned to fortune and I am still here,” he said at the JCC’s Hanukkah party that celebrated the holiday and survivors on Dec. 5.

Igielski, a member of the JCC’s Chaverim group that brings Holocaust survivors together, is originally from Poland. He “recovered,” he said, from his internment in the home of a German family, then came to the U.S. in 1948.

Igielski went to work in the garment industry, but his life was again interrupted as he was drafted during the Korean War. Assigned to Walter Reed Hospital in Washington, D.C., he had easy duty, he said. Among the highlights of his military service: he guarded the Tomb of the Unknown Soldier in Arlington National Cemetery and U.S. Army General Omar Bradley, one of the architects of the D-Day invasion, bought Igielski a cup of coffee.

On a trip to Israel with his brother Henry, Igielski met his wife, Denise. Married for 53 years, the couple have two grown children. “I am having the best time of my life meeting with my fellow survivors,” he said. “They give me the chills. We triumphed, we survived, it fills your life.”

Though not part of the Bogart exhibit, Hewlett resident Marion Blumenthal Lazan’s face is recognizable to many who have heard Lazan speak and have read the book, “The Four Pebbles,” which she wrote in collaboration with author Lila Perl, who died on Dec. 4. It tells the Blumenthal family story of survival from being refugees in Holland to their imprisonment at Westerbrook in Holland and Bergen-Belsen in Germany.

Also a member of the Chaverim group, Lazan said that Bogart’s photos illustrate each subject’s character. “No two stories are alike, but it shows survival and continuity,” she said of the photographs. “Each photo is beautifully done.”

Lazan believes that educating people about the Holocaust, something she has been doing since 1979, needs to be done by the generation who experienced it. “There are many lessons that can be learned from this dark part of our history,” she said. “How to treat, behave and react to one another, this is what we pass along.”

There are plans to exhibit the photos in other places in the Five Towns, but no locations and dates have been decided, JCC officials said.