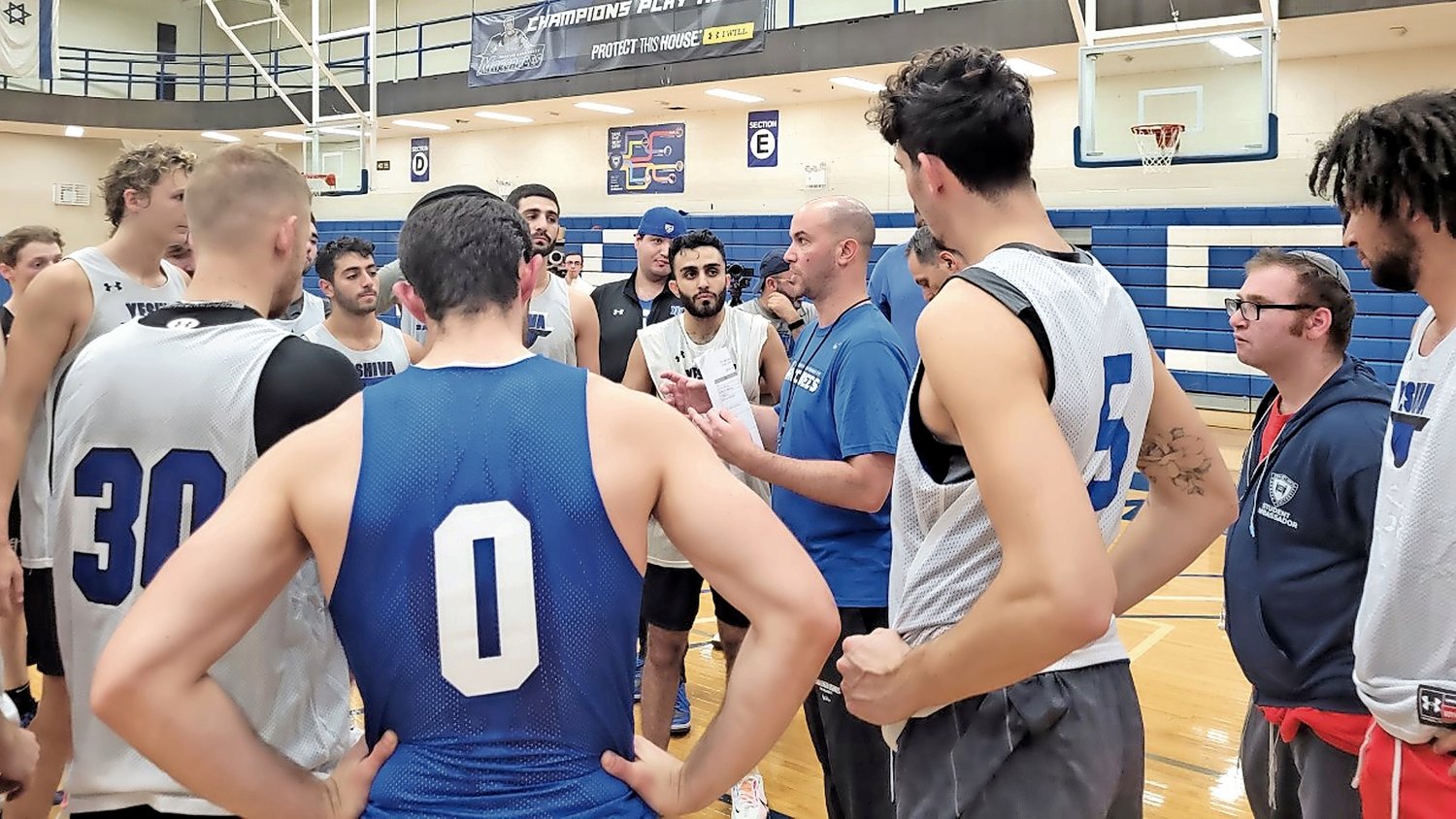 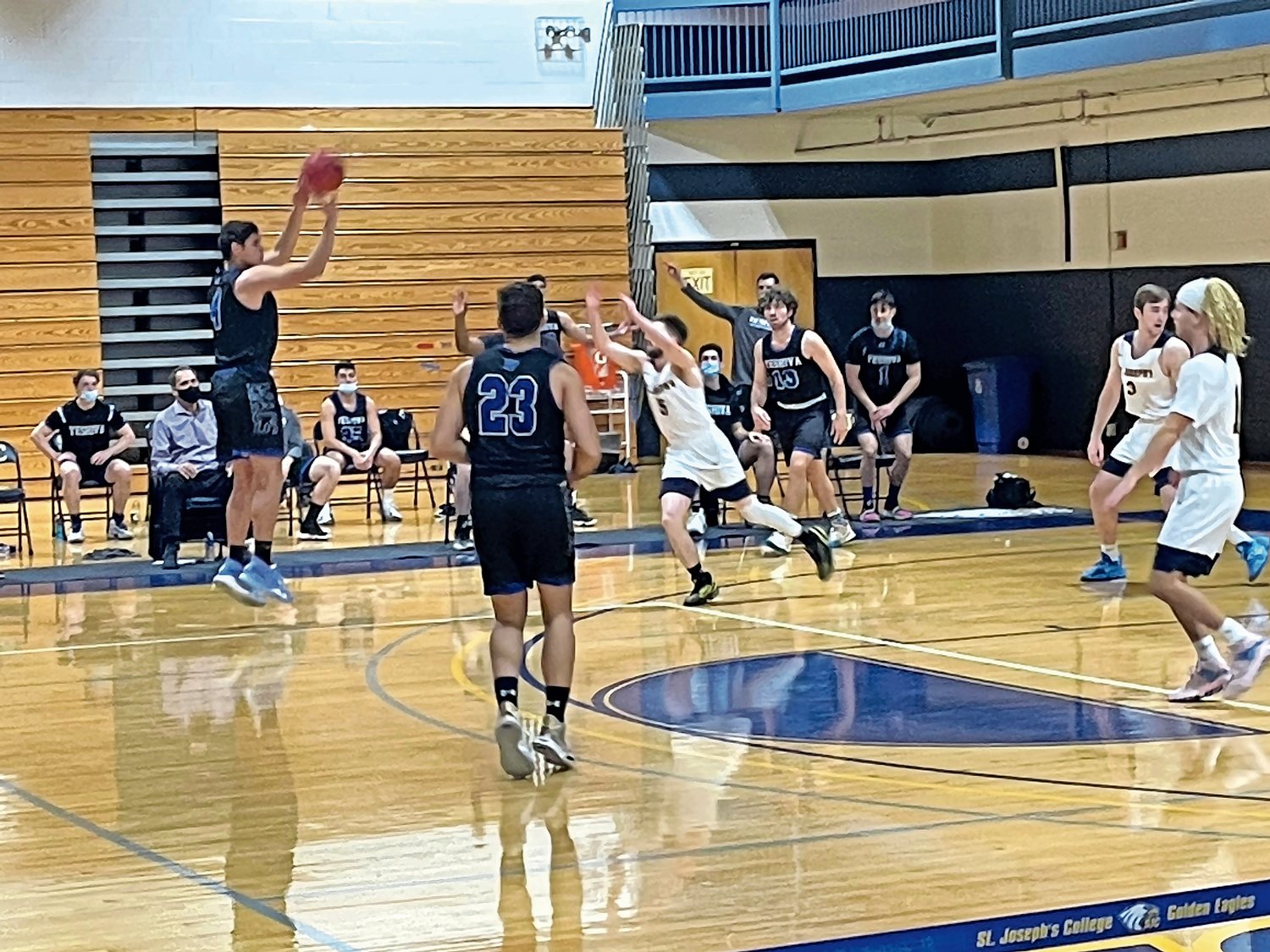 A lifelong Woodmere resident who is the son and grandson of coaches and played basketball at Yeshiva University now leads his alma mater men’s team — a squad with a No. 2 ranking in Division III and a 41-game winning streak — the second-longest in men’s D-3 history.

Elliot Steinmetz, 41, a real estate lawyer with his own firm — Rosenberg & Steinmetz PC — and his Maccabees have become the talk of the sports world, from articles in local newspapers to an ESPN Magazine story to a rundown in the Nov. 10 Axios email sports report, and much chatter on social media.

After losing the first game of the 2019-20 season, Yeshiva went on a tear, winning its next 27 games and two NCAA playoffs games, making it to the D-3 Sweet Sixteen before the coronavirus pandemic shut down sports nationwide.

The Maccabees added seven wins to the streak in an abbreviated 2020 season, with three of 10 scheduled games canceled because of Covid. The team has started this season with four victories, three of them on the road.

Beginning the season with, and continuing, a winning streak might affect most coaches and teams, but Steinmetz appears to take it in stride. “Honestly, I don’t pay attention,” he said. “Funny — I knew we have the streak, but we take it one game at time. We have a maturity, and a lot of our top guys are motivated, and that makes my job a lot easier.”

Mature and motivated players are key to the Maccabees’ success. Interviewed in February 2020, when the streak was about to hit 24 games, Steinmetz talked about “getting the right guys who are willing to put in the work.”

A new take on recruiting
By expanding Yeshiva’s recruiting landscape from local and regional to national and global, Steinmetz and his staff can comb through the basketball world for players who fit into what the Maccabees want to achieve.

“I think it’s not the easiest thing to do,” Steinmetz said of finding the “right guys.” “I watch a lot of film. We watch if they have the talent to win, but I’m watching the little things, how they walk back to the bench and on the bench, to find the winning players.”

Stressing W’s — for wins — over statistics, Steinmetz has reconstructed a men’s basketball program that not only typically lost, but was a doormat for most opponents. That has changed. In 2020, before the world shut down, Y.U. captured its second conference championship in three years.

“He is reaching out to guys that were never thinking of going to Yeshiva University, selling them on the experience,” said star forward Gabriel Leifer, a Lawrence native who graduated from Davis Renov Stahler Yeshiva for Boys in Woodmere.

Leifer, now a graduate student, has seen the program develop since the 2017-18 season. “He does an amazing job on recruiting,” Leifer said of Steinmetz. “He balances the egos, and his best asset is to give up his own coaching system to let us play. We have a lot of freedom and flexibility.”

Skyline Conference opponents obviously have taken notice of the new lion in their basketball den. “Their system is extremely unique — nobody else plays that way,” Mount Saint Mary head coach Ryan Kadlubowski said. “Today it’s all off the dribble. They don’t do that. They pass off the ball. They actually punish you if you play fundamental good defense. This is something no one runs.”

A good start
Steinmetz’s father, Michael, and his paternal grandfather, Sheldon, were both coaches. Elliot played baseball, but basketball grabbed his attention and didn’t let go. His son, Jacob, has the baseball talent: A right-hander who throws in the 90s, he was drafted this year by the Arizona Diamondbacks, becoming the first Orthodox Jew drafted by professional baseball.

Coaching was not on the horizon, either, for Steinmetz. After playing for three seasons for the Maccabees, he graduated from Y.U.’s Sy Syms School of Business in 2002, and went on to earned a law degree at St. John’s.

He enjoyed helping his brother, Sean, at a basketball summer camp in 2003, and got the itch to coach. From 2005 to 2010, he coached the boys’ varsity team at the Hebrew Academy of Nassau County in Uniondale. The Hurricanes had a 104-44 record.

Then, over four seasons at North Shore Hebrew Academy High School in Great Neck, Steinmetz led the Stars to a 66-14 record and their first Metropolitan Yeshiva High School Athletic League championship in 2013, and another appearance in the league finals the following year.

Steinmetz’s resume includes international experience coaching the U.S. 18-and-under boys’ team to gold medals at the Australia International Games in 2010 and 2011 and gold at the 2013 Maccabiah Games in Israel.

Being able to coach at his alma mater appeals to Steinmetz. “It makes it more interesting, the connection,” he said. “I love being a part of the place, for it’s exciting and positive.”

The streak, and the attention
Leifer noted the unofficial motto of the 1995-96 Chicago Bulls, who won an NBA-record 72 games in the regular season, but believed that wouldn’t mean anything unless they won the NBA championship, which they did. “Like the Bulls said, ‘It means nothing without the ring,”’ Leifer said. “Streak or no streak, if the Yeshiva University Maccabees aren’t battling for the Skyline Conference championship [and] going to the NCAA tournament, then all the statistics are meaningless.”

Kadlubowski said he welcomes the attention Y.U. is attracting, saying that the talent level in D3 basketball is better than many think. He pointed to Salisbury State upending Division 1 Delaware State on Nov. 12.

The streak was tested in the first half of last Sunday’s game at St. Joseph’s College in Patchogue. Yeshiva didn’t shoot well, and the Golden Eagles kept it close, and even took a 3-point lead halfway through the first 20 minutes. It was 39-33 Y.U. at the half. Then the Maccabees exploded for the first 19 points of the second half to take a 58-33 lead.

“It’s definitely easier with guys who are self-motivated and here for a reason,” Steinmetz had said two days before Sunday’s 82-58 victory. “It’s good that every so often they’re reminded what losing feels like. We do certain things like run to have a winner and loser to create that feeling of staying hungry. People don’t realize that winning a college basketball game is very hard, and having some success takes work.”