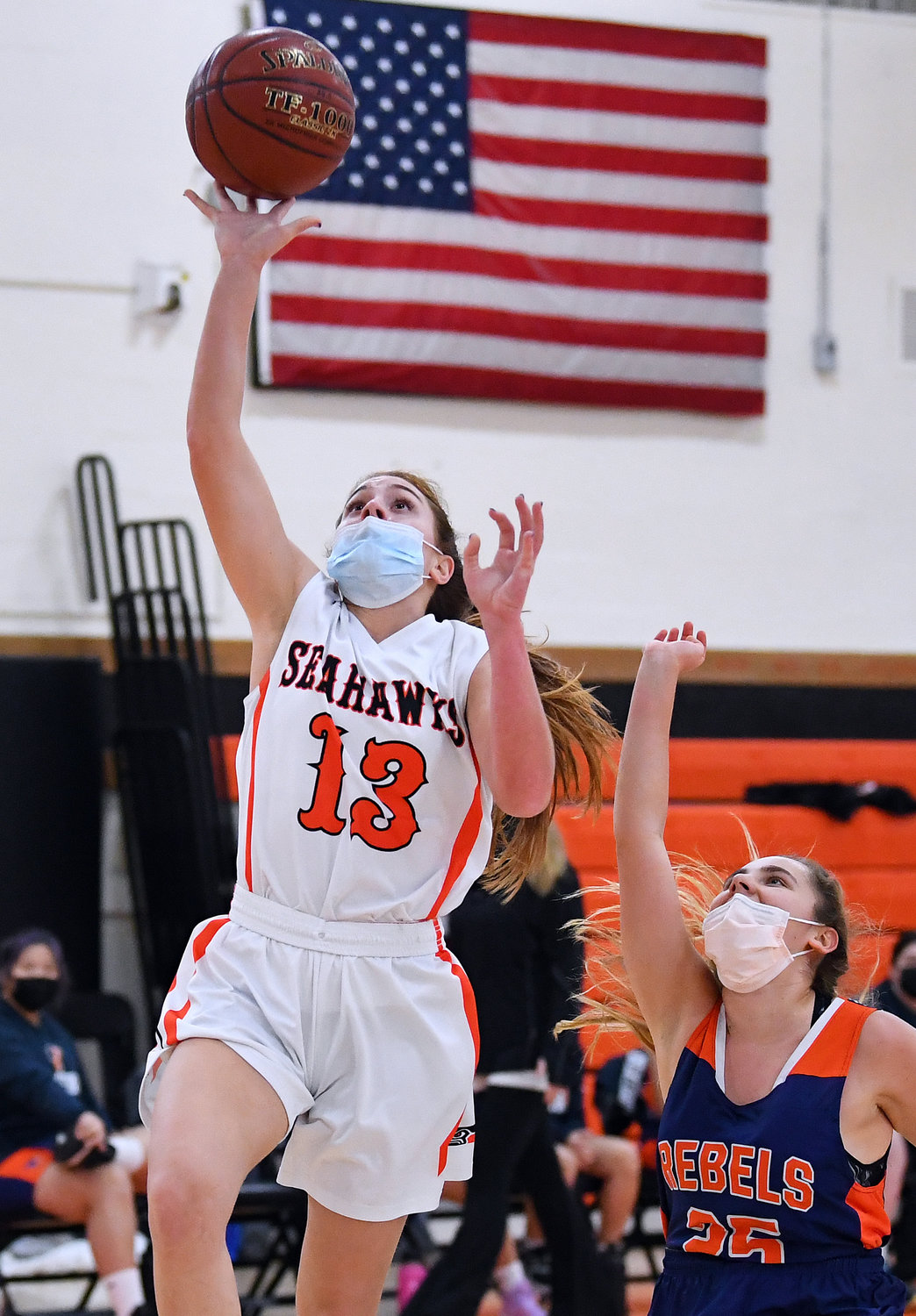 Caylee DeMeo is the offensive catalyst for Carey, which hosted a holiday tournament last week to prepare for the conference grind.
Neil Miller/Herald
By Jamie deJong

Hempstead. Considering the external circumstances affecting the roster at the moment, head coach Anthony Turco recognized the defeat may simply be a byproduct of the fickle situations surrounding the team.
“We have six varsity players out with COVID, so we had three JV players up for this one,” Turco said. “We’re just struggling just like everyone else. You watch SportsCenter and every single main league is dealing with it right now. The goal is to give them as much normalcy as possible.”
Seniors Caylee DeMeo and Rose Castronovo led Carey’s scoring. DeMeo was the leading scorer with 15 points, as it was clearly her prerogative to break down the zone defense and get to the rim. She also had a handful of plays where she acted as a solo fast break, as she got the board and took it coast to coast, finishing with either hand. Castronovo made plenty of hustle plays, as a good amount of her 10 points came from put backs on the offensive glass and sharp cuts to the hoop. Turco was very content with the effort his two captains displayed.
“Caylee and Rose are my two captains and no matter what the score is and what the situation those two are going to give 100 percent,” Turco said. “That’s going to roll over into their life and they are going to be better people because of it.
A key injury for the Seahawks also hindered their chances of winning, sophomore Valentina Falagna went down with a knee injury late in the second quarter. The team was winning when she departed, and her aggressiveness on the boards and defensive presence as an interior big was missed in the second half. Junior Kate Marcino also played key minutes and hit a handful of threes.


Part of the issue was the team’s inability to break the full-court press that West Hempstead was utilizing, as even when the Seahawks were able to get past the initial defender, often an errant pass resulted in a turnover.
For the Seahawks, it will be an uphill battle in securing a playoff spot. The team is currently 2-6 overall and 1-3 in conference play with a challenging schedule to navigate. There is still ample time, as the majority of the conference schedule is still yet to be played but considering the sheer number of players the team has in the COVID protocol, it will not come easily. Having a 20-point per game scorer in DeMeo and a full team of girls who give nonstop effort makes it plausible.
Carey’s wins have come against Valley Stream North and Valley Stream South. DeMeo poured in 25 points in each of the victories. Freshman Leila Paz chipped in 10 points against South.
The Seahawks are back home Jan. 11 to host Roslyn at 5 p.m.