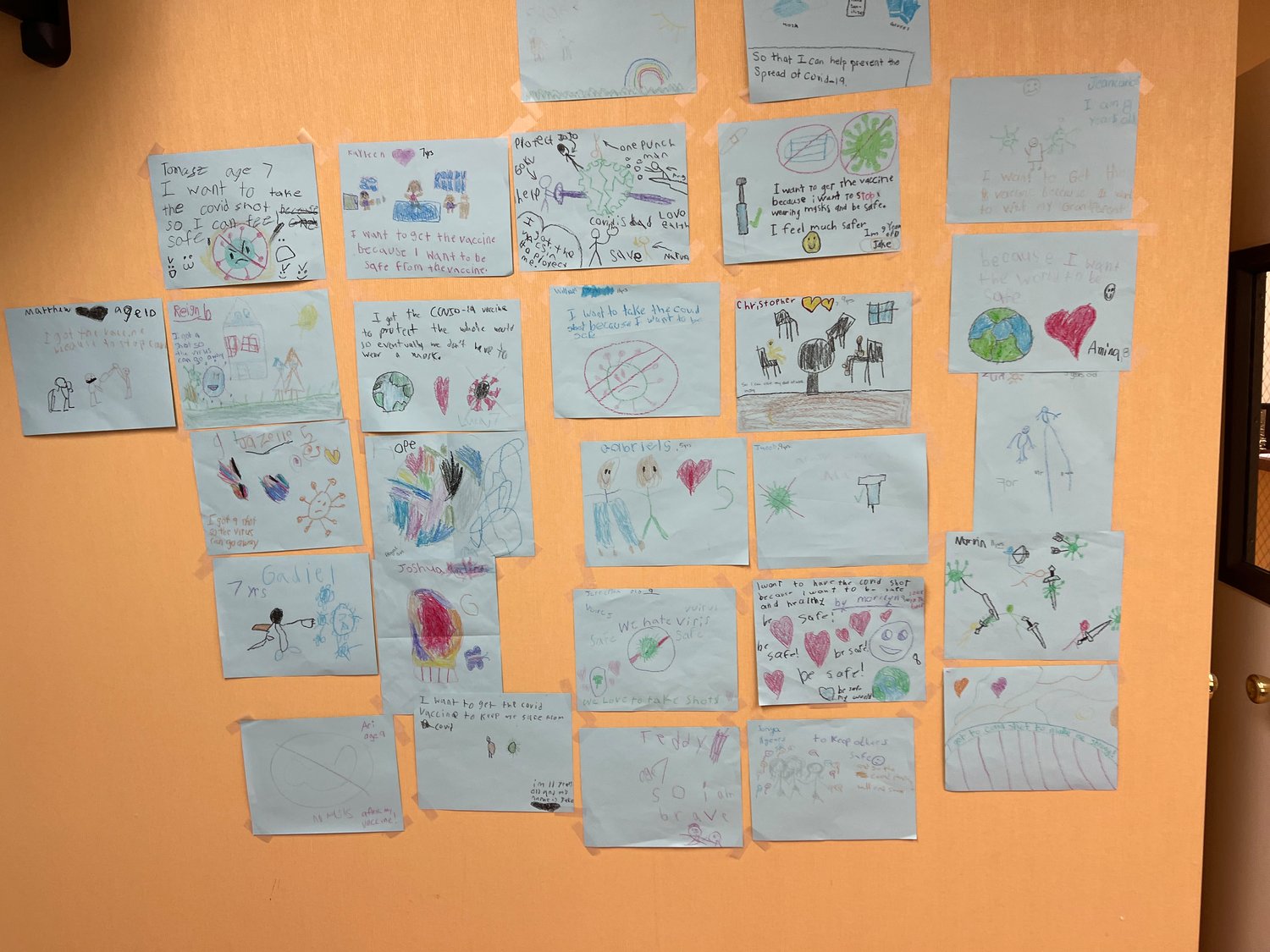 Since the Centers for Disease Control and Prevention signed off on the Pfizer-BioNTech’s child-size coronavirus vaccine — a low dose intended for children ages 5 to 11 — in early November, Cedarhurst pediatrician Dr. Mitchell Weiler has been administering the inoculations, vaccines, and then asking his young patients to express their feelings about the shots by making drawings and writing about them.

The New York State Department of Health has long suggested that those who get the vaccination remain at the site for at least 15 minutes so they can be monitored for any adverse reactions.

“I was thinking, what are we going to do with this room full of kids in the waiting area?” recalled Weiler, who has spent the past 17 years of his 40-year career at a practice on Carman Avenue in Cedarhurst, after a decade in Woodmere.

To occupy the children during the post-vaccination waiting period, Weiler began to give them a prompt, which can be found written on blue paper and taped to a wall in the reception area. It reads, “Please draw a picture and tell us why you want a Covid Vaccine.”

Kids have mixed feelings before getting the shot, Weiler said. “Some are [scared], and some are very happy to get it,” he said, adding, “Most of them conceptualize that they’re trying to protect themselves against Covid,” while others “are just kids that don’t want to be vaccinated, so they’re upset. It’s a wide spectrum.”


Weiler thought it would be interesting to see what they were thinking by offering them crayons and paper afterward. “It really gives the kids a chance to express themselves,” he said, and their parents “are also pretty interested to see what the kids have to say, and they’re happy to keep the child occupied during the waiting period.”

As kids are drawing, “They’re really calm,” Evelyn Canarte, one of Weiler’s medical assistants, said, “and I see that they have [had] a lot of encouragement from their parents to get the shot.”

Every time Canarte brings a child back to the waiting room after their vaccination, they express to her that “they feel confident,” that they have done something good for themselves and others, she said.

The pandemic was traumatic for a lot of children, Weiler said, so the availability of the inoculations for this population makes many kids enthusiastic about getting through the pandemic.

“It gives the kids a lot of hope and faith that the mask phase of Covid and the pandemic will be over soon,” Tiffany Norwood, another medical assistant, said. “A lot of them are doing it because they want to be closer with their family members.”

In the last couple of weeks, Weiler has hung nearly 30 post-vaccine drawings on the waiting room walls, and is considering putting them together in a book.