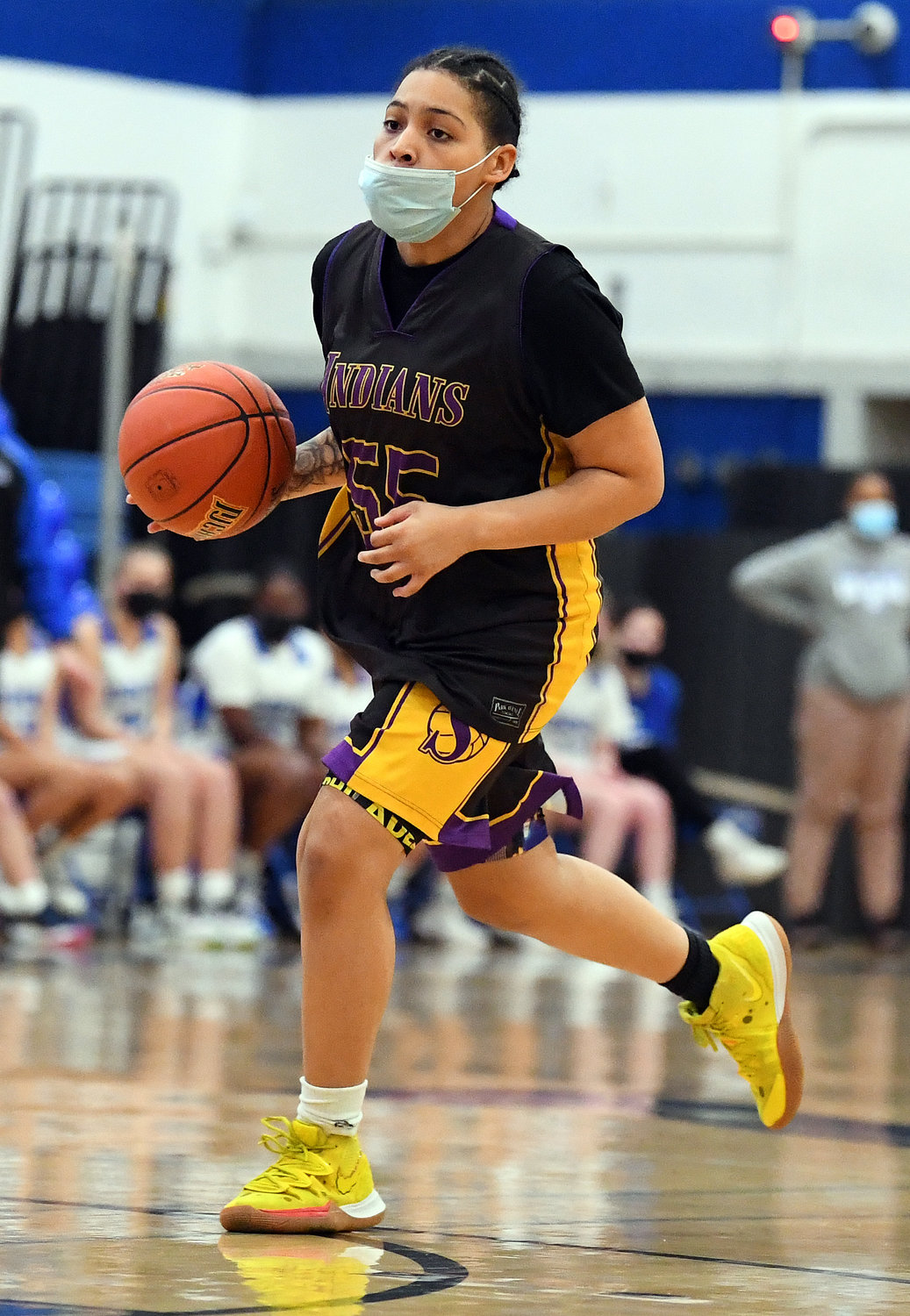 Calhoun scored 18 straight points spanning the first and second quarters Jan. 11 to break an early stalemate and went on to defeat visiting Sewanhaka, 50-28, in a Nassau Conference A-II girls’ basketball matchup.
Junior Mia Licari (15) and seniors Gabby Hannelin (12) and Holly DiPalo (10) all scored in double figures as the Colts (6-4 overall; 4-1 in A-II) rolled on Senior Night for their fourth straight victory. Seniors Charnelle Miller and Laura Marcia-Bodden led the Indians (1-7; 1-4) with 12 and 8 points, respectively.
“We move the ball really well and it’s something we practice a lot,” Calhoun head coach Dan Catapano said. “The girls are looking for one another and trying to advance the ball as quick as they can. The core of the team has been around for two years and it’s an unselfish group.”
Some tenacious defense kept Sewanhaka close early and the game was knotted 6-6 with 1:30 remaining in the opening quarter before Calhoun caught fire and went on a momentum-turning run. Licari had seven points as the Colts scored the first 15 of the second quarter after closing the first with a DiPalo buzzer beater and the lead quickly swelled to 24-6.
Miller scored the final eight points of the half, including a long three-pointer at the horn, and the Indians cut the margin to 10 heading into the third quarter but would get no closer than nine.


“We’re a pretty young team with two sophomores and a freshman starting, so there are growing pains involved,” Sewanhaka head coach Alex Soupios said. “I thought we did a nice job in the first quarter and our defense kept us in it for a while. But Calhoun is pretty polished and definitely one of the more talented teams in the conference.”
Sewanhaka’s lone win over its first eight came against neighboring Carey on Jan. 5. Marcia-Bodden led three Indians in double figures, pouring in a game-high 19 points in a 52-44 home victory. Freshman Thalia Fowler had 14 points with all but two of those coming from behind the arc. Miller added 13 and junior Jada Brown had 4.
“We had a great defensive effort against Carey and hit eight three-pointers,” Soupios explained. “To hold Caylee DeMeo to 12 points is probably the best anyone can hope to do. With a young team like ours, it’s just a matter of becoming more consistent.”
Sewanhaka also played Roslyn tough in a 50-42 road defeat early in the campaign. The Indians trailed by 11 at halftime, but cut the deficit to one heading into the fourth quarter before the Bulldogs re-rallied. Miller had 15 points, and Brown and sophomore Jadin Rolling added 7 apiece. The teams meet again Jan. 19 at 5 p.m.
“We’re making some mistakes that are turning into baskets for opponents, and we’re still learning the importance of valuing every possession,” Soupios said. “I just want to see steady growth.”