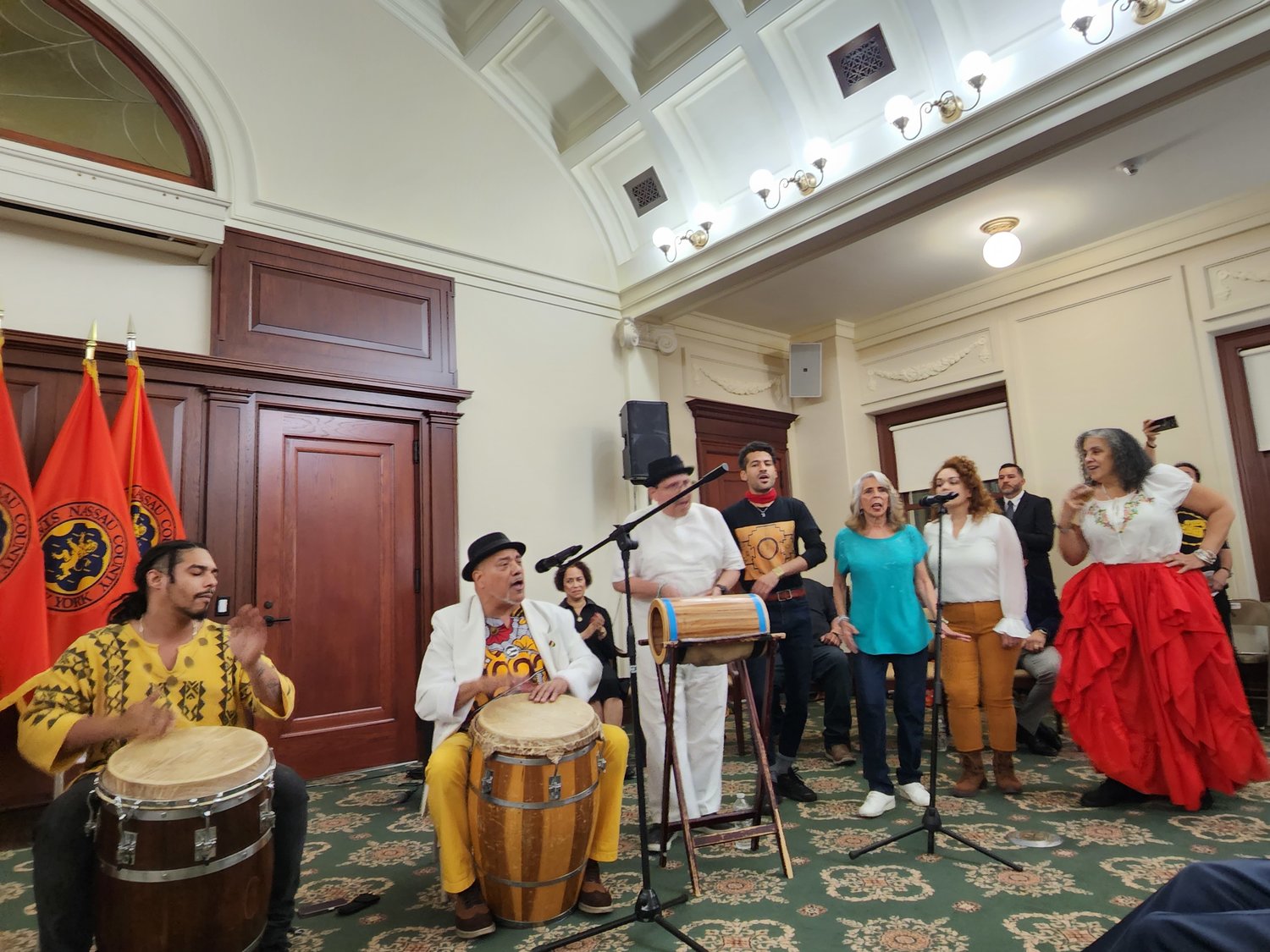 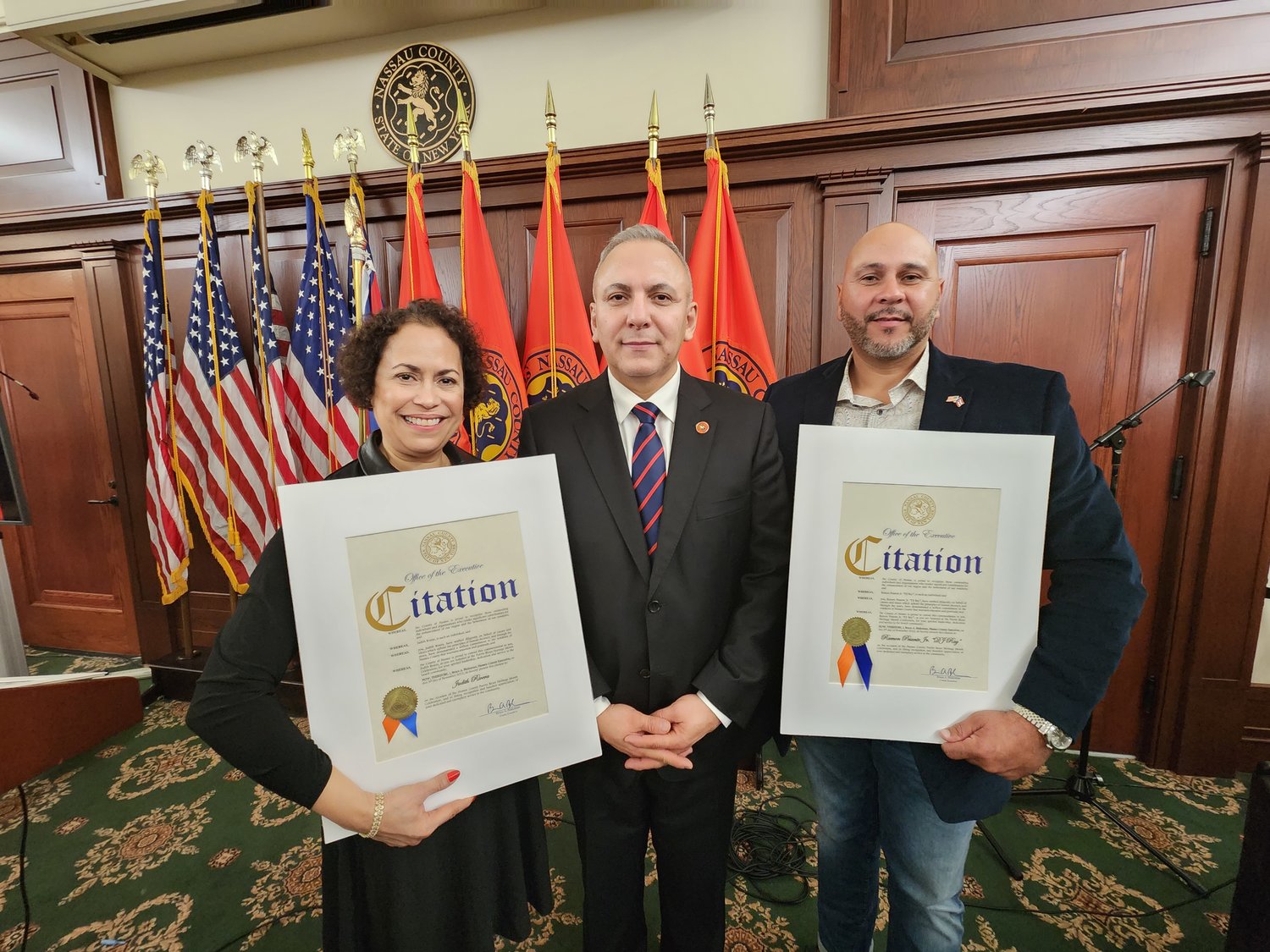 Judith Rivera and Ramon Pesentae Jr. received recognition for their community service in Glen Cove. With them was Herbert Flores, who presented Rivera and Pesentae with their citations.
Roksana Amid/Herald photos
Previous Next
By Roksana Amid

The office of Nassau County Executive Bruce Blakeman presented a night full of folklore and festivities to honor the Puerto Rican community during their Nov. 3 event. The month celebrates 500 years of history and the subsequent blending of Spanish, Taino Indian and African influences, which are all represented in the island’s rich culture and traditions.

Puerto Ricans throughout Nassau County were recognized for contributions to their respective communities and were selected by Herbert Flores, executive director of the Nassau County office of Hispanic affairs. Among the evening’s 10 award recipients were Glen Cove natives Judith Rivera and Ramon Pesentae Jr.

Rivera, a graduate from New York University, received her bachelor’s in journalism with a public relations concentration. Her previous work experience includes roles as a sales account executive with Richner Communications and director of public relations and marketing for the Brooklyn Conservatory of Music. Rivera is currently the director of community sales at the Atria Glen Cove and is the owner of her own private dance studio Miss Judy’s Dance Studio at Ballroom Legacy in Sea Cliff. She is widely recognized for volunteering her time to many food drives and charitable events on the North Shore.

“I was really inspired by someone that was unknown to me,” said Flores, who first met Rivera two years ago in Glen Cove during a food drive. “The community recognized her as being a very strong leader and supporter of the vulnerable population that we have among Latinos.”

Pesentae has worked in residential and commercial property management for over 24 years, while sharing his passion for music alongside Don-Q Entertainment. Pesentae is widely known for his charitable music contributions to various events for causes such as the Tim Tebow Foundation’s “Night to Shine.” Pesentae is also a supporter of the Nassau County Police Hispanic Society.

“It’s just been a great pleasure to be a positive influence in our community,” said Pesentae. “And just teaching today’s youth that character is everything.”

The event saw music by BombaYo, who played traditional Bomba music, which arose from the island’s roots in African slavery. During the performance, the small assembly room was filled with energy and rhythms that had guests out of their chairs and dancing in the aisles.

“The drum has power,” said Jose Ortiz one of the evening’s honorees, better known by his stage name Dr. Drum in BombaYo. “It is the voice of our ancestors.”

The evening also highlighted Puerto Rico’s current state of crisis, resulting from natural disasters, the coronavirus pandemic, government mismanagement and population decline. Although it’s part of the United States, the territory lacks full political representation, which was a concern for many of the evening’s speakers.