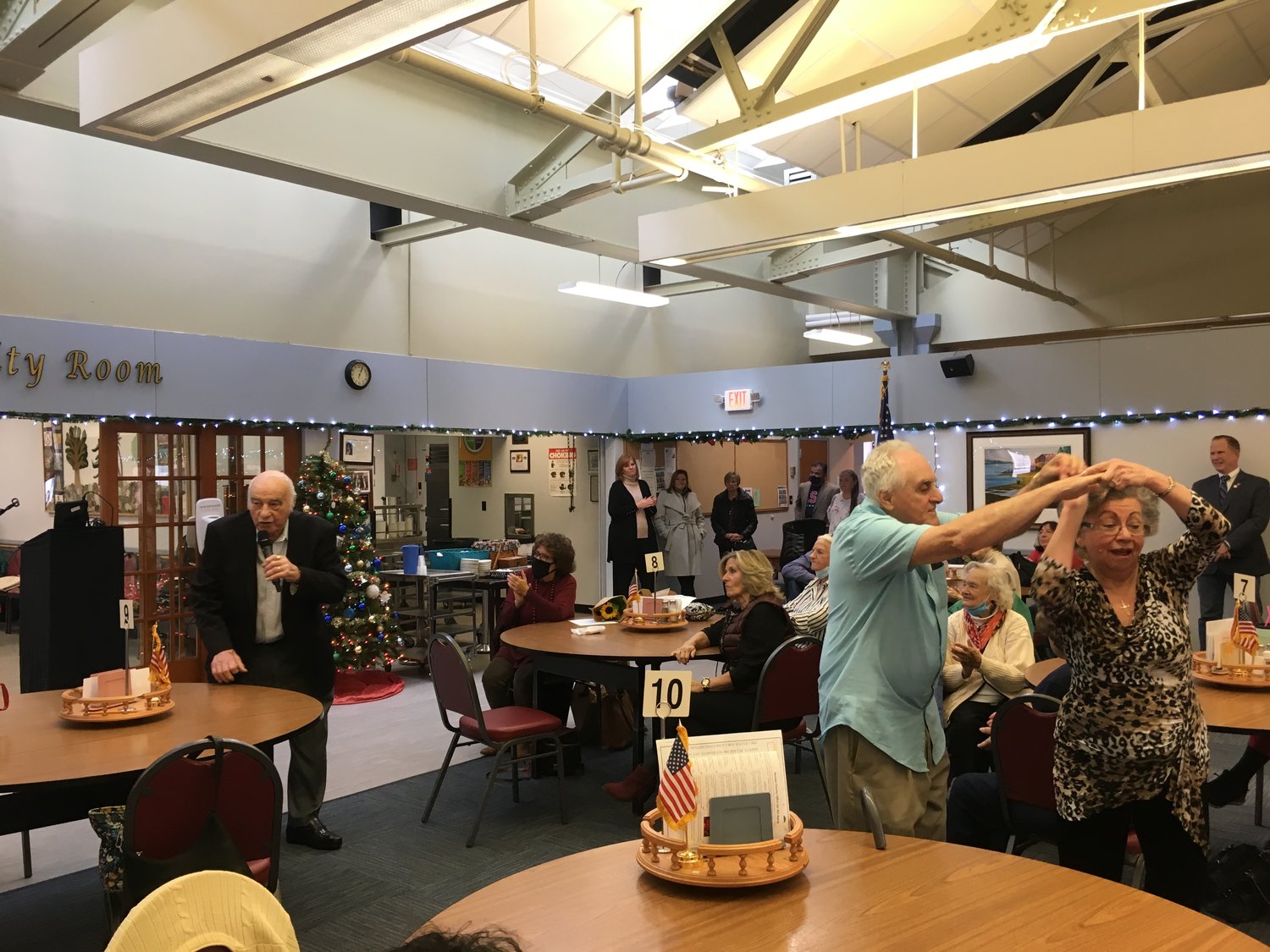 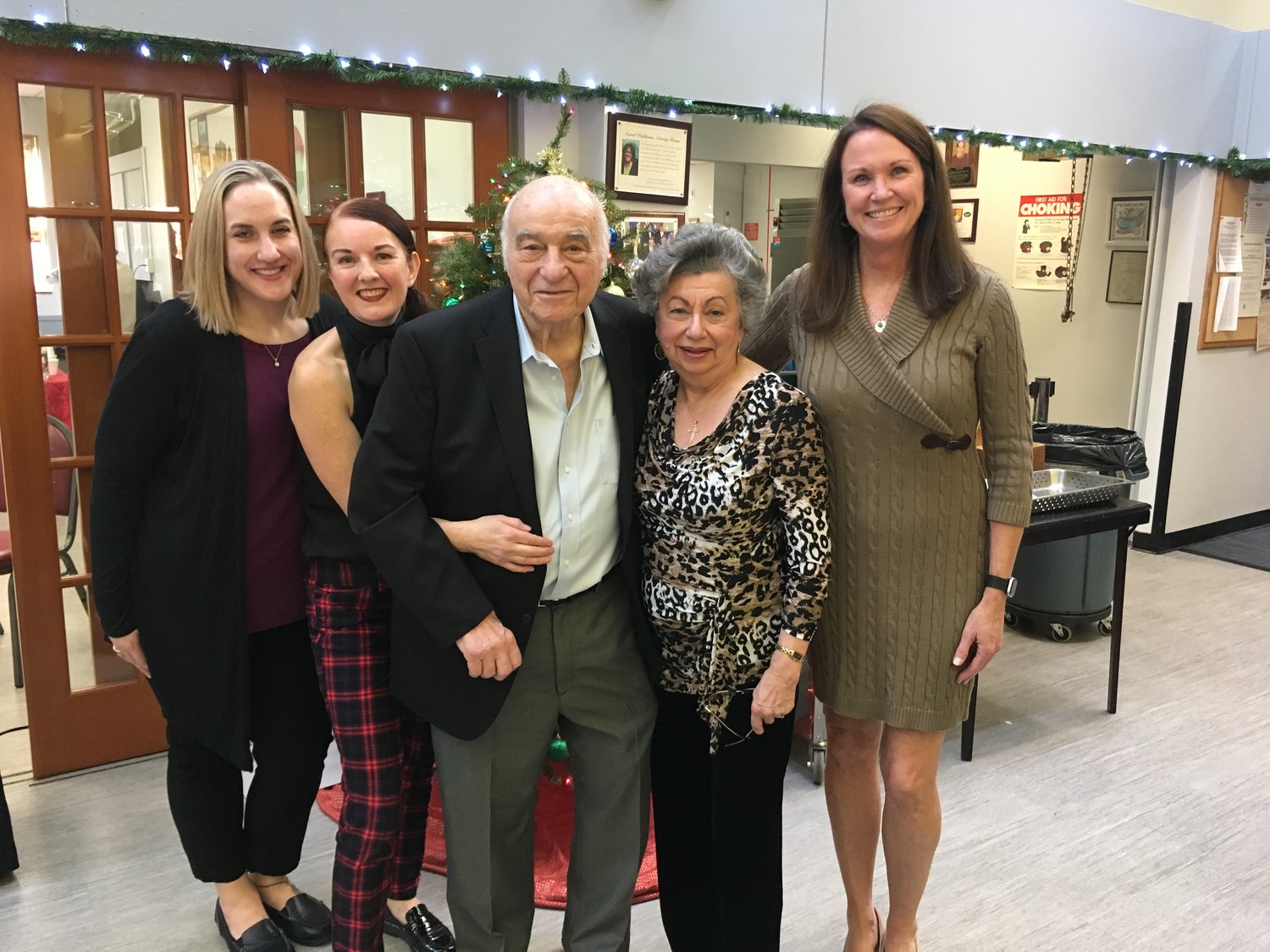 It was a bittersweet afternoon at the Glen Cove Senior Center last Friday: A celebration in the dining room marked the end of the Golden Age Happy Hours Club, which dissolved after more than 35 years. Charlie Pappas, the club’s longtime president, sang a few songs, prompting some members to get up and dance.

Pappas, 90, of Glen Head, joined the senior center, and the Happy Hours Club, after he retired in 1997, and in 2004 he took over as president. “Being president of this club was a great joy to me,” he said, “but I felt many years ago it was time for a new president, new blood to take over.”

He couldn’t persuade anyone to do it, however, he said, so now members are simply bringing the club to an end.

That resulted in some good news, though, for the center. “Over the years, we’ve collected a little bit of money,” Lucy Van Horn, the club’s vice president, said. “. . . We find ourselves in a position to help the Adult Day Program, which was seriously damaged due to the hurricane” — Hurricane Ida, last August.

The Happy Hours Club made a donation of $10,000 to the Adult Day Program, and gave another $8,000 to the SAGE Foundation, the senior center’s fundraising arm.

“Charlie was very thrifty,” Van Horn said of Pappas. “We went on trips, we went out to lunch, we had entertainment, but we were also careful.”

Mayor-elect Pam Panzenbeck, who has been president of the SAGE Foundation for the past year, thanked the club for the donation. “We’ve really been at a loss to raise money since the pandemic,” she said, “and this is such a boost.”

“This will help Glen Cove Senior Center members when they come into a problem, whether it’s to pay a utility bill, a doctor bill, or whatever it may be,” Van Horn said of the donation to SAGE. “In order to allow more senior center members to avail themselves of this money, we are asking that the funds be given to the seniors in amounts that do not exceed $500. That way, a variety of people can be helped. It is our hope that other people will see what’s happening, and they too will donate to the senior center and help this fund grow, rather than just diminish.”

Pappas credited Carol Waldman, the senior center’s former executive director, who retired in 2019, with opening “a whole new world” for him. “She heard me strumming on my guitar and singing country songs with people at the center,” Pappas recalled, adding that Waldman asked him to put on a show in the dining room. “Even though I had never done this before, it was a big hit, and that’s when a new career was now opened up for me.”

From there, Pappas said, he began singing country and cabaret songs, and entertaining at other senior centers, assisted-living facilities and nursing homes as well as the Adult Day Care Program.

According to Waldman, the Happy Hours Club formed soon after the senior center opened in 1979, founded by original members of the center. “They were wonderful people, and their Tuesday-afternoon meetings were the highlight of our week for years,” Waldman said. “Charlie inherited a club that had years of memories behind it. And then, with his own brand of warmth and fun-loving spirit and incredible talent, created so many more.”

The club met once a month, Pappas said. Members paid annual dues, and held fundraisers on occasion. “Before I took over the club, all they did was play Bingo,” he said. “When I became president, we started doing day trips. It expanded because of that, and we had over 120 members.”

Throughout its existence, Pappas said, the club used its funds to help members in need. “When there were emergencies, we helped people,” he said. “That’s been part of the Happy Hours since the beginning: When somebody’s in trouble, we’re the family.”

Van Horn, 78, joined the club when she retired as the senior center’s activities coordinator. “What’s nice about having that group, it was something to keep people busy and amused, and keep contact with their friends,” she said. “People don’t realize, until they hit their 70s and 80s, how important it is to meet with your friends. I think that people who are younger don’t realize how something like this can become such a wonderful experience for an older person.”

Waldman said that Van Horn and club treasurer Diane Romano were also instrumental in sustaining the group for so long.

The donations, Waldman said, “are actually bringing the club full circle,” [she told the gathering last Friday. “You gave birth to this center, and now you have found a way to sustain it so it continues to thrive for others for years to come. That doesn’t feel like an ending to me. It feels like an evolution of a true loving and profoundly compassionate community.”