Budget calls for reductions in spending 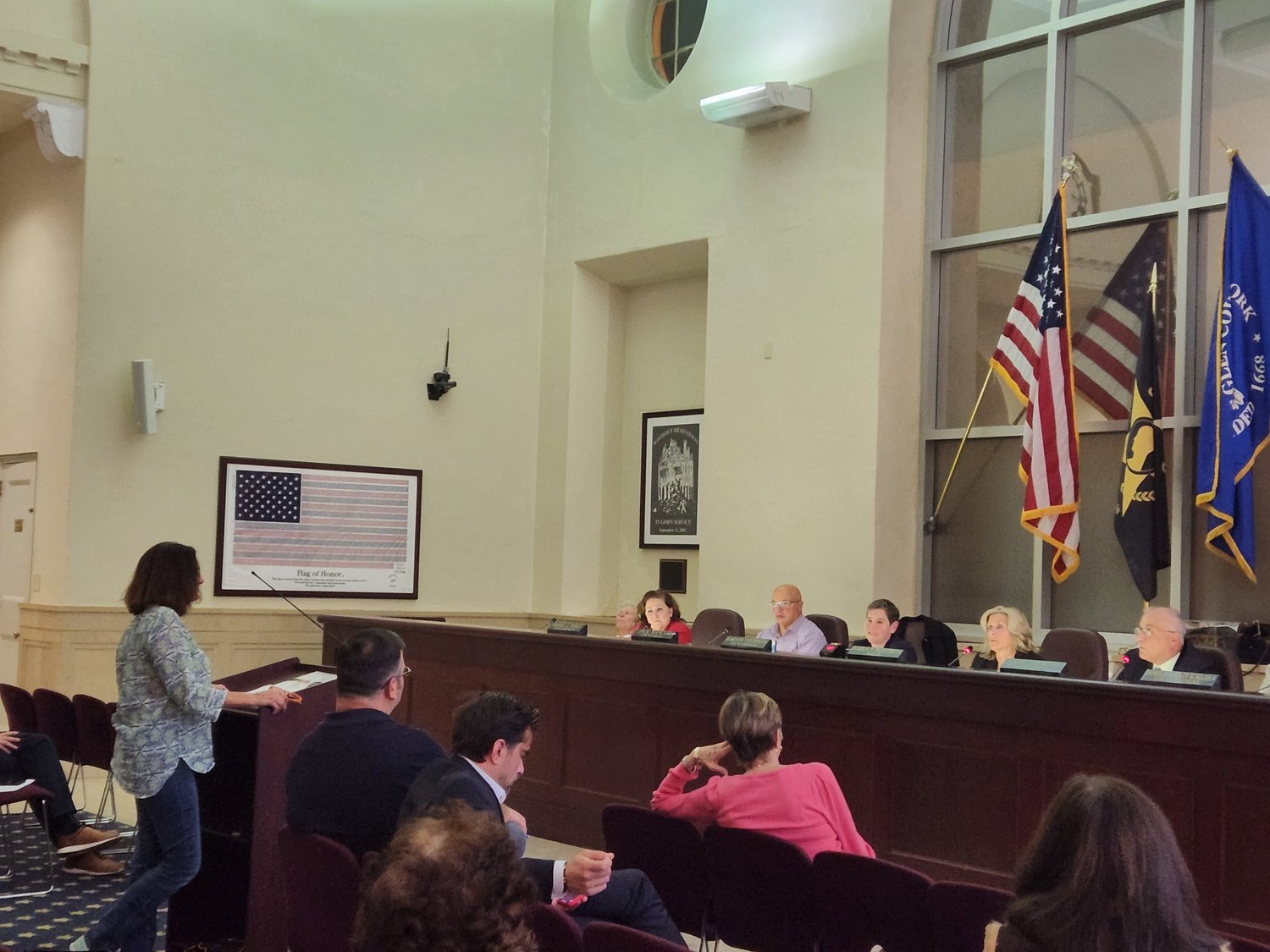 Alba Gamble asked members of Glen Cove City Council about funds reimbursed by Nassau County. She said she was concerned about the city’s decision not to raise taxes, citing issues of inflation and rising costs
Roksana Amid/Herald

Even if we had a contract written for it, it’s a one-shot revenue.”
Marsha Silverman Councilwoman, Glen Cove
By Roksana Amid

The Glen Cove City Council approved a proposed $63.3 million budget for 2023, the first spending plan under Mayor Pamela Panzenbeck since her election last year. The new budget keeps residential property taxes steady, and there will be a small decrease of roughly 4 percent in commercial property taxes.

The budget calls for spending cuts of $1.4 million compared to the current adopted budget and shows an overall decrease of 2.2 percent in spending over 2022. The spending plan passed by a 4-2 vote.

The two council members voting against the spending plan were Councilwomen Marsha Silverman and Danielle Fugazy Scagliola, both of whom cited concerns that incorporating a refund of $800,000 from Nassau County into the city’s 2023 budget is a one-time-only revenue source.

The purpose of the county refund is to correct wrongly calculated reimbursements made to the county from payments in lieu of taxes, or PILOTs, for a decade. The error was brought to light in a 2021 audit by the state comptroller’s office of the city’s Industrial Development Agency. That audit found that some of the payments paid to the county should have gone back to the city.

Glen Cove City School District Superintendent Dr. Maria Rianna said the school’s attorneys are speaking with the city, because the district believes a portion of the reimbursement should go to the school district and another portion to the library.

“We are aware that there was an overpayment to the county by the city,” Rianna said. “We look forward to the city recovering that money and providing to the school district and the library the monies that would be ours.”

At the budget meeting, Silverman called the budget overly optimistic, since the funds are not in the hands of the city yet.

“Even if we had a contract written for it, it’s a one-shot revenue,” she said after the meeting. “And it’s being used against recurring expenses.”

Silverman added that using one-shot revenues for operating expenses is frowned upon by credit raters like Moodys and other authorities like the state comptroller.

Councilwoman Barbara Peebles responding to the two councilwomen’s concerns that she had faith in Panzenbeck’s judgement.

“I can’t even imagine a scenario where (Panzenbeck) would take a risk if she wasn’t completely confident that we’re going to get what was due us and what was promised to us,” She said.

When the city is receiving the $800,000 reimbursement was unclear at the City Council meeting, but afterwards Panzenbeck said the funds would be paid in a lump sum by the county at the beginning of 2023.

When asked about the possibility of a Moodys credit rating decrease, Panzenbeck said she didn’t see a potential for change because of the city’s other revenue sources.

City Comptroller Michael Piccirillo said that $565,000 of the refund is being used for the general fund to help flatten tax rates, and $235,000 towards reducing the city’s current fund balance deficit. Piccirillo said the $800,000 spurs no change in residential taxes and a decrease in commercial property taxes.

“It’s really a win-win in that we have the ability to address the current deficit and also keep taxes flat for next year,” he said.

Unlike the one-time sale of an asset, such as land or a building, in the ordinary course of business, PILOT payments are a recurring source of revenue based on the term of the PILOT agreement.

The city’s credit rating is primarily impacted by financial operating results. As long as the city continues to favorably managing expenses within the budget, achieve revenue targets, and improve the city’s fiscal governance, credit ratings should upgrade.

Piccirillo said he views the timing of these PILOT reimbursements as an issue.

“While yes, it’s a lump sum revenue infusion in 2023, these revenues should have been received in prior years.” Piccirillo said. “I can only assume that because they weren’t, the tax levy was raised higher than it otherwise should have been.”