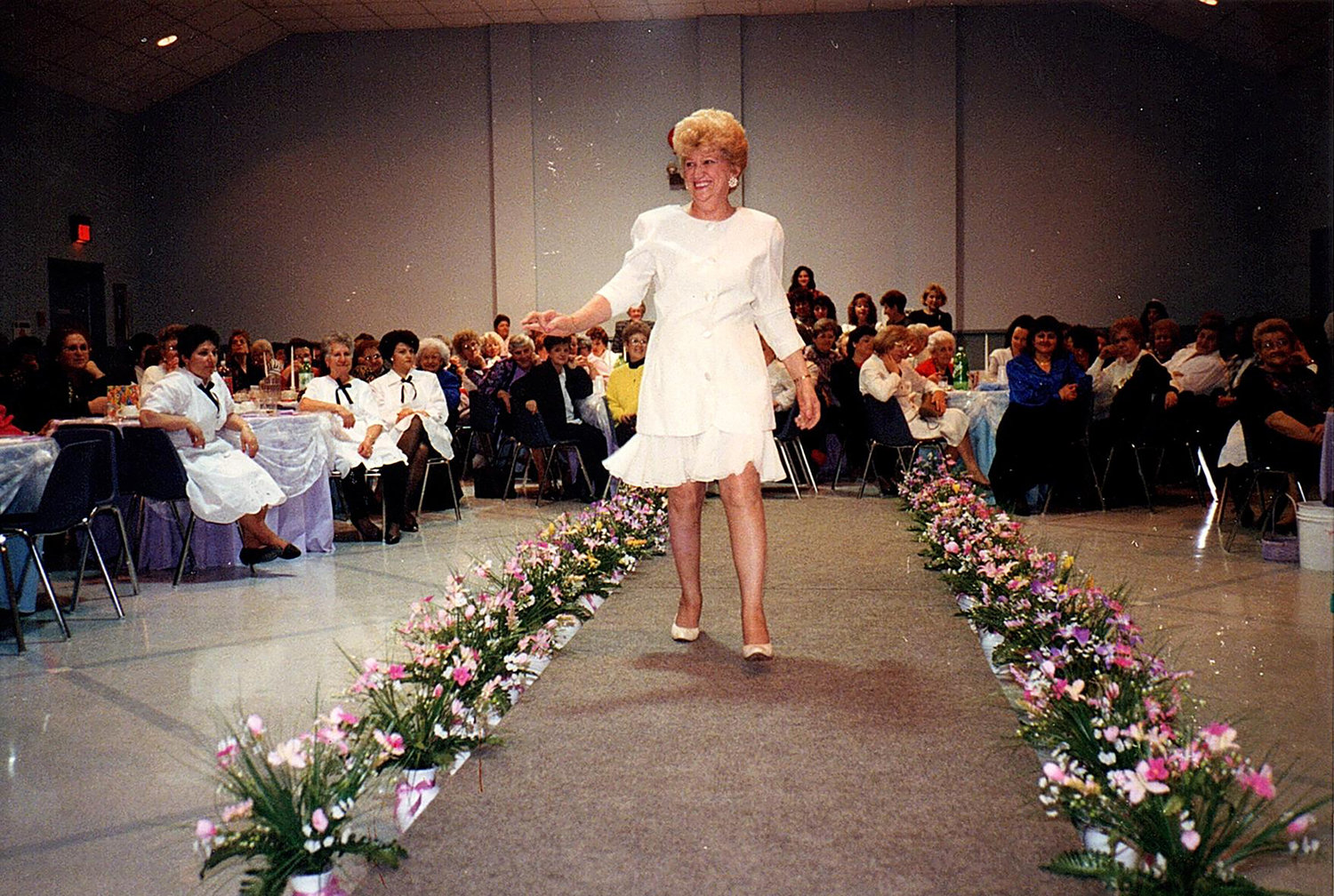 Yolanda Ruthkowski, 68, strutted down the runway for the St. Rocco’s fashion show in 1993.
Courtesy Robin Ruthkowski 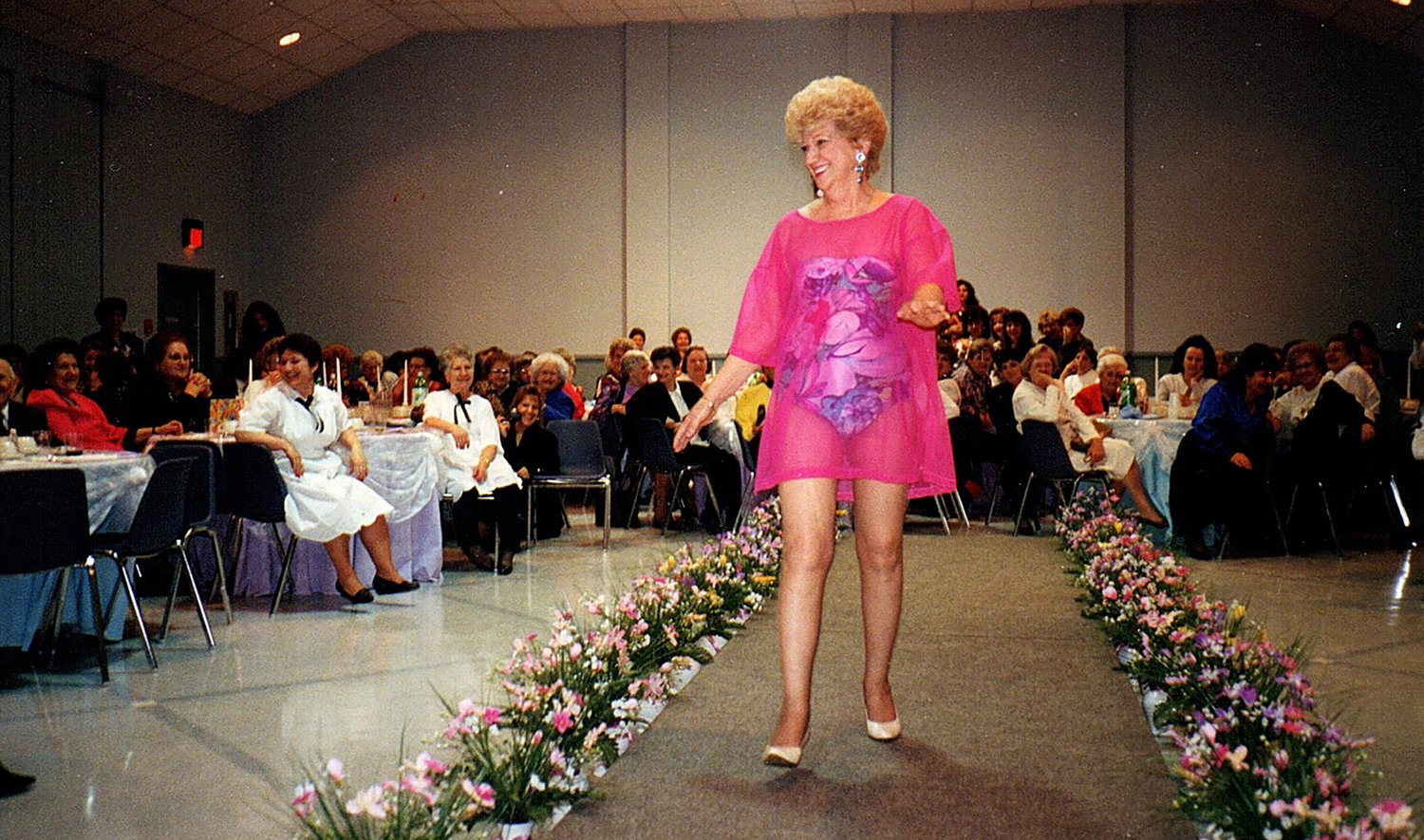 At the St. Rocco’s fashion show in 1993, she even modeled the swimsuit collections. She was one of the oldest women to have walked the runway for the fundraiser.
Courtesy Robin Ruthkowski 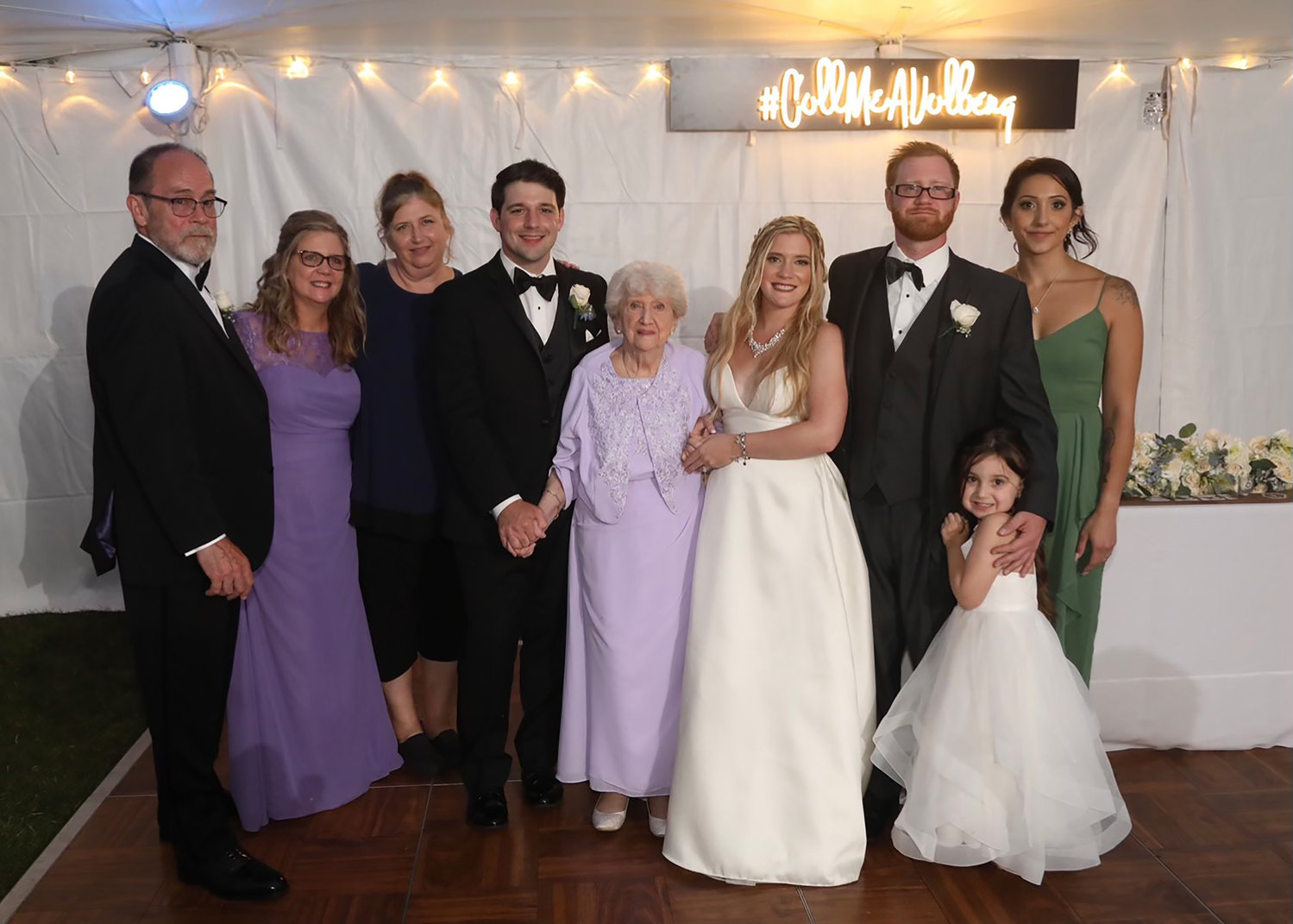 She waited all year for the feast, and she attended every night and worked every night.”
Phyllis Gallick Ruthkowski’s daughter
By Letisha Dass

A force of goodwill, Yolanda Ruthkowski, of Glen Cove, was a feisty woman who left an imprint on everyone she met. Known as the ‘salad queen’ of St. Rocco’s Feast, she devoted her life to her Catholic faith and family.

“She always had time for her family, her friends, [and] for me,” Phyllis Gallick, Ruthkowski’s daughter, said. “Nothing was more important to her than her children and her grandchildren.”

For the past 24 years, she lived with Gallick until six months ago when she moved into Glengariff Rehabilitation and Health Center, a nursing home.  Ruthkowski, 96, died on April 29, after years of struggling with poor health and dementia.

“She wasn't herself for these past two and a half years,” Gallick said. “So, it was time to mourn the loss of the woman that she had been to us all.”

Robin Ruthkowski, a grandchild who lives in Florida, recalled how during the summers of her childhood, her grandmother booked flights for her to visit Glen Cove to spend the summer.

Ruthkowski fell in love during World War II when she met her husband, Frank Ruthkowski, a veteran of World War II. After marrying in 1946, the couple spent 42 years together, raising their two children Nicholas and Phyllis until Frank died in 1988.

Ruthkowski was a survivor of loss. Born to Italian parents, Carlo and Filacetta Ceglia, she was one out of 11 children, all of whom predeceased her.

Her eldest child, Nicholas Ruthkowski, died in 2014 after battling bone marrow cancer. His daughter, Robin said it was remarkable that her grandmother was able to stay so strong after losing so many people she loved.

Part of her strength could be attributed to her dedication to her faith, Robin said, adding that  her grandmother was devoted to her prayers.

“Praying for her was a lifelong thing,” Robin said. “She never failed to pray the rosary, really. And we would do the Divine Mercy together.”

At St. Rocco’s she volunteered for everything before her health began to decline during the past three years. Always ready to express her faith through service, Ruthkowski was part of St. Rocco’s Rosary Society, helped raise money for the church’s fashion show fundraiser, donated a statue of the Sacred Heart, and worked at the annual feast every year.

And although Ruthkowski was recognized for running the salad department, she helped everyone at the feast.

“She was there early in the morning with everyone,” Lori Testa, president of the Rosary Society said. “She would prepare the foods [for] whatever we were making, or whatever they were making. She was always a part of that.”

Because of her commitment to working at the feast serving salad, the church dedicated a banner to Ruthkowski after she was no longer able to continue volunteering or attending the celebration. The banner, which calls Ruthkowski the salad queen, is hung every year in the church during the feast in the Madonna Hall.

“She was very active in the feast for many, many years,” Lori Testa, president of the Rosary Society said. “She never said no to anyone.”

For the fashion show fundraiser, Coleen Spinello, a longtime friend of Ruthkowski, remembered how she would walk door-to-door with her friend Mary Jane asking people to donate. “They would pound the pavement rain or shine or snow or sleet,” Spinello said.

At one of the church’s fashion shows, Testa recalled that Ruthkowski was the oldest woman to model, even for the swimsuit collection. She loved being a part of it. “She had such confidence,” Testa said.

Forever the independent woman, Ruthkowski drove until she was 92 years old. Robin remembered how her grandmother used to speed down the road like “Speedy Gonzales.”

“She had it in her mind that she was the best driver in the world.,” Robin said. “She was literally the worst driver.”

When Ruthkowski was unable to drive to church anymore, she would seek out Testa or Spinello to give her a ride.

“If anybody remembers her, it would be that she never sat still for a moment,” Gallick said. “She would literally come home and go literally right back out.”

“I would swing by and  we would carpool together,” Spinello said. “We would laugh the whole time and she would tell me stories of the good old days.”

Her outgoing personality always was evident at events, especially if there was dancing. Gallick said she knew every dance of her era. She never had a filter to anything she said.

When Phyllis’s daughter, Colleen, got married in 2020, Ruthkowski attended, despite not being unable to share her dance moves with everyone.

“She was just fun,” Robin said. “She was a very independent, very feisty, very lively person. She loved to dance. She was outgoing, outspoken.”