Most Glen Cove parents — and their kids — welcome children’s vaccine 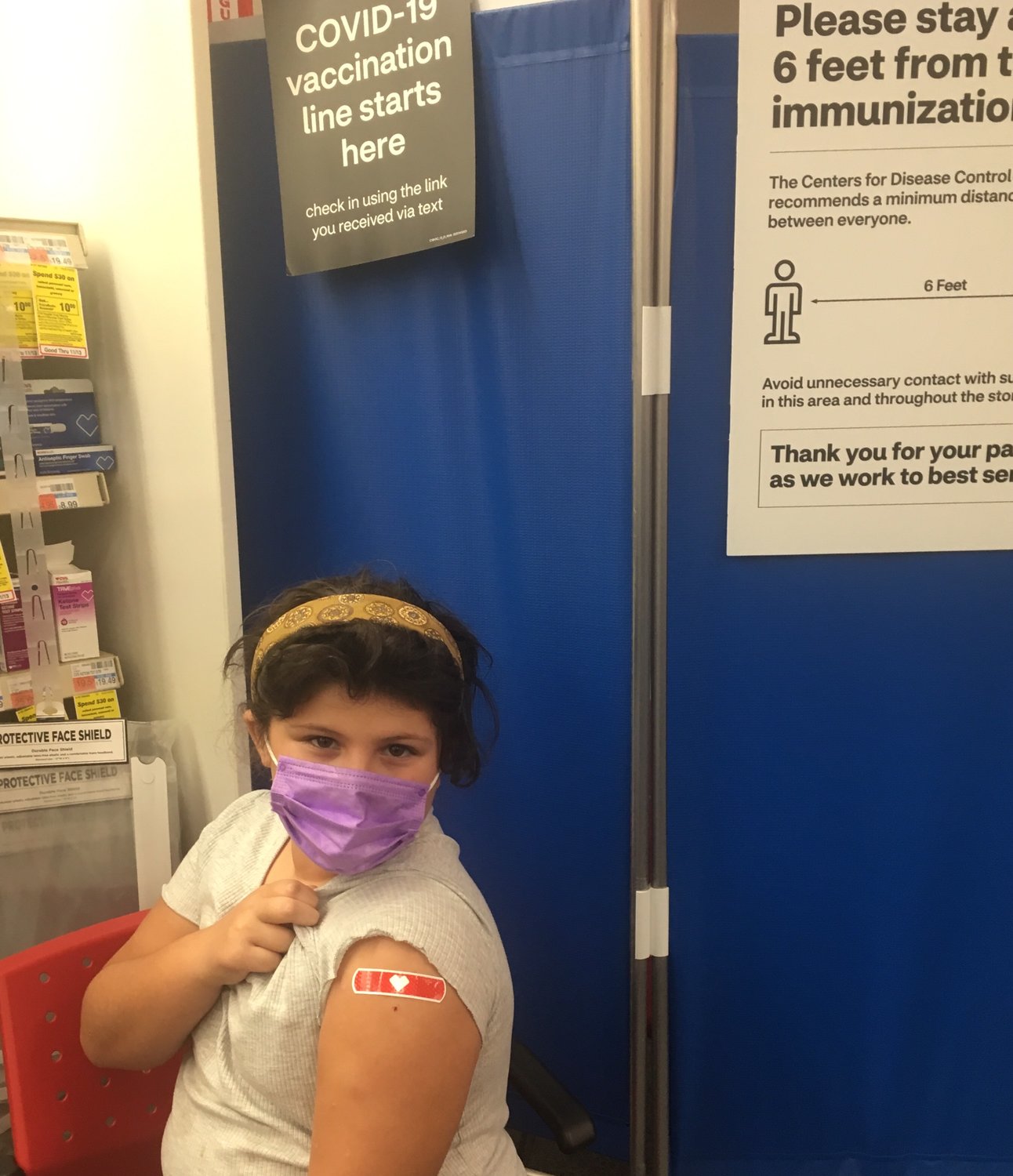 Juliette Castronovo, 7, got the first dose of the Covid vaccine on Monday.
Courtesy Rebecca Castronovo
By Jill Nossa

Many parents in Glen Cove are breathing a sigh of relief, because their children are now able to receive the Covid-19 vaccine. The Pfizer-BioNTech shot was authorized for children ages 5 to 11 by the Food and Drug administration on Oct. 29, and cleared by the U.S. Centers for Disease Control and Prevention on Nov. 2.

The news had many local parents calling their pediatricians and scheduling appointments for the first dose of the shot. Glen Cove resident Joanna Zuppardi had her 9-year-old daughter, Ava, vaccinated on Nov. 3. “We had been waiting for so long,” Zuppardi said, “and I was following the news very carefully.”

When the vaccine became available early this year to senior citizens, Zuppardi helped her parents schedule their appointments, staying up late to navigate the online system. She said she was prepared to do that again for her daughter, but the process this time around was much simpler. She called her pediatrician as soon as the shot was available, and took Ava in for her first dose.

“She was so excited when I told her it was time to get it, she started jumping up and down,” Zuppardi said. “And then she had absolutely no reaction. She said it didn’t even hurt, and she’s someone who is not great with needles.”

Zuppardi said she did her research before making the appointment, concluded that it was the right decision for her family, and ultimately didn’t see any point in waiting.

“It opens travel for us,” she said, recalling that on one family trip, she kept Ava in a KN95 mask, and they only ate outdoors. “I feel a totally different level of comfort, because, yes, there are breakthrough infections and she could get sick, but I really don’t feel like I have to worry about something really horrible happening to her, or to us.

“I feel like between the vaccines and the oral therapies that are available now, it’s a manageable disease,” Zuppardi added, “and the world can start opening up.”

Pfizer’s vaccine for 5- to 11-year-olds is a smaller dose than the one given to those 12 and older, but like the adult formula, it is also a two-dose series given three weeks apart. The formula is also slightly different, so it is easier to store and to use in clinics and pediatricians’ offices, according to the CDC.

Glen Cove parent Rebecca Castronovo, whose daughters are 9 and 7, said she had mixed emotions when the vaccine was approved for that age group. “I was excited and I was nervous, “ she said. “But they were so excited . . . it was like Christmas to them. I think they’re scared, and they want their lives back.”

Both of Castronovo’s daughters have pre-existing medical conditions, and before the pandemic hit, her younger daughter had been hospitalized several times with pneumonia. But even without those factors, she said, she thought their feelings would be the same. “They’ve seen us be vaccinated and have no issues,” she said, “so they weren’t scared, they were hopeful.”

She made appointments online last week at the CVS pharmacy in Sea Cliff. The process was simple, she said, and the three children waiting to get the shot on Monday with her 7-year-old were “pep-talking” each other.

“Juliette was scared — not of the side effects, just of getting a shot,” Castronovo said, “but the nurse distracted her and she didn’t feel a thing.”

She said she believed that having her children vaccinated would help normalize their everyday lives. “It means we can travel; we won’t be nervous when the kids go to school,” she said. “They can have play dates and sleepovers, the normal things that they miss.”

As the weather gets colder, it also means the family can venture indoors for activities or eat at restaurants. “We don’t do indoor venues,” Castronovo said. “It’s a risk we weren’t willing to take.”

She stressed that, as much as of a relief as it is, getting the vaccine was ultimately her daughters’ choice. “If they weren’t so eager to do it, it’s not something I would push them to do,” she said. “They had to be a part of that decision-making process.”