A big win for GOP in Nassau County and town 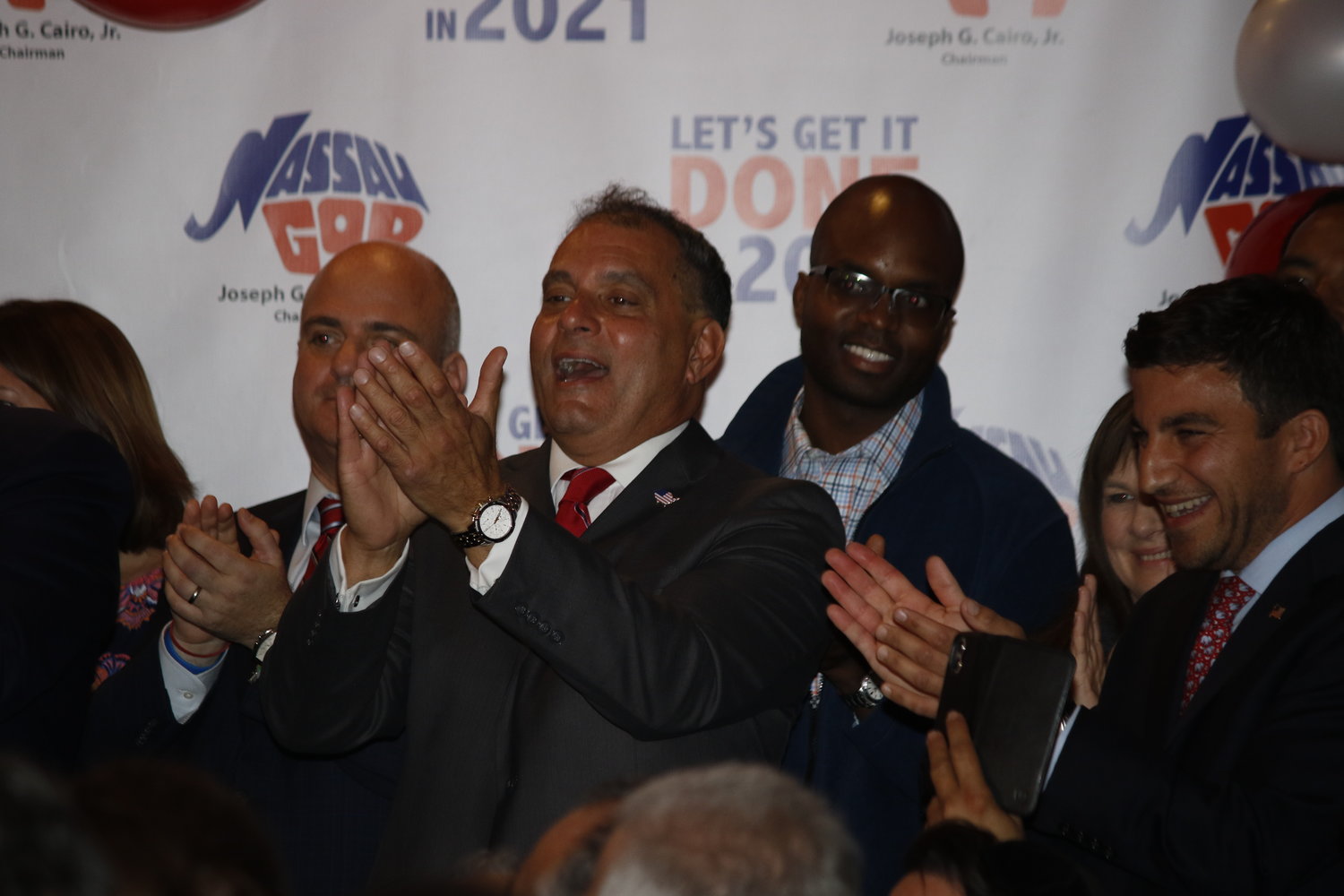 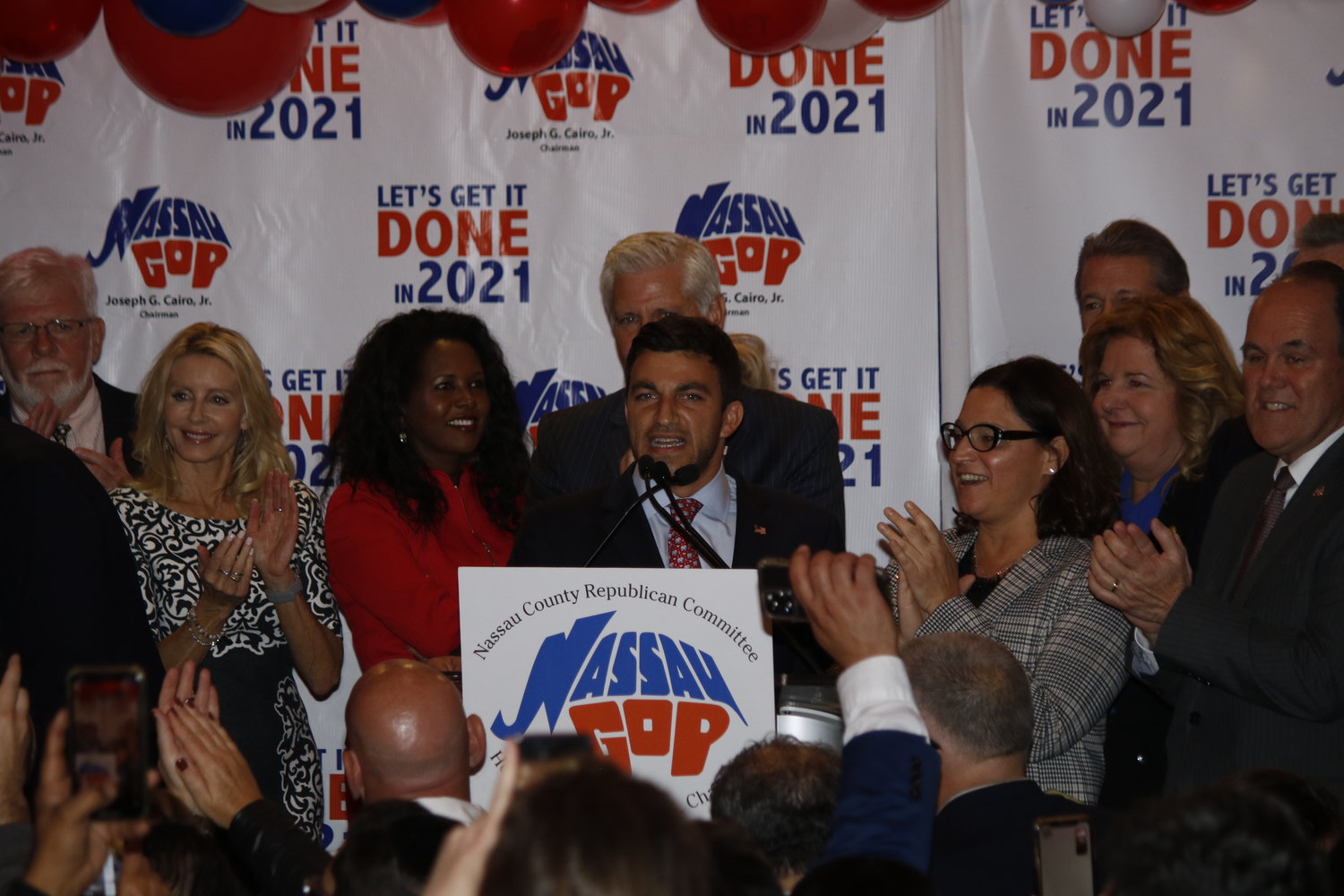 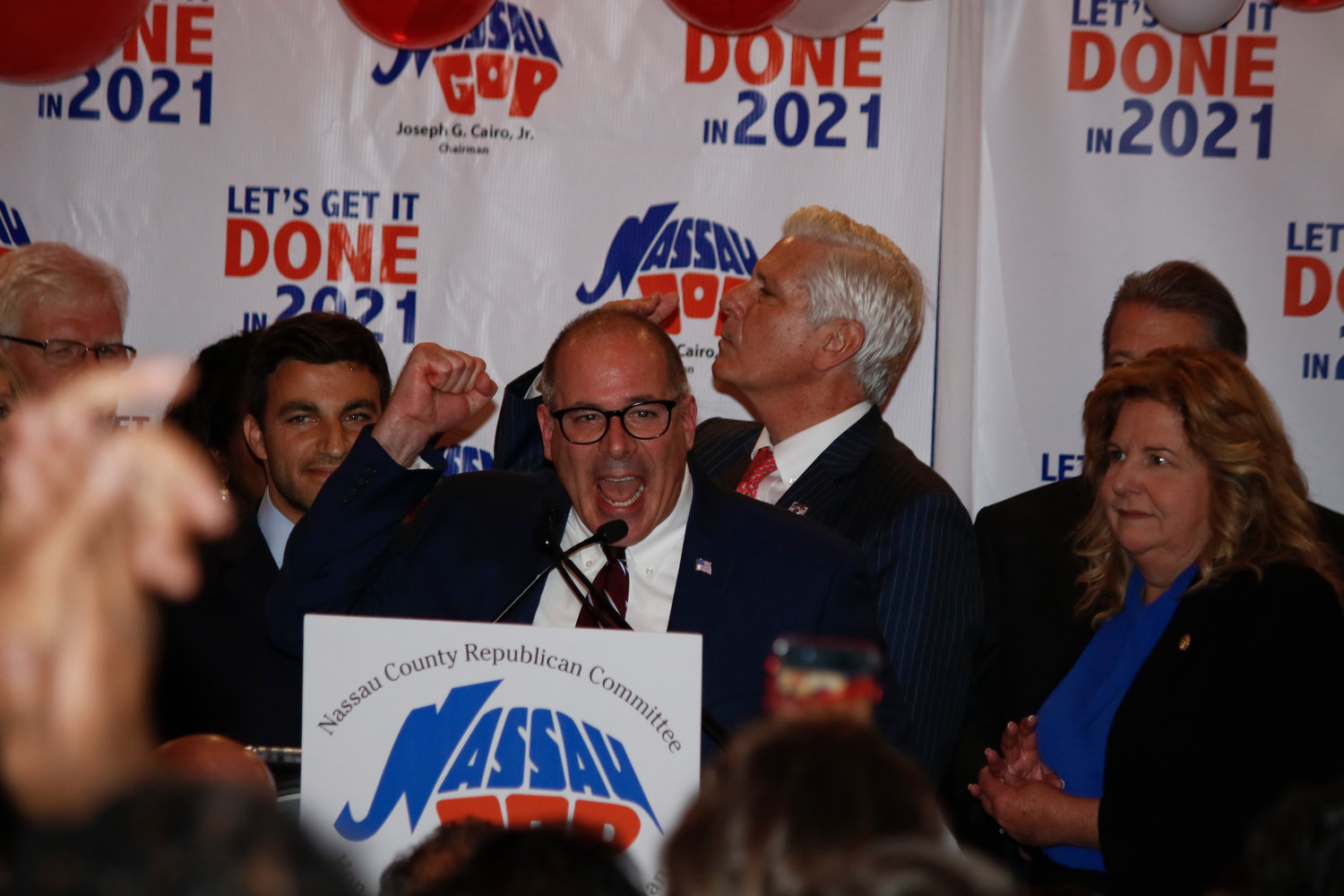 Town Clerk Richard LaMarca was new to politics when he first ran in 2017. He won handily on Tuesday.
Christina Daly/Herald 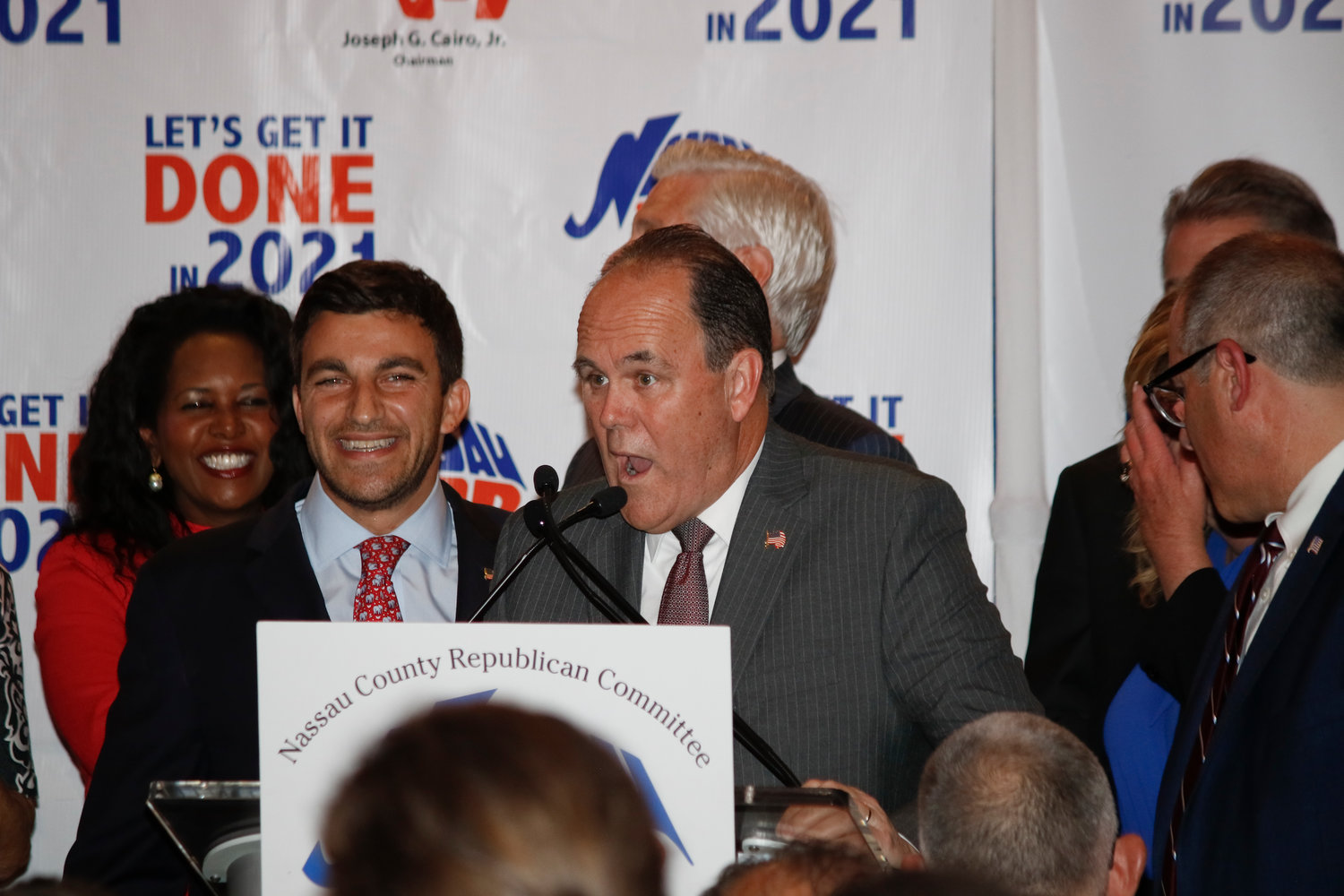 Tom Hand said his team’s victory was a reflection of residents’ satisfaction with the number of quality-of-life improvements.
Christina Daly/Herald
Previous Next
By Laura Lane

Oyster Bay Town Council members — Republicans Tom Hand, 61, a former commissioner of the Massapequa Water District; Lou Imbroto, 37, a litigation attorney in private practice; and Michele Johnson, 47, an attorney — were also re-elected. Hand and Imbroto were originally appointed in March 2017, and Johnson in July 2013. When they ran for office in those years, they won by large margins.

On election night this year, Johnson received the most votes, followed by Imbroto and Hand.  Republican Town Clerk Richard LaMarca was also re-elected, garnering roughly 68 percent of votes in that race.

“It’s only the beginning, working with great people like Michele Johnson, Lou Imbroto, Tom Hand and Rich LaMarca,” Saladino said in his victory speech. “We are embarking on a journey where we prove we deliver on our promises, protecting taxpayers, protecting the quality of life and protecting safe communities.”

Another upset for Democrats was Nassau County Legislator Josh Lafazan’s apparent loss. His Republican challenger, Paolo Pironi, a newcomer, won by less than 3 percentage points, a margin that could be reversed when more than 20,000 absentee ballots are counted.

Lafazan, an independent from Woodbury, began his career in the Legislature in 2017 when he was just 23, the youngest county legislator ever. He is known for working across the aisle, although he caucuses with the Democrats.

“Lafazan has a chance in the absentee ballots, and I really hope he pulls through,” said Bob Freier, a former candidate for Oyster Bay Town Council and a county Democratic committeeman. “The entire night was disheartening nationally, and particularly locally.”

Lafazan could not be reached for comment, but he posted on Facebook, “From day one, we built a campaign based on honesty, positivity and a belief that government should work to improve the lives of every member of the community. Whatever the results, I am so proud of the race we ran together.”

“I want to thank all the residents who voted for me, and want real, honest leadership restored in our district,” Pironi said on Thursday. “They voted for the safety and security of their families, a promise to revamp the reassessment system and a representative who will be responsive to the needs of the district.”

The official outcome of Lafazan’s race, and that of Democratic Legislator Arnold Drucker, who lost by less than 1 percentage point to Republican Daniel Alter, is important, because if one of them loses, the Republicans will have a supermajority in the Legislature, which will enable them to override a veto by the county executive.

“Then the GOP will be able to do whatever they want,” Freier said. “The Democrats won’t even need to show up for a vote.”

Republican Hempstead Town Councilman Bruce Blakeman is the apparent winner in the county executive’s race. The results have not been made official, but Blakeman had 52 percent of the vote on Tuesday night, to incumbent Laura Curran’s 48 percent.

“I think the Republican Party was on the right side of the issues,” Blakeman said on election night. “The two biggest issues were taxes and people were very upset with the broken reassessment system. They were very upset they were not getting the tax relief they were entitled to.”

Curran had not conceded as of Thursday, saying, “This is not over, and we must trust the process.”

Republican Anne Donnelly, a 32-year career prosecutor in the Nassau district attorney’s office, was declared the winner in the contest for D.A. Donnelly defeated State Sen. Todd Kaminsky, a Democrat from Long Beach, garnering 60 percent of the vote.

Saladino, 59, of Massapequa, was a state assemblyman for 13 years before giving up his seat to lead the Town of Oyster Bay. He was appointed supervisor in February 2017 after John Venditto resigned, facing federal corruption charges. Saladino won in November 2017 with the support of 52 percent of voters. When he ran for re-election in 2019, he won by an even larger margin, capturing 59 percent of the vote.

Johnson said she was impressed by Saladino’s margin of victory this year, which she said was “unheard of.” When pressed, she said she was also pleased by her own level of support.

“I think it’s because of my ability to work with everybody, no matter what their party, and I’ve been onboard longer,” Johnson said. “This is a great victory for my team. And I think the voters spoke.”

Voters are happy with what the town board is doing, she added.

Imbroto said that residents voted to keep the incumbents because they recognize their commitment to preserving the town’s quality of life. He founded the Quality of Life Taskforce, after serving as town prosecutor, handling code enforcement cases from 2014 to 2016.

Thanks to the task force, Imbroto said, the town has identified areas that need improvement — places where there are zombie homes, houses that are not maintained and illegal housing.

“I was pleasantly surprised that Republicans did so well,” he said. “I’m glad to see voters have some common sense. The GOP supports law enforcement, public safety and residential quality of life.”

His first priority in his new term, Imbroto said, would be to create a town administrative court in Town Hall. “It will be easier to address code violations in a more efficient manner without relying on the District Court in Hempstead,” he said.

Hand said that his team’s victory reflected the number of improvements in residents’ quality of life that were achieved without a tax increase. “That’s the beauty of it all,” he said. “I think voters were enthralled by the improvements we’ve made in the parks. People notice the difference.”

His first order of business, Hand said, will be to pressure the Metropolitan Transportation Authority to build garages for Long Island Rail Road commuters at the Hicksville station, as promised. “The mega-garage they’re now saying they are going to build was not in the plan,” he said. “I’m sending out a letter to them.”

Hand said his win was a reward from residents. “I just want to give back to my constituents,” he said. “The people rewarded us for another term. We have to live up to their expectations.”

Why did the Democrats lose? “Parents are not having their voices heard in school with the [mandatory] mask policy, and the critical race theory is not supported,” Johnson said. “And there are inconsistencies of certain policies, with a resident getting a completely different tax bill from the person living next door to them.”

Freier said that in order for Democrats to come back, the party needs to find a way to get its members to vote. Significantly fewer Democrats voted this year than last, he said.

“We need to look at what happened,” he said. “And we need a consistent message that we need to hammer home.”

Johnson said she believed the results sent a message. “People are fed up and not happy,” she said. “They want their voices heard. This is how they do it. They vote.”