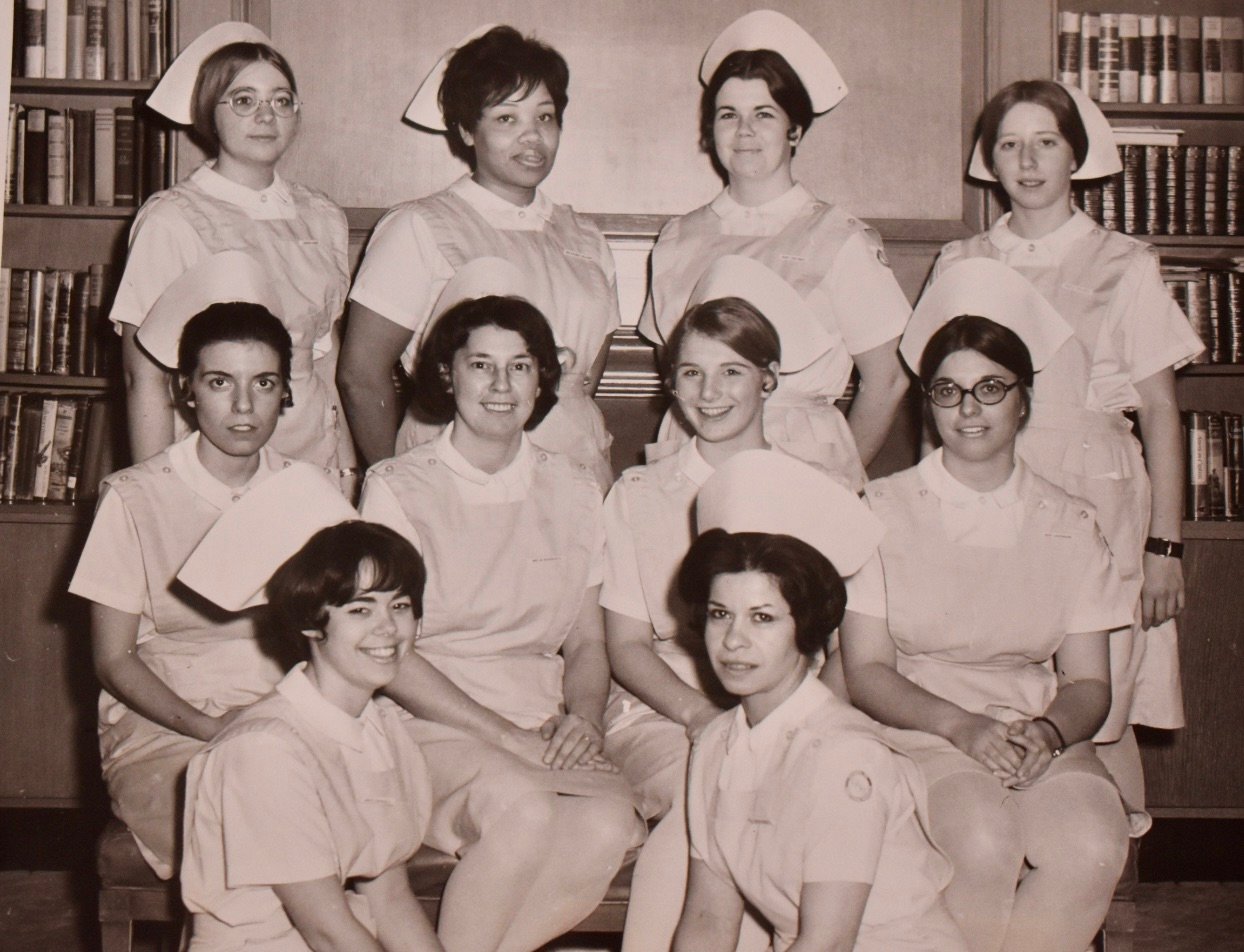 Unlike today, nurses in the 1960s were required to don their caps while working at the hospital.
Courtesy North Shore Historical Museum 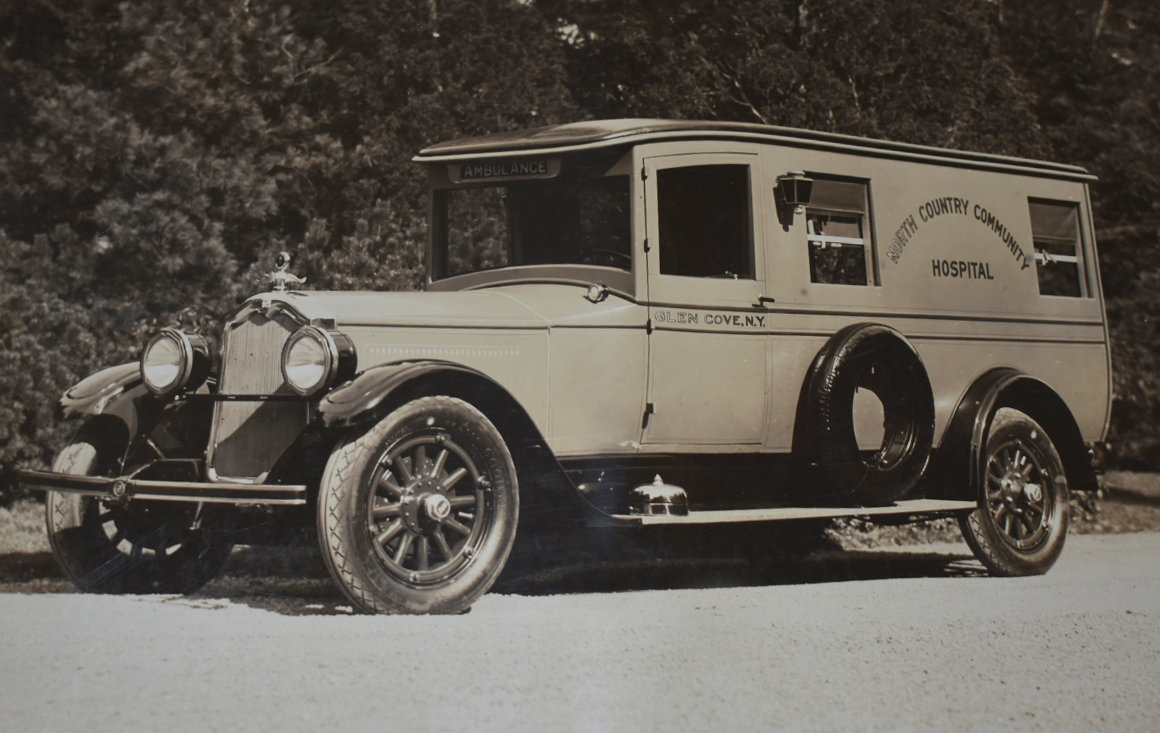 In the mid 1920s, Glen Cove Hospital utilized ambulances like this one for transport.
Courtesy North Shore Historical Museum
Previous Next
By Laura Lane

Pediatrician Dr. John Sheehy’s earliest memories of Glen Cove Hospital, apart from his parents working there as physicians, includes rabbit hunting.
“My older brother and I went to what is now the doctor’s parking lot and chased the bunnies around. It was a big field at the time,” Sheehy said. “Sometimes we’d catch one and want to take it home. But Mom never thought that was a good idea.”
But Sheehy’s connection with the hospital, now marking its centennial, goes further back than he can recall. He was born there 73 years ago as were eight of his siblings.
Sheehy began practicing at Glen Cove Hospital in 1978. His sister Eileen followed the family tradition as a pediatrician there four years later.
“When I began working at the hospital, I already knew many of my parent’s friends who would say hello. And it seemed like everyone knew everyone at Glen Cove Hospital,” he said. “There was a lot of camaraderie there. And people who worked there often lived in the community and they stayed working at Glen Cove Hospital for 20 years.”


Kerri Scanlon, the executive director at the hospital, said the feeling of community is what sets Glen Cove Hospital apart from other hospitals.
“What makes Glen Cove Hospital so special is definitely the people,” Scanlon said. “The staff and physicians have such a collaborative professional relationship. There is no hierarchy. People work together. There is a real community feeling here that creates excellence.”
Amy Driscoll, the director of North Shore Historical Museum, said 100 years ago, it was the hospital that was the final milestone ensuring that the City of Glen Cove would become a year-round community.
The Morgans, Pratts and other leaders in industry made Glen Cove their home, building sprawling mansions during the early 20th century. Banks, a railroad company and mail service followed but not having a hospital was problematic, which became painfully apparent during the influenza epidemic in 1919.
“Locust Valley Library became an infirmary and our museum quarantined Glen Cove pregnant women to keep them safe,” Driscoll said. “That’s when everyone realized this wasn’t working.”
It was the affluent leaders in industry, including the Pratt family, and Henry Davidson, an American banker and philanthropist, who donated large sums of money to have a hospital built.
The city’s first healthcare facility, Glen Cove Community Hospital opened its doors in 1922 as a small three story 19-bed facility on Glen Street. The hospital soon outgrew itself and was moved to a new building on Saint Andrews Lane, where it is today.
The hospital’s name was changed several times over the years beginning in 1925, when it was called the North Country Community Hospital. In 1956 it was renamed Community Hospital at Glen Cove and then North Shore University Hospital at Glen Cove in 1990. In 2015 Glen Cove Hospital joined Northwell Health.
Sheehy’s family have given 186 years of combined service to Glen Cove Hospital when combining his mother, Adelaide Scanlon; father, Tom Sheehy; sister Eileen; and her husband Dr. Carlo Annese’s time as doctors there. All three of Sheehy’s daughters were born at the hospital as were his parent’s 23 grandchildren.
“A lot of the staff I work with today I took care of their children, or my mother did,” John Sheehy said. “There’s always been a family sense at Glen Cove Hospital.”
U.S. Rep. Tom Suozzi was born at Glen Cove Hospital, as were his brothers and sisters. His mother, Marguerite, was an operating room nurse there in the 1940s and 1950. His father, Joseph, was a member of the hospital board. Suozzi’s three children were also born in Glen Cove Hospital.
“We have all been to the emergency room for stitches, breaks, and high fevers, as well as to visit loved ones who are sick, or to pay our last respects to our closest friends and family,” Suozzi said. “(Glen Cove Hospital) is woven into the very fabric of our lives.”
The hospital has grown. Today, it’s a full-service community hospital recognized for its acute rehabilitation programs, head and neck surgery capabilities and women’s surgical care.
“The hospital is in great shape and in the black for the first time in over 10 years,” Scanlon said. “We opened a new rehabilitation center in October, have 50 new physicians and opened another medicine multi-specialty center in the community. We are in a true growth pattern.” Scanlon has been at the hospital for three years and has served the Northwell hospital system for 28 years. She said from the beginning she was impressed by Glen Cove Hospital.
“There was an 83-year-old man who was a Pulitzer Prize pianist who had Parkinson’s disease,” she said. “In three weeks after being treated at our hospital he was giving a concert to the entire community. I’m used to successful liver and heart transplants but there is nothing more important than for a patient to get back something meaningful to them. I knew I was in the right place.”
Report an inappropriate comment