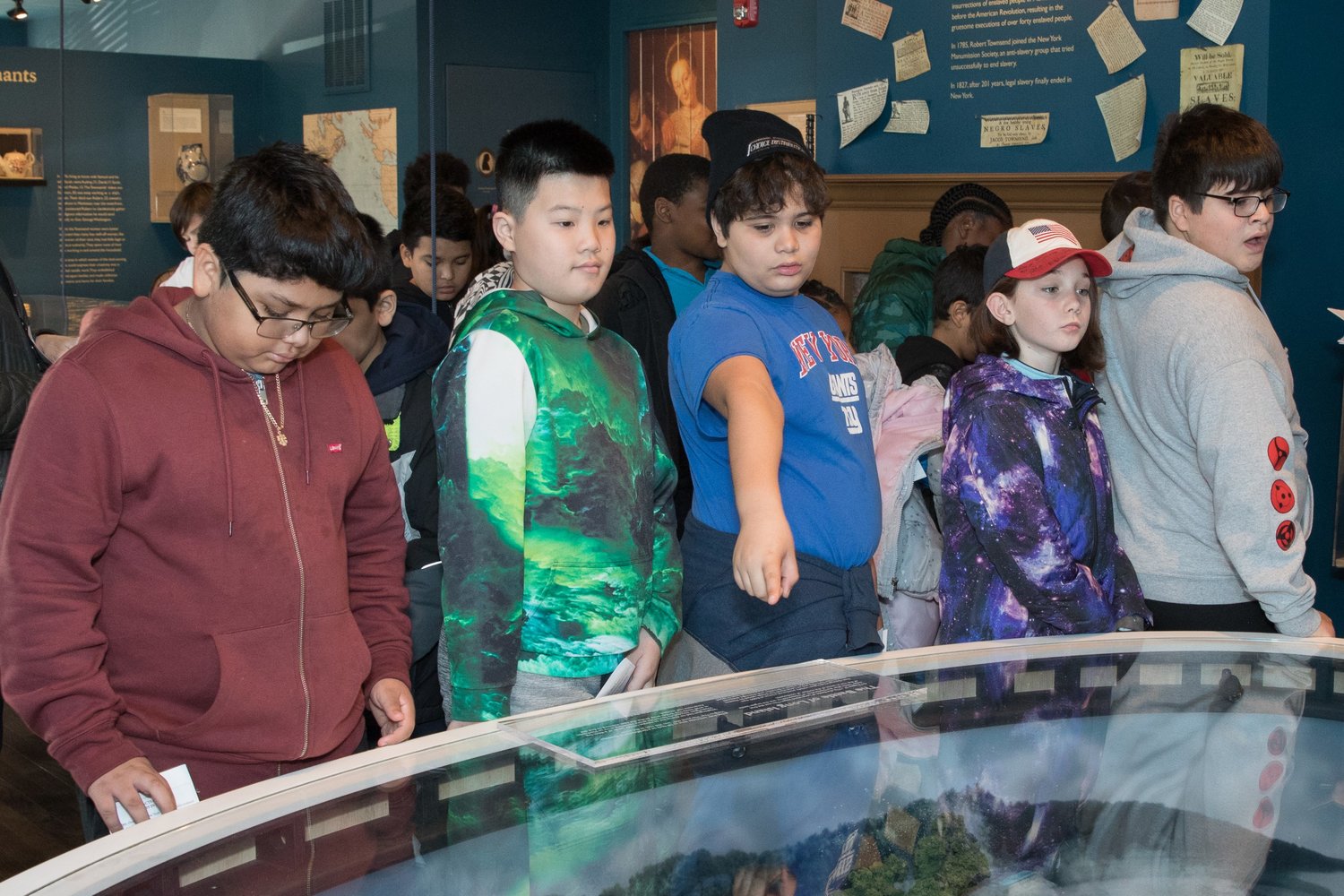 Students from the Maplewood Elementary School, in Huntington Station, visited the Raynham Hall Museum Education Center in December, and saw dioramas depicting Oyster Bay in 1780. The fourth-grade classes from the Oyster Bay-East Norwich School District will take a trip there in April.
Courtesy Ann Balderston Glynn
By Laura Lane

Long Island is rich with opportunities to experience our country’s history, with its many museums and landmarks. The hamlet of Oyster Bay boasts one of the most important repositories of that history, Raynham Hall Museum.

Samuel Townsend, a ship-owning merchant and a member of one of Long Island’s founding families, purchased property in Oyster Bay in 1740, built a home and named it Raynham Hall. He went on to help plan the American Revolution, and that spirit appears to have run in the family.

His son, Robert, became a member of George Washington’s Culper Spy Ring, and was integral in the Patriots’ planning and execution of the war. Robert’s communications with Gen. George Washington — written in code using invisible ink — were instrumental in America’s defeat of the British.

Townsend obtained invaluable information during a six-month occupation of Raynham Hall by the British Queen’s Rangers from 1778 to 1779. Townsend’s home served as headquarters for the regiment of British troops.

Recognizing the value of the house museum’s history, fourth-grade teachers from the Oyster Bay-East Norwich School District’s James H. Vernon School have brought their students to the museum for the past 25 years, as part of their American Revolution unit. During the coronavirus pandemic, students visited virtually, but now they have returned in person.

The experience is a highlight of the fourth-graders’ school year, Vernon Principal Valerie Vacchio said. They learn about the role Raynham played during the war, and what it was like to live in the hamlet at the time.

“An important goal of the James H. Vernon School is to ‘build bridges and expand opportunities’ by partnering with local community organizations,” Vacchio explained. “We are fortunate to have the benefit of learning about local history and visiting historical landmarks, such as Raynham Hall, right here in our own backyard.”

The fourth-graders learn about whaling on Long Island, shipbuilding and the Culper Spy Ring. Before they visit the museum, they read “Treason Stops at Oyster Bay,” by Anna Leah Sweetze, a work of historical fiction that details what happened in Oyster Bay during the war, including the Townsends’ experiences.

“And going to the museum allows the students to understand the town they live in,” Sandra Griffin, a fourth-grade teacher, said. “The kids are so animated there.”

There excitement is apparent from the minute they arrive at the house, which many have passed, but never gone inside. The door of the house museum and the floorboards and steps leading to the second floor are original. Students say it’s “cool” to go through the door the British opened and walk on the same floor, Griffin said.

“And the children who don’t like history then become interested in history,” said Brenda Ghicas, another district fourth-grade teacher.

The visit to Raynham is important, Griffin added, because it piques students’ interest in other historical sites. And they often return with their parents, acting as teachers themselves.

“This wonderful facility, right in the heart of our hamlet, brings you back to the 1700s and highlights the stories of resiliency during the Revolutionary War.”

In the winter of 2021, the Education Center, which is included in the fourth- grade trip, opened next to the house museum. It gives visitors an even broader educational experience, featuring 18th-century-style portraits that “come to life.” Visitors use an augmented-reality smartphone app and headsets to see and hear members of the Townsend family, one of their slaves and British Lt. Col. John Graves Simcoe, who led the occupation of the hamlet during the war. The experience, called 1776AR, was created to reinterpret history in a more user-friendly way, to appeal to young people as well as seasoned museumgoers.

In one of the rooms in the center are dioramas depicting Oyster Bay in 1780, as well as the Battle of Brooklyn. A 1½-inch-tall figurine of Simcoe, who was the commanding officer of the Queen’s Rangers, can be seen leaving the hamlet on horseback against a backdrop of houses, and there are everyday scenes like a man chopping wood. And as visitors approach the diorama, the app allows them to see Washington standing atop it, sharing information on Colonial times in the hamlet.

The center isn’t the only place where history “speaks” to visitors. When they enter the house, Samuel and Robert Townsend appear and can be heard. The fourth-graders are fascinated when they watch and listen to people from long ago sharing their experiences and their hopes for the future, the teachers say, Whether it’s Washington holding forth on the importance of apples during Colonial times, or Robert Townsend reminding visitors to be quiet inside the house so that Simcoe won’t hear them, the experience is unique and fun.

“There’s nothing quite like learning about history where it actually happened,” Harriet Gerard Clark, the museum’s executive director, said. “When children visit Raynham Hall and see the dioramas of the battlefields and landscapes, along with our augmented-reality experience, it helps bring complex stories to life.”

Arlene Pastore, who began volunteering at Raynham Hall a decade ago, is now the museum’s educator. Having conducted more tours for fourth-graders than she can count, she said they bring history alive for the children.

“My favorite character is Solomon (Townsend),” Pastore said. “He was a cabin boy as a teenager, and then became the captain of his father’s ship. Children hear stories like his and understand how people made sacrifices to live the way they thought was valuable.”

There is now proof, through letters, that Maj. John Andre, a British spy, stayed at Raynham in 1779. He was captured a year later and executed for his involvement in the Benedict Arnold treason plot.

“When the kids hear a story like that, they realize there are historical documents still yet to be found,” Pastore said.

“Towns across Long Island, including Oyster Bay, were once under armed occupation by a hostile force for almost seven whole years,” Gerard Clark said. “It seems strange to us now to think that the British were once enemies, and that New York City and its surrounding areas were at the epicenter of national upheaval.”