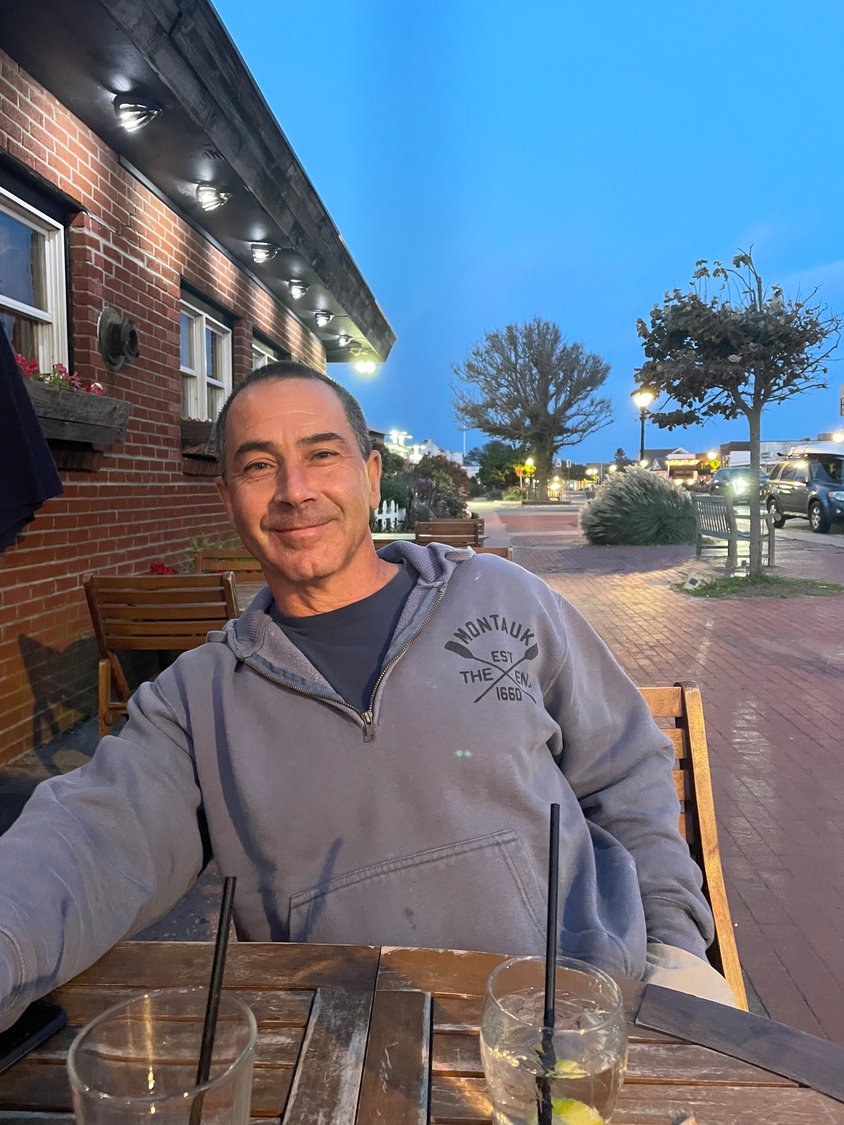 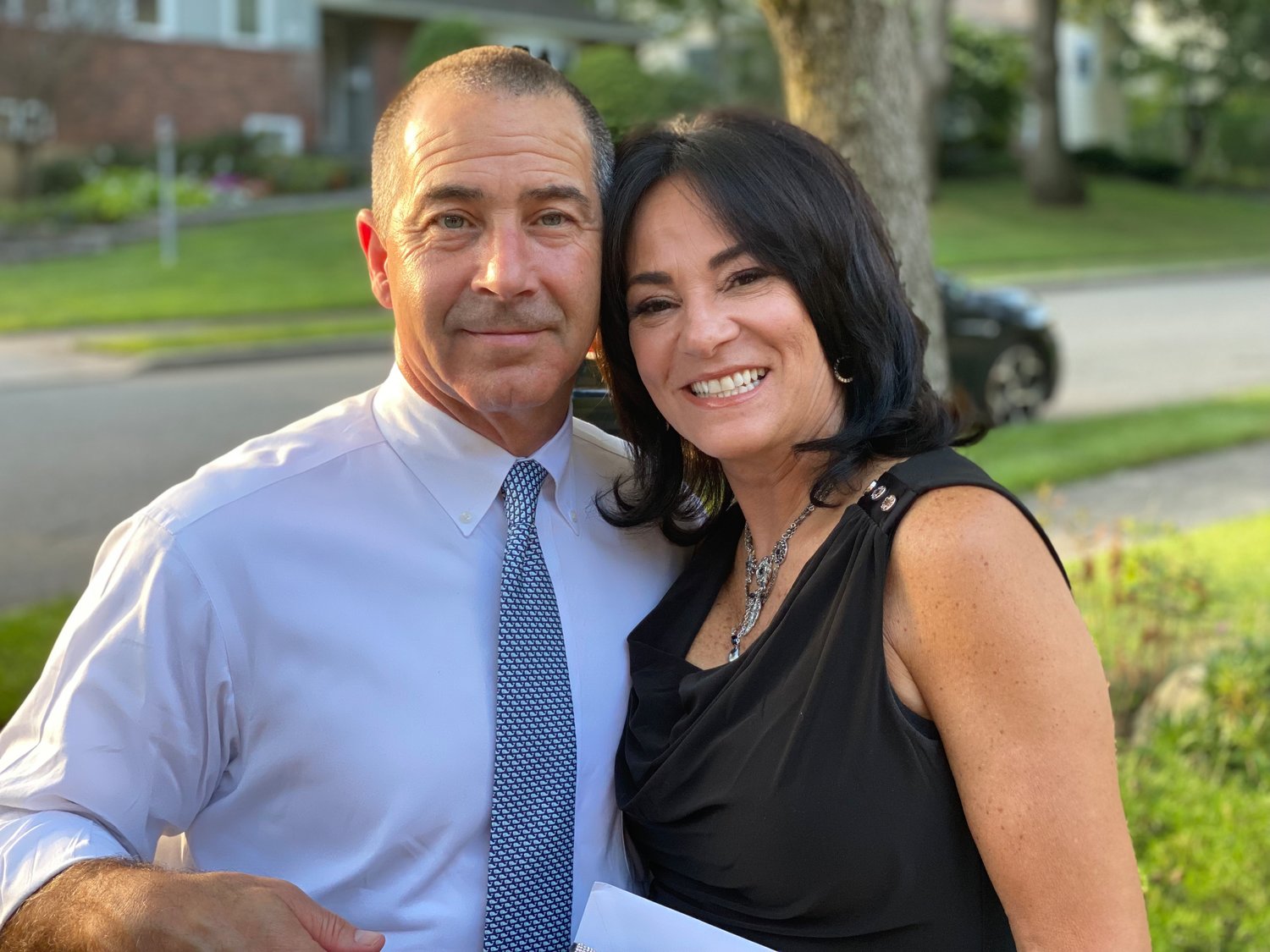 Rob Brusca shares his passion for Oyster Bay with his girlfriend, Giovanna Bizzoso, who also grew up here. They can often be found volunteering in the community together.
Courtesy Rob Brusca
Previous Next

He gives up so much of his time for the community. Rob’s got a big heart.”
Richard LaMarca, town clerk
By Laura Lane

Robert Brusca has always given everything to his community. Often called the “unofficial and unpaid mayor” or “Mr. Oyster Bay,” the lifelong East Norwich resident can always be found volunteering at one event or another, where he will tell anyone who will listen how great it is to live in Oyster Bay, and why.

Whether he’s thanking Town Council members for their hard work at a meeting, sweeping up after the holiday market, or encouraging participation in a Chamber of Commerce event to help promote small businesses, Brusca is an overwhelmingly positive, universally appreciated force in the community.

For all he does, the Herald is proud to name him its 2022 Person of the Year.

“Rob gives so much to the community he grew up in and continues to live in,” said Richard LaMarca, the town clerk and a friend since childhood. “And he was always a leader, even back in school.”

Brusca’s parents, Rose and Louis, moved to East Norwich in 1962. Rob, the oldest of three, has a sister, Laura McConnell, and a brother, Richard.

He made his mark early on. He was class president at Oyster Bay High School and a star athlete. “Rob was the captain of our championship football team when we tied with Valley Stream North — which is a big school — as co-champions in 1981,” LaMarca recounted. “He always encouraged everyone, and still does.”

Brusca was inducted into the OBHS Hall of Fame in 2010. His football coach, now his friend, Butch Garrison, described him as “a good guy who is fair and honest with everybody.”

“When he moved up to varsity, his father was worried that because he was small, he’d get hurt,” Garrison recalled. “He was our middle linebacker. They all tried to run at the little guy, but he was one hell of a football player.”

Brusca, now 58, said he loved attending all the schools in the Oyster Bay-East Norwich Central School District. And what he finds magical is that the district has maintained the small-town feel that he’s always loved.

Brusca is an attorney with his own practice in the hamlet, where he focuses on real estate and wills and estates. His first job as a lawyer was at LaMarca’s father’s firm, Marino, Bernstein and LaMarca.

“Those three guys were fantastic role models,” he recalled. “They were all my friends’ parents, and then they became my boss.”

Anthony LaMarca, the firm’s only surviving partner, had known Brusca for years because of his friendship with his son. “Rob was the same practicing law as he is as a person,” the senior LaMarca said. “He’s a nice fella, and was a good employee. He had integrity, and a willingness to help with anything. He’s just a super guy.”

Brusca brings his talents as a volunteer to the boards of many local nonprofits. He has sat on the board of the Oyster Bay Railroad Museum since 2009. Bill Burke, of East Norwich, who oversees education at the museum, attributes his involvement to Brusca. Burke had been on the board of the Oyster Bay Main Street Association, where he was unable to use his talent as a former educator. Brusca opened the door for him to get involved at the museum.

“I wanted to have an impact to develop an education program, and he helped me so I could get it started at the museum,” Burke said. “The Railroad Museum’s building is owned by the town. Rob’s connections with the town keep the relationship working.”

Brusca said he knew little about trains before he got involved at the museum. “The only thing I knew as a kid was my brother had a great model train setup, and my dad took the (Long Island Rail Road) at Syosset,” he said with a chuckle. “But I was asked to get involved. I saw the museum as a community benefit.”

Ann Balderson-Glynn, who is also on the museum board, said that Brusca’s legal expertise is a gift. “Rob is a go-getter, and he keeps things going,” Balderson-Glynn said. “He makes connections with people out of the goodness of his heart, and is someone who brings people together for the greater good. And he’s not only smart and helpful but is also a very thoughtful person. Rob is just kind.”

Brusca is also a member of the board of the Oyster Bay-East Norwich Chamber of Commerce. Ravin Chetram, its vice president, described Brusca as a fixture in town whom board members ask for advice.

Rich LaMarca noted Brusca’s generosity, and said that at this year’s holiday market, he paid for the hot chocolate and went around offering it to people. “He gives up so much of his time for the community,” LaMarca said. “Rob’s got a big heart.”

Brusca serves as counsel for the Oyster Bay Civic Association, and is also on the advisory board of the Main Street Association. Meredith Maus, the association’s executive director, has known him for 10 years.

“You don’t get things done in this downtown by yourself,” Maus said. “Rob arranges for the meetings and helps coordinate projects. He’s always a part of everything that gets done, and plays a big role in everything we do.”

Brusca said he first got involved in the community 15 years ago, when he joined a committee to stop a project to build apartments that AvalonBay Communities was planning. The developer was proposing 300 apartments four or five stories high on Pine Hollow Road. No one supported it, Brusca said, because it would have altered the community negatively.

“After six months, AvalonBay withdrew their application, and that was big,” he said. “From then on, I started to become involved in the community.”

One of his biggest accomplishments was unifying all of the local nonprofits and civic organizations. “During the last 15 to 16 years, representatives of nearly every organization have become friendly, and they cooperate with each other,” Brusca said. “If there’s something of a common concern, like garbage in the downtown, the groups seek to inform each other, talk about it and try to come up with a unified position, and then address it.”

He doesn’t consider himself to be any different than others who volunteer. He usually underplays his involvement in the community, and is always quick to give others credit for their work.

Although he admits that he likes to have the last word, Brusca believes that if it’s beneficial, that’s OK. “I can be a little louder or more of a nudge then others, but if that has to be, I’m happy to do that,” he said.

“I grew up here, live here and I’ll probably have my last meal here.”