Six-year-old oyster gardening program seeks to save the Sound 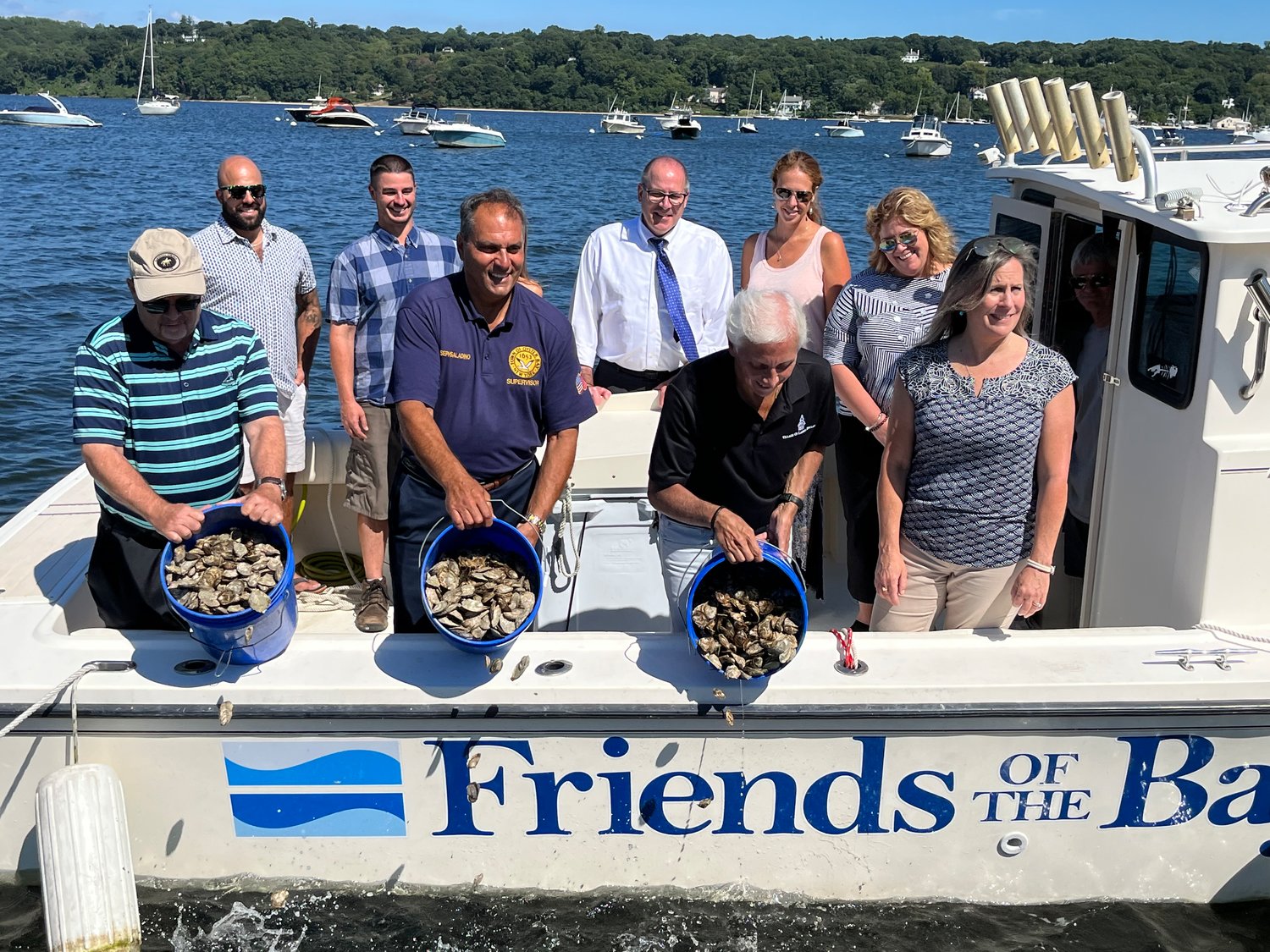 Public officials and oyster gardening program volunteers gathered on the Friends of the Bay’s boat to clean and measure the oysters one final time.
Will Sheeline/Herald
By Will Sheeline

Community members, volunteers, scientists and public officials gathered by the Laurel Hollow docks on Wednesday to celebrate the success of the North Shore Oyster Gardening program. Hundreds of thousands of oysters have been seeded in local harbors in the six years since the program began, helping to clean the water and improve the quality of marine life.
The program, run by the Oyster Bay/Cold Spring Harbor Protection Committee, started in 2017. The committee is a partnership among the nine villages within the local watershed, as well as Oyster Bay and Nassau County, whose goal is to protect and improve water quality in the area.
The program is an extension of that goal, because oysters are famously efficient natural filters of up to 50 gallons of water a day, stabilizing nitrogen levels in the Long Island Sound. And because they form large clusters, oysters also provide natural habitats for many other types of marine life in the Sound.
Barry Udelson, a marine ecology and aquaculture specialist with the Cornell Cooperative Extension of Suffolk County, has worked with the program since it began. On Wednesday he explained to the gathering the importance of reintroducing the bivalve mollusks to the ecosystem.
“The big thing about this program is that we’re not fighting against Mother Nature,” Udelson said. “The more of these programs that exist, where we’re putting oysters and clams back into the harbors, the more we’re helping to boost the natural population.”


Thanks to the oyster gardening program, roughly 500,000 oysters have been planted in four community gardens, each encompassing dozens of smaller gardens, since 2017: at West Harbor Beach, in Bayville; Beekman Beach, in Oyster Bay; Laurel Hollow Dock, in Laurel Hollow; and Eagle Dock, in Cold Spring Harbor. The West Harbor Beach and Laurel Hollow Dock gardens have single set, or partially matured, oysters, while the other two grow oyster larvae on shells.
The gardens are tended by more than 100 area volunteers — everyone from Boy and Girl Scouts to Oyster Bay and Cold Spring Harbor High School students, to members of local organizations like the Cold Spring Harbor Beach Club and the Lloyd Harbor Bath Club.
Rob Crafa, coordinator of the Oyster Bay/Cold Spring Harbor Protection Committee, highlighted the efforts of the volunteers and everyone who worked to make the program a success. “Aside from the oysters, the real star of the show is the community,” Crafa said. “The residents and the volunteers really do give up their time and their treasure to sponsor a cage and to get involved in the work that it takes to maintain it.”
Twice a week from June through September, volunteers head out to the moorings and their assigned oyster gardens, to clean and measure the oysters. They also help construct the cages in which the oysters are held in April and May.
Several elected officials spoke at the news conference, commending the work done by the protection committee, as well as Heather Johnson, executive director of Friends of the Bay. The mayors of Laurel Hollow and Oyster Bay Cove emphasized how important and popular the program was in their communities.
“Quite frankly, I had to get my arm twisted to start this, because I thought, who’s going to want to get in the water, get dirty, clean cages, that kind of thing?” Laurel Hollow Mayor Daniel DeVita said. “The response was overwhelming.”
“The people love it,” added Charles Goulding, the mayor of Oyster Bay Cove. “Not everything I do in the village is popular. That one is very popular.”
Town of Oyster Bay Supervisor Joseph Saladino reminded the gathering that in many ways, it’s the area’s harbors and natural beauty that make living on the North Shore so special.
“This bay is one of the finest resources anywhere in America,” Saladino said. “When people like Billy Joel could live anywhere and they choose Oyster Bay to live, well, doesn’t that speak for itself?”
Report an inappropriate comment