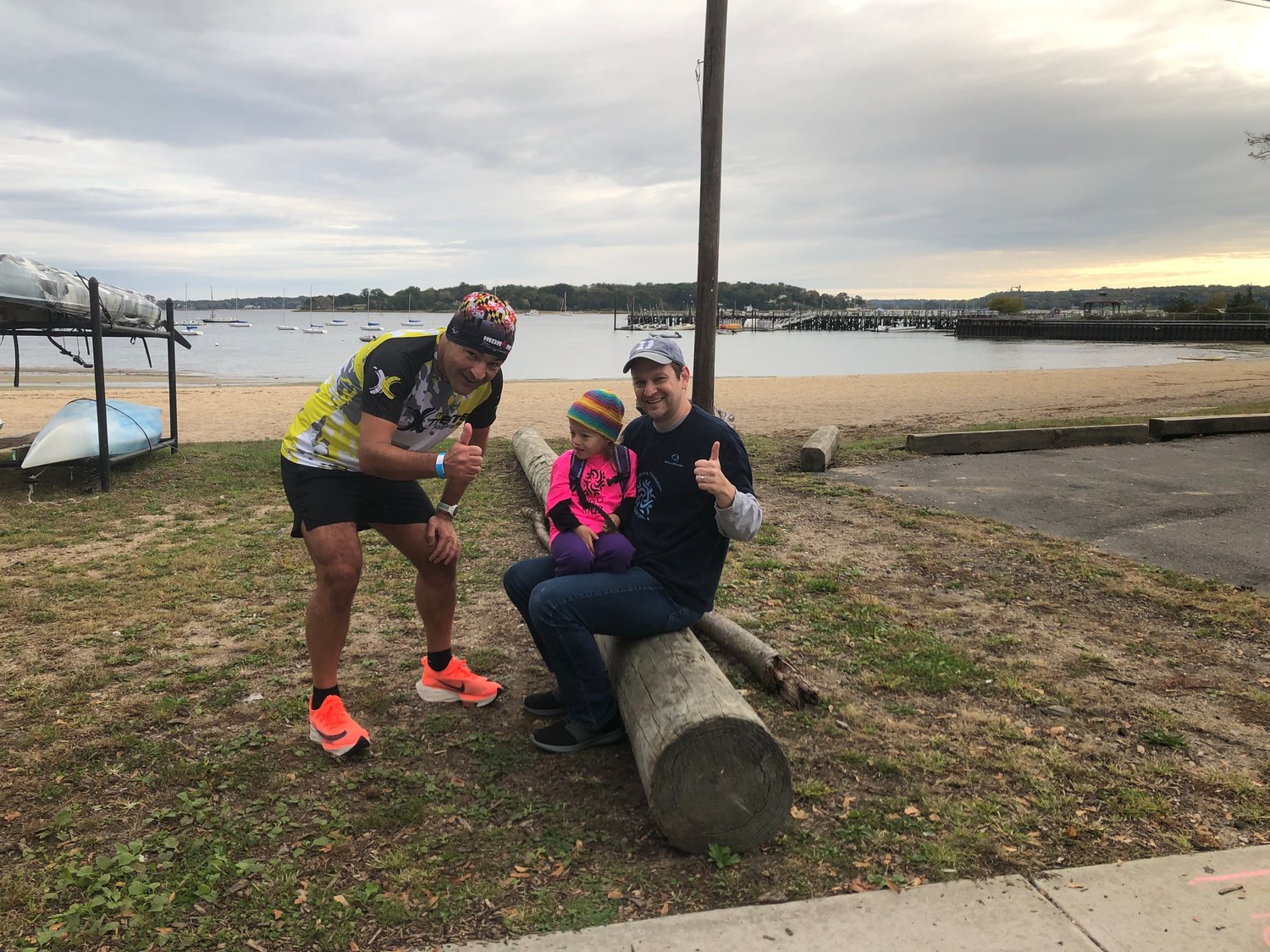 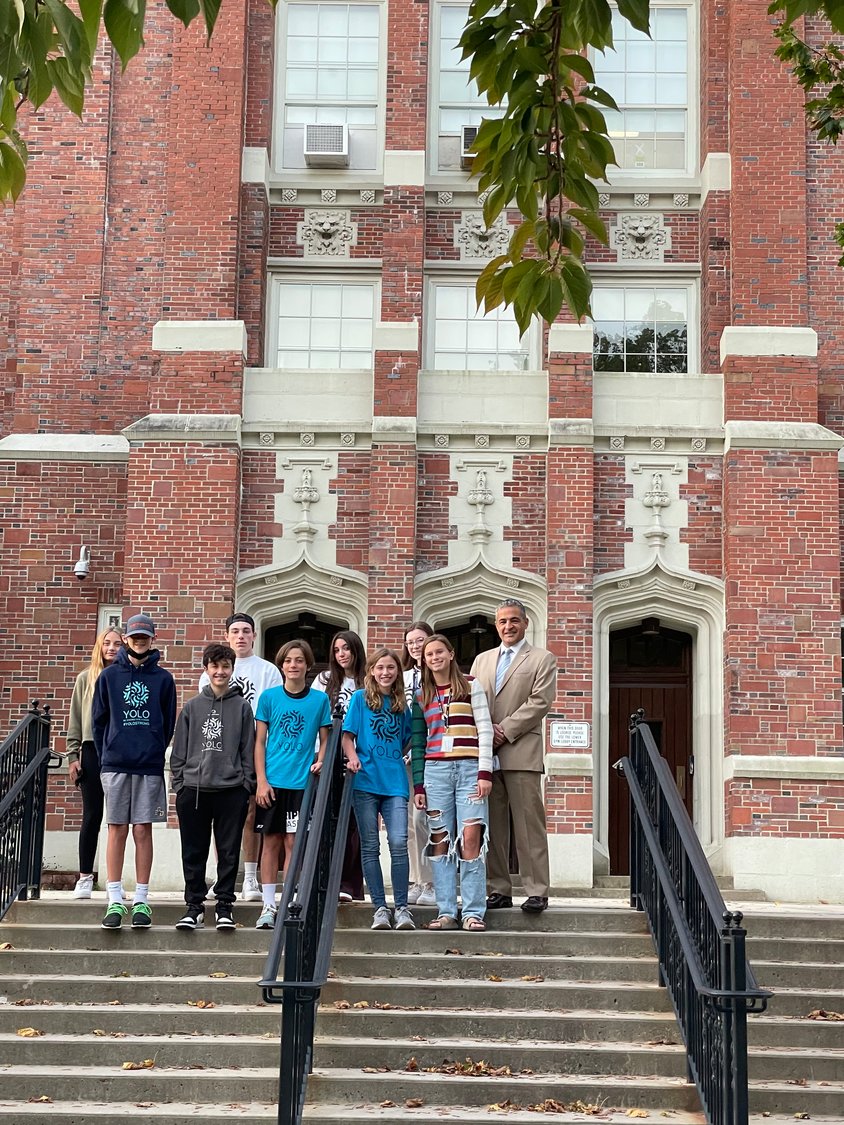 “Ianni’s Incredibles,” made up of students from the Oyster Bay-East Norwich School District, participated with Superintendent Francesco Ianni in YOLO’s event.
Courtesy OBCSD
Previous Next
By Laura Lane

Ruth Elizabeth Davis, now 5, was a premature baby, weighing one pound, 12 ounces at birth. As a result, she suffers from a cardio pulmonary condition requiring her to wear oxygen. Among her limitations is an inability to travel by plane.

The YOLO Strong Foundation, an Oyster Bay nonprofit which works to help medically fragile children, has changed the Oyster Bay little girl’s life. Her parents, Ashlan Reid and Martin Davis, both scientists working at Cold Spring Harbor Laboratories, are originally from Arkansas. When YOLO gave the family a travel trailer for Ruth’s medical equipment, which is extensive, her family was able to travel to Arkansas to visit relatives, most of whom Ruth had never met.

“YOLO allowed for Ruthie to meet her great, great grandpa for the first time, and she got to see her cousins, aunts and uncles too,” said Reid, adding that the trailer ended up providing her daughter with something unexpected as well. “During Covid, we put it in our backyard so Ruthie could pretend she was going away. She could experience an adventure this way without exposure to Covid.”

Reid is a friend of Cheryl Lordi and Danielle Taylor, who co-founded the YOLO Strong Foundation in 2012 with Jeannine Delpozzo. They reached out to Reid to ask how they could help after she gave birth to Ruth. Reid said she had no idea how expensive Ruth’s care would be during her first five years  or how emotionally difficult it would be. She is grateful for YOLO.

“The positivity coming from this group is so meaningful,” Reid said. “And beyond the financial support, they are fun people to gain energy from.”

The nonprofit raises money through annual activities, like races, which in the past have included obstacle courses. This year because of Covid, the 13 teams that participated ran or walked a 4 x 4 x 24, which requires one to complete 4 miles every 4 hours for 24 hours. Usually, the participants are women but this year everyone became involved.

Two children’s teams formed and two teams had families running together. Even Superintendent Francesco Ianni, from the Oyster Bay-East Norwich School District, formed a team with his students.

There were 120 teams that participated on the weekend of Oct. 22, with members from Bayville, Oyster Bay, Mineola and Syosset.

A group of more seasoned runners ran the entire 24 miles with others running as many legs as they could. Some teams broke up the legs among its members.

To fundraise, each team shared their donation link with friends. Local businesses also signed up for sponsorships, Taylor said. All of the money raised — $40,000 — went to benefit children who are medically fragile.

“Ianni’s Incredibles” was comprised of 10 students, along with the superintendent, who is training for the Nov. 21 Philadelphia marathon.

“I lost my mother when I was 28 to breast cancer,” he said.  So, I support children and families that have someone undergoing chemotherapy. It’s important to me. This event is a fantastic way to do something along with my students knowing we can help someone in our community.”

Each student took one leg of the four miles during the 24 hour event. Ianni took the early shift, running at 7 a.m. and did 10 miles. Then he returned in the afternoon and evening to participate again.

“One of the nice things about a school community is I’m very connected to the events,” he said. “The students don’t look at me as the superintendent sitting in an ivory tower.”

Nicole Walsh, who was on Ianni’s team, had participated in YOLO when she was 12, a finisher in the “mud run,” which was a YOLO obstacle course event.

“This time I was just running but there was a nice crowd, a lot of people there,” the Oyster Bay High School ninth grader said. “I didn’t know what to expect until I got there. I never did a race with multiple legs before.”

Nicole, of Oyster Bay, typically runs cross country, but said she likes to find races that are for good causes. “In cross country everyone is really competitive,” she said. “It’s such a nice mentality running for YOLO. Everyone cheers you on.”

As for Ruth, meeting Ianni was an event in itself. “We were Dr. Ianni’s cheering team and it was exciting for Ruthie,” Reid said. “She was in awe of him and got to be in a picture with him.”

Ruth might be seeing Ianni again. Having received the Covid vaccine on Monday, Reid said, her daughter may be able to attend kindergarten in person very soon.