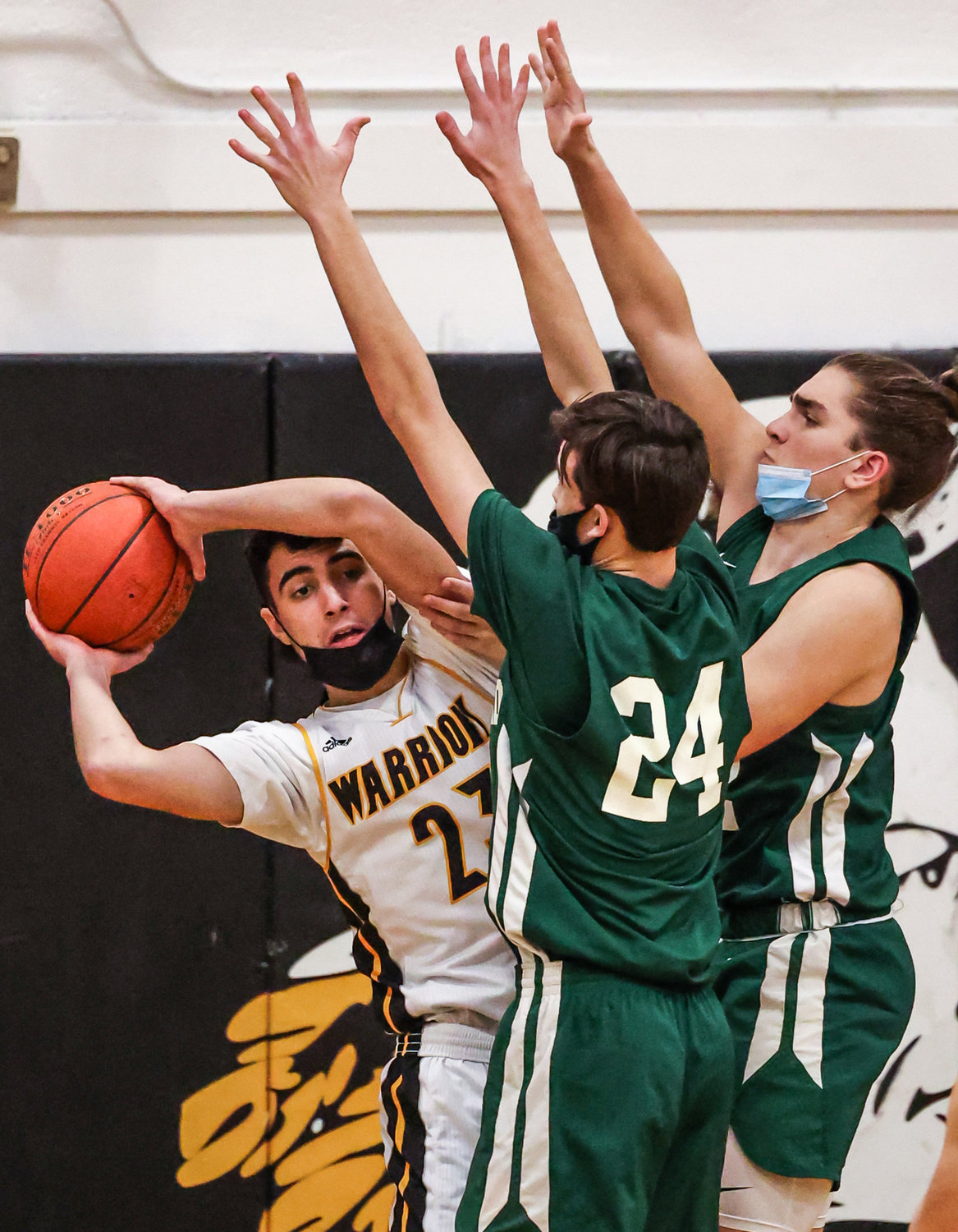 After its 14-point, second-half lead at Wantagh slowly disappeared Jan. 19 and was down to one with just under six minutes remaining in regulation, longtime Seaford head coach Ralph Rossetti chose to let the Vikings work through the difficult stretch.
“I was probably one possession away from calling timeout,” Rossetti said. “It wasn’t like we were getting bad looks or not defending. Wantagh made a strong comeback, but I’m not one to panic. I wanted to see the kids play through it and they did.”
Seaford answered a 13-point run by the Warriors with 16 consecutive points in the fourth quarter on the way to a 49-37 victory in the first of two meetings in a 4-day span between the neighboring Nassau Conference A-5 boys’ basketball rivals. Wantagh turned the tide in the rematch last Saturday, winning a 43-42 come-from-behind nailbiter on the road behind junior Jakai Lester’s 17 points and junior Joe Martin’s last-minute basket.
“Evan [Block], Jack [Murphy] and Chris [Navin] are all three-year starters and we have many other kids who contribute a lot,” Rossetti said. “It’s a great group of kids and they’re playing with confidence. They do a nice job of sharing the ball and that’s something we work on every day in practice.”
In the first meeting, Navin (game-high 14 points) hit a clutch three-pointer with 5:15 left to up Seaford’s lead to 36-32. He followed with baskets off feeds from Murphy and junior Tom Harrington to help it regain breathing room. Murphy had 7 of his 12 points during the decisive outburst. “Murphy’s defensive energy got us going again,” Rossetti said.


Sophomore Charlie DeStefano led the Warriors with 8 points. Senior Thomas Campisi and junior Ryan Daly added 6 apiece.
“We’re a young team and a work in progress,” Wantagh first-year head coach Matt Simeone said. “A bunch of these guys didn’t play last season, but they’re batting every night. We didn’t do a lot of things well, especially in the first half, yet we were right in the game late in the fourth quarter.”
Wantagh (3-7 overall; 1-4 in A-5) trailed 33-19 midway through the third when Campisi sparked its rally with a trey. Five different Warriors scored during the stretch that brought it within 33-32 and had Rossetti on the verge of pausing the action.
Block (12 points) and sophomore Devin O’Donnell (9) dominated the boards for Seaford (6-4 overall, 4-3 in A-5), which led after each quarter in the opener. “Evan sees the floor better than any kid I’ve ever coached,” Rossetti said of Block, who scored in double figures in all but one of the first 10 games and averages 17 points. “He’s a good-sized forward who handles the ball like a point guard and plays fast.”
In last Saturday’s rematch, Wantagh trailed 38-33 entering the fourth quarter and held the Vikings to just four points.
“The boys worked hard to get back into the game after playing from behind for most of it,” Simeone said. “I’m really proud of how well they played today.”