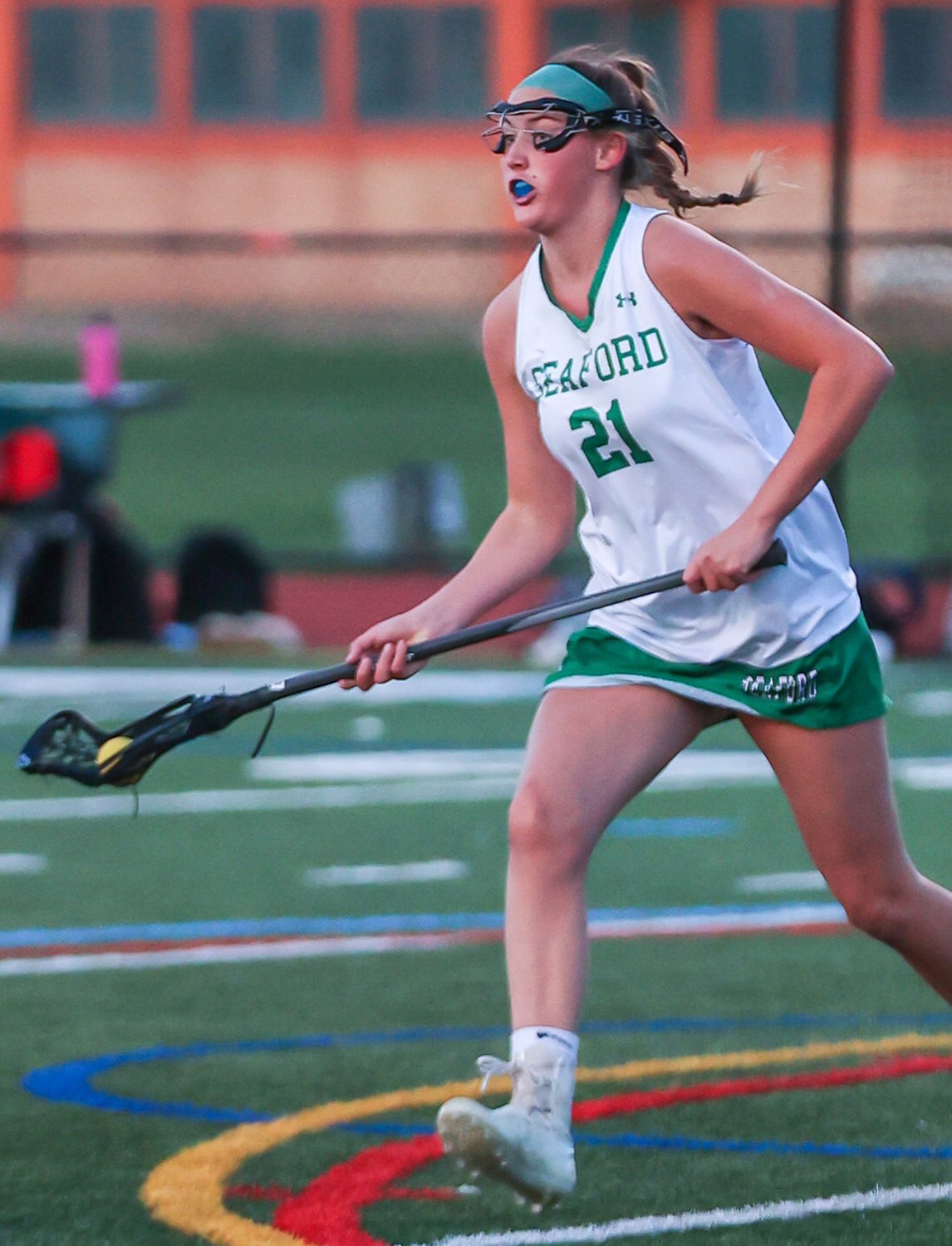 The Seaford girls’ lacrosse program took another step toward building a winning culture this spring.
The Vikings went unbeaten in Conference II to claim the league title a season removed from going 8-6 with several close losses. This year, Seaford seized control in the close games en route to a 10-0 conference record and competed strongly in non-league games against Conference I opponents.
“We had a strong senior crew and this was their year to show off what they have been doing the past couple of years and I’m really proud they were able to accomplish that,” said third-year Seaford coach Jenna Davis. “Moving forward I think we have cemented that this is a strong program and we earned our place among the top teams.”
Seaford carried over the momentum from a dominating regular season where it went 13-3 overall into the playoffs with a 16-10 first-round win against Division on May 17 powered largely by four goals and two assists from freshman Jess Grzelaczyk. Senior attacker Alex Leggio also had a big day with three goals in three assists to help the Vikings seize control in the second half after the score was tied 5-5 at halftime.
The Vikings’ postseason run came to an end last Saturday with a 16-8 loss to third-seeded North Shore in the Class C quarterfinals. The game began Friday and was suspended due to rain with the score tied 7-7 and 24:13 remaining in the second half.  Grzelaczyk led Seaford with four goals, but the Vikings were limited to just one tally in the second half after the score was tied at halftime.


The season-ending defeat brought an end to the heralded career of Leggio, A reigning All-County player who led Nassau County in assists with 54. She will play college women’s lacrosse next year at Adelphi.
Seniors Emily Montagano and Emily Montagano also had big offensive seasons along with junior Dylan Lee and Grzelaczyk. Ettinger, a two-way midfielder, has committed to play college lacrosse at Binghamton.
The Seaford defense also stood tall this season holding opponents to 10 or less goals in 11 games led by Emma Williamson, Daniella Stek, Ashley Tuohy along with twin sisters Brooke and Parker Surace. Senior goalie Maddy Catalanotti finished her high school career with a big final season and recorded nine saves in the North Shore loss.
“They are a very skilled group,” said Davis of her defensive unit. “They are competitors and are aggressive and played very tough against the strong teams.”
The Vikings went toe-to-toe in some tough non-league games against Conference I teams, which included a hard-fought 15-12 loss to Massapequa on April 21, which Davis hopes sets a tone going forward for competing among the county’s elite programs in the coming years.
“You learn a lot playing the better teams,” Davis said. “We gained some confidence in those games and know we can hang with them so anything is possible.”