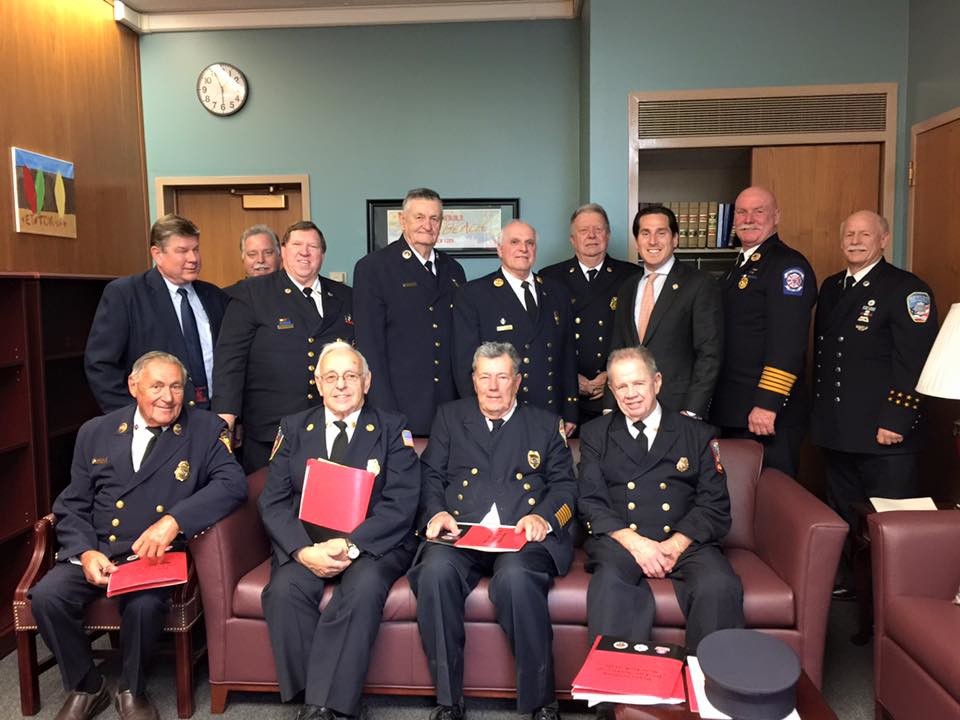 A new law to be enacted at the start of 2019 will help cover the healthcare costs of volunteer firefighters who have contracted cancer in the line of duty. The law called the “New York State Volunteer Firefighter Gap Coverage Cancer Disability Benefits Act,” was co-sponsored by state senator Todd Kaminsky and signed into law by Governor Andrew Cuomo on Oct. 22.

Under the act, volunteer firefighters who assist in putting out fires inside buildings, or “interior firefighters,” would be eligible for a lump sum payment of either $6,250 or $25,000, or up to 36 months of disability payments of $1,500, depending on the firefighter’s prognosis.

Steven Klein, a former Oceanside fire chief, now the vice president of the Firemen’s Association of the State of New York, said that the new law would be a way to ensure that volunteer firefighters have the similar coverage to career firefighters.

“There is a sacred trust between our volunteers and their communities,” Senator Todd Kaminsky said in a statment, “since they are always there at a moment’s notice for the public, the public will be there for them should they get sick in the course of their service. This bill is the fulfillment of that trust, and it’s been a long time coming.”

Both Klein and Kaminsky have suggested that the benefits would likely be paid for under the insurance plans that individual fire districts or counsels purchase, and that the bill gives insurers until 2019 to integrate this coverage into their plans.

The act does not specify how departments should integrate these new coverage requirements, nor does it allocate state funds to assist with potentially higher premiums for insurance plans that integrate them.

Kaminsky’s office said that many decisions related to the policy’s implementation will fall to the state’s Office of Fire Prevention and Control, including details about how firefighters can apply for claims, or whether those diagnosed with cancer prior to 2019 will be able to retroactively do so.

“We’ve had quite a few members that have battled or are battling cancer.” Oceanside Fire Chief Kevin Klein, and Steven’s son, said. “We’ve lost some guys over the past few years, so I’d say this bill is definitely going to help us protect our volunteers.”

Oceanside Fire District’s Treasurer Kevin Grasing said the district is lacking specific guidance on how to implement the new policy. “It’s new and it’s unknown how we’re going to do it, but we’re looking forward to complying with the law, and looking after our guys.” He added that the insurance industry was already working on plans that integrate the policy’s requirements.

Island Park Fire Chief James Miotto said it is “too early” to say what kind of impact the law would have, though he added that as far as he knew, no one in his department had been diagnosed with cancer related to firefighting.

Klein said that FASNY had been working to get legislation like this passed for about seven years, and that one of the main obstacles had been estimating how much the measure would end up costing. Kaminsky’s office said that it would be difficult to estimate, because gathering health data from each fire department in the state would be challenging. It’s possible that some fire fighters who contract cancer would not necessarily report it as related to their firefighting activities.

Last year, Senator Chuck Schumer sponsored a bill that would create a “National Firefighter Cancer Registry,” which would help public health officials gather data on cancer related to firefighting. The 2016 version of the bill was defeated. A new iteration has passed in the House of Representatives, and is currently stalled in the Senate.