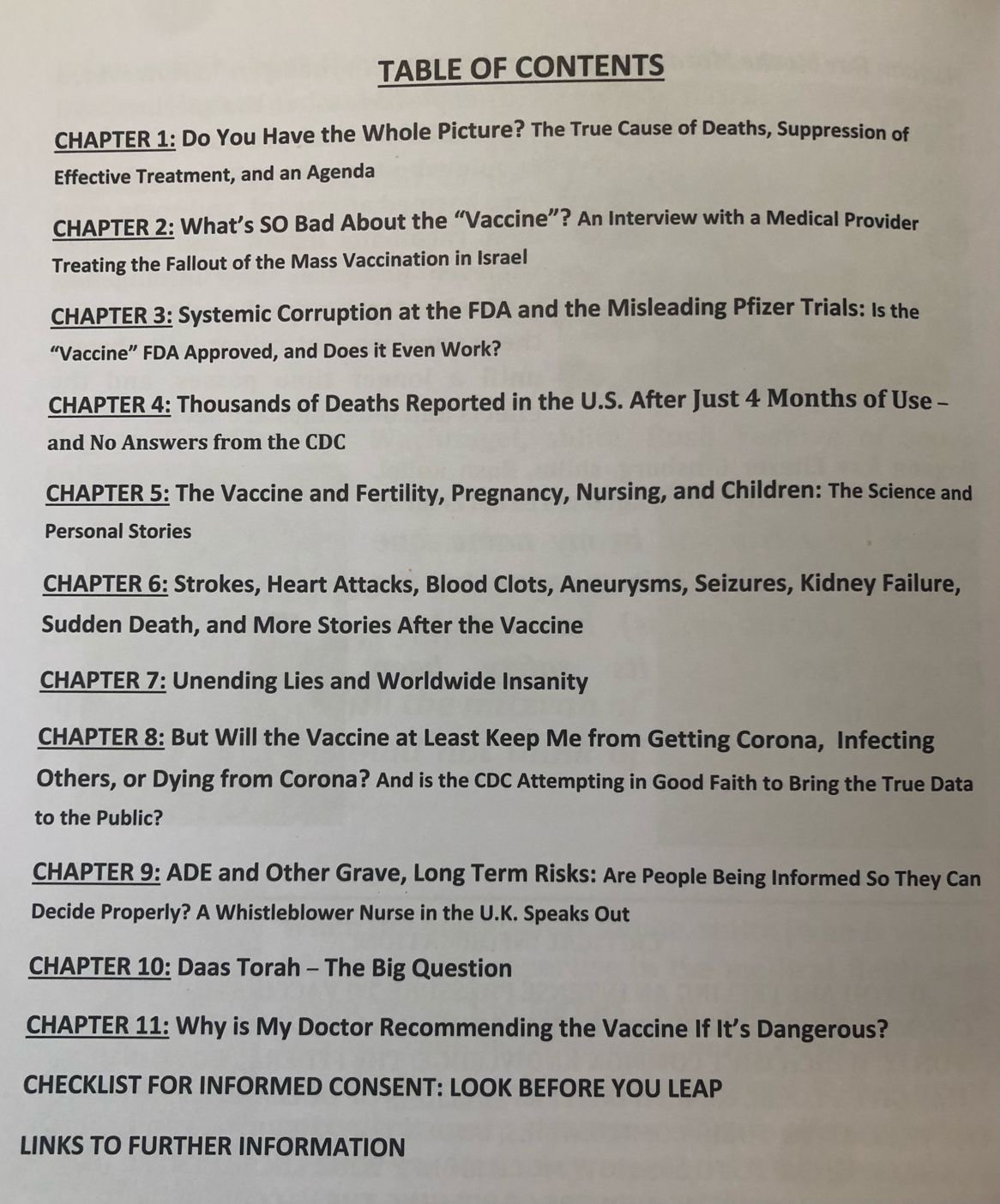 Nearly six months after the first Covid-19 vaccines were administered, inoculation against the virus continues to be controversial, as misinformation and hesitancy remain challenges and as vaccine opponents continue to rail against the shots.

Packages that included an 83-page booklet opposing the vaccines were mailed to many people in the Orthodox Jewish communities in the Five Towns, Brooklyn and New Jersey last month.

The booklet bears a resemblance to a shorter anti-measles vaccine booklet that was produced by a group called Parents Educating and Advocating for Children’s Health during a measles outbreak in parts of Brooklyn two years ago. People with knowledge of both say they are filled with misinformation.

Rabbi Yakov Horowitz of Project Yes in Brooklyn; Yeshiva Darchei Noam, in Spring Valley; and the Center for Jewish Family Life, in Monsey, posted warning about the newest booklet on LinkedIn two weeks ago.

“It is easy to dismiss this as the deranged nonsense that it is,” Horowitz wrote, “but if past is prologue, many people in our community will refrain from taking the vaccine as a result of this disinformation campaign. (Remember the measles outbreak a while back?) We need the disinfectant of sunlight to expose and warn the public about these very dangerous people.”

Though vaccination numbers are relatively high, Lawrence resident Dr. Marc Sicklick, an immunologist with a practice in Cedarhurst, said he had received many calls about the shots. “I understand there is a fear of the unknown and all of us are aware of tragedies and chronic illness,” he said, “[but] there is no doubt in my mind that getting vaccinated is safer and more beneficial than getting Covid.”

*As of press time, 63.4 percentage of adults in Nassau County had received at least one dose of a vaccination, and across New York state the rate is 69.7 percent. The national average is roughly 64.3 percent.

Officials and experts are aiming for 70 percent or higher to achieve so-called herd immunity to the coronavirus. Another benefit of inoculation is that if a vaccinated person does become infected, the illness is milder and he or she is less likely to spread the virus, according to the Centers for Disease Control and Prevention.

The booklet bases its criticism of vaccination on the Jewish religion, with several rabbis quoting the Torah. In contrast, Rabbi Ya’akov Trump, of Young Israel of Lawrence Cedarhurst, pointed to the opinion of many other rabbis, as voiced by the Chicago-based Rabbi Yona Reiss in a December podcast produced by Tradition, a journal published by the Rabbinical Council of America.

The mailed manifesto included several pages of doctors’ names, their affiliations and a list of countries that have raised concerns about the vaccine. Dr. Carol Taccetta, of Newbury, Calif., was one of the few American physicians listed.

A clinical pathology specialist who graduated from the Chicago Medical School At Rosalind Franklin University-Medicine & Sciences in 1988, Taccetta told the Herald said she was happy to have her name listed, because she has many concerns.

“It’s not proven to be efficacious and it is using new platforms in America that are unknown and untested, it is experimental and then deployed on a mass untested level,” Taccetta said, adding that she paid her own son $1,600 not to take part in a clinical trial of a Covid vaccine.

“We have seen people who are very, very vulnerable get hurt,” she added, noting the initial use of radiation treatment and the infamous Tuskegee experiment from 1932 to 1937 that used Black people to study syphilis.

On May 23, Yeshiva Darchei Torah, in Far Rockaway, received a letter from a Lynbrook-based attorney, Lisa Firshing, challenging the school’s requirement that “employees at all levels” be vaccinated by July 1 in order to be offered employment in the 2021-22 school year.

Firshing, who did not respond to a request for comment, claimed that she wrote her six-page letter because “numerous employees and students” had contacted her about Darchei Torah’s policy. “It is a violation of federal law to mandate receipt of a product that is only pursuant to an [emergency use authorization],” Firshing wrote.

The Supreme Court ruled over a century ago, in Jacobson v. Massachusetts, that state governments could impose vaccine mandates as long as they were reasonable and fairly enforced. A New York state court recently upheld the constitutionality of a 2019 law that eliminated religious exemptions for vaccines.

“From the start of this pandemic, Yeshiva Darchei Torah has been proactive in protecting the health and wellbeing of its students and staff,” the school stated in an email. “Pursuant to both legal and medical advice, the Yeshiva is actively encouraging every member of its staff to be inoculated against Covid-19.”

Reflecting on the vaccine debate, Sicklick said there was not one doctor he respected that advised patients not to get vaccinated. “People are taking medical advice from non-physicians and making decisions that are just not fully informed,” he said. “Rabbis should be directing people to get competent medical advice.”

Have an opinion on getting the Covid-19 vaccine? Send a letter to jbessen@liherald.com.

*Reflects an updating of the vaccnation numbers.