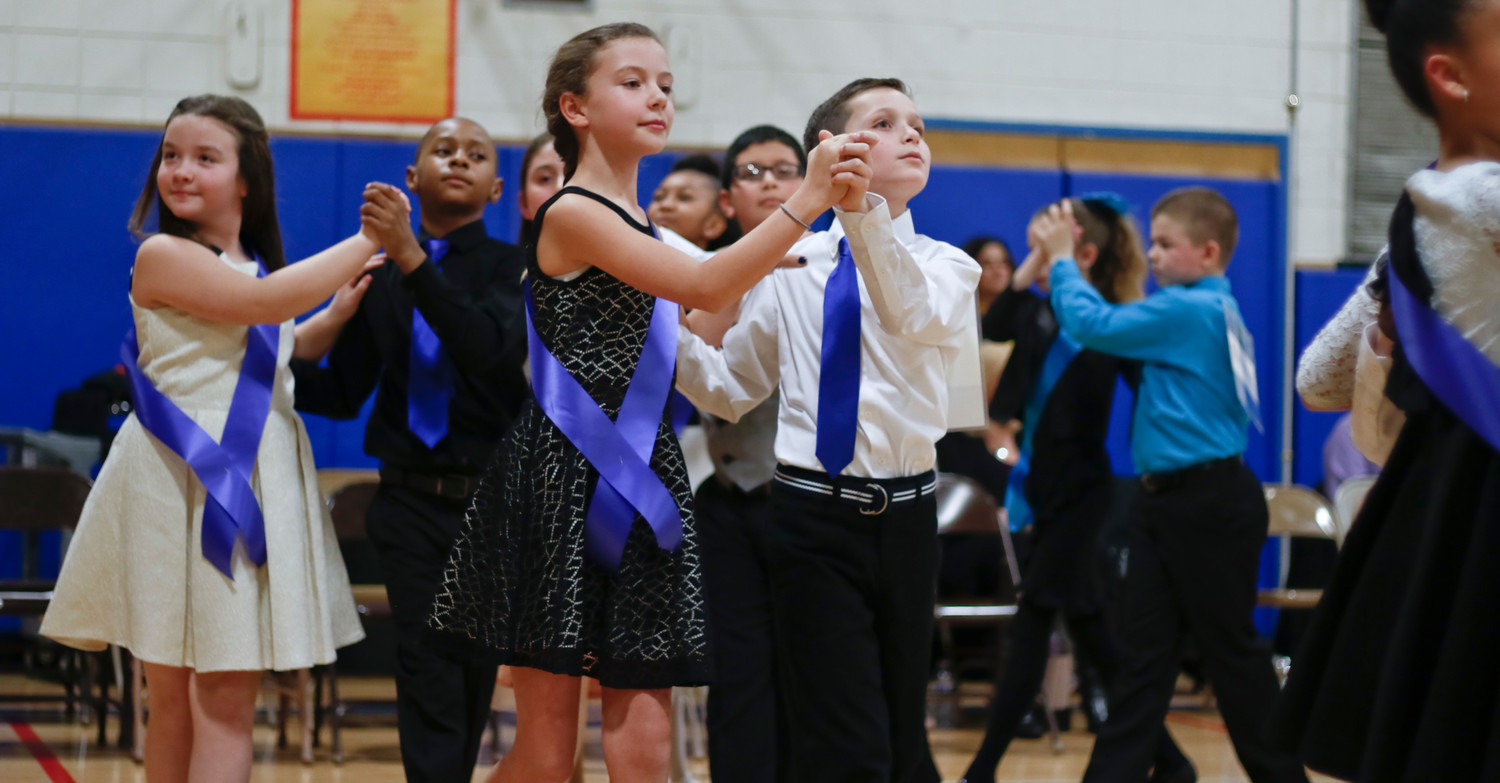 Maggie Batkin and Charlie Piscatelli, center, were among the dancers representing Covert Elementary School at a ballroom dancing competition in Port Washington on Jan. 24. Behind them to the left, their classmates, Julia Coles and Lamont Briggs, showed off their skills.
Christina Daly/Herald 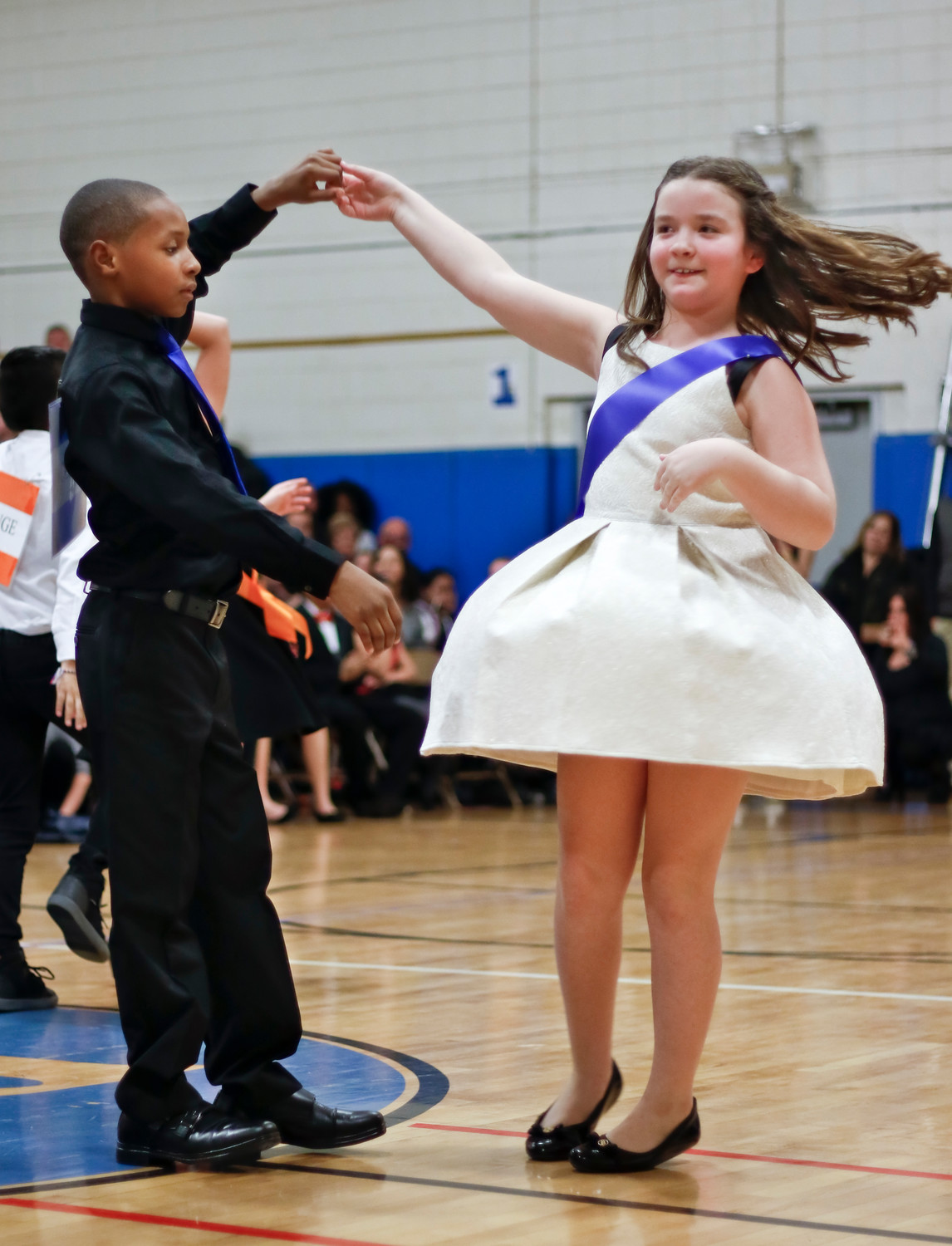 Briggs and Coles made for a dynamite dance duo.
Christina Daly/Herald 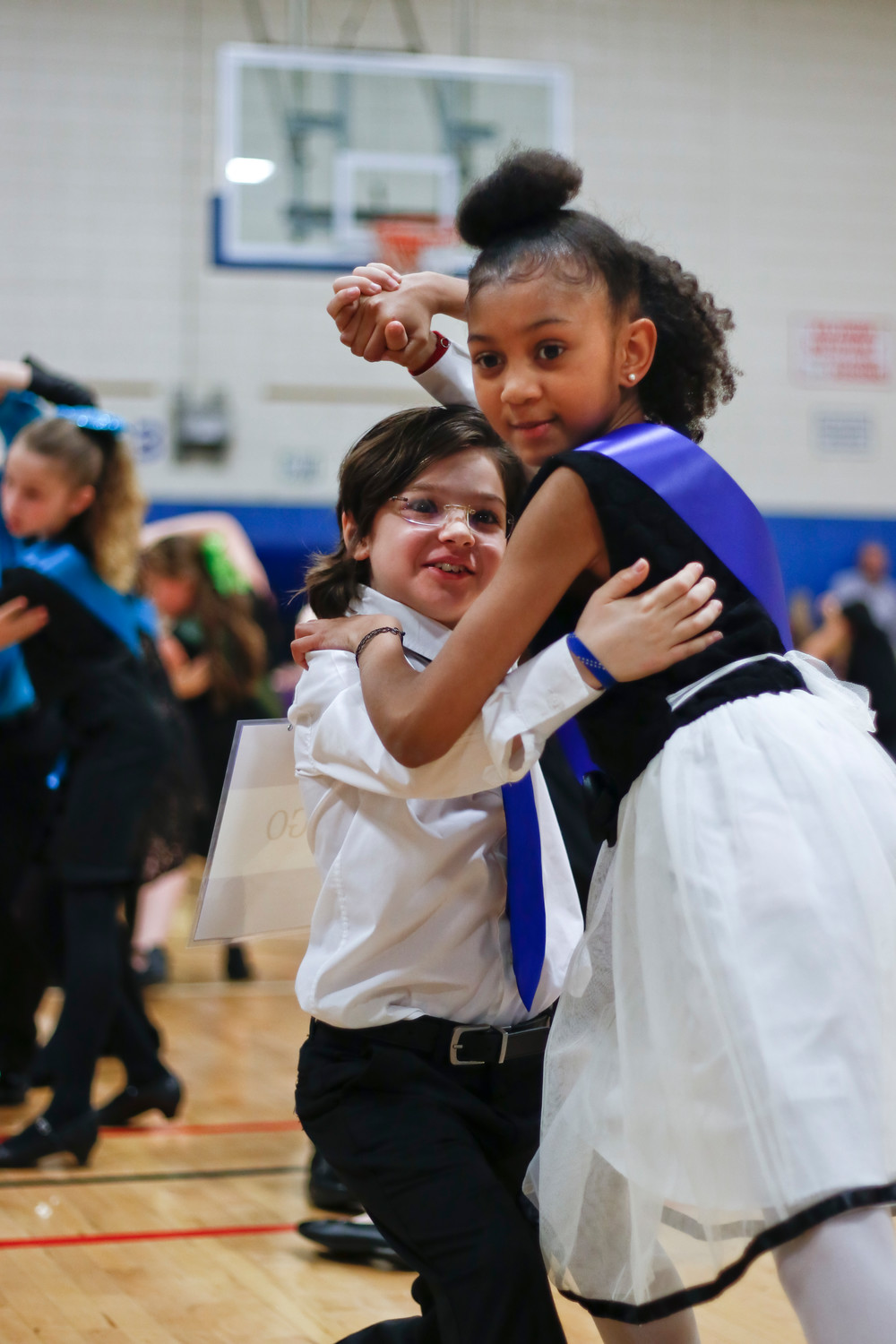 Ethan Aymami, left, and Alaina Rivera were laser-focused during the competition.
Christina Daly/Herald 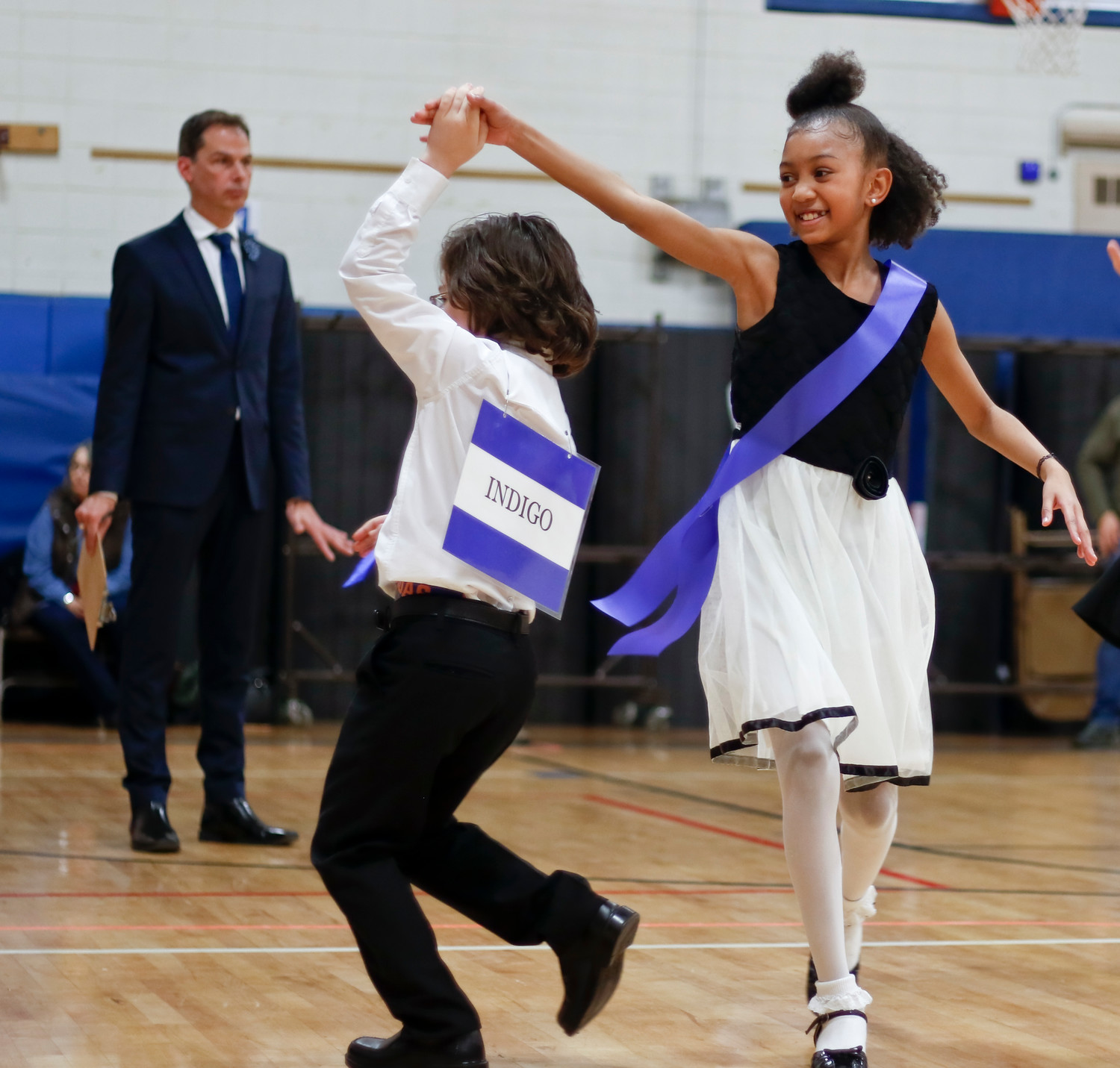 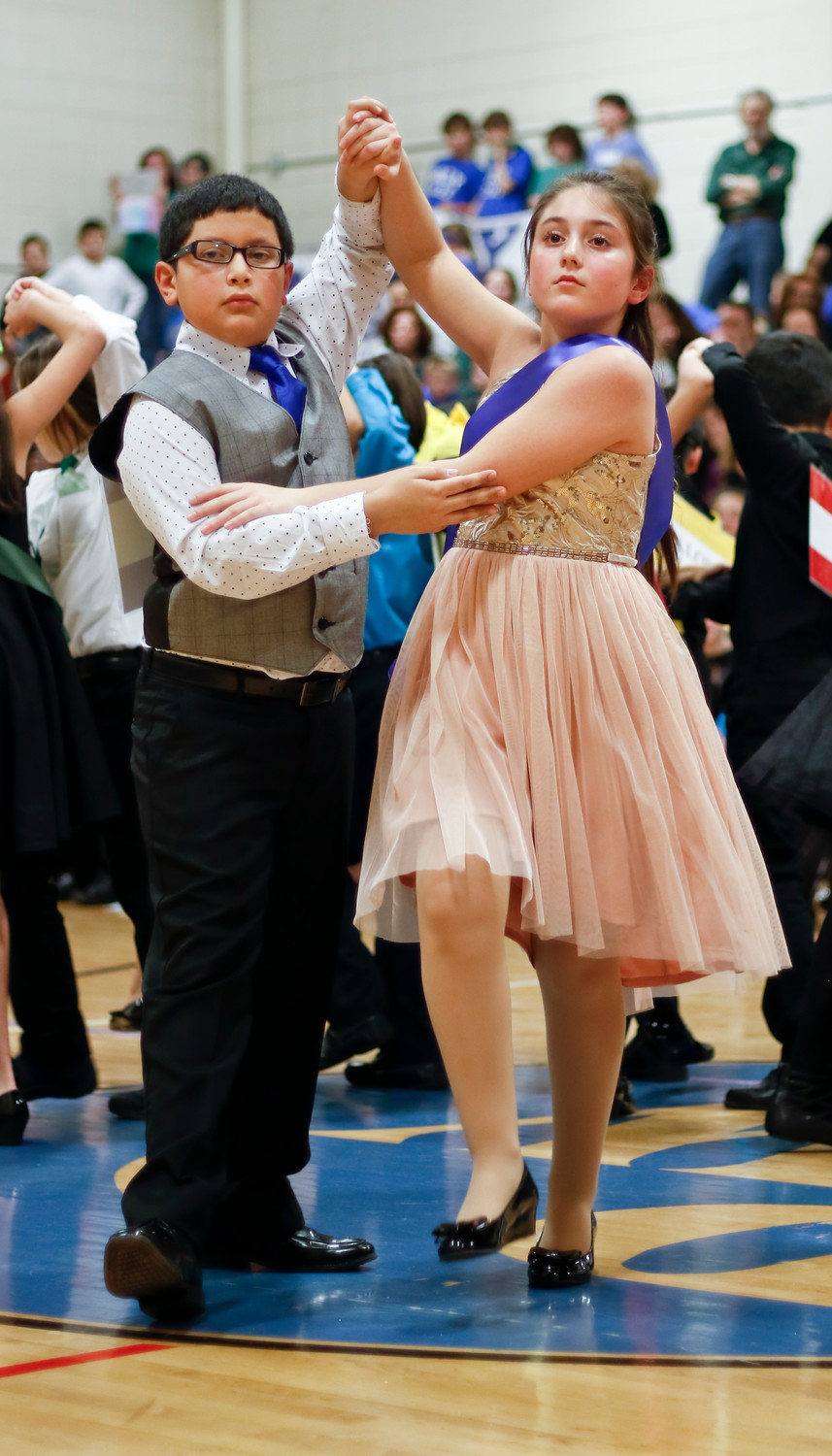 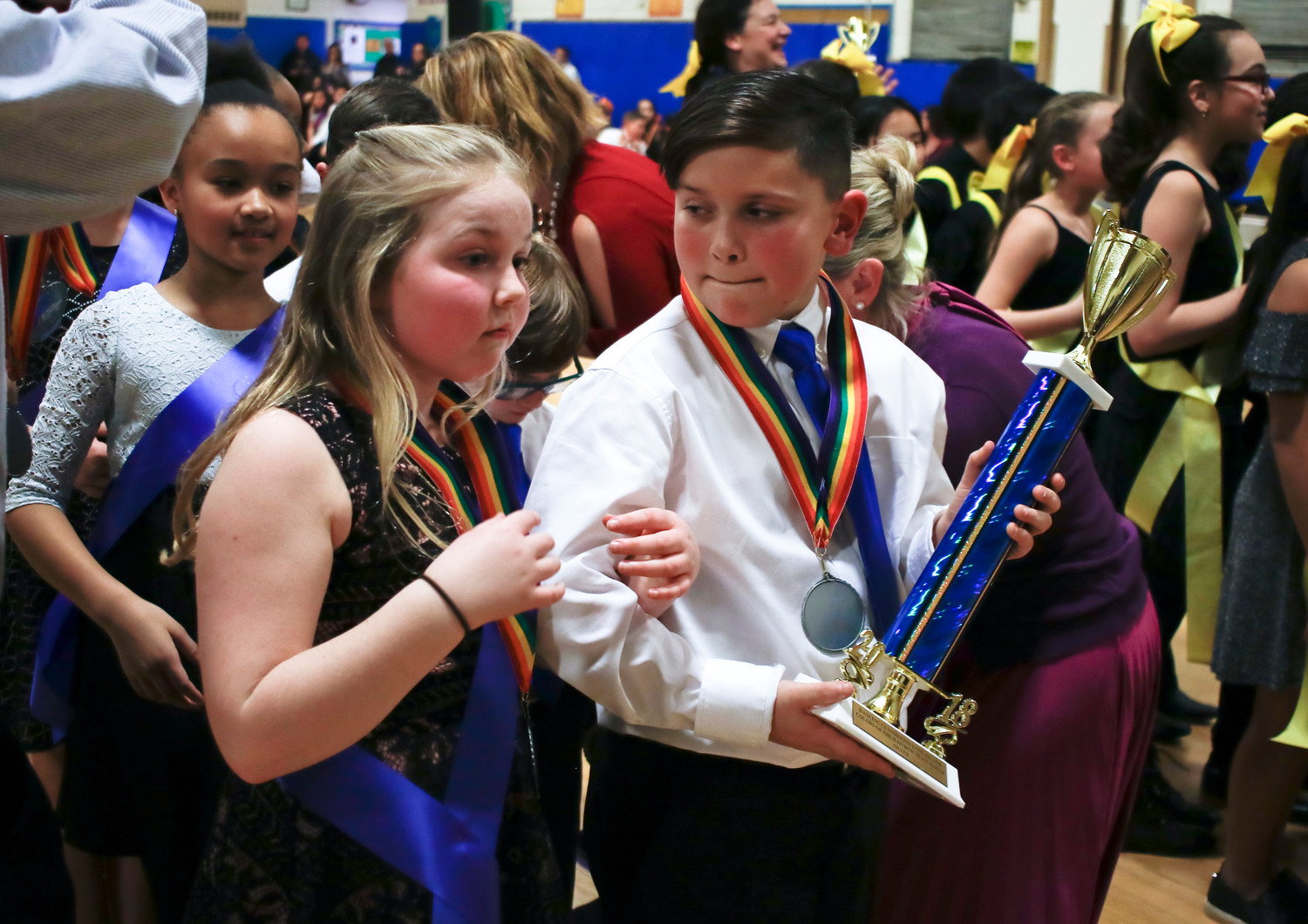 Captains Bridget Connors and Jack Sciallis accepted the trophy for their classmates.
Christina Daly/Herald
Previous Next
By Ben Strack

A spirited bunch from Rockville Centre’s William S. Covert Elementary School took to the dance floor on Jan. 24 for Dancing Classrooms Long Island’s Winter Colors of the Rainbow Team Match & Festival in Port Washington, thrilling their parents and teachers and earning silver in the process.

Eighty-four students representing seven schools from across Long Island competed in the event, which featured a variety of dances and is portrayed in the Paramount Classics hit documentary, “Mad Hot Ballroom.”

Fourth- and fifth-graders at Covert completed a 20-lesson training program this fall through Mad Hot Ballroom/Dancing Classrooms, a not-for-profit project of the American Ballroom Theater Company that launched in New York City in 1994. It began as an arts program teaching ballroom dance to the upper elementary and middle school students in schools throughout the five boroughs, but extended to Long Island after Covert gained interest.

The boys and girls learned various styles of dance, including merengue, foxtrot, rumba, tango and swing, showing off what they learned at a recital on Nov. 29. Wanting to keep dancing, the students then brought those skills to the competition last week, where they impressed the judges, as well as their biggest supporters.

“They really knew their steps … and they were never off-beat,” said Susan DeRosa, a fourth-grade teacher and dancing coach. “The parents were in awe.”

Twelve fourth-graders were chosen to represent the school in the event, as DeRosa and fellow teacher and coach Cindy Marasco led rehearsals for about two weeks leading up to it. Teaching assistant Rich Petrone served as a co-coach. The competition featured three rounds, requiring participants at times to do a specific dance on the spot. “You have to know every dance, and know them well,” DeRosa noted.

She added that representatives of the other six schools that competed — five of which were from Port Washington — were fifth-graders, noting the size difference compared to the fourth-grade Covert students. “They obviously showed the judges something … because obviously our kids stood out.”

Covert shared the silver with Guggenheim Elementary School, as captains Bridget Connors and Jack Sciallis accepted the trophy for their classmates. The morning after, Covert Principal Darren Raymar made an announcement to the school about the accomplishment, according to DeRosa, and the fourth-graders visited each classroom carrying the trophy and wearing their medals.

“It was just so rewarding to watch them grow through this process,” Marasco said. “I’m just bursting with pride how far they came. They showed elegance and grace in a humble way.”