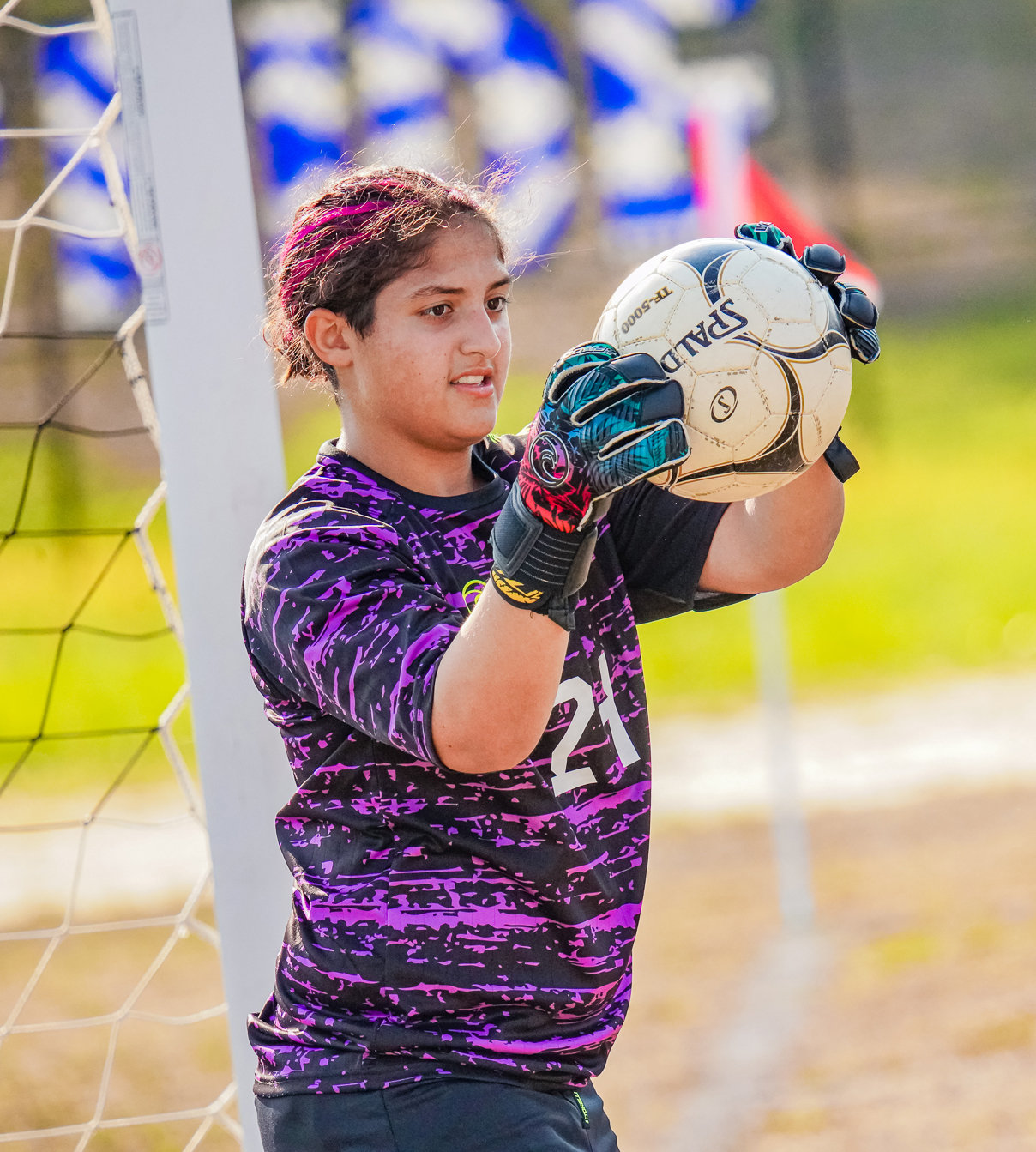 Sophomore goalkeeper Jennah Farooki made 11 saves Sept. 23 as the Jets avenged a season-opening defeat to Hicksville with a 1-0 win.
Courtesy Asim Farooki
By Tony Bellissimo

Thanks to a 7-1-1 start, East Meadow girls’ soccer is playing meaningful games in October with a chance at landing in the Nassau Conference AA-2 top spot with a big finish.

“It looks like it’s going to be a battle to the end,” Jets coach Nicolette Tortorici said. “Last season was difficult playing in the top conference, so it’s pretty exciting to be in contention.”

East Meadow took a considerable step forward Sept. 23 with a 1-0 victory at Hicksville. Sophomore Rachel Nasshorn scored the lone goal early in the second half, assisted by senior Angela Bracco, and sophomore goalkeeper Jennah Farooki made 11 saves for her third consecutive shutout and fifth of the season.

“We lost 1-0 to Hicksville in the opener, so beating them the second time around was huge,” Tortorici said. “It was a major confidence boost and hopefully the turning point in the season. Hicksville plays fast and has a deep bench. Jennah kept us in it with some incredible saves and we played a strong second half. It was a win we had to get to keep our conference title hopes alive.”

The opener remains East Meadow’s only notch in the loss column with five games remaining, including a key rematch with first-place Baldwin at home this Saturday at 12:30 p.m. On Sept. 16, the teams battled to a 1-1 draw at Baldwin with Nasshorn, who leads the Jets in goals with 9, finding the back of the net again.

“Rachel is very skilled and doesn’t stop moving,” Tortorici said of the All-Conference center-midfielder. “We wouldn’t be where we are without her. She plays both ends of the field and never tires. We look for her to make runs and she’s a dominant shooter.”

With Nasshorn’s aggressive style, junior Alexis Chew’s defensive role as a center-midfielder is key to limiting counter attacks. Chew also has chipped in a pair of goals. Bracco (3 goals, 2 assists) and fellow senior captain Gianna Devita are the starting outside midfielders and vastly improved from last fall, Tortorici said. “Angela and Gianna play with so much heart and they just outwork opponents,” she said.

Senior captain Ava Lanza is the leader in the defensive zone, the coach noted. “She’s very aggressive and does whatever it takes to stop the ball,” Tortorici said. Junior Arianna Fuduli returned to the defense as well and handles all of the team’s corners and free kicks. She has 3 assists so far. In the middle of the defense, junior twins Jennifer and Kayla Cassidy have both been rock-solid in their first varsity campaigns.

At forward, juniors Myrdiva Jean-Pierre and Julia Marquez are the starters and each has scored twice. Jean-Pierre was injured recently and could miss time. Tortorici said freshman Katelyn Coffey, who scored her first varsity goal earlier this season, would be called upon to fill the void.