Herald staffers get close-up look at the MTA’s ‘megaproject’ 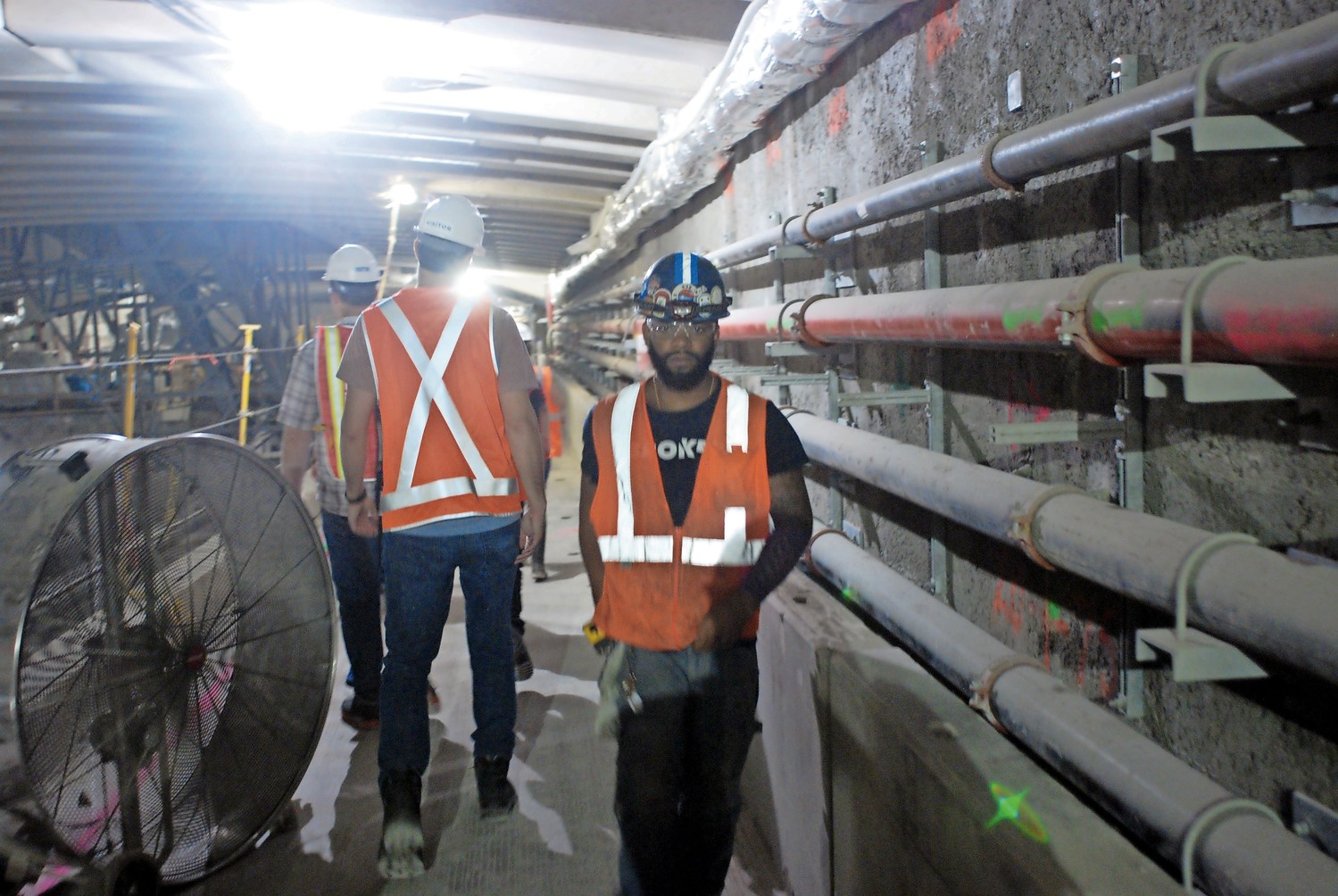 The Metropolitan Transportation Authority is now at work on the $11.1 billion East Side Access Project, which will bring Long Island Rail Road service to Grand Central Terminal for the first time.
Scott Brinton/Herald 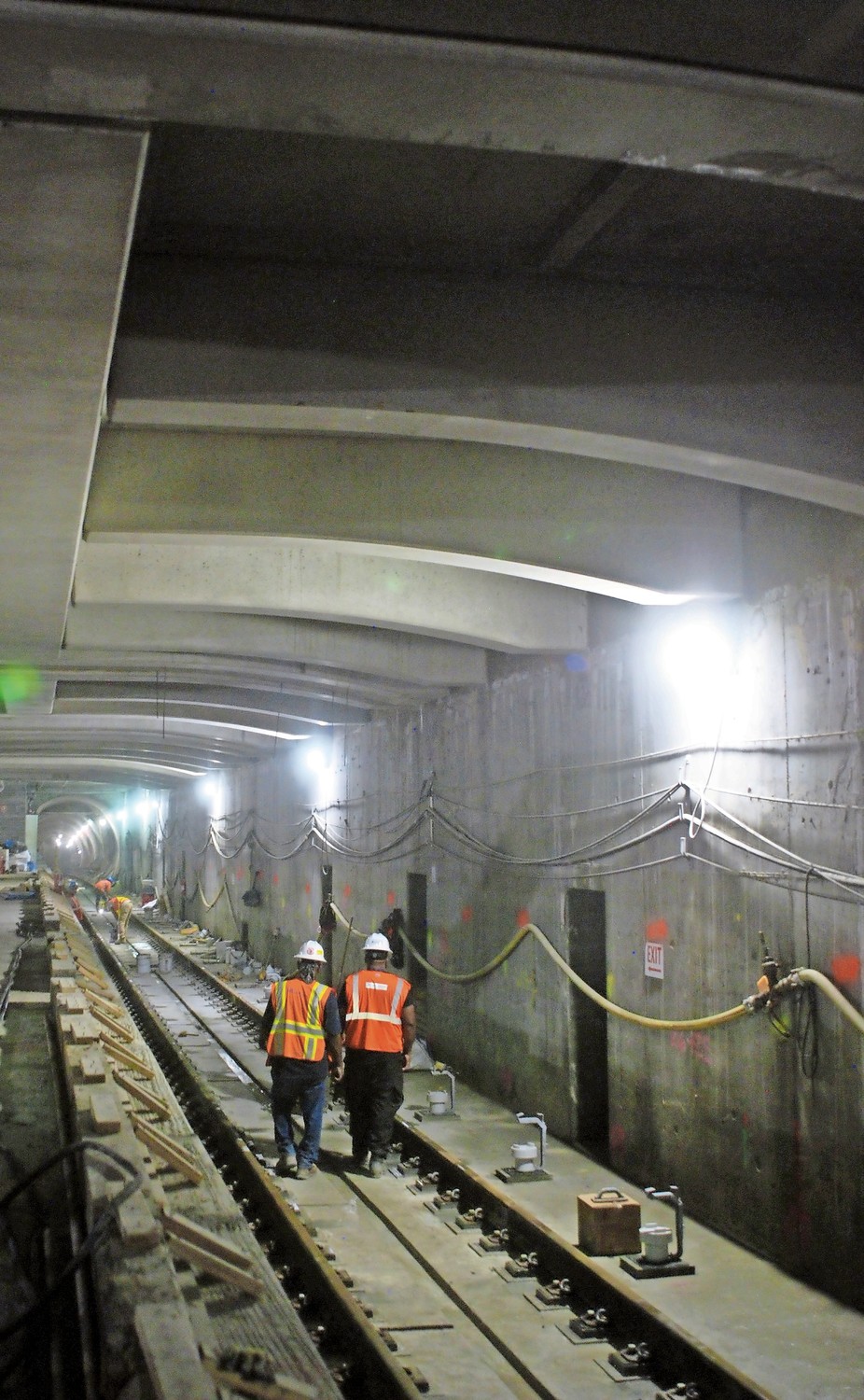 New LIRR tracks are going in under Grand Central. When complete, the LIRR station will have eight tracks and four platforms.
Scott Brinton/Herald 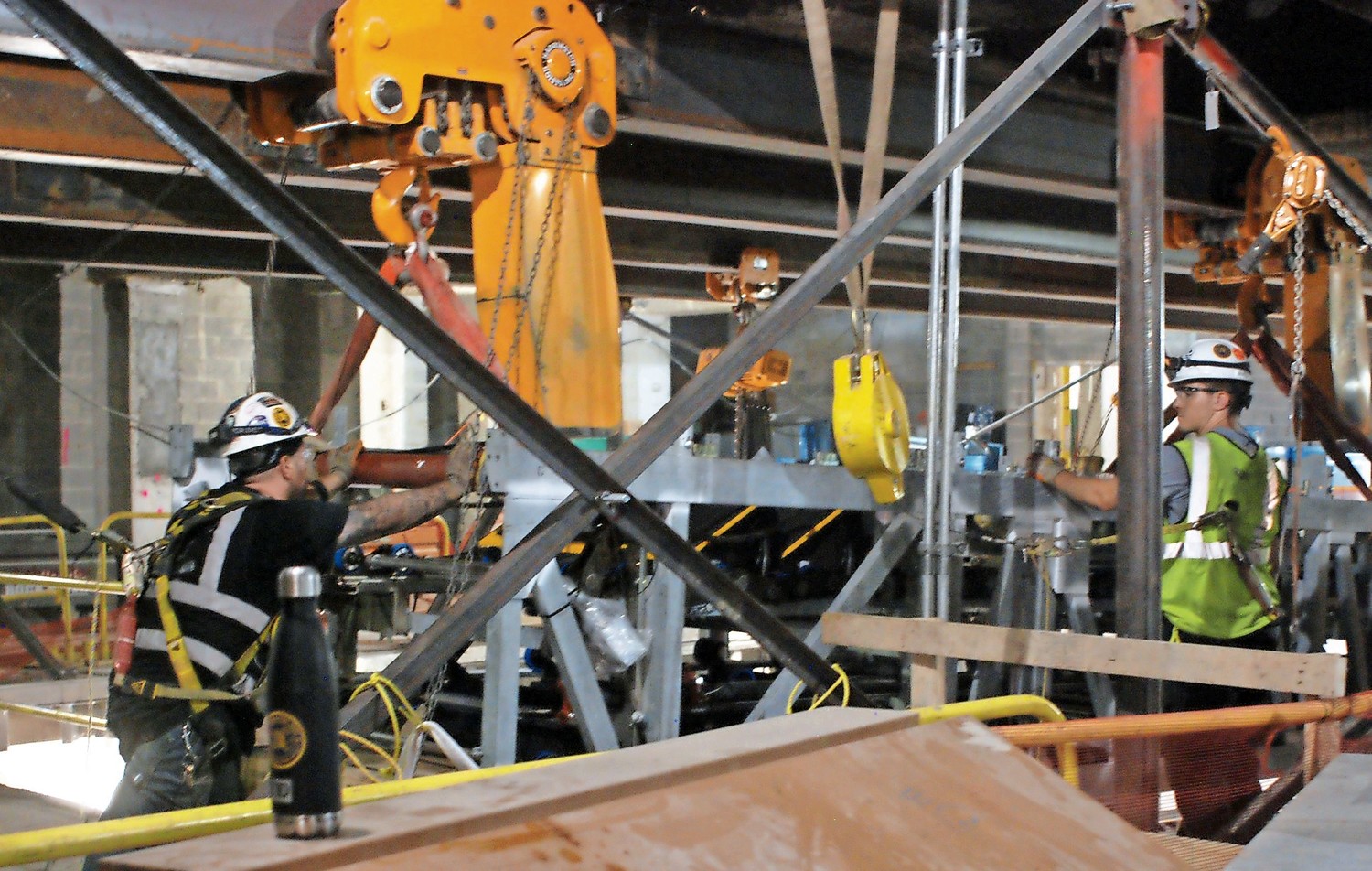 The station’s cavernous corridors were abuzz with construction workers during a recent Herald tour of the site.
Scott Brinton/Herald 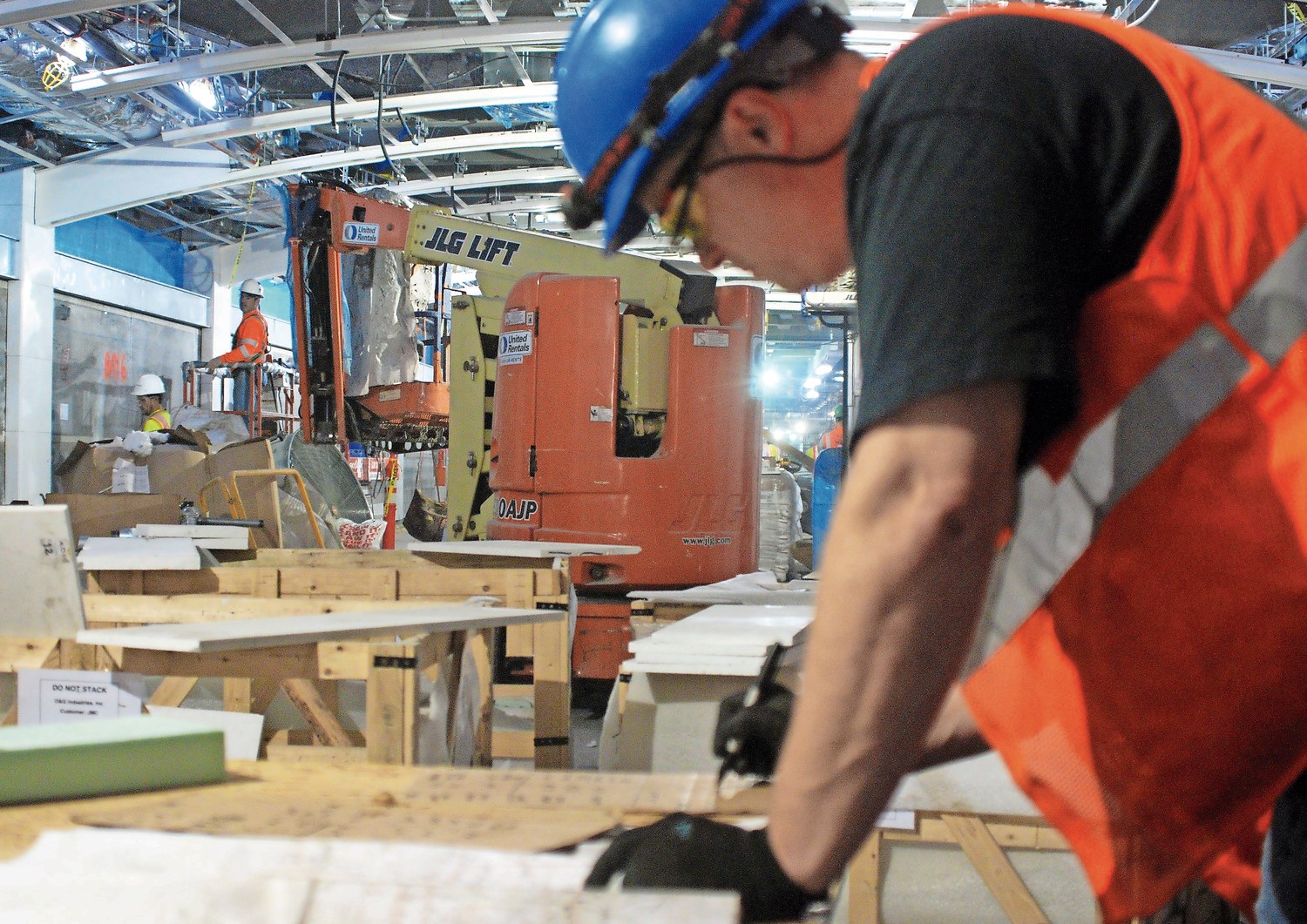 A worker consulted plans, while others laid tiles on walls in the background.
Scott Brinton/Herald
Previous Next
Fast facts

The East Side Access project will add 40 miles of track to the Long Island Rail Road, and the new LIRR station at Grand Central Terminal will measure six blocks long. Construction workers had to blast and bore through a skyscraper’s worth of 350-million-year-old bedrock to carve out the ESA tunnels leading in and out of Manhattan.

ESA is the first expansion of the LIRR in a century. A hundred years ago, the population of Nassau and Suffolk counties was 236,000. Today it’s 2.8 million.

Founded in 1834, the Long Island Rail Road is the busiest commuter rail line in the United States, with an average of 265,000 riders on weekdays.

Updated, Aug. 23, 6:30 a.m.: On a plain wall between tracks 113 and 114, a plywood door separates old from new at Grand Central Terminal in Midtown Manhattan. It is the inconspicuous entrance to the Metropolitan Transportation Authority’s $11.1 billion East Side Access project — currently among the largest construction undertakings in the U.S.
The project will bring Long Island Rail Road service to Grand Central for the first time — if all goes well, by Dec. 31, 2022. It has been called a megaproject because of its scale — the new LIRR station at Grand Central will measure 350,000 square feet, the size of six football fields.
According to the MTA, the station will ease train congestion at Pennsylvania Station and cut thousands of Long Islanders’ commutes by 20 to 40 minutes a day, saving them each a minimum of 10 work days in travel time a year.
“This is a transformational project for the Long Island Rail Road,” said Bill Goodrich, senior program executive for the ESA project, who gave a group of 10 Herald staffers a tour of the construction site on Aug. 9.
The smell of recently poured cement filled the air in the cavernous halls leading into the dusty construction site. Bright overhead lamps created light pools that were surrounded by dark shadows. Drills and jackhammers wailed, while oversized fans whirred, doing little to cool the stifling heat. Wooden beams and marble tiles, quarried in Turkey, were stacked high.


Workers were scattered in all directions. Many were laying tiles on the cinder-block walls. Others were installing the high-rise escalators that will carry LIRR riders from the tunnels below to Grand Central and back again. In all, there will be 17 escalators. Nine are finished.
LIRR trains will arrive and depart on eight tracks, with four platforms on two levels, separated by a mezzanine. The concourse above will have 25 retail spaces. The deepest tunnel is 160 feet, or 15 stories, below Grand Central.
The project will enable the LIRR to add as many as 24 new trains, or a total of 288 cars, to its fleet, Goodrich said. Put another way, it will enable the railroad to increase rider capacity by 45 percent, from 300,000 to 435,000 daily commuters.
The LIRR currently plans to purchase 160 new cars, at a cost of $700 million, “to support ESA,” according to Aaron Donovan, the MTA’s deputy communications director.
The East Side Access project was first proposed in 1963. Engineering planning began in the 1990s, with "prep work” — including construction of a new train yard in the Bronx — beginning in the early 2000s. Construction of the tunnels themselves started in 2007, Donovan said.
Boring and blasting through eight miles of schist bedrock under Manhattan and three miles of wet soil and rock under Queens was arduous and time-consuming, noted Goodrich, who called the schist “a good, competent rock,” capable of supporting skyscrapers.
Original plans, developed in the 1990s and early 2000s, put the cost between $3.5 billion and $4.5 billion. The Herald first toured the project in 2011, with the then president of MTA Capital Construction, Dr. Michael Horodniceanu. At the time, the MTA estimated that the project would cost $7.3 billion and be complete by 2016.
If work remains on its current schedule, the project will be $3.8 billion over the MTA’s 2011 budget projection and six years late.
Since October 2012, MTA officials have felt an increased urgency to complete the project, Goodrich said, because doing so will free Amtrak to overhaul four train tunnels at Penn Station that Hurricane Sandy submerged in saltwater.
The East Side Access project is funded through 2020, Goodrich said, adding that a total of $10.3 billion will have been spent by that year. The state is largely funding the work, but the federal government and New York City are contributors as well. The State Legislature must approve $800 million to complete the final two years of work.
The project is now 75 percent complete, Goodrich said. “We’ll get the funding after all these years,” he added.
Goodrich ended the tour on the upper floor, above the train tunnels, in an expansive room where the ticket counter will be. He said with a smile that most riders would likely buy their tickets with the LIRR’s cell-phone app by 2022. But, he said, “There’ll always be a certain percentage” of riders who will want paper tickets.
Report an inappropriate comment