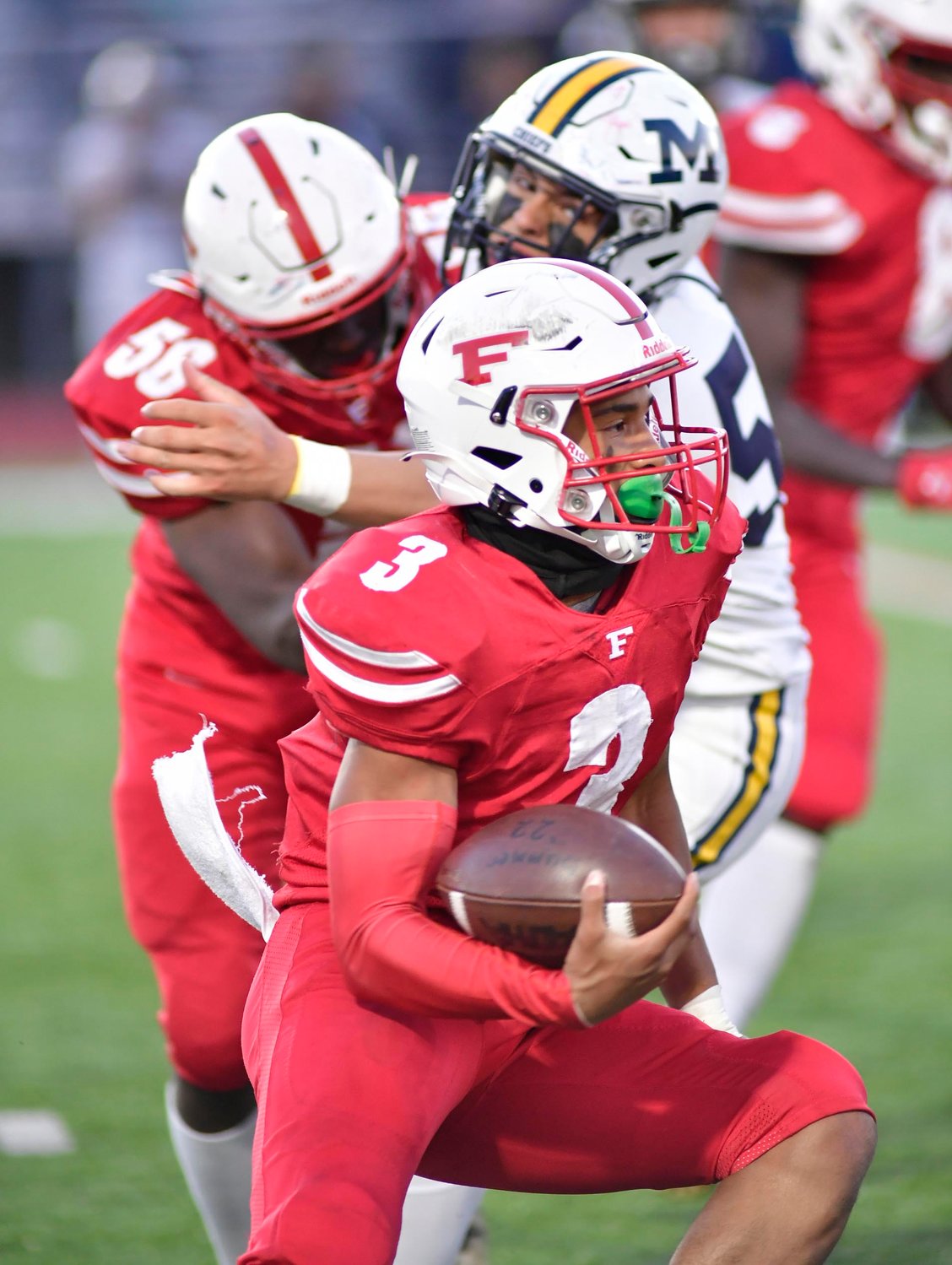 Freeport quarterback D'Angelo Gordon had a pair of rushing touchdowns in Friday's loss at Massapequa.
Anthony Hughes/Herald
By Tony Bellissimo

Through the first three weeks of Nassau Conference I football, Freeport produced 102 points including eight touchdowns of at least 40 yards.

However, the Red Devils just have one victory to show for it. Last Friday night in brisk conditions they gave two-time defending county champion Massapequa all it could handle before falling 35-28 at Berner Middle School. The Chiefs won it on a 59-yard touchdown pass from Paul Dulanto to Shane Horan with 1:38 remaining.

“It was definitely an entertaining game,” Freeport head coach Russ Cellan said. “We didn’t get the win, but I thought we made huge progress. We’re getting better and it’s not where you are in Week 3, it’s where you are in Week 9. We went toe to toe with the top-seeded defending champs and in the end they took advantage of busted coverage.”

The Red Devils, who never led and fell behind 14-0 midway through the second quarter, battled back all night and forced a pair of deadlocks including junior quarterback D’Angelo Gordon’s 54-yard touchdown run and senior Nazair Jean-Lubin’s successful two-point conversion with 3:11 left for a 28-28 tie.

Freeport (1-2) also knocked on the door in its final possession, driving inside the Massapequa 30 in the closing seconds before a scrambling Gordon was sacked by Dylan Wakely on the last play. Gordon and senior Martese Davenport both had a pair of rushing touchdowns.

“We made some big plays but we allowed too many big plays,” Cellan said. “Massapequa had 399 yards and 265 of those came on five touchdowns.”

Ryan Fountain had scoring receptions of 65 and 70 yards, and Tyler Villalta added a 65-yard touchdown run for the Chiefs, who improved to 3-0.

Fountain’s first touchdown catch put Massapequa up by two scores when Freeport got a spark from sophomore Jayden Gordon, who returned a kickoff to midfield and then made a leaping grab along the sideline to move the ball into enemy territory for the first time. Four plays later, Davenport scored on a 1-yard run. D’Angelo Gordon then caught a 2-point conversion pass from Jean-Lubin, who already has three special teams touchdowns on the year, on a gadget play and the Red Devils trailed 14-8 at halftime.

Jean-Lubin starred on the opening drive of the second half, catching passes of 27 and 37 yards to set up Gordon’s 6-yard touchdown for a 14-14 tie. Trailing 21-14, Davenport broke free for a 57-yard score to get Freeport within a point. “Martese is running with a lot of confidence,” Cellan said of Davenport, who also had a pair of touchdown runs in the Red Devils’ 38-13 victory over East Meadow in Week 2.

Next up for Freeport is a trip to Hempstead to face the 3-0 Tigers this Saturday at 2 p.m. Cellan is hopeful senior two-way lineman Jonathan Meza can play after leaving the loss to Massapequa in the fourth quarter.

“Hempstead has some talent and they’re playing well,” Cellan said. “It’ll be a good test.”