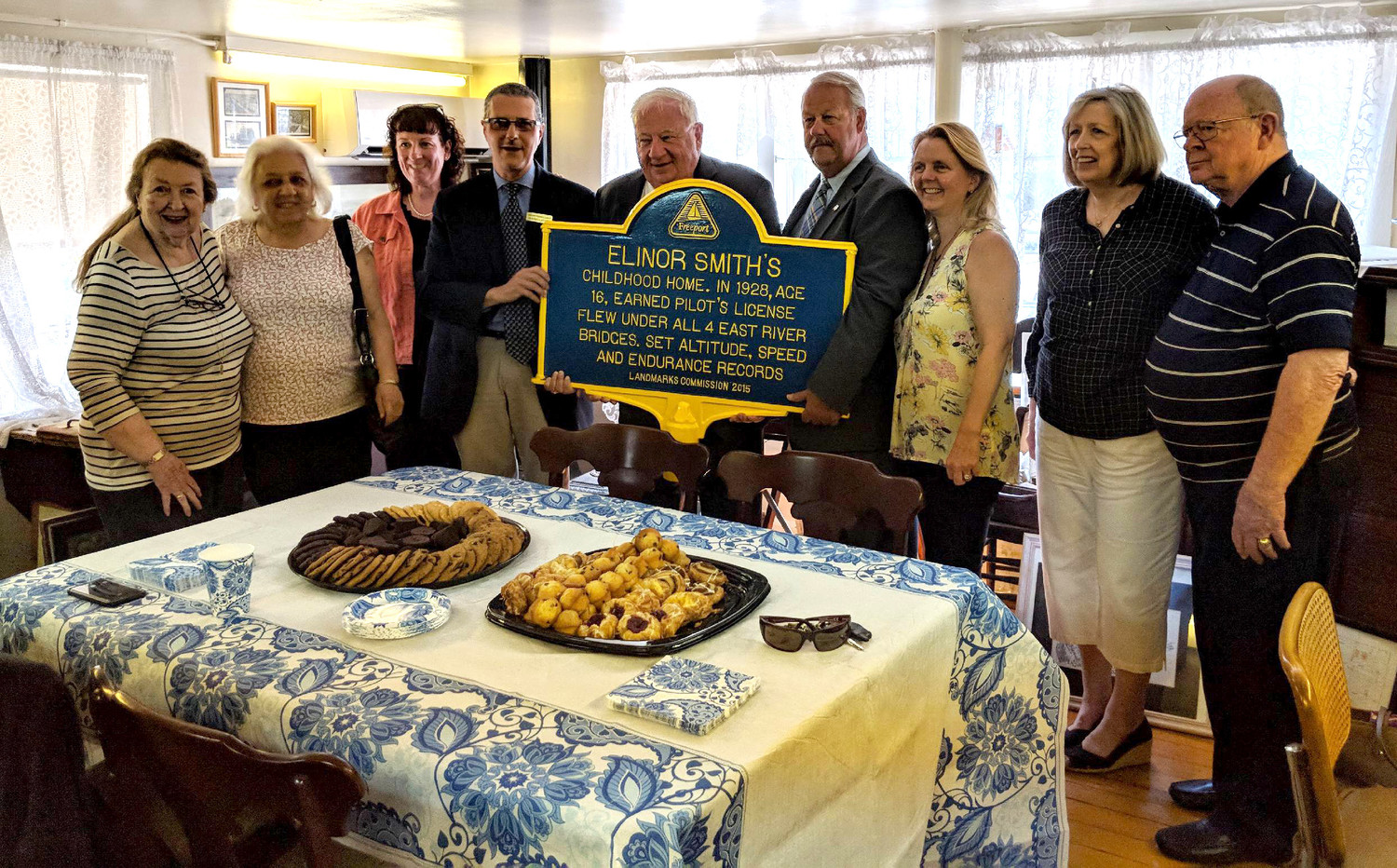 The Freeport Historical Society held a ceremony to honor Elinor Smith for her contributions to aviation on July 20, and welcomed Smith’s family, along with elected officials from the village, county and state.
Courtesy Senator Brooks’ office 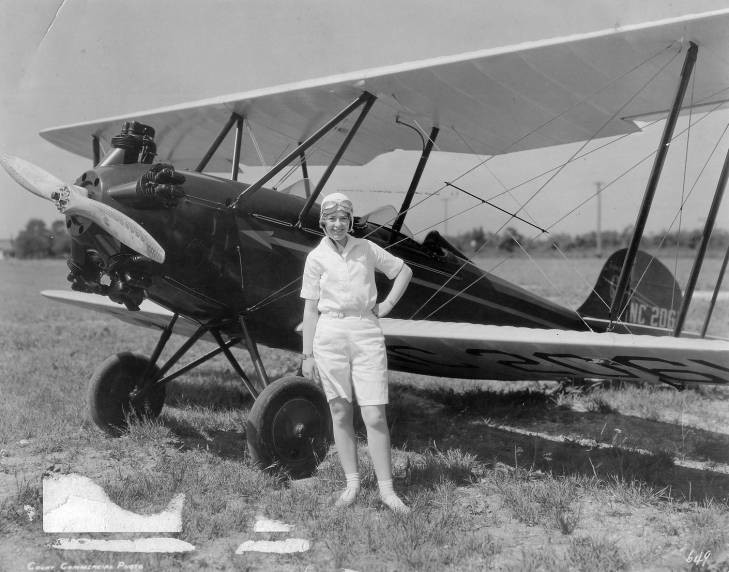 Smith with the Bellanca plane in which she set an endurance record of 26 1/2 hours in the air in 1929.
Courtesy Freeport Historical Society 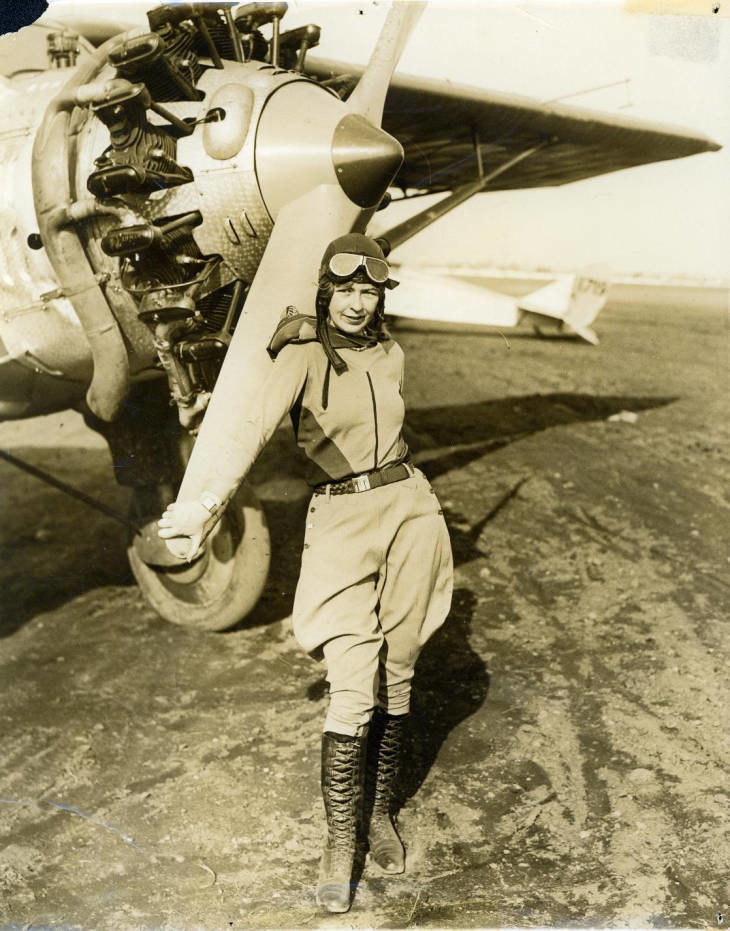 ‘There isn’t anything that a female pilot can’t do that a male pilot can do in a plane,” Smith once said.
Courtesy Freeport Historical Society 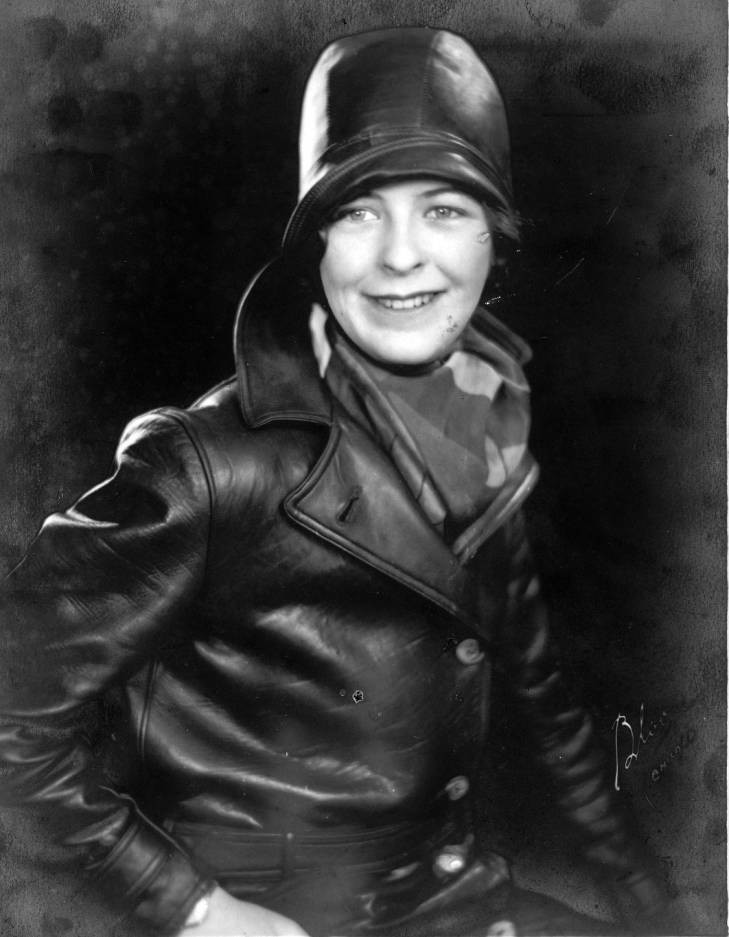 I had no business fooling around up there without oxygen —and I knew it.”
Elinor Smith, Pioneering aviator
By Nadya Nataly

It was virtually unheard of in the 1920s for a woman to fly a plane, but by October 1928, 17-year-old Freeporter Elinor Smith had flown under the Manhattan Bridge and three others crossings along the East River. After this series of aerobatics, she was nicknamed the “Flying Flapper of Freeport.”
Almost 90 years later, on July 20, the Freeport Historical Society and the Landmarks Commission me-morialized Smith with a historical marker. Freeporter Kevin McKay donated money to erect the roadside tribute. Originally, it was to be placed in front of Smith’s childhood home, on Nassau Avenue, but the homeowners didn’t want it on their property.
“We respect their wishes,” said Regina Feeney, a Historical Society archivist and trustee, of the homeowners who now occupy Smith’s one-time residence. “We will leave the marker at the Freeport Historical Society until such time as the marker can be placed in front of the home.”
The marker is now an exhibit at the society’s museum, with photographs that the Sullivan family lent to the organization.
Freeport Mayor Robert Kennedy, Nassau County Legislator Debra Mulé, Freeport Memorial Library Director Ken Belfiore and State Sen. John Brooks joined members of the Historical Society and the Landmarks Commission to honor Freeport’s own “Lady Eagle,” another nickname that Smith was known by.


Smith started flying at age 10 by taking lessons from Clyde Pangborn, a pilot known for his aerial stunts, and later from Frederick Lund, another pilot. By order of her father, Tom Smith, she could not be taught to take off or land (though she eventually learned how). Smith became the youngest pilot in the world at 16 when Orville Wright signed her pilot’s certification.
Awarded her “freedom papers” to fly, Smith was unstoppable. In January 1929, she set a women’s solo endurance record, 13½ hours. Then, three months later, she broke it with a 26½-hour flight. In 1930, she set a women’s altitude record of 27,419 feet. Within a year, she reset that record at 32,576 feet, according to her son Patrick Sullivan, 80, who now lives Carmel, Calif.
“I had no business fooling around up there without oxygen — and I knew it,” Smith wrote of her record-breaking efforts in her autobiography, “Aviatrix,” published in 1981.
In the book, Smith described her days hanging out at Roosevelt Field around planes and aviation pioneers. She wore her brother’s pants, a sports shirt, sneakers with argyle socks, a beat-up leather jacket, a cotton helmet and goggles.
Smith was moving up aviation’s ranks around the same time that Amelia Earhart was taking flight. She beat Earhart in 1930 in a poll for “Best Woman Pilot in America.” In 1934 she became the first woman to grace the back panel of a Wheaties box after setting a solo endurance record, a world altitude record and a women’s world speed record. Lou Gehrig appeared on the front of the box that year.
Sullivan came to Freeport with his older sister, Patricia Sullivan, 82, from New York City, and his youngest sister, Pamela Sullivan, 74, from Glen Cove, to honor their mother. The siblings sat at the Historical Society’s table reminiscing and laughing about her antics.
“My mother was so thrilled to see the female airline pilots” later in her life, Patricia said. “She always said, ‘There isn’t anything that a female pilot can’t do that a male pilot can do in a plane. It’s not a matter of strength, but a matter of intelligence and endurance, and if women can bear children, they have the endurance.’”
According to Patricia, when her mother married Patrick Sullivan Jr., a state legislator and attorney, in 1933, the couple agreed that she should give up flying to raise their family. The Sullivan siblings said their mother spent her days caring for them, all the while sharing stories of her flying antics.
“There was always talk around the dinner table,” Patrick said.
“Yeah,” Patricia said, “it was always her stories of how she came in like this and pulled out like that.”
After her husband’s death in 1956, Elinor took to the skies once again, but this time just for fun. As a member of the Air Force Association, she was allowed to pilot the Lockheed T-33 Shooting Star jet trainer. At 89, she took one of her last flights on an experimental Raytheon F-33 Bonanza at Langley Air Force Base in Virginia. She died in March 2010, at the age of 99.
Though she was an expert pilot, Smith never graduated from high school. On Oct. 6, 2010, Freeport Superintendent Dr. Kishore Kutcham posthumously awarded her a high school diploma at the Cradle of Aviation Museum in Garden City. Her family accepted the honor.