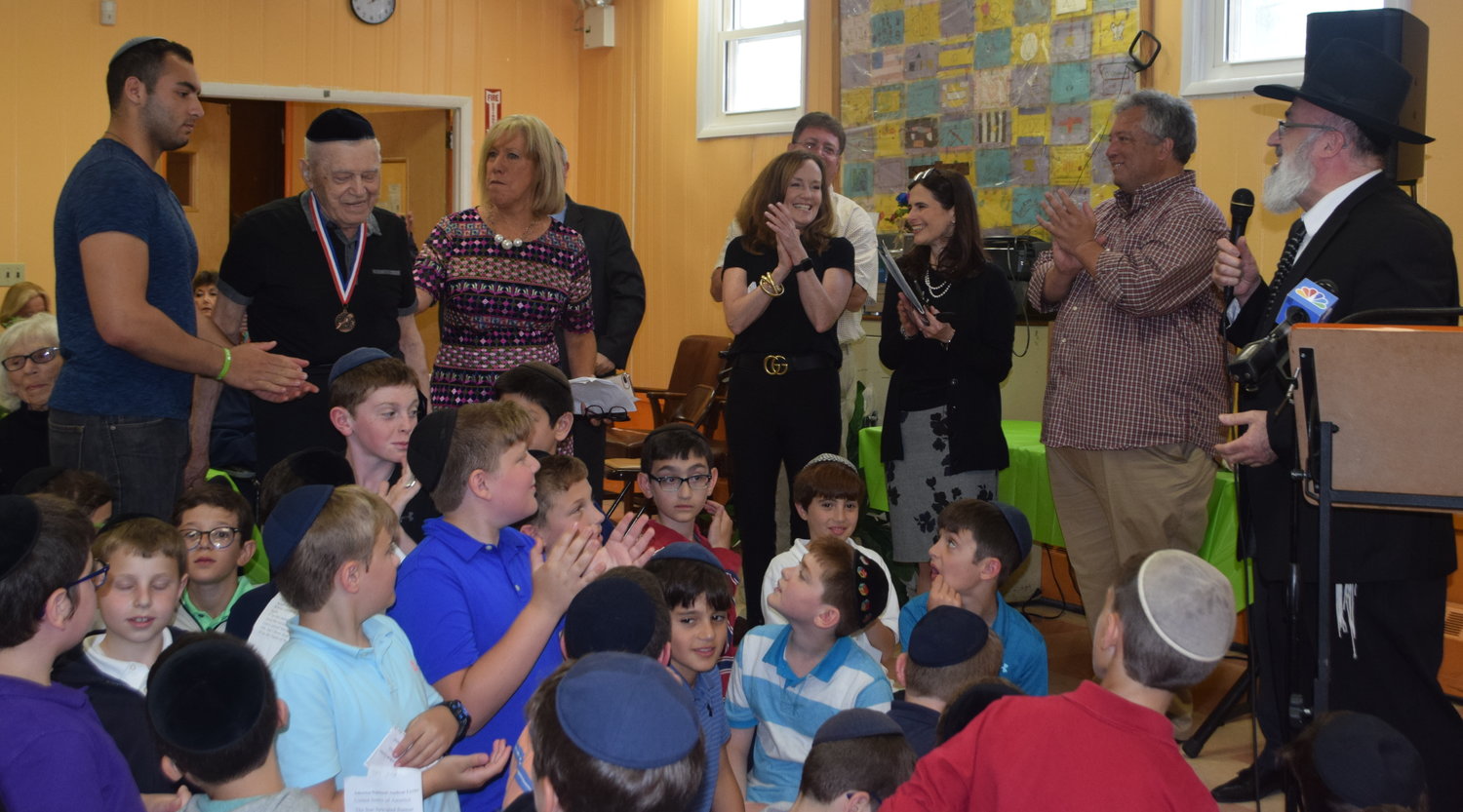 On the 75th anniversary of D-Day, another vestige of the World War II era was commemorated as the Cedarhurst-based Marion & Aaron Gural JCC honored one of its members, Marvin Jacobs, a Holocaust survivor.

Jacobs, 97, was born Monyik Yakubovich in Slominki, Poland in 1922, and spent a majority of the war years in seven concentration camps. His six siblings, three brothers and three sisters all died. He was liberated from Buchenwald. “I survived,” he said three times as he spoke to reporters at the JCC on June 6. “I’m grateful to God, I’m blessed.”

He settled in Brooklyn when he came to the United States, and drove a taxi. He now lives with his daughter in Woodmere. He had difficulty hearing as a young man, but works to remain as healthy as possible walking a treadmill daily for two hours, he said. “He’s the epitome of what it is to be a survivor,” his son David Jacobs said.

Congresswoman Kathleen Rice, who represents the Five Towns, presented Jacobs with a medal and a certificate. Rice also noted that the day was the diamond anniversary of D-Day and melded the military operation with a remembrance of the Holocaust.

“So today as we celebrate those who survived the most horrific genocide in human history, we also remember the six million men, women and children who did not,” she added. “And as we mark the anniversary of our liberation of Europe we reaffirm our commitment to never again waiting until it’s too late.”

Rabbi Tzvi Krigsman the principal of Yeshiva Ketana of Long Island in Inwood was accompanied by the fifth-grade boys who sang the “Star Spangled Banner” and “Hatikvah” considered both the Jewish and Israeli national anthem.

“We appreciate everything you’ve done,” Krigman said, noting that Jacobs’ youthful athletic talent of being a fast runner was more than likely not recognized because of anti-Semitism. “We recognize we are in a country that has equality for all, recognition for all and tolerance for all. We wish you much nachas.” Nachas is Yiddish for pride or congratulations for someone’s achievements.
Report an inappropriate comment