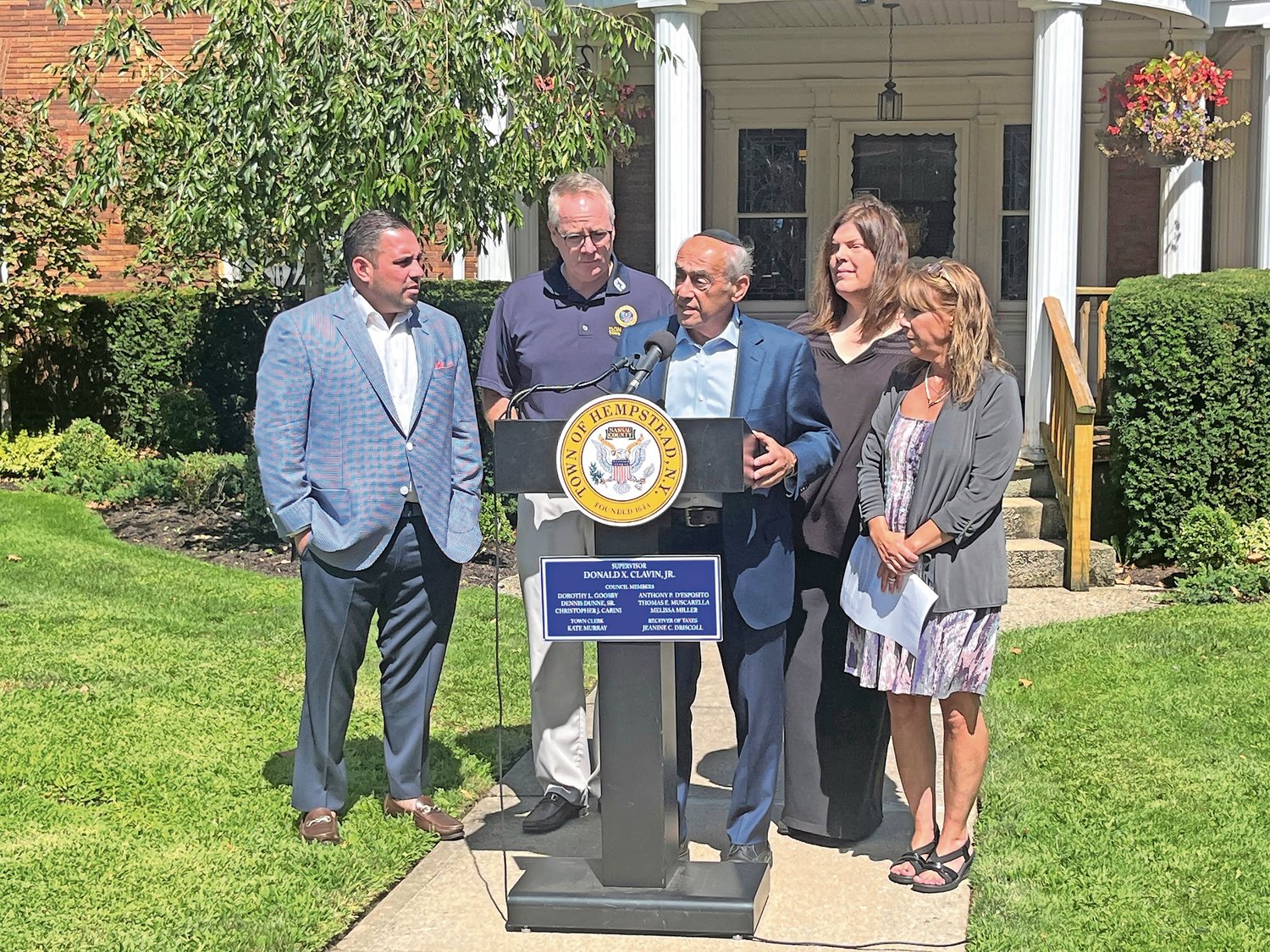 The development zones provide for varying levels of building density, ranging from 15 units per acre up to 60 units. The zones include different types of construction, including attached single-family homes, multi-family dwellings and mixed-use development — business uses on the ground floor and residential units above. The zones straddle the Nassau Expressway in communities north of the Village of Lawrence.

The Residential Townhouse/Rowhouse District covers roughly 42 acres of property that straddle the Nassau Expressway in North Lawrence and Inwood. The zone permits single-family attached dwellings with a development density of no more than 15 units per acre.

On Tuesday, Town of Hempstead officials held a news conference outside Lawrence Village Hall, and announced a public hearing — on Sept. 20, at 7 p.m. — to address concerns about building development zones in Inwood and North Lawrence.

Over the past month, many Five Towns residents say they have become increasingly worried about the impact of increased development in the area — such as the proposed projects at the Woodmere Club, and those that have been approved for Pearsall Avenue in Cedarhurst and the Lawrence Woodmere Academy — on traffic, parking, the environment and overall quality of life.

“Residents have raised valid concerns regarding local development zones in North Lawrence and Inwood that merit serious consideration by the Hempstead Town Board,” Town Supervisor Don Clavin, who attended the news conference, said in a statement. “Therefore, we will be holding a public hearing to consider those legitimate concerns and potential adverse impacts associated with the existing zones.”

The hearing was purposely scheduled at night, not during the day when most people are working, so that residents can attend, Clavin noted.

The hearing, which will be held at Hempstead Town Hall, at 1 Washington St., will address Transit Oriented Development Districts, the Neighborhood Business Overlay District and the Residential Townhouse/Rowhouse Overlay District, all in the Five Towns.

“We want to hear from the residents of the Five Towns to ensure that any development that occurs in the area is consistent with the residential character of the surrounding neighborhoods,” Town Councilman Anthony D’Esposito said in a statement, “and we want to take a very thorough look at the issues of traffic, parking and environmental impacts.”

Many Five Town and Rockaway residents planned to attend a meeting Tuesday night, after the Herald went to press, at the Lawrence Yacht & Country Club. There, meeting organizers planned to call for a moratorium on development until the Nassau Expressway is further developed. The meeting gave residents a chance to express their concerns to local officials, as will the Sept. 20 public hearing.

“This construction in the area is going to have a devastating effect,” Lawrence Mayor Alex Edelman said at the news conference, adding, “There are certain circumstances that will be done to correct the situation.”