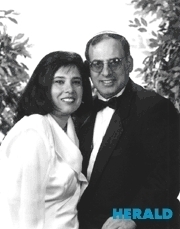 By:Rebecca Shalomoff
Hundreds attend memorial service for Blaustein at synagogue
The grieving husband of Sara Blaustein, the former Lawrence resident who was brutally murdered in a drive-by shooting in Israel in May, recounted for a hushed audience last week how his wife was mortally wounded.
For the first time, Norman Blaustein spoke out publicly in detail about the fatal shooting during a memorial service for his wife at Congregation Beth Sholom in Lawrence, Tuesday, June 26.
Blaustein described for a stunned audience events leading up to his wife's murder. In the car were the Blausteins, son Sammy Berg, who was visiting from Long Beach, and Esther, an Israeli hitchhiker they had picked up along the way.
Norman, who was in the driver's seat, was discussing a passage from the Torah with his wife on their way to Jerusalem to pray at the Wailing Wall. All of a sudden, he heard a crackling sound like aluminum foil.
My glasses flew off my eyes, and blood was gushing out of my nose,he said. I reached over to the cell phone and called my brother-in-law for help. I looked over and saw that my wife had a smile on her face, and her eyes were closed.
He said the ambulance arrived quickly enough for paramedics to help his wife begin breathing again, but she was only able to breath for five more minutes before she died.
Norman Blaustein was grazed by a bullet, which damaged his vision and hearing. Berg, who spoke at the service with his arm in a sling, was hit in the arm and shoulder. Esther died from gun shot wounds to her chest. The gunmen, reportedly Palestinians, singled out the car because it had Israeli plates.
It was a Tuesday, the 29th day in May. On the Hebrew calendar, Blaustein was murdered on the 7th day in the month of Sivan. Jews living outside of Israel were celebrating the second day of Shavuot, the holiday commemorating the time the Jewish people first received the Torah.
Earlier in the day, Ms. Blaustein visited the tomb of the matriarch, Rachel in Hebron, as she did every Tuesday since she moved to Israel nine months ago with her husband and their 13-year-old daughter Atara. On that day, she and her husband had just purchased a Torah to be presented to the newest synagogue recently built in Efrat, where they lived. The family made the move to the Jewish settlement and became Israeli citizens when the recent Intifada broke out.
The atmosphere inside the sanctuary of Congregation Beth Sholom last Tuesday night was heavy with sorrow as hundreds of mourners came together to grieve the loss of Blaustein. Mournful prayers were sung, many tears were shed and relatives of Blaustein shared their joys of knowing her and the sadness in losing her.
They said she was the model Aishes Chayil,the Hebrew term for a woman of valor. Giving, kind and loving, Blaustein was always prepared to welcome guests. When purchasing a home in Efrat, the Israeli settlement in between Hebron and Jerusalem, she made sure there were extra bedrooms for visiting friends.
Yoni Berg, also of Long Beach, likened his mother to the Jewish matriarch, Sarah. The wife of Abraham, Sarah was known for her acts of chessed, or generosity. When the three angels visit Abraham, Sarah is in the ohel (tent) preparing for guests.
In memory of Blaustein, a Jewish learning complex called Ohel Sara will be built in Efrat. Blaustein had a deep love for Torah study, her family said. When she moved from Staten Island to Lawrence to Efrat, she always signed up for Jewish classes. Ohel Sara will be a center for advanced Torah study for men and women on Efrat's northernmost boundary, bordering Bethlehem.
It will forever stand as a Jewish response to those who murdered her only because she was a Jew,her children wrote in a letter distributed at the memorial service. This Torah center will show our commitment to strengthening the Judaism our mother loved.
In his eulogy, Sammy Berg also noted that the Torah deliberately points out the place where Sarah died to insure that no one would dispute that Hebron belongs to the Jewish people. Similarly, he said that his mother's death on the road to Jerusalem should make sure that Efrat will be ours.
Ohel Sara will be built eye's distance from where she was murdered, her husband said.
I can't think of a better place to remember my wife,he said. It will be there to avenge my wife's murder and to protect the road from Efrat to Jerusalem.
Rabbi Kenneth Hain, spiritual leader of Congregation Beth Sholom, relayed a story told to him by Ms. Blaustein, a former congregant. When she planned her move to Israel, a friend asked her, Why? With all the violence, her friend wanted to know why she would ever want to subject herself to it.
Ms. Blaustein simply replied, Why not? It was her long-held dream to live in Israel, the homeland of the Jewish people. No threat of danger could prevent her from fulfilling her dream, the Rabbi said.
Her husband, who will continue to reside in Efrat with Atara, told the audience how happy she was living in Israel. She always had on a smile from ear to ear,he said.
Rabbi Shlomo Riskin, the head rabbi of Efrat, urged audience members to visit Israel.
Send your children to us,he said. It's not Disneyland. It's the motherland. You must come when your mother is in trouble.
Adena Mark, Ms. Blaustein's daughter, said I believe that my mother's death was to teach us to love Torah and to have a presence of Jews in Israel.
So far, the family has raised more than $200,000 for the Ohel Sara learning complex. Anyone who wishes to contribute to the building of the complex may send donations to: Ohel Sara, 18 Pine St., Woodmere, N.Y., 11598.