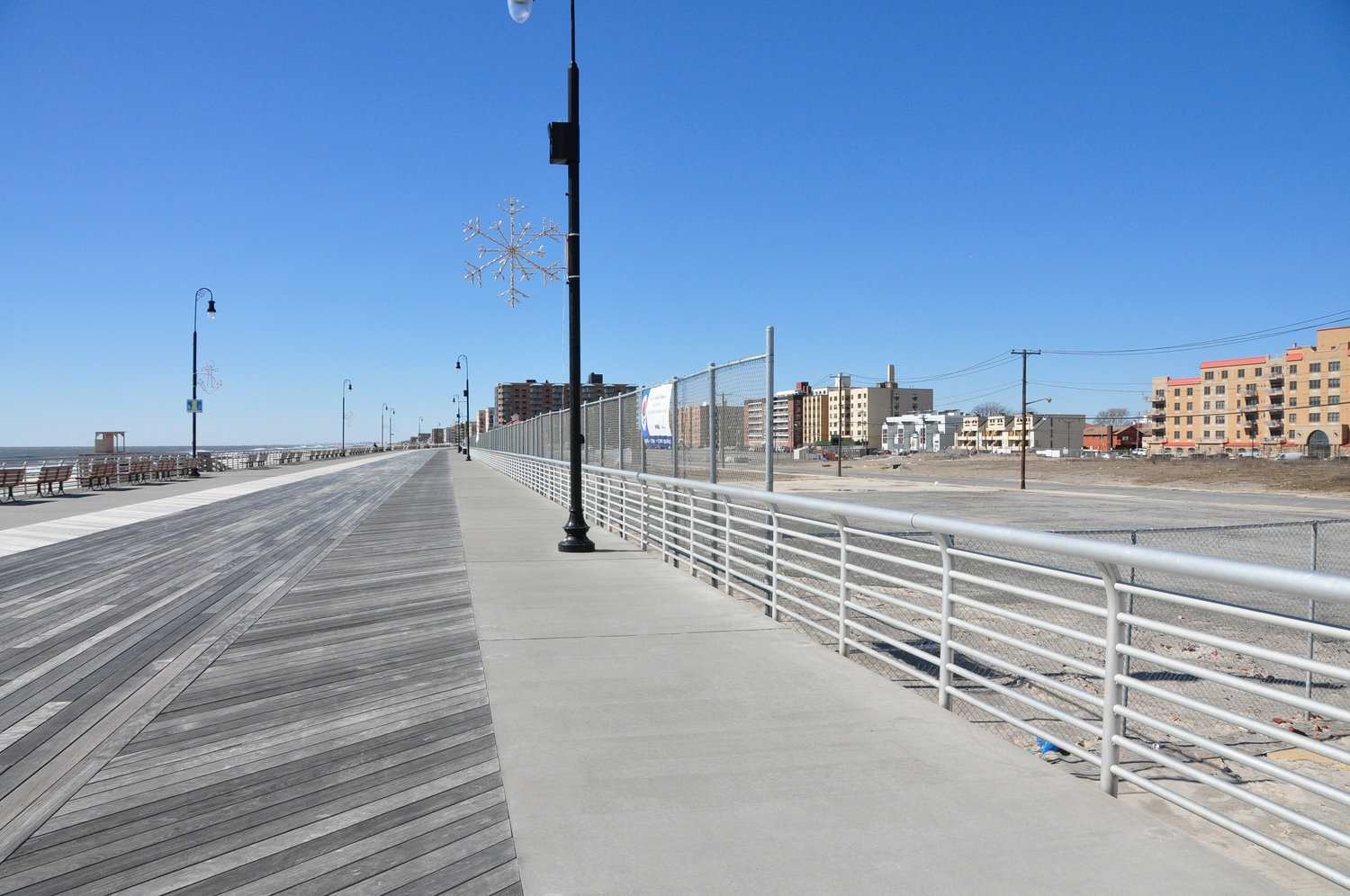 On Dec. 13, Nassau County State Supreme Court Judge Stephen Bucaria upheld a Zoning Board of Appeals decision to revoke a building permit issued to the developer of the Superblock property for two oceanfront apartment towers.
Christina Daly/Herald
By Anthony Rifilato

In what officials called a win for the city, a Nassau County State Supreme Court judge has upheld a decision by the Zoning Board of Appeals last May to revoke a building permit issued to the developer of the Superblock property.
In a Dec. 13 ruling, Judge Stephen Bucaria denied an appeal filed in June by the developer, iStar Financial, to reverse the zoning board’s decision, saying that the developer failed to obtain all necessary permits after it received approval from the board in 2014 to build two 15-story luxury oceanfront apartment towers and retail space along the boardwalk.
The zoning board, which filed a motion to dismiss iStar’s appeal, had voted unanimously to revoke the building permit after a group of residents filed a lawsuit in 2017 claiming that the permit was invalid.
The lawsuit sought to revoke the permit, which was issued to the developer in May 2015 and extended twice — actions that the suit claimed were invalid because a variance issued in 2014 had expired.
Last year’s vote by the zoning board came as welcome news to many residents, who had criticized iStar representatives for telling the zoning board in 2014 that the developer could begin construction shortly after a variance was approved — and that the project would generate $4.8 million per year in property tax revenue — and then claiming that it needed more than $100 million in tax breaks to move forward with the project. The developer was twice rejected by the Nassau County Industrial Development Agency when it applied for tax breaks of up to $129 million, in the form of payments in lieu of taxes, or PILOTS.


“It’s an enormous win,” Rob Agostisi, the city’s corporation counsel, said of Bucaria’s ruling. “[The permit] was rescinded because it had expired under its own terms. There was plain language in the variance, and the zoning board applied the law to the facts.”
A month before the zoning board revoked the building permit, iStar filed a lawsuit against the city for more than $100 million, claiming that the city had reneged on an agreement in which it would support tax incentives. Agostisi said that Bucaria’s ruling “could only have a positive impact on that case, and we expect it to.”

Approval given five years ago
In February 2014, the zoning board voted 5-1 to grant iStar a height and density variance to develop a mixed residential and commercial development on the six-acre parcel between Riverside and Long Beach boulevards, East Broadway and the boardwalk, saying that it would revitalize property that has remained vacant for 30 years.
The $400 million project included two buildings atop a two-level parking garage — roughly 50 feet taller than the city’s height limit of 110 feet — with 522 one- and two-bedroom luxury rental apartments.
Under the conditions of the variance, iStar was required to obtain the necessary permits within nine months of the zoning board’s approval and commence construction within a year, or the variance would be revoked. In November 2014, the zoning board granted iStar an extension until the following May.
The developer filed an application that spring for a permit to begin work on the foundation, city officials said, and on May 28, 2015, it received approval from the city’s building commissioner, Scott Kemins. According to court documents, the Building Department granted iStar at least two extensions for the foundation permit. The Building Department’s most recent extension was to run through May 2018.
In 2017, residents Michael and Rianna Goldshall, Republican former City Councilwoman Mona Goodman, William Haas, Christopher Jones, James Kirklin, Boguslaw Pawlowicz and Leah Tozer filed suit in Nassau County State Supreme Court against the zoning board, Kemins, and Shore Road Long Beach Superblock LLC, a subsidiary of iStar.
Kirklin, who lives on Riverside Boulevard, argued that iStar was no longer entitled to the building permit and would have to go before the zoning board to obtain a new variance. The lawsuit claimed that no construction plans were submitted for the towers, and also forced the zoning board to hold a public hearing.
Attorneys representing the residents, including former U.S. Sen. Al D’Amato, argued at a hearing last April that iStar was not entitled to the latest extension because the variance was void, and that the developer had failed to secure additional permits for construction.
At the hearing, zoning board trustees pressed attorneys representing iStar and questioned the developer’s efforts to move the project forward, saying that little progress had been made. Though the board said it could not consider iStar’s requests for tax breaks in its decision, some trustees said that in 2014, the developer had made no mention of a need for tax incentives.
In its appeal, iStar argued that it had a right to the permit because it had begun construction in 2015 by excavating the site and pouring four-inch concrete slab for the foundation; and that its time to satisfy the permit conditions had not yet expired.
The developer also claimed that it was denied a fair hearing, and that the zoning board “bowed to local political opposition” against the project and violated the state open-meetings law by not deliberating publicly. IStar called for the permit and variances to be reinstated, and for the zoning board to be compelled to hold another public hearing.
But Bucaria disagreed, saying that iStar offered no evidence that the board violated the open-meetings law, and that the developer had a vested interest in the property and could not establish that the board bowed to political pressure. He also said that iStar did not have a “clear legal right” to a public hearing.
Additionally, he wrote: “The decision … [by the] zoning board is neither arbitrary nor capricious and is supported by substantial evidence. All necessary permits were not obtained within nine months, or within the six month extension which was granted.”
An attorney for iStar did not return a call requesting comment. The developer is expected to appeal Bucaria’s decision to the New York State Appellate Division.

Editor's note: This story originally appeared in the Jan. 3-9 print edition of the Long Beach Herald.
Report an inappropriate comment