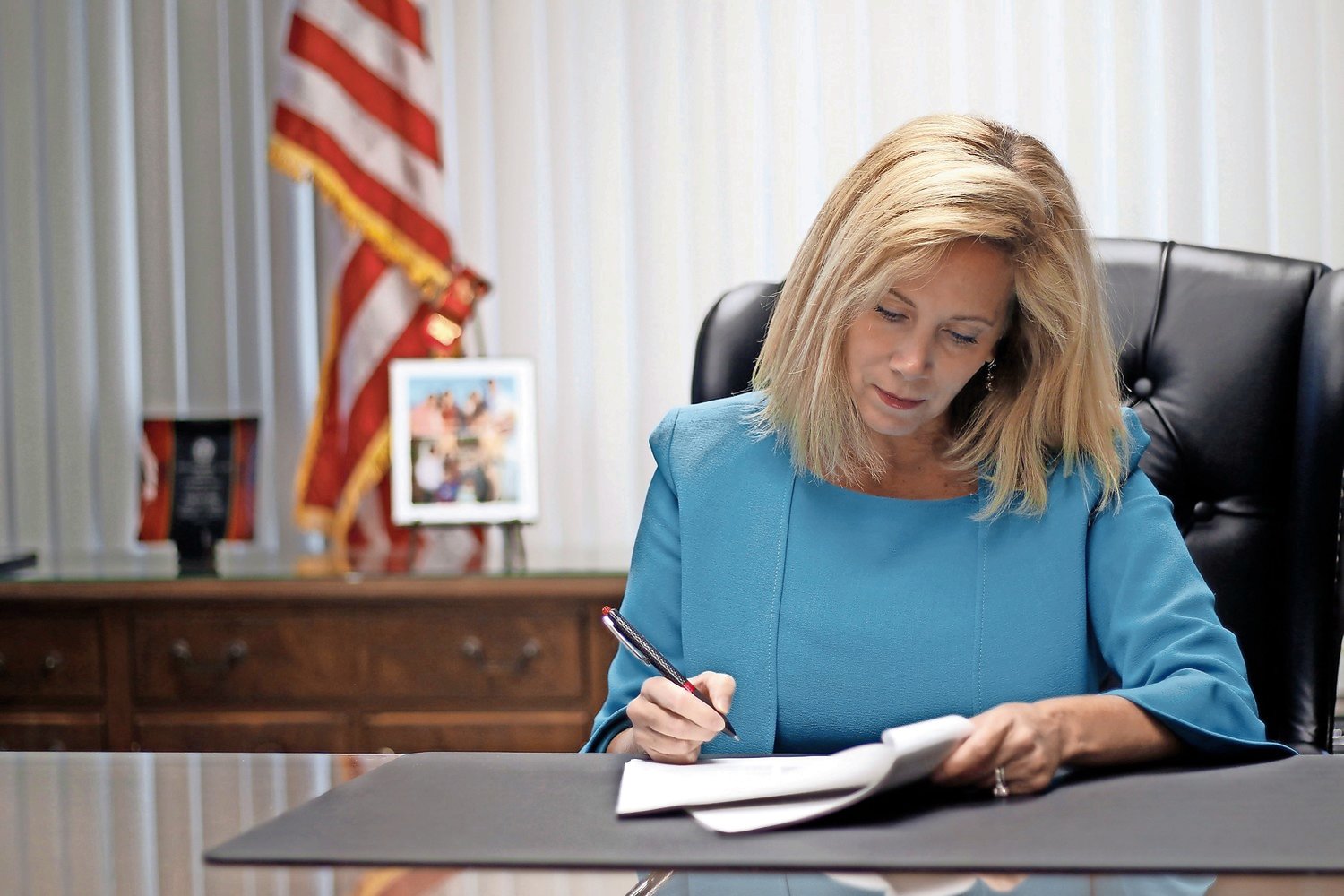 Former Hempstead Town Supervisor Laura Gillen sat down with the Herald last Friday to discuss the highs and lows of her two years as the first Democratic leader of America’s largest township in 112 years.
Christina Daly/Herald
By Alyssa Seidman

When Laura Gillen refused to concede in the race for her re-election to the highest seat in the Town of Hempstead, few were surprised. Much like her first term as supervisor, Gillen, a Democrat from Rockville Centre, kept her faith in the democratic process until all the absentee ballots were counted.

After Donald Clavin, a Republican from Garden City, was declared victorious by a margin of 1,650 votes, Gillen continued to show up to Town Hall, determined to finish her work as the first Democratic leader of America’s largest township in 112 years.

“Obviously, I’m disappointed — I was really proud of the work that my administration did,” Gillen said in an interview with the Herald last Friday. “We found a town that was stuck in time, frozen in the ’70s and ’80s. The focus was: ‘How can we improve things, how can we save residents money and deliver better services to residents?’”

The mid-morning conversation at Rockville Centre’s Pantry Diner delved into the adversarial tactics that Gillen experienced as supervisor. At town meetings, the board often blocked Gillen’s initiatives from debate, and accusations of political games flew from both sides almost weekly. When she put forward a resolution to refinance the town’s debt — a move that would save taxpayers millions of dollars — Gillen said the Republicans threatened to block the measure since it was done without their knowledge. And at a news conference in August 2018, Gillen tore up a resolution that she said was negotiated in secret between Town Board members and the town’s labor union that would have amounted to almost $800,000 in additional raises for “politically appointed insiders — not the rank and file.”

“Sometimes [the vote] was always six to one, and I was the one,” Gillen said. “Someone who was speaking for the people and trying to push forward good government initiatives.”

A force for change

Last February, the town approved a new third-party workers compensation administrator after Gillen discovered that the decades-old contract with Claim Services Bureau of New York, the previous vendor, had not been put out to bid since the 1970s.

“That’s just one example of the inertia, of the waste, of the lack of caring that we found so prevalent throughout the Town of Hempstead,” said Gillen, who before assuming public office worked as an attorney. “This was a government that was previously operated primarily to benefit insiders, to give out contracts and jobs to friends and family.”

As supervisor, Gillen sought to change that.

During her term, Gillen passed transparency legislation requiring all town contracts, budgets and other audited financials be scanned and made available online. She dedicated more than $59 million in her capital plan toward fixing roads, introduced new information-technology infrastructure to bring Town Hall into the digital age and eventually refinanced the town’s debt.

“I inherited a budget that was out of whack by about $2.4 million on the day I walked in, but because of strong, tight fiscal controls, I was able to not only not raise taxes, but lower taxes,” she said.

Gillen beamed as she reflected on one of the accomplishments of her term: expanding Camp ANCHOR in Lido Beach. The town camp serves the special-needs community, and Gillen volunteered there while growing up in Baldwin. The creation of the middle camp in 2019 removed nearly 60 people from its waiting list.

A priority of Gillen’s capital plan was to support the resurrection of the town’s water testing lab in Point Lookout, which was shuttered after Hurricane Sandy. Using grants from the state and the Long Island Regional Planning Council, the town began repairing the lab, which is set to open later this year. Gillen’s administration also oversaw the expansion of the town’s shellfish hatchery, which added millions of oysters and clams to local waterways to filter and reduce pollution.

Her administration is also credited with approving the construction of a playground at Wynsum Avenue Park in Merrick, which was contested during the prior supervisor’s term, and securing a $10 million state grant to advance Baldwin’s downtown revitalization project.

After her historic win, Gillen attempted to forge a bipartisan coalition with Councilman Bruce Blakeman and former Councilwoman Erin King Sweeney to ensure the board could work together in the name of “good government.” That goal was undermined, however, once Gillen took office.

The council members “started to realize that the supervisor’s power is very limited; really almost all the power lies in the board as a whole,” Gillen said. “Anything I do, they can undo by board resolution.

When Clavin, who was the town’s receiver of taxes, announced his candidacy for supervisor, he criticized Gillen’s stance on fiscal matters. In October 2018, Gillen proposed a budget plan that would have slightly cut taxes for most residents, but the town board rejected it and introduced its own plan to cut taxes by $11 million. Clavin publicly supported the Republicans’ plan in the run-up to the vote and said Gillen’s no vote went against residents’ interests. Gillen told the Herald, however, that the savings in the board’s budget was based on a system that predicts how many employees will retire, which she said in the past had proved unreliable.

Clavin’s criticism of Gillen’s financial handlings was the central theme of multiple mailers his campaign sent before the 2019 election, which accused Gillen of voting against a tax cut. “They lied about my record, they distorted my record, they also tried to defraud the voters and make them think I was Laura Curran and I did reassessment,” Gillen said. “Town of Hempstead has nothing to do with reassessment.”

Gillen blames her loss not on her lack of political experience, or her refusal to play politics. “The only thing I could have done differently to get re-elected was to just lay down and let [the Republicans] run the town, but that wasn’t what I was elected for,” she said. “I was elected to stand up for the people, and that’s what I did. So I wouldn’t change a thing about that.”

Now that her term is over, Gillen is spending time with her family and deciding what’s next. She mentioned continuing a role in public service, or starting a private law practice. As for running for public office again, “It’s certainly not something I’m ruling out.”

She added that Clavin should prioritize the ushering of Baldwin’s downtown revitalization project, conducting an audit of the town’s building department and complying with the federal subpoena to further examine the Dover Group, which leases town property.

As for the residents, Gillen had this to say: “Pay attention to what’s going on in local government, and don’t lose heart.”

Erik Hawkins and Anthony O’Reilly contributed to this story.